This is the third in a series of blog posts examining the technologies that are driving the development of modern web and mobile applications.

Part 1: Introducing The MEAN Stack (and the young MERN upstart) introduced the technologies making up the MEAN (MongoDB, Express, Angular, Node.js) and MERN (MongoDB, Express, React, Node.js) Stacks, why you might want to use them, and how to combine them to build your web application (or your native mobile or desktop app).

The remainder of the series is focused on working through the end to end steps of building a real (albeit simple) application. – MongoPop. Part 2: Using MongoDB With Node.js created an environment where we could work with a MongoDB database from Node.js; it also created a simplified interface to the MongoDB Node.js Driver.

This post builds on from those first posts by using Express to build a REST API so that a remote client can work with MongoDB. You will be missing a lot of context if you have skipped those posts – it's recommended to follow through those first.

A Representational State Transfer (REST) interface provides a set of operations that can be invoked by a remote client (which could be another service) over a network, using the HTTP protocol. The client will typically provide parameters such as a string to search for or the name of a resource to be deleted.

Many services provide a REST API so that clients (their own and those of 3rd parties) and other services can use the service in a well defined, loosely coupled manner. As an example, the Google Places API can be used to search for information about a specific location:

Breaking down the URI used in that curl request:

There's a convention as to which HTTP method should be used for which types of operation:

Mongopop's REST API breaks this convention and uses POST for some read requests (as it's simpler passing arguments than with GET).

These are the REST operations that will be implemented in Express for Mongopop:

Express is the web application framework that runs your back-end application (JavaScript) code. Express runs as a module within the Node.js environment.

Express can handle the routing of requests to the right functions within your application (or to different apps running in the same environment).

You can run the app's full business logic within Express and even use an optional view engine to generate the final HTML to be rendered by the user's browser. At the other extreme, Express can be used to simply provide a REST API – giving the front-end app access to the resources it needs e.g., the database.

Downloading, running, and using the application

The application's Express code is included as part of the Mongopop package installed in Part 2: Using MongoDB With Node.js.

What are all of these files?

A reminder of the files described in Part 2:

Other files and directories that are relevant to our Express application:

The rest of the files and directories can be ignored for now – they will be covered in later posts in this series.

The new REST API (implemented in routes/pop.js) uses the javascripts/db.js database layer implemented in Part 2 to access the MongoDB database via the MongoDB Node.js Driver. As we don't yet have either the Angular or React clients, we will user the curl command-line tool to manually test the REST API.

The config module can be imported by other parts of the application so that your preferences can be taken into account.

expressPort is used by bin/www to decide what port the web server should listen on; change this if that port is already in use.

client contains defaults to be used by the client (Angular or React). It's important to create your own schema at Mockaroo.com and replace client.mockarooUrl with your custom URL (the one included here will fail if used too often).

This is mostly boiler-plate code to start Express with your application. This code ensures that it is our application, app.js, that is run by the Express server:

This code uses the expressPort from config.js as the port for the server to listen on; it will be overruled if the user sets the PORT environment variable:

This file defines the app module ; much of the contents are boilerplate (and covered by comments in the code) but we look here at a few of the lines that are particular to this application.

Make this an Express application:

Define where the views (templates used by the Jade view engine to generate the HTML code) and static files (files that must be accessible by a remote client) are located:

Create the /pop route and associate it with the file containing its code (routes/pop.js):

This file implements each of the operations provided by the Mongopop REST API. Because of the the /pop route defined in app.js Express will direct any URL of the form http://<mongopop-server>:3000/pop/X here. Within this file a route handler is created in order direct incoming requests to http://<mongopop-server>:3000/pop/X to the appropriate function:

As the /pop route is only intended for the REST API, end users shouldn't be browsing here but we create a top level handler for the GET method in case they do:

This is the first time that we see how to send a response to a request; res.json(testObject); converts testObject into a JSON document and sends it back to the requesting client as part of the response message.

The simplest useful route path is for the GET method on /pop/ip which sends a response containing the IP address of the back-end server. This is useful to the Mongopop client as it means the user can see it and add it to the MongoDB Atlas whitelist. The code to determine and store publicIP is left out here but can be found in the full source file for pop.js.

We've seen that it's possible to test GET methods from a browser's address bar; that isn't possible for POST methods and so it's useful to be able to test using the curl command-line command:

The GET method for /pop/config is just as simple – responding with the client-specific configuration data:

The results of the request are still very simple but the output from curl is already starting to get messy; piping it through python -mjson.tool makes it easier to read:

The simplest operation that actually accesses the database is the POST method for the /pop/countDocs route path:

database is an instance of the object prototype defined in javascripts/db (see The Modern Application Stack – Part 2: Using MongoDB With Node.js) and so all this method needs to do is use that object to:

Once more, curl can be used from the command-line to test this operation; as this is a POST request, the --data option is used to pass the JSON document to be included in the request:

curl can also be used to test the error paths. Cause the database connection to fail by using the wrong port number in the MongoDB URI:

Cause the count to fail by using the name of a non-existent collection:

The POST method for the pop/sampleDocs route path works in a very similar way:

The POST method for pop/updateDocs is a little more complex as the caller can request multiple update operations be performed. The simplest way to process multiple asynchronous, promise-returning function calls in parallel is to build an array of the tasks and pass it to the Promise.all method which returns a promise that either resolves after all of the tasks have succeeded or is rejected if any of the tasks fail:

The final method uses example data from a service such as Mockaroo to populate a MongoDB collection. A helper function is created that makes the call to that external service:

That function is then used in the POST method for /pop/addDocs:

This method is longer than the previous ones – mostly because there are two paths:

So far, we've used the Chrome browser and the curl command-line tool to test the REST API. A third approach is to use the Postman Chrome app: 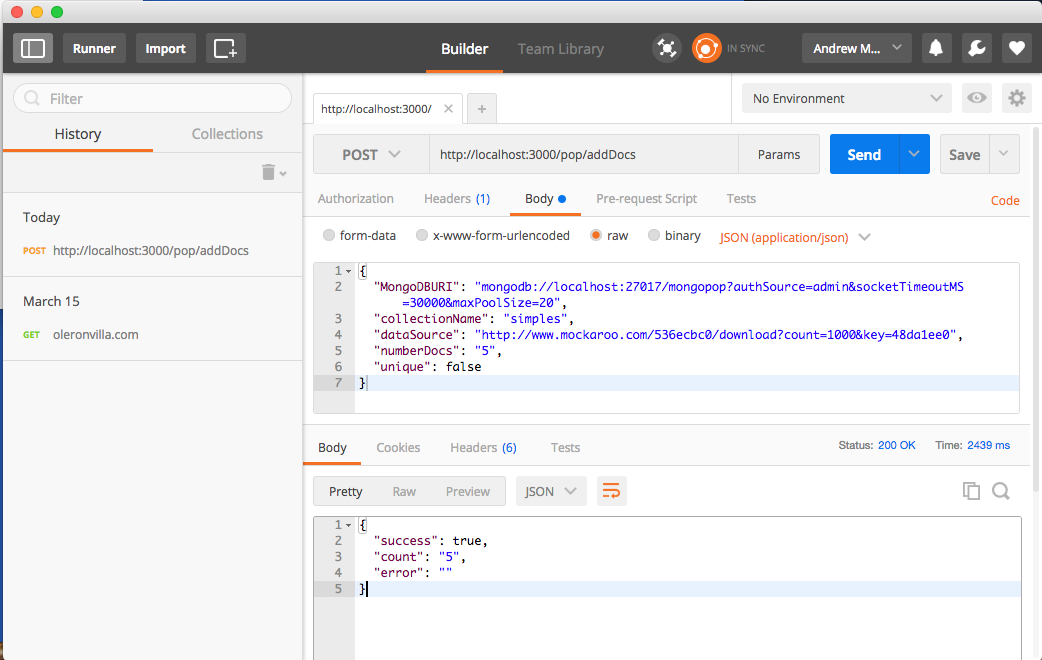 One way to debug a Node.js application is to liberally sprinkle console.log messages throughout your code but that takes extra effort and bloats your code base. Every time you want to understand something new, you must add extra logging to your code and then restart your application.

Developers working with browser-side JavaScript benefit from the excellent tools built into modern browsers – for example, Google's Chrome Developer Tools which let you:

Fortunately, you can use the node-debug command of node-inspector to get a very similar experience for Node.js back-end applications. To install node-inspector:

node-inspector can be used to debug the Mongopop Express application by starting it with node-debug via the express-debug script in package.json:

To run the Mongopop REST API with node-debug, kill the Express app if it's already running and then execute:

Note that this automatically adds a breakpoint at the start of the app and so you will need to skip over that to run the application. 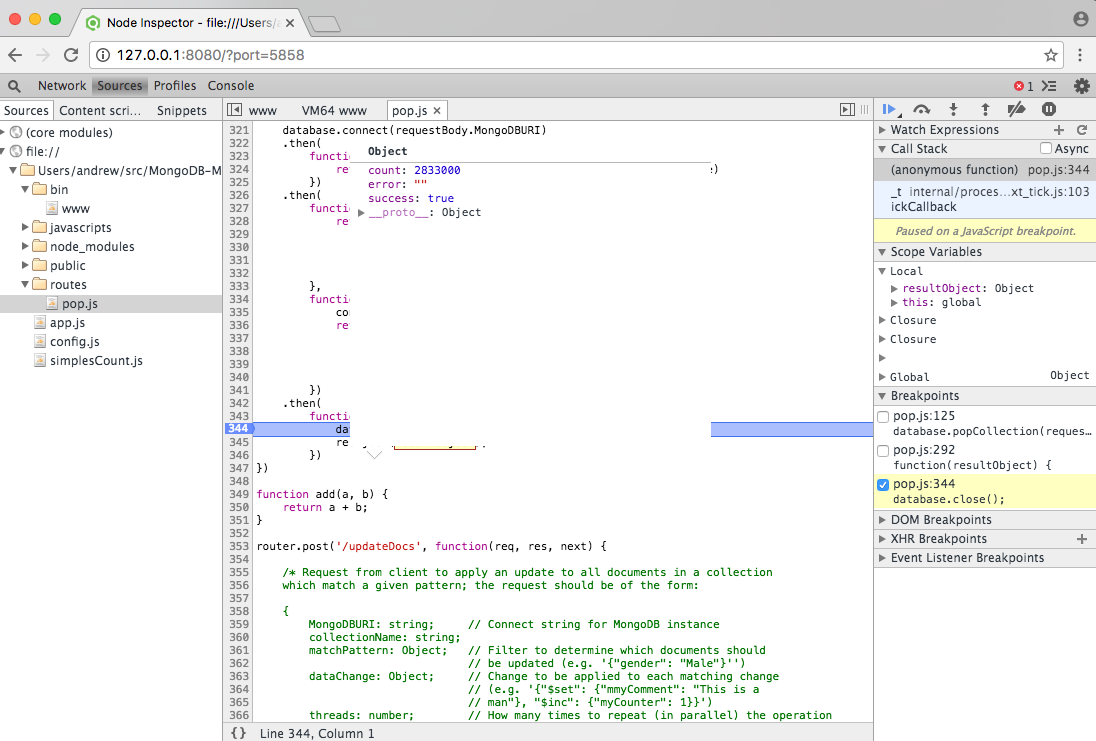 Depending on your version of Node.js, you may see this error:

If you do, apply this patch to /usr/local/lib/node_modules/node-inspector/lib/InjectorClient.js.

Summary & what's next in the series

Part 1: Introducing The MEAN Stack provided an overview of the technologies that are used by modern application developers – in particular, the MERN and MEAN stacks. Part 2: Using MongoDB With Node.js set up Node.js and the MongoDB Driver and then used them to build a new Node.js module to provide a simplified interface to the database.

This post built upon the first two of the series by stepping through how to implement a REST API using Express. We also looked at three different ways to test this API and how to debug Node.js applications. This REST API is required by both the Angular (Part 4) and React (Part 5) web app clients, as well as by the alternative UIs explored in Part 6.

The next part of this series implements the Angular client that makes use of the REST API – at the end of that post, you will understand the end-to-end steps required to implement an application using the MEAN stack.

Continue to follow this blog series to step through building the remaining stages of the MongoPop application:

A simpler way to build your app – MongoDB Stitch, Backend as a Service

MongoDB Stitch is a backend as a service (BaaS), giving developers a REST-like API to MongoDB, and composability with other services, backed by a robust system for configuring fine-grained data access controls. Stitch provides native SDKs for JavaScript, iOS, and Android.

MongoDB Stitch allows you to compose multi-stage pipelines that orchestrate data across multiple services; where each stage acts on the data before passing its results on to the next.

Unlike other BaaS offerings, MongoDB Stitch works with your existing as well as new MongoDB clusters, giving you access to the full power and scalability of the database. By defining appropriate data access rules, you can selectively expose your existing MongoDB data to other applications through MongoDB Stitch's API.

If you'd like to try it out, step through building an application with MongoDB Stitch.

If you're interested in learning everything you need to know to get started building a MongoDB-based app you can sign up for one of our free online MongoDB University courses.

Sign up for M101JS: MongoDB for
Node.js Developers today!

Testing Linearizability with Jepsen and Evergreen: “Call Me Continuously!”