Heroku and MongoDB Atlas are the perfect fit for modern, cloud-based app development and deployment. Since its inception in 2007, Heroku has been a PaaS (Platform-as-a-Service) favorite of developer and operations teams thanks to its tight integration to CI tools and ease of app deployment. MongoDB is also a long-time favorite of developers who value increasing their productivity and decreasing application development cycles. MongoDB’s fully managed DBaaS (Database-as-a-Service), Atlas, is also popular among cloud DevOps teams, who are naturally demanding a strong integration between Heroku and MongoDB Atlas.

Today, we are happy to present a tutorial showcasing how to securely integrate Heroku with MongoDB Atlas.

Companies hosting their MongoDB Atlas-backed applications on Heroku typically require that their data be only accessed by their applications. This has proved to be challenging in most Heroku deployments, which typically don’t offer guarantees that requests performed by their hosted applications originate from fixed IPs or a fixed range of IPs (defined as CIDR blocks).

The tutorial below goes through the specific steps required to link a Heroku Private Space with a MongoDB Atlas project.

The first step is to initiate the VPC Peering request on the Atlas side. To do so, it’s necessary to retrieve a few parameters from the Heroku Private Space, by using the Heroku CLI. After logging in with an account having access to a Private Space, use the spaces:peering:info command to retrieve the AWS information required by MongoDB Atlas: 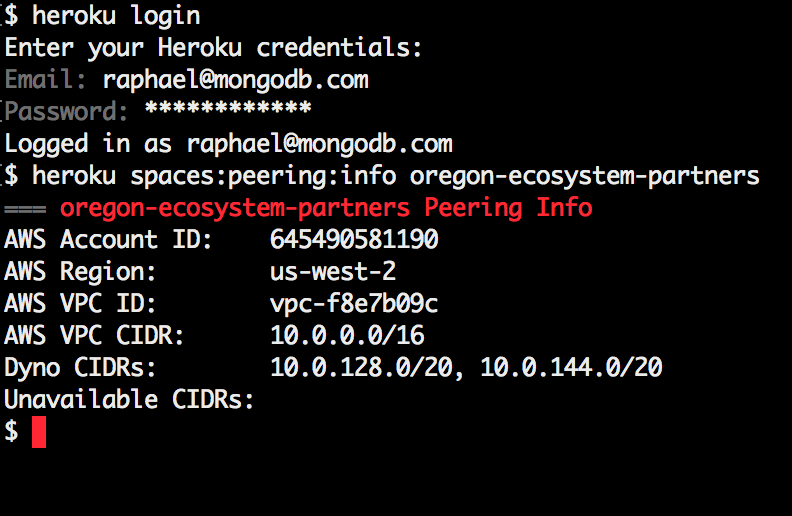 In the screenshot above, I chose to use a Private Space hosted in the us-west-2 AWS region (aptly prefixed "oregon-*"), since my M10 MongoDB Atlas cluster is also deployed in that region.

Now, head over the MongoDB Atlas website and navigate to the Security tab of your cluster (M10 or above and in the same region as your Heroku Private Space). Select the +New Peering Connection button and fill out the form with the values you previously copied: 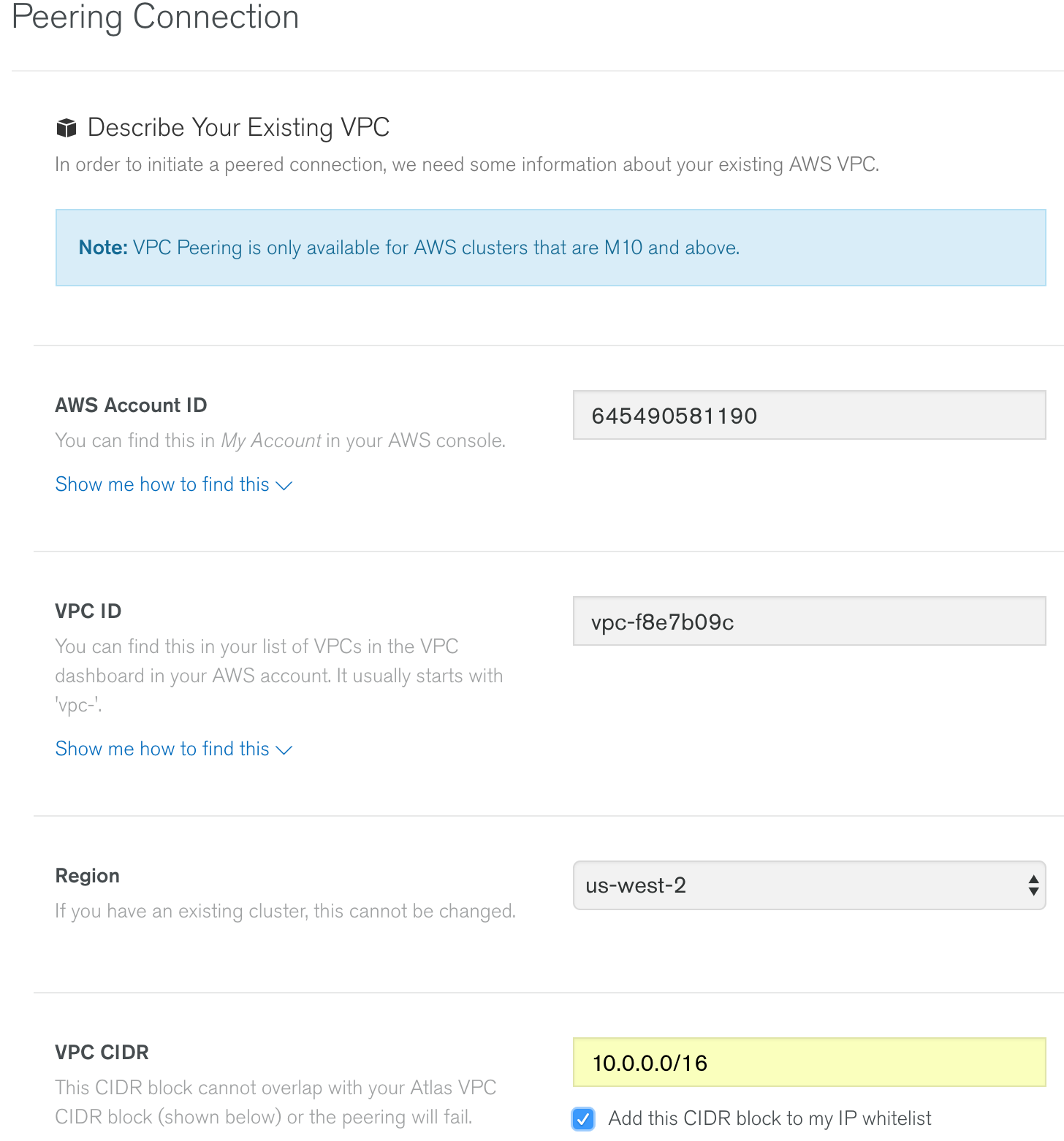 Press the Initiate Peering button, and verify that the VPC Peering request appears in Atlas’ VPC Peering list (with a "Waiting for Approval" status):

Now that the VPC Peering request has been initiated on the MongoDB Atlas side, let’s approve it on the Heroku side. In the Heroku console, the following command should display the request we just created in MongoDB Atlas:

Take note of the PCX ID value of your VPC Peering ID and pass it to Heroku space:peerings:accept command:

The first step to verify that VPC Peering has been properly set up between your Heroku Private Space and MongoDB Atlas is by running the following Heroku command again:

The peering connection should now appear as active.

In MongoDB Atlas, the peering connection should now also appear as available:

The next verification step would be to run an Heroku-deployed app connected to your MongoDB Atlas cluster and verify that you can read from or write to it.

For instance, you could clone this GitHub repository, customize its config.js file with your MongoDB Atlas connection string, and deploy its atlas-test branch to your Heroku Private Space using Heroku GitHub Deploys. Since Heroku automatically runs npm start for each Node-detected app, it will keep calling the produce.js script. As a result, documents should be created in the devices collection of a demo database in your Atlas cluster (if it doesn’t, I recommend that you first verify that the CIDR block of your Heroku Private Space is present in the IP Whitelist of your MongoDB Atlas cluster).

I hope that you found this Heroku-MongoDB Atlas integration tutorial useful. As next steps, I recommend the following:

Sign up for MongoDB Atlas if you don’t already use it.

MongoDB Atlas on Google Cloud Platform: Available across all regions

A wide variety of companies around the world, from innovators in the social media space to industry leaders in energy, are running MongoDB on Google Cloud Platform (GCP). Increasingly, these organizations are consuming MongoDB as a fully managed service with MongoDB Atlas , which boosts the productivity of teams that touch the database by reducing the operational overhead of setup, ongoing management, and performance optimization. When MongoDB Atlas became available on GCP last June, users were able to run it in 4 regions: us-east1 (South Carolina), us-central1 (Iowa), asia-east1 (Taiwan), europe-west1 (Belgium). This week we’re excited to launch the service across all Google Cloud Platform regions, allowing you to easily deploy and run MongoDB near you. Most GCP regions are made up of 3 isolated locations called zones where resources can be provisioned. MongoDB Atlas automatically distributes a 3-node replica set across the zones in a region, ensuring that the automated election and failover process can complete successfully if the zone containing the primary node becomes unavailable. For Atlas deployments in GCP’s Singapore region, which contains 2 zones instead of 3, it’s recommended that users enable Atlas’s cross-region replication to obtain a similar level of redundancy. Atlas is available across all GCP regions now. We’re excited to see what you build with MongoDB and Google services! Not an Atlas user yet? Get started <a href="https://www.mongodb.com/cloud/atlas?jmp=blog" target=_"BLANK">here .