Driving new digital opportunities in France and beyond

Today, digital growth is at the heart of most companies — particularly the four million French small businesses scattered across the country. Yet, half of these firms still lack an online presence. Solocal’s integrated offering allows these companies to instantly boost online activities and accelerate growth through new and better digital methods. Helping these organizations drive maximum digital presence enables them to build and develop digital relationships, retain customers, and find new ones. From restaurants to go-karting tracks, Solocal empowers thousands of businesses to do more with digital.

At the same time, Solocal is home to PagesJaunes, the French equivalent of the Yellow Pages directory site. Whether a user is looking for the number of a car garage, a post office, or a bank, PagesJaunes houses the details of these professionals across France, making them readily available in a few clicks. With more than 2.4 billion visits each year, the site is used by one in every two French web users and remains one of the most visited sites in the country.

Today, PagesJaunes is home to more than 4.9 million professional brands alongside access maps, historical commercial data, and user reviews. With the directory growing continuously, Solocal’s database, spearheaded by Software Architect David De Carvalho, needed to evolve to keep pace. Doing so would allow the PagesJaunes site to continue to drive a high output while delivering the trusted experience the country had come to expect.

“Over 2.4 billion visits each year - with everything from car garages, post offices and banks”

It was in 2013 as the directory really started to grow that PagesJaunes began work with MongoDB. With MongoDB initially installed on the company's own servers, De Carvalho and the team had acquired the skills to manage this database environment entirely on-premise. Storing everything from client accounts to business data, the deployment meant Solocal could drive a better customer experience from the start. With MongoDB, Solocal could drive a higher rate of availability, easier maintenance, and much better performance — particularly in terms of reading data, which still accounts for 95% of user queries today.

“Yet, the problem was that we were entirely managing the platforms, machines, and services ourselves. Things were fast becoming costly as the site grew, especially in terms of developer productivity and infrastructure. We had to admit that managing on-premise was slowing us down, ” said David De Carvalho.

To cover the range of features required on PagesJaunes, the on-premise deployment included more than 40 clusters. Each contained three physical machines to be able to manage the database. In total, several tens of millions of documents were being supported, all with high performance demands on read requests — one of the reasons that led to MongoDB being chosen in the first instance.

Fast forward to 2017 and the market was witnessing the arrival of the cloud. This new movement was opening the door to new infrastructure services, which De Carvalho and team knew would save time and costs across database maintenance. It was at this time that Solocal was also experiencing a rising demand for storage as the directory inputs continued to soar. An updated IT architecture was needed to meet the demand. Solocal was gearing up for the cloud.

“In 2017, we just took a leap. We moved to the cloud and started to migrate our technical stack,” added De Carvalho. “For our databases, this migration took place in lift and shift fashion. We moved our clusters from physical servers to virtual machines in the cloud — an Infrastructure-as-a-Service (IaaS) approach.”

For PagesJaunes and Solocal, this transfer to IaaS was an opportunity to evaluate other database technologies, such as Azure's Cosmos DB. Yet as De Carvalho explains “the load tests were far from conclusive and the changes and approach required were just too complex. We gladly kept MongoDB.”

Solocal now had more direct control over its operating systems using MongoDB with Google Cloud, yet the majority of the management and provisioning of the databases still remained in-house. “We kept self-managing those 40 clusters but we all knew this was a short-term play — we’d have to optimize further soon enough,” added De Carvalho. 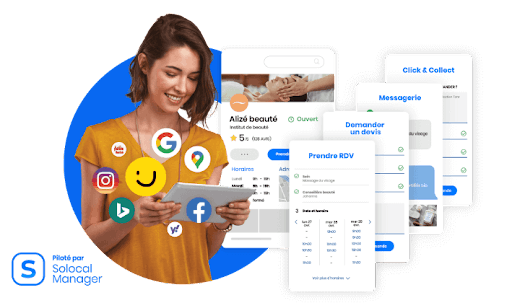 Once on Google Cloud, it would be only two years until that short-term play came to an end. Solocal and De Carvalho needed to optimize their database infrastructure once and for all. ​​A move to a fully managed database service was in order.

In 2019 and following further market analysis and testing, Solocal took the decision to migrate all of its databases to a platform-as-a-service (PaaS) model using MongoDB Atlas, the fully managed global database service on Google Cloud.

Optimizing for the future and driving a strong customer experience

De Carvalho explains that automation and the managed services in MongoDB Atlas has helped to drive down cost of ownership while increasing developer productivity. “A number of items can be automated and that's the choice we made right away. For example, we no longer need to resort to operational staff for backups and restore. MongoDB handles that for us. We also take advantage of the auto-scaling option in Atlas which allows our platform and clusters to move up or down on its own, according to certain rules. If one of them reaches the threshold of 80 percent of activity, MongoDB Atlas will automatically trigger upscaling, where several virtual machines are activated in order to meet demand. It all means that we can reduce our number of clusters and give our developers time back to focus on more productive tasks and making the site better."

The same goes for version updates. While a team of developers previously required a whole week to switch to a new release, the same operation can today be carried out by a single operator in just an hour. “Our DevOps team can now focus on developing new features rather than spending too much time managing infrastructure. We can now make interventions without interruption of service for the users of the Internet sites, whether in database migration or in standard run. We took advantage of this project to optimize our infrastructure, regroup databases in a cluster, homogenize our versions… our teams are much more autonomous ”.

“Our DevOps team can now focus on developing new features rather than spending too much time managing infrastructure.”

For De Carvalho and the Solocal team, the arrival of MongoDB Atlas is a great asset for the business. Solocal now finds itself at the forefront of the digital marketing market in France and uses MongoDB Atlas to deliver a seamless customer experience to its client and those two billion visitors across its PagesJaunes sites - all the while reducing costs and driving developer productivity.

“The added benefit of MongoDB Atlas is that it can operate on any cloud platform, facilitating data portability. It means that we can ensure all of our data remains in Europe but it also makes it possible to access a multi-cloud strategy if needed.”

“The added benefit of MongoDB Atlas is that it can operate on any cloud platform, facilitating data portability. It means that we can ensure all of our data remains in Europe but it also makes it possible to access a multi-cloud strategy if needed.”