When learning a new technology, sometimes the hardest things are the simple steps that take place to get started. These are the steps that “everybody knows” but are often not discussed.

This article covers a fundamental step in using MongoDB: Creating a database.

You can create your MongoDB database, with either the mongo shell, or using Compass. Both methods are available for MongoDB Atlas clusters, and for self-managed clusters.

Like most complex software systems, MongoDB can be controlled with what is called a command-line interface, often referred to as a CLI.

By entering commands into the CLI, you tell MongoDB how to operate, get information about how the MongoDB cluster is running, and perform fundamental actions like the one we will cover today: creating a database.

MongoDB also has a graphic user interface, a GUI called Compass, that can be used to perform many of the same tasks as the commands in the CLI. We’ll cover creating a database using Compass in a later section.

So, if you want to create a database using a command-line interface, the first task is to get access to the MongoDB cluster you are using via the MongoDB shell. A shell is a program that allows you to enter commands into a software system.

Using the CLI with MongoDB Atlas

If you are using MongoDB Atlas, the steps to getting a shell are as follows:

Find out more at Connect to Atlas via Mongo Shell

Using the CLI with a Self-Managed MongoDB Cluster

If you are running a self-managed cluster of MongoDB:

Find out more at Using the MongoDB Shell in Community Edition

Creating a MongoDB Database with the CLI (the MongoDB shell)

Note that admin and local are databases that are part of every MongoDB cluster.

From here on out there are only two tricky things to remember.

The first is that there isn’t a “create” command in the MongoDB shell.

To create a database you use the use command. If the database doesn’t exist, then the MongoDB cluster will create it.

In other words, a database is created when you try to use it with the “use” command.

But let’s say you entered the following command to create a new database:

That’s all you have to do. The database is created. But that leads us to the second tricky thing. Even though the database exists, if you enter the show dbs command it will look like this:

The second tricky thing is that the database isn’t fully created until you put something into it.

To add a document to your database, use the db.<collection>.insert command.

A couple of notes. The “user” in the command refers to the collection that the document was being inserted in. Collections in MongoDB are like tables in a SQL database, but they are groups of documents rather than groups of records.

Collections are created just like databases, by referring to them in a command.

WriteResult({ "nInserted" : 1 }) indicates that the document was added to the collection.

Now if you run the show dbs command you will see your database.

How did the insert command know to put the data into myshinynewdb?

It turns out that when you entered the use command, then myshinynewdb became the current database on which commands operate.

To find out which database is the current one, enter the db command:

The db command displays the name of the current database. To switch to a different database, type the use command and specify that database.

Some users would rather work with a GUI to create and update their data and collections. The MongoDB GUI, Compass, offers additional functionality like data visualization and performance profiling as well as offering CRUD (create, read, update, delete) access to data, databases, and collections.

Find out more at MongoDB Compass: The Easiest Way to Manage and Explore Your Data

If you are using MongoDB Atlas, the steps to getting to Compass are as follows"

If you are using self-managed MongoDB:

Creating a MongoDB Database with Compass

The Databases tab in MongoDB Compass has a Create Database button. 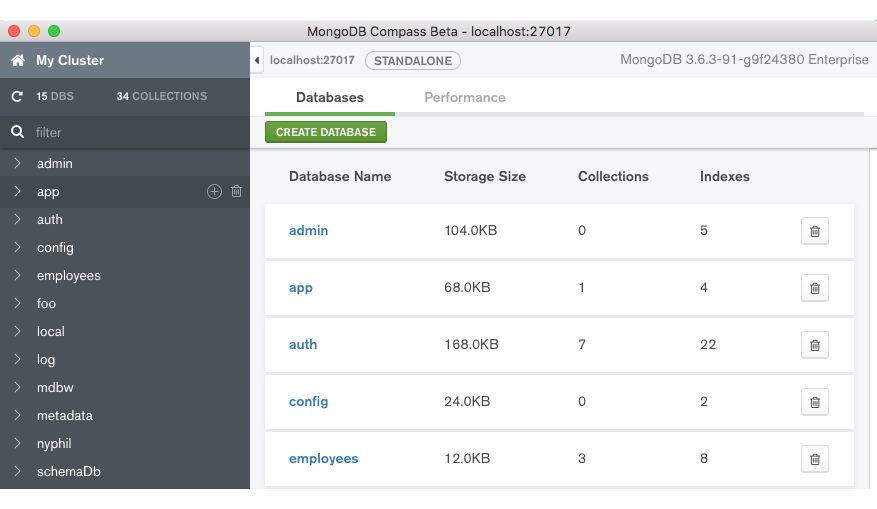 In MongoDB Compass, you create a database and add its first collection at the same time:

The next step is to insert one or more documents into your database.

Click the Add Data button to insert one or more documents into your collection.

Click Insert to add the documents to your collection.

Using these simple steps shows how to create a database, a collection, and insert documents.

Now you have a database, collection, and documents to work with and can learn even more. Join the MongoDB community for forums, webinars, and free courses from MongoDB University.

Create a MongoDB database in the cloud for free with MongoDB Atlas. No credit card required.