Murphy's law dictates that as soon as your mobile app goes live, you'll receive a request to add a new feature. Then another. Then another.

This is fine if these features don't require any changes to your data schema. But, that isn't always the case.

This tutorial will step you through updating an existing mobile app to add some new features that require changes to the schema. In particular, we'll look at the Realm migration code that ensures that no existing data is lost when the new app versions are rolled out to your production users.

We'll use the Scrumdinger app that I modified in a previous post to show how Apple's sample Swift app could be ported to Realm. The starting point for the app can be found in this branch of our Scrumdinger repo and the final version is in this branch.

Note that the app we're using for this post doesn't use MongoDB Realm Sync. If it did, then the schema migration process would be very different—that's covered in Migrating Your iOS App's Synced Realm Schema in Production.

As a reminder, the starting point for this tutorial is the "realm" branch of the Scrumdinger repo.

There are two Realm model classes that we'll extend to add new features to Scrumdinger. The first, DailyScrum, represents one scrum:

The second, History, represents the minutes of a meeting from one of the user's scrums:

We can use Realm Studio to examine the contents of our Realm database after the DailyScrum and History objects have been created:

Accessing Realm Data on iOS Using Realm Studio explains how to locate and open the Realm files from your iOS simulator.

The first new feature we've been asked to add is a flag to indicate whether each scrum is public or private: 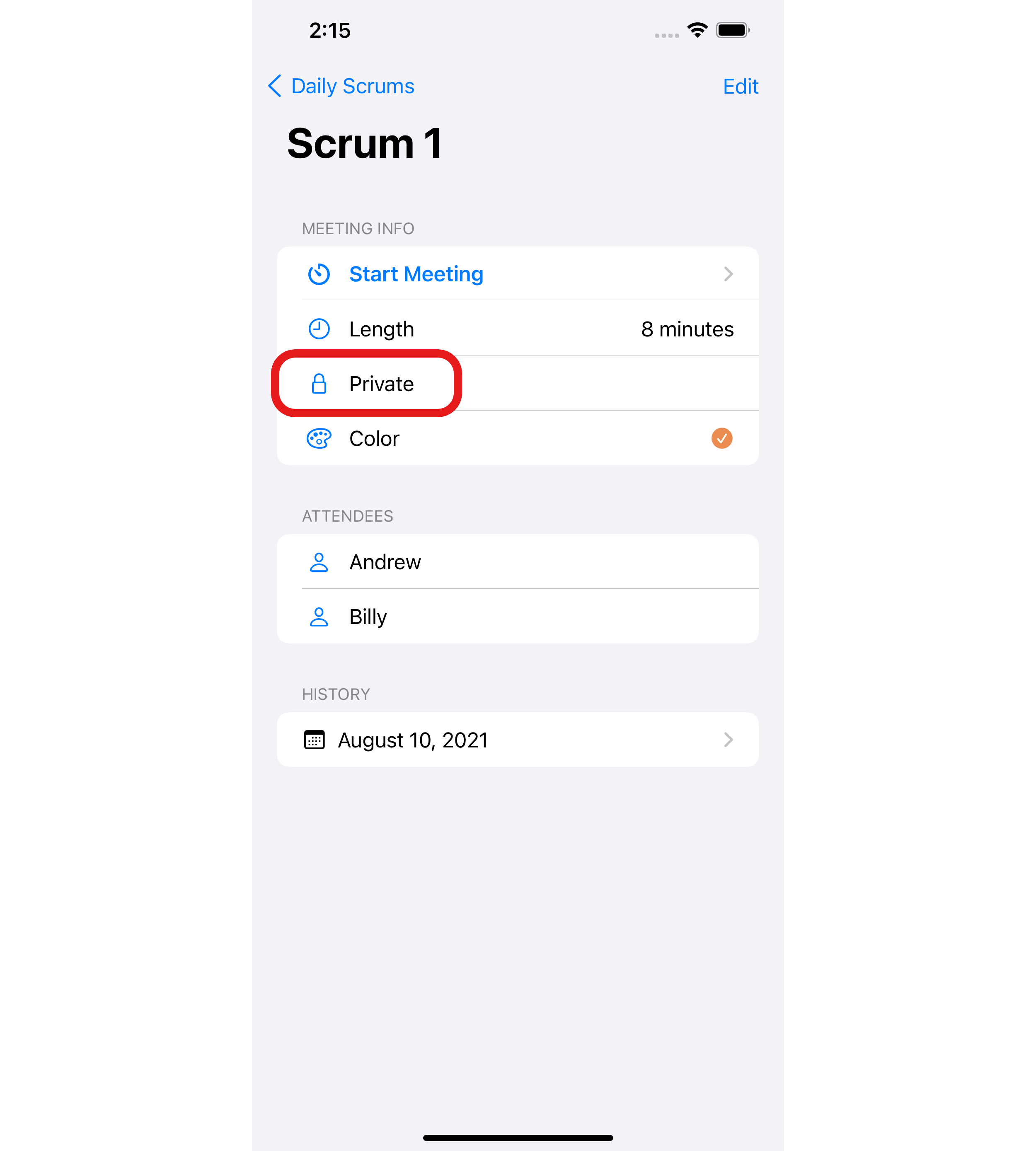 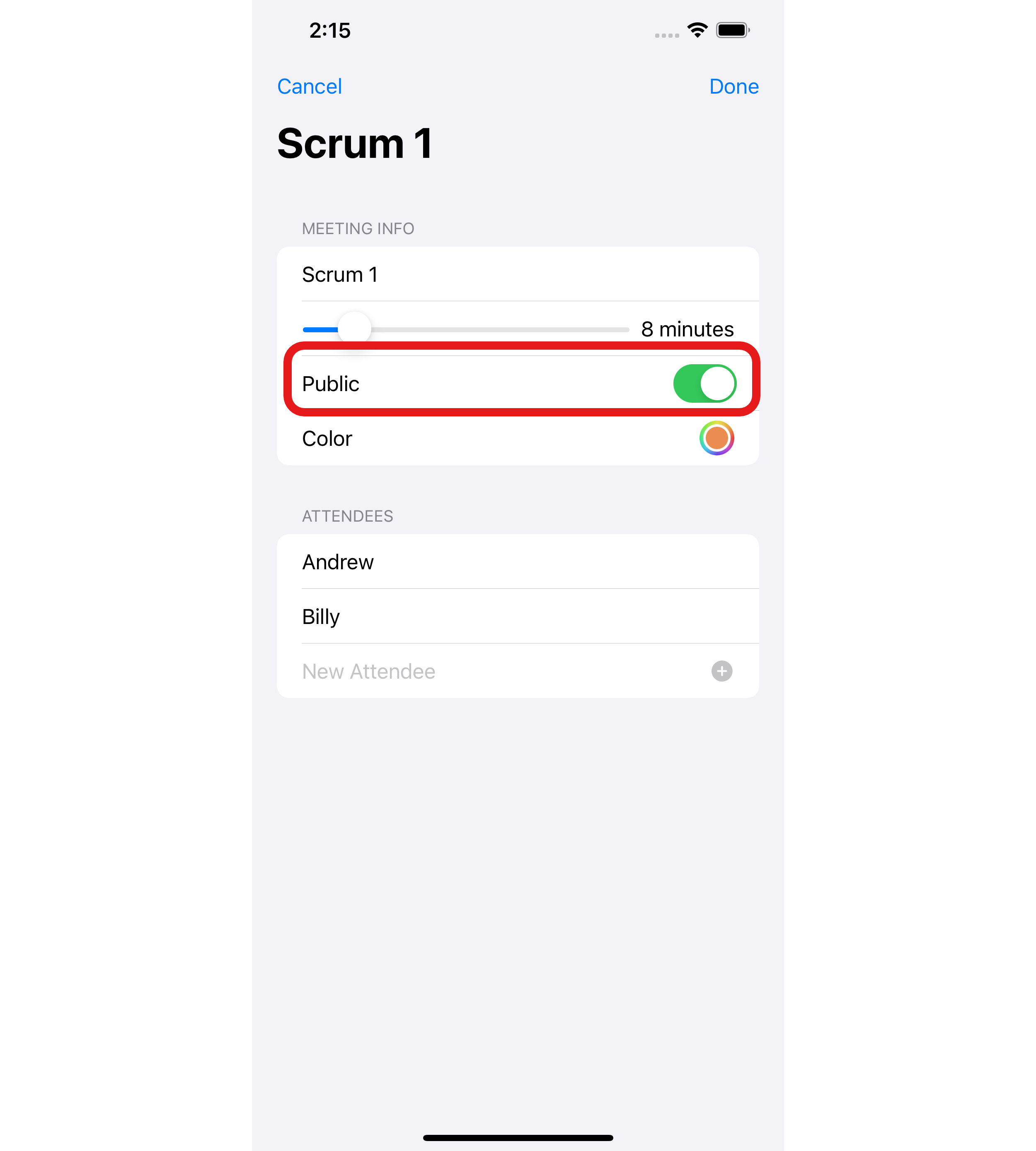 This feature requires the addition of a new Bool named isPublic to DailyScrum:

Remember that our original version of Scrumdinger is already in production, and the embedded Realm database is storing instances of DailyScrum. We don't want to lose that data, and so we must migrate those objects to the new schema when the app is upgraded.

Fortunately, Realm has built-in functionality to automatically handle the addition and deletion of fields. When adding a field, Realm will use a default value (e.g., 0 for an Int, and false for a Bool).

If we simply upgrade the installed app with the one using the new schema, then we'll get a fatal error. That's because we need to tell Realm that we've updated the schema. We do that by setting the schema version to 1 (the version defaulted to 0 for the original schema):

After upgrading the app, we can use Realm Studio to confirm that our DailyScrum object has been updated to initialize isPublic to false:

#Schema Change #2—Store The Number of Attendees at Each Meeting

The second feature request is to show the number of attendees in the history from each meeting:

We could calculate the count every time that it's needed, but we've decided to calculate it just once and then store it in our History object in a new field named numberOfAttendees:

If we leave it to Realm to initialize numberOfAttendees, then it will set it to 0—which is not what we want. Instead, we provide a migrationBlock which initializes new fields based on the old schema version:

Note that all other fields are migrated automatically.

We can't know what "old version" of the schema will be already installed on a user's device when it's upgraded to the latest version (some users may skip some versions,) and so the migrationBlock must handle all previous versions. Best practice is to process the incremental schema changes sequentially:

Realm Studio shows that our code has correctly initialized numberOfAttendees:

It's almost inevitable that any successful mobile app will need some schema changes after it's gone into production. Realm makes adapting to those changes simple, ensuring that users don't lose any of their existing data when upgrading to new versions of the app.

For changes such as adding or removing fields, all you need to do as a developer is to increment the version with each new deployed schema. For more complex changes, you provide code that computes the values for fields in the new schema using data from the old schema.

This tutorial stepped you through adding two new features that both required schema changes. You can view the final app in the new-schema branch of the Scrumdinger repo.

This post focussed on schema migration for an iOS app. You can find some more complex examples in the repo.

If you're working with an app for a different platform, then you can find instructions in the docs:

If you've any questions about schema migration, or anything else related to Realm, then please post them to our community forum.