Adopting continuous integration and continuous delivery (CI/CD) for managing the lifecycle of a database has the following benefits:

#Why CI/CD for MongoDB Atlas?

MongoDB Atlas is a multi-cloud application data platform, providing an integrated suite of cloud database and data services to accelerate and simplify how you build with data. MongoDB Atlas also provides a comprehensive API, making CI/CD for the actual data platform itself possible.

In this blog, we’ll demonstrate how to set up CI/CD for MongoDB Atlas, in a typical production setting. The intended audience is developers, solutions architects, and database administrators with knowledge of MongoDB Atlas, AWS, and Terraform.

Enough talk—let’s get to the action. As developers, we love working examples as a way to understand how things work. So, here’s how we did it.

You will also need to have Docker installed as we are using a docker container to run all provisioning. For more information on how to install Docker, see Get Started with Docker. We are using Docker as it will make it easier for you to get started, as all the tooling is packaged in the container—such as AWS cli, mongosh, and Terraform.

#What You Will Build 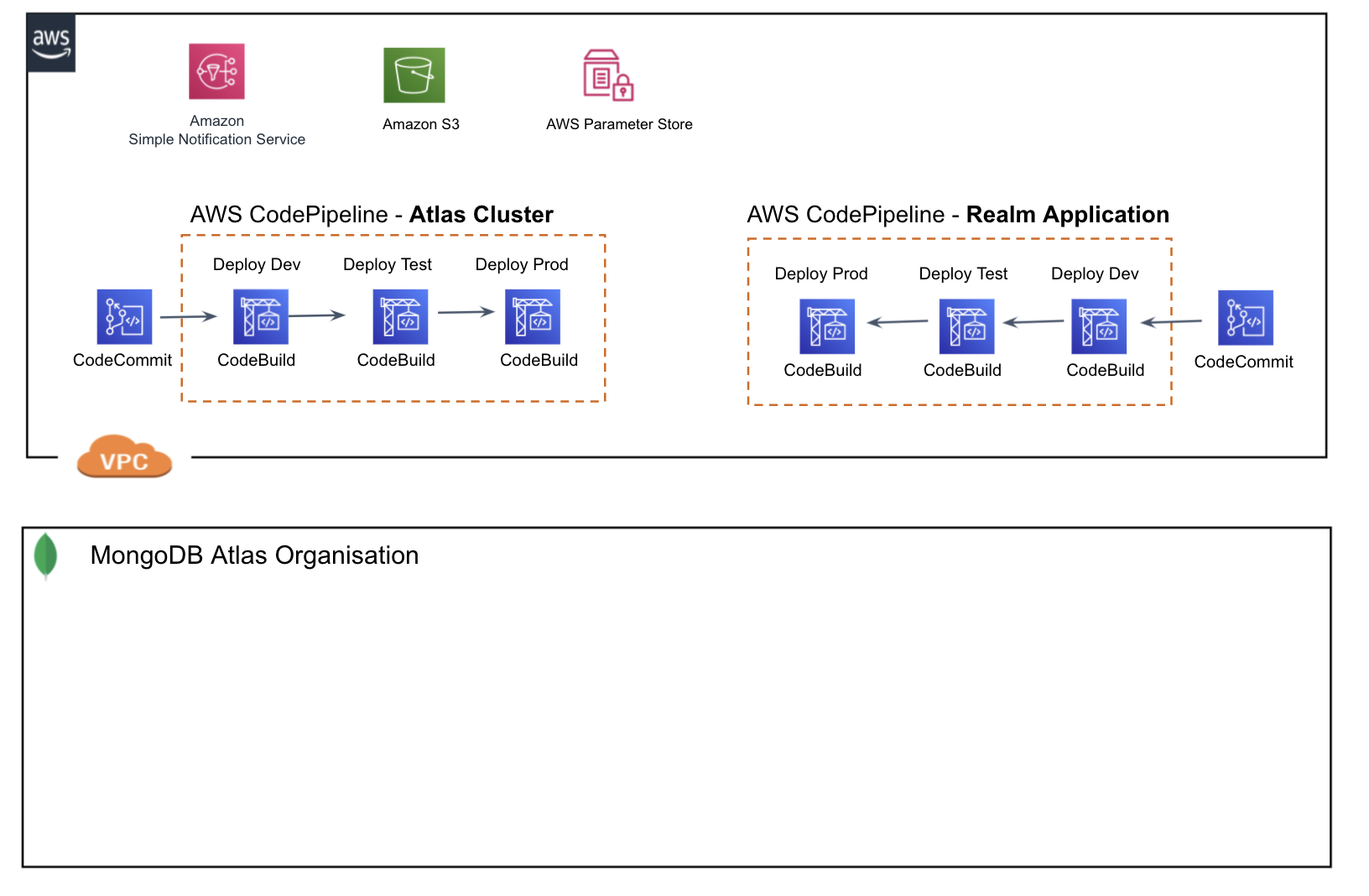 Next, we’ll fire off the script to bootstrap our AWS environment and Atlas account as shown in Diagram 1 using Terraform.

You will need to use programmatic access keys for your AWS account and the Atlas organisation-level API key that you have created as described in the prerequisites.This is also the only time you’ll need to handle the keys manually.

Once all the parameters are defined, you are ready to run the script that will create your CI/CD pipeline.

When deploy.sh is invoked, provisioning of AWS resources starts, using Terraform templates. The resources created are shown in Diagram 1.

Until you’ve committed anything, the pipeline will have a failed Source stage. This is because it tries to check out a branch that does not exist in the code repository. After you’ve committed the Terraform code you want to execute, you’ll see that the Source stage will restart and proceed as expected. You can find the pipeline in the AWS console at this url: https://eu-west-1.console.aws.amazon.com/codesuite/codepipeline/pipelines?region=eu-west-1 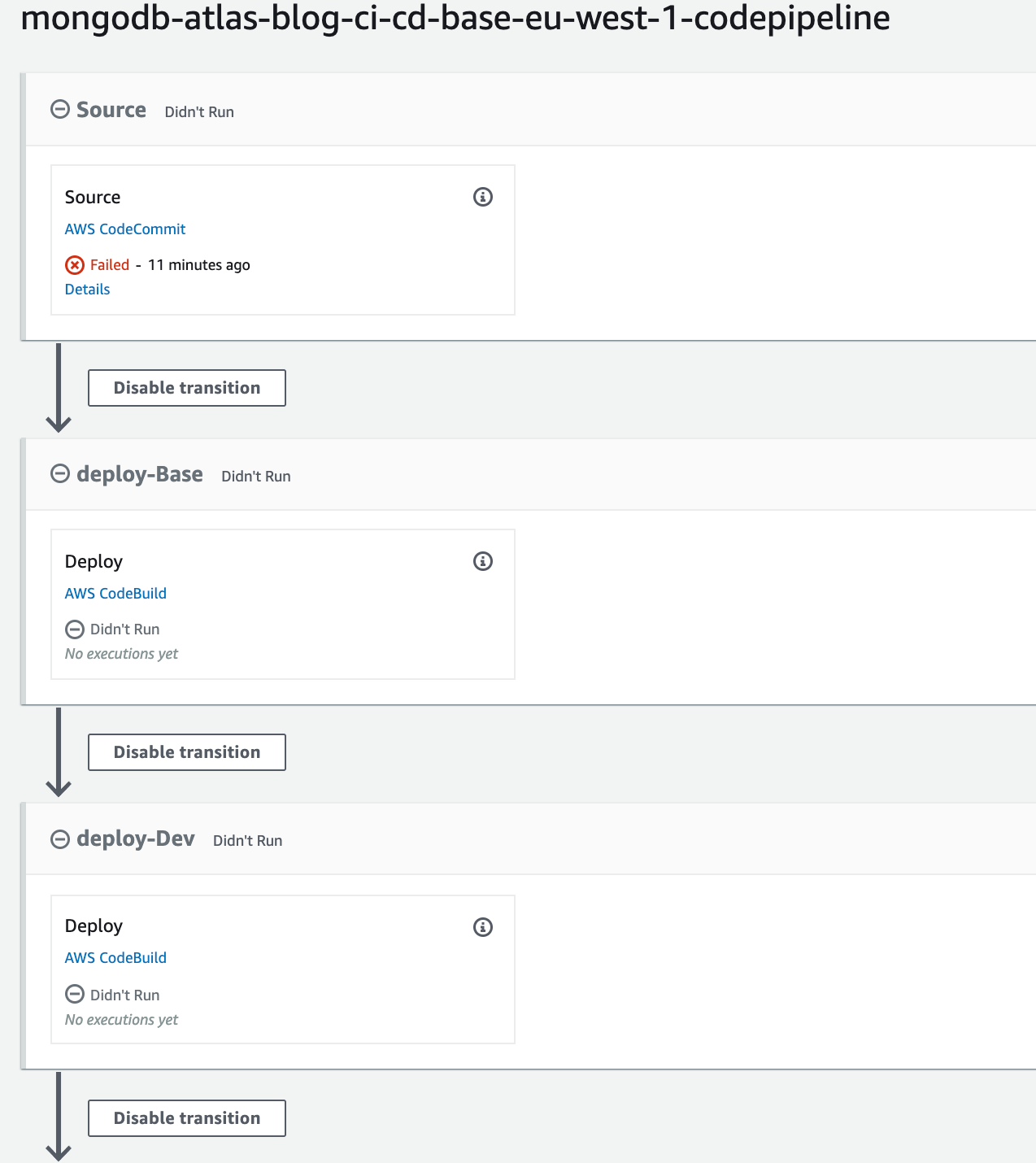 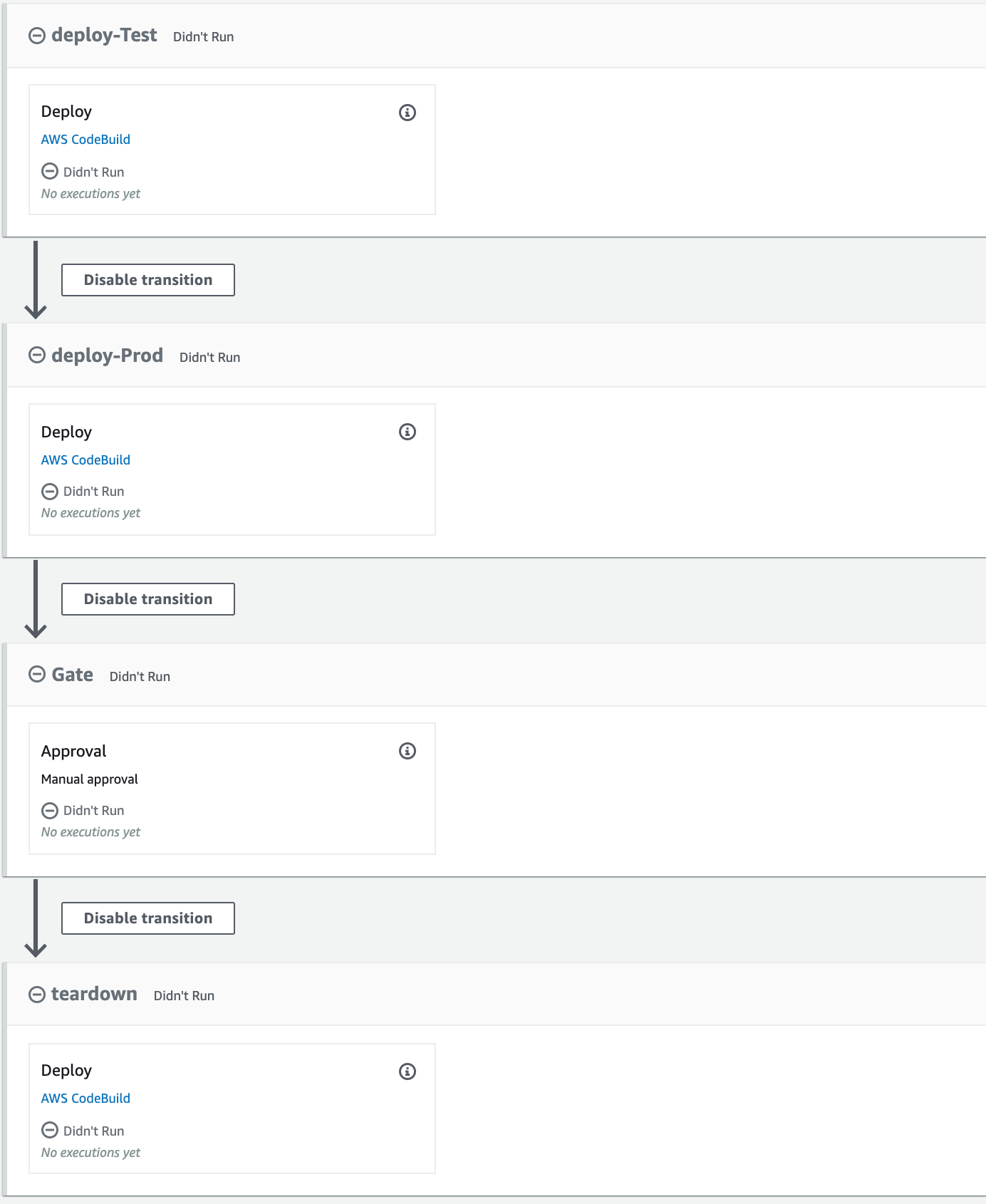 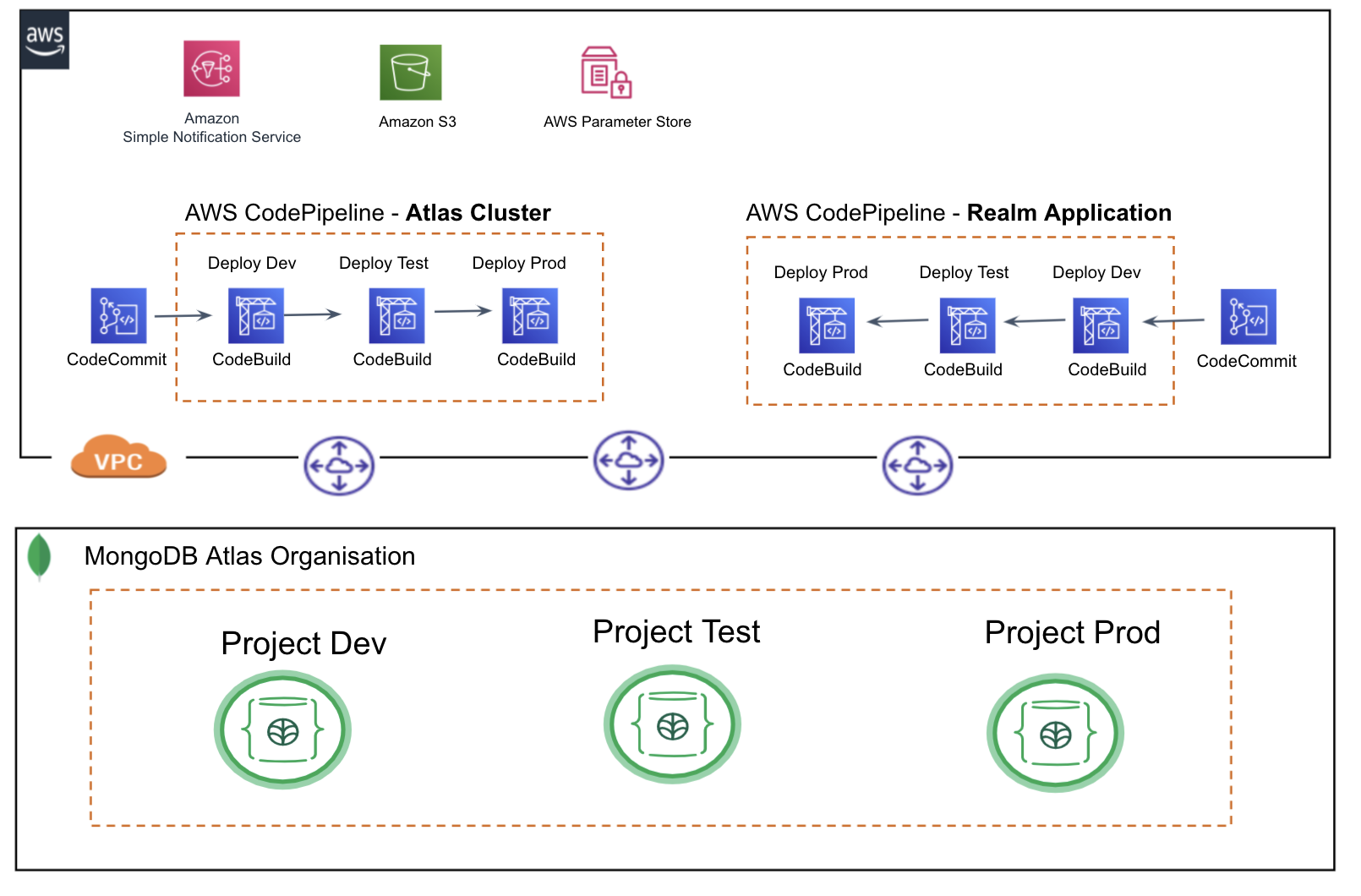 Next is to deploy the Atlas cluster (projects, users, API keys, etc). This is done by pushing a configuration into the new AWS CodeCommit repo.

If you’re like me and want to see how provisioning of the Atlas cluster works before setting up IAM properly, you can push the original github repo to AWS CodeCommit directly inside the docker container (inside the Terraform folder) using a bit of a hack. By pushing to the CodeCommit repo, AWS CodePipeline will be triggered and provisioning of the Atlas cluster will start.

To set up access to the CodeCommit repo properly, for use that survives stopping the docker container, you’ll need a proper git CodeCommit user. Follow the steps in the AWS documentation to create and configure your CodeCommit git user in AWS IAM. Then clone the AWS CodeCommit repository that was created in the bootstrapping, outside your docker container, perhaps in another tab in your shell, using your IAM credentials. If you did not use the “hack” to initialize it, it’ll be empty, so copy the Terraform folder that is provided in this solution, to the root of the cloned CodeCommit repository, then commit and push to kick off the pipeline. Now you can use this repo to control your setup! You should now see in the AWS CodePipeline console that the pipeline has been triggered. The pipeline will create Atlas clusters in each of the Atlas Projects and configure AWS PrivateLink.

Let’s dive into the stages defined in this Terraform pipeline file.

Deploy-Base This is basically re-applying what we did in the bootstrapping. This stage ensures we can improve on the AWS pipeline infrastructure itself over time.

Approving means we think it all looks good. Perhaps counter intuitively but great for demos, it proceeds to teardown. This might be one of the first behaviours you’ll change. :)

This decommissions the dev, test, and prod resources we created above. To decommission the base resources, including the pipeline itself, we recommend you run that externally—for example, from the Docker container on your laptop. We’ll cover that later.

As you advance towards the Gate stage, you’ll see the Atlas clusters build out. Below is an example where the Test stage is creating a cluster. Approving the Gate will undeploy the resources created in the dev, test, and prod stages, but keep projects and users.

Then you can edit, for example, the MongoDB version by changing 4.4 to 5.0 in terraform/environment/dev/variables.tf.

#Step 4: Clean Up Base Infrastructure

Now, that was interesting. Time for cleaning up! To decommission the full environment, you should first approve the Gate stage to execute the teardown job. When that’s been done, only the base infrastructure remains. Start the container again as in Step 1 if it’s not running, and then execute deploy_baseline.sh, replacing the word apply with destroy:

When implementing infrastructure as code for a MongoDB Atlas Cluster, you have to consider not just the cluster creation but also a strategy for how to separate dev, qa, and prod environments and how to store secrets. This to minimize blast radius.

We also noticed how useful resource tagging is to make Terraform scripts portable. By setting tags on AWS resources, the script does not need to know the names of the resources but can look them up by tag instead.

By using CI/CD automation for Atlas clusters, you can speed up deployments and increase the agility of your software teams.

MongoDB Atlas offers a powerful API that, in combination with AWS CI/CD services and Terraform, can support continuous delivery of MongoDB Atlas clusters, and version-control the database lifecycle. You can apply the same pattern with other CI/CD tools that aren’t specific to AWS.

In this blog, we’ve offered an exhaustive, reproducible, and reusable deployment process for MongoDB Atlas, including traceability. A devops team can use our demonstration as inspiration for how to quickly deploy MongoDB Atlas, automatically embedding organisation best practices.