First off - before we get into anything - what is it that we’re all trying to achieve with our data? Sure, there are necessary evils such as reading and writing data from databases, putting data on message buses, and working through open source integrations, but at the end of the day what we really want to do is take information, compute it, and get it in front of the right people to help them make better decisions.

Business demands often seem pretty simple - “I just want to save my trades” or “Can we make a product catalog that handles ¥, £, and $ seamlessly?” - but the way that the data is expressed in code or in the application is different from the way it’s framed in a business use case. When you get to how the use case is implemented in the database, the differences are even more pronounced.

And why is that? One reason is that innovation in business and in the code/application layer has far outpaced innovation in database technologies. RDBMS came onto the scene in 1974. Since then, business goals have changed, the pace of business has increased (time to market actually matters a lot now), and we’re using technologies we could not possibly have imagined would exist 40 years ago. Back then we had fairly simple languages that were well-mated to the ‘rectangular’ and ‘flat’ RDBMS world. Today, we have extremely powerful languages of all types with never-ending streams of updates coming from the open source ecosystems we’ve built. The only thing that’s constant is change.

That’s where NoSQL comes in, in particular MongoDB. What makes MongoDB special is that it stores data in rich structures (maps of maps of lists that eventually drill down to integers, float point numbers, dates, and strings). MongoDB was designed to not only fluidly store these objects, but also to present them in APIs and with a query language that knows how to understand all the types of data you’re storing. This is in stark contrast to the legacy technologies designed and built in the programming environments of the 1970s.

In MongoDB, your data is the schema and there is symmetry between the way data goes into the database and the way it comes out. With traditional technologies, the differences between what it means to put data in and take data out increase as applications get more complex. The examples we cover in this series will demonstrate these concepts.

And finally, no MongoDB primer would be complete without the following diagram: 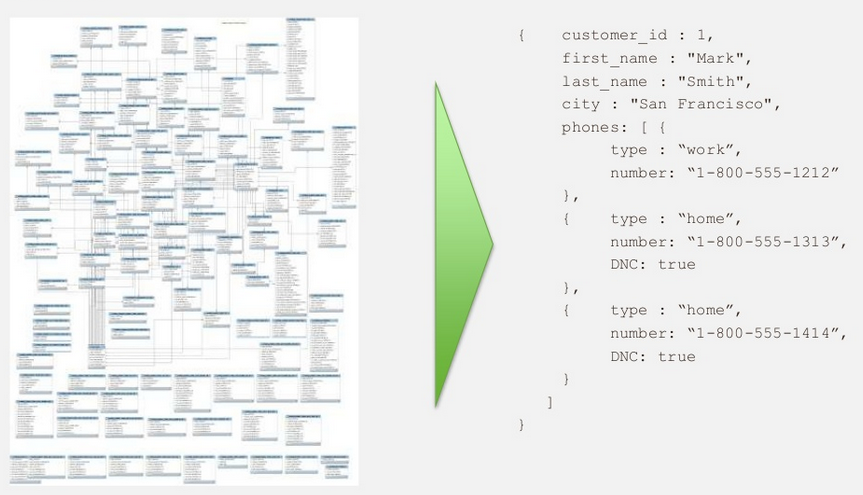 The image on the left illustrates storing customer data in ‘rectangular’ tables and the schema diagram needed to make sense of it all. The image on the right illustrates how data is stored in MongoDB. Suffice it to say that the diagram on the left is more complicated than the one on the right. Now, to be fair, the diagram on the left does contain more entities than just a customer and his phones, and it in all likelihood, it didn’t start out looking like that. It was probably relatively simple in the beginning. Then someone needed something that wasn’t a scalar, and someone else needed a few other things, and before they knew what happened, what was once manageable exploded into what you currently see.

Now let’s get into the actual differences between SQL and MongoDB and how we transition our thinking using code.

We’re going to start with a map, which will let us move data in and out of our data access layer. Maps are rich shapes so we can stick a lot of things into them, and perhaps more importantly, there is no compile-time dependency.

We’ll start with this simple, flat shape in the data access layer:

We’ll save it in this way:

And assume we can fetch it by primary key in this way:

In our initial case, we just have two very simple things, “save” and “fetch”. Rich queries will come later on. This is what this might look like in the code for both SQL and MongoDB: 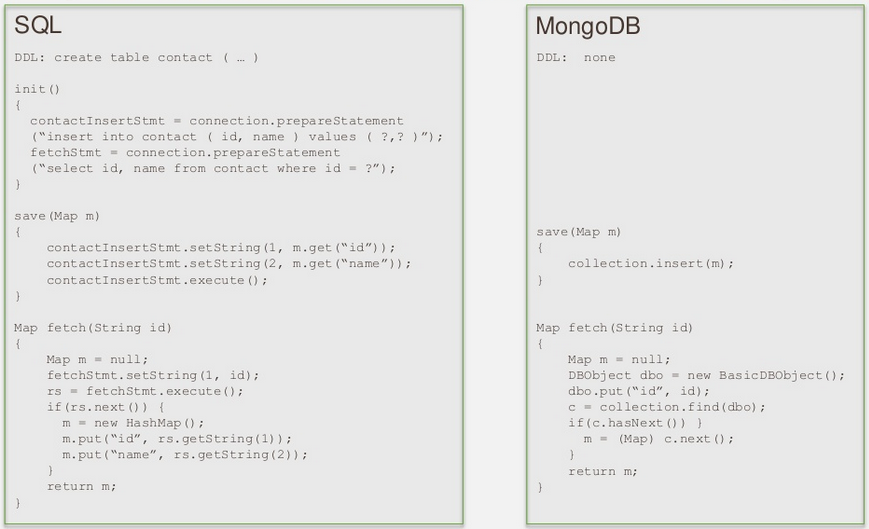 In MongoDB, “data is the schema” and we are not required to create a table. If you look closer at the fetch functions, you’ll notice that they are largely the same. An important takeaway from this is that in MongoDB, your basic way of addressing the database is actually very similar to how you would do it in an RDBMS. You construct the query, you pass it in, you get back the cursor, and you iterate over the cursor. The fidelity of the data moving out will change as we progress through these examples, but for now lets assume that we have parity.

Let’s add two fields: a title and a date.

Notice that we’re putting an actual Date object into the “hireDate” slot, not a string representation like “2011-11-01”. In a well-designed data access layer, we always want to use the highest fidelity objects we can. Dates in particular need to be treated this way to avoid YYYYMMDD vs. YYYYDDMM confusion. 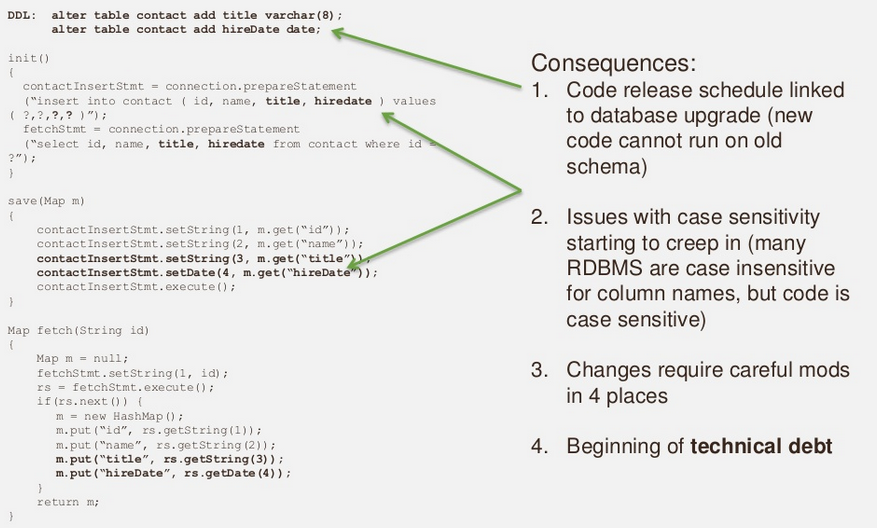 The first thing to notice is the alter table problem. Before we can touch any code that’s going to interact with the new database, we have to first change the table definition; otherwise, the select statement that’s going after the new fields is simply not going to work. This is nothing new. It’s something that everyone has become numb to over the past 40 years using RDBMS. There are a few other things that developers might also need to consider like case sensitivity, etc.

Now let’s look at what this looks like in MongoDB: 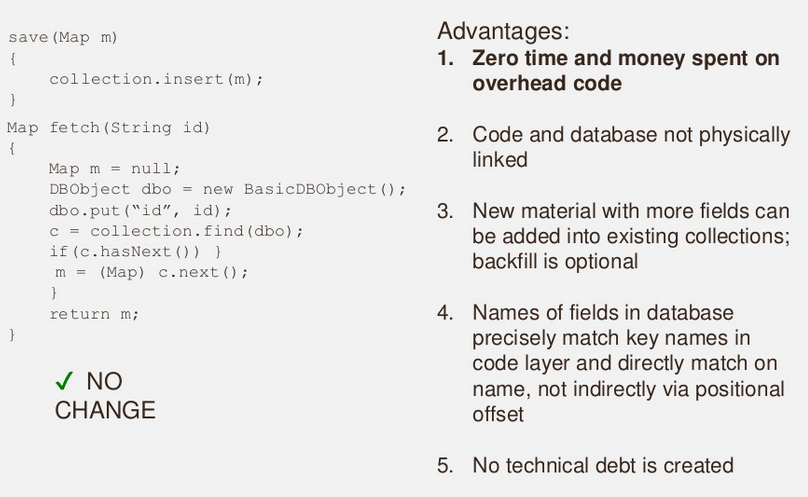 What did we have to change in MongoDB? Nothing.

For more information on migration, explore these resources:
Migration Guide

*About the Author - Buzz Moschetti*

Zero to 1 Billion Records: A True Story of Learning and Scaling MongoDB at GameChanger