MongoDB’s flexible schema and rich document structure allow developers to quickly build applications with rich data structures. However, this flexibility can also make it difficult to understand the structure of the data in an existing database.

Until now, if you wanted to understand the structure of your data, you would have to use the MongoDB shell to issue queries and view data at the command line. There has to be a better way -- enter MongoDB Compass.

What is MongoDB Compass?

MongoDB 3.2 introduces MongoDB Compass -- a graphical tool that allows you to easily analyse and understand your database schema, as well as allowing you to visually construct queries, all without having to know MongoDB’s query syntax: 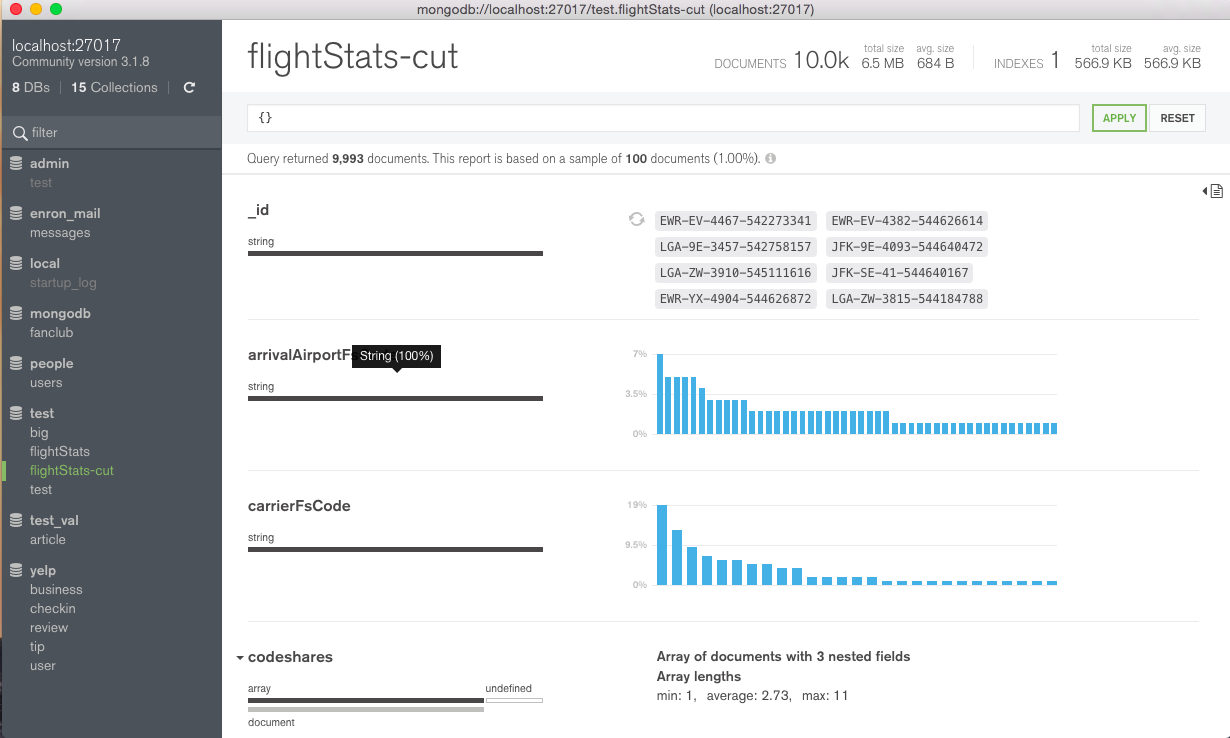 Compass displays the data types of fields in a collection’s schema. The example below is taken from a mock dataset that I use when test driving Compass. It reports that there are documents in the collection that contain a field last_login with the type date:

Compass also displays a percentage breakdown for fields with varying data types across documents. In this example, 81% of documents store phone_no as a string, and the remaining 19% store it as a number:

For sparse fields, where some documents omit a value, Compass displays the percentage of missing values as “undefined.” Here, the age field is missing in 40% of the sampled documents.

This is exceptionally useful to understand whether your application is storing data the way that you expect it to. Imagine the case where you have a field showing a mix of strings and numbers - perhaps there is an application bug somewhere that has crept in and is storing data with a different type than it should be?

Compass is able to show histograms to represent the data frequency and distribution within a collection. For example, here is a data set containing the age of users. We can see the minimum age is 16, the maximum age is 56 and the most popular age is late 30’s (the exact value is shown by hovering over the bar itself).

Here’s another example using a field that stores names. Compass will display a random selection of string values for the field:

Do you want an easier way to type out a MongoDB query? Charts in Compass are fully interactive. Clicking on a chart value or bar will automatically build a MongoDB query that matches the selected range in the interface.

In the example below, clicking on the “JFK” bar builds a query matching all documents whose departureAirportFsCode field matches “JFK”: 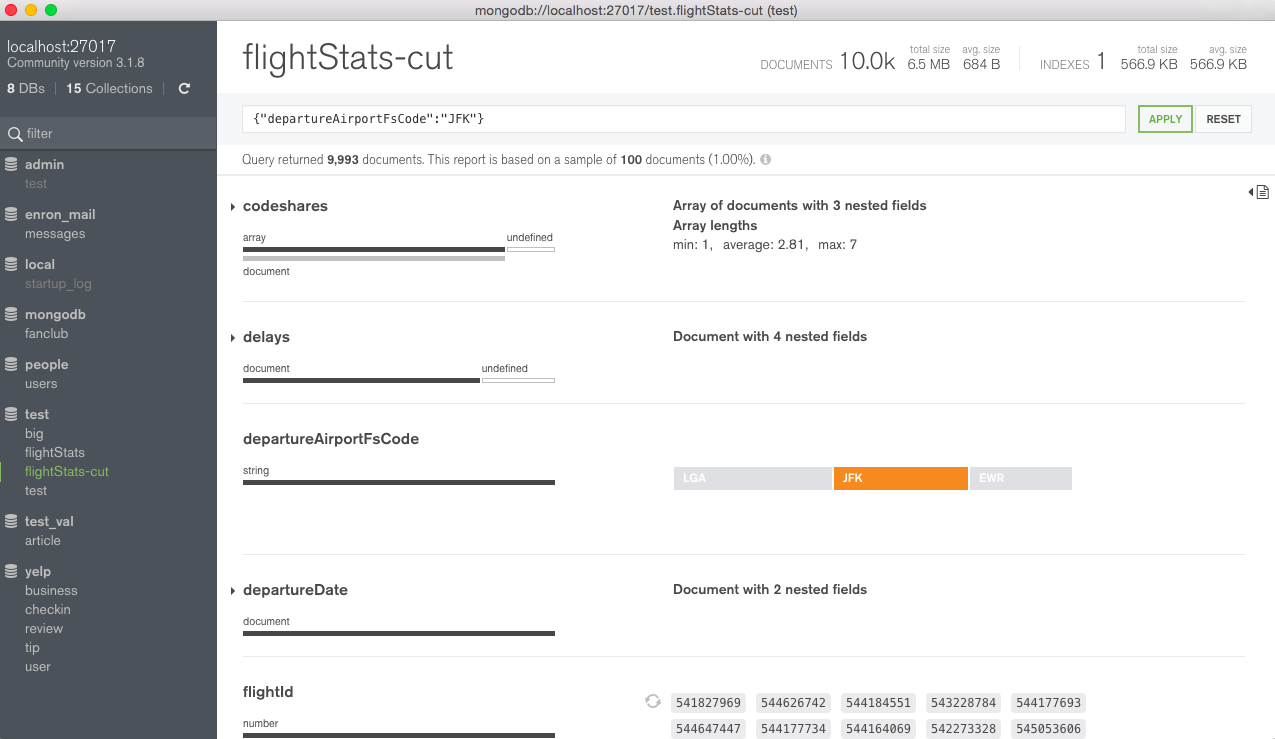 Clicking on other field values adds the field and range to the selection, creating a more complex query. Continuing with our example, we can select a particular flightId in addition to departures from JFK Airport. 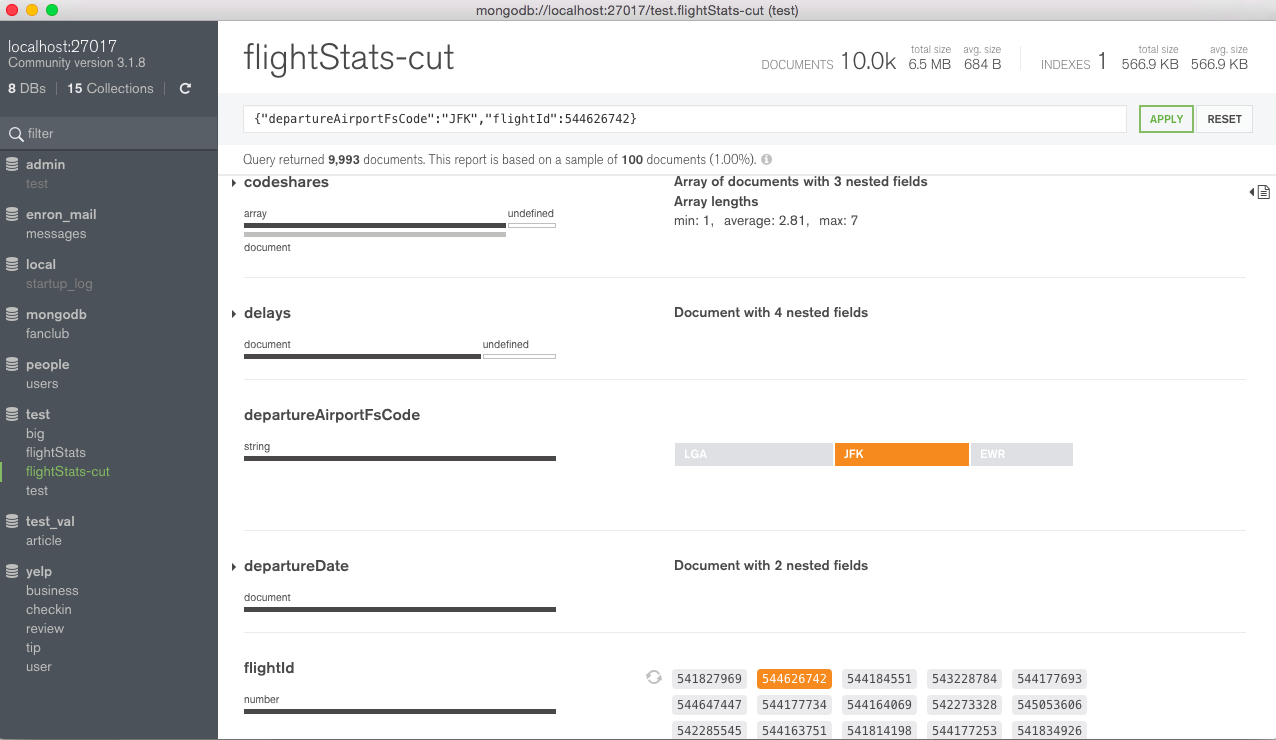 Once you hit the Apply button, Compass will execute the query and bring back the results! It’s as easy as it sounds. You can be building queries with a few clicks of a button in no time at all.

One final thing to mention - we didn’t forget about the JSON. Documents can be examined in the document viewing pane. This can be expanded by clicking on the Document Viewer icon on the right-hand side of the page: 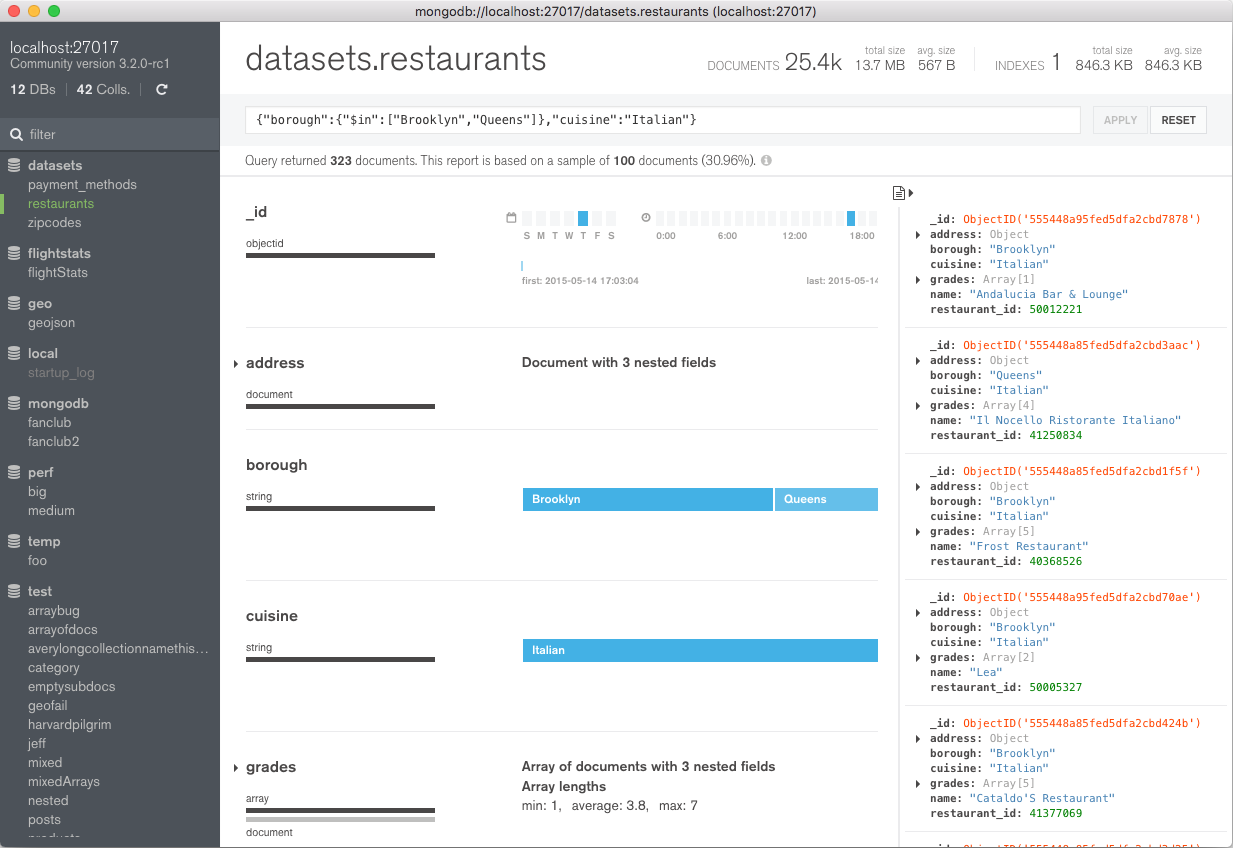 I know you must be wondering - where can I get this thing?!

Well, MongoDB Compass is available in the download center on mongodb.com. It comes included for production use with our subscriptions, both MongoDB Professional and MongoDB Enterprise Advanced. MongoDB Compass can also be used for free in a development environment.

This is only version 1.0 of Compass - there is lots of great functionality to come. I’m super excited to be part of the Compass team and I can’t wait for the next set of releases.

About the author - Sam Weaver

Sam Weaver is the Product Manager for Developer Experience at MongoDB based in New York. Prior to MongoDB, he worked at Red Hat doing technical presales on Linux, Virtualisation, and Middleware. Originally from Cheltenham, England, he received his Bachelors in Computer Science from Cardiff University. Sam has also cycled from London to Paris, competed in several extreme sports tournaments such as ToughMudder, and swam with great white sharks.

Analyzing Data in Microsoft Excel with the MongoDB Connector for BI

There are many great BI tools out there that enable powerful analytics and data visualization, but sometimes the right tool for the job is the one you already have sitting on your laptop. MongoDB 3.2 introduced the MongoDB Connector for BI which presents a SQL API to allow BI tools to read data from your database in real time. Typically, this functionality will be showcased with sophisticated analytics and visualization platforms such as Tableau , but it's equally applicable to Microsoft's ubiquitous Excel. This video demonstrates how to connect Excel running on Microsoft Windows to the BI connector and then fetch data from MongoDB. The instructions in the demo assume that you already have a MongoDB database running together with a configured instance of the MongoDB Connector for BI – the [documentation](https://docs.mongodb.org/manual/products/bi-connector/) explains how to set that up. Note that Excel is not able to handle the . character or capital letters in table or column names. To overcome this, it was necessary to edit the DRDL file produced by the mongodrdl tool to map names to lowercase equivalents and to replace each . (used to flatten embedded documents) with a _ ; this requires v1.1 or later of the BI connector. Additionally, Excel cannot access the BI connector directly and so the demo shows how to download the required ODBC driver . The MongoDB Connector for BI is part of MongoDB Enterprise Advanced ; it can be freely downloaded for evaluation – why not try it out for yourself . More information on the BI connector as well as other MongoDB 3.2 features can be found in MongoDB 3.2: What's New . Learn about live data visualization with Tableau and MongoDB, watch Andrew's presentation. Watch live data visualisation with Tableau & MongoDB About the Author - Andrew Morgan Andrew is a Principal Product Marketing Manager working for MongoDB. He joined at the start of last summer from Oracle where he’d spent 6+ years in product management, focussed on High Availability. He can be contacted at @andrewmorgan or through comments on his blog (clusterdb.com).

Modernize your GraphQL APIs with MongoDB Atlas and AWS AppSync

Modern applications typically need data from a variety of data sources, which are frequently backed by different databases and fronted by a multitude of REST APIs. Consolidating the data into a single coherent API presents a significant challenge for application developers. GraphQL emerged as a leading data query and manipulation language to simplify consolidating various APIs. GraphQL provides a complete and understandable description of the data in your API, giving clients the power to ask for exactly what they need — while making it easier to evolve APIs over time. It complements popular development stacks like MEAN and MERN , aggregating data from multiple origins into a single source that applications can then easily interact with. MongoDB Atlas: A modern developer data platform MongoDB Atlas is a modern developer data platform with a fully managed cloud database at its core. It provides rich features like native time series collections, geospatial data, multi-level indexing, search, isolated workloads, and many more — all built on top of the flexible MongoDB document data model. MongoDB Atlas App Services help developers build apps, integrate services, and connect to their data by reducing operational overhead through features such as hosted Data API and GraphQL API. The Atlas Data API allows developers to easily integrate Atlas data into their cloud apps and services over HTTPS with a flexible, REST-like API layer. The Atlas GraphQL API lets developers access Atlas data from any standard GraphQL client with an API that generates based on your data’s schema. AWS AppSync: Serverless GrapghQL and pub/sub APIs AWS AppSync is an AWS managed service that allows developers to build GraphQL and Pub/Sub APIs. With AWS AppSync, developers can create APIs that access data from one or many sources and enable real-time interactions in their applications. The resulting APIs are serverless, automatically scale to meet the throughput and latency requirements of the most demanding applications, and charge only for requests to the API and by real-time messages delivered. Exposing your MongoDB Data over a scalable GraphQL API with AWS AppSync Together, AWS AppSync and MongoDB Atlas help developers create GraphQL APIs by integrating multiple REST APIs and data sources on AWS. This gives frontend developers a single GraphQL API data source to drive their applications. Compared to REST APIs, developers get flexibility in defining the structure of the data while reducing the payload size by bringing only the attributes that are required. Additionally, developers are able to take advantage of other AWS services such as Amazon Cognito, AWS Amplify, Amazon API Gateway, and AWS Lambda when building modern applications. This allows for a severless end-to-end architecture, which is backed by MongoDB Atlas serverless instances and available in pay-as-you-go mode from the AWS Marketplace . Paths to integration AWS AppSync uses data sources and resolvers to translate GraphQL requests and to retrieve data; for example, users can fetch MongoDB Atlas data using AppSync Direct Lambda Resolvers. Below, we explore two approaches to implementing Lambda Resolvers: using the Atlas Data API or connecting directly via MongoDB drivers . Using the Atlas Data API in a Direct Lambda Resolver With this approach, developers leverage the pre-created Atlas Data API when building a Direct Lambda Resolver. This ready-made API acts as a data source in the resolver, and supports popular authentication mechanisms based on API Keys, JWT, or email-password. This enables seamless integration with Amazon Cognito to manage customer identity and access. The Atlas Data API lets you read and write data in Atlas using standard HTTPS requests and comes with managed networking and connections, replacing your typical app server. Any runtime capable of making HTTPS calls is compatible with the API. Figure 1: &nbsp; Architecture details of Direct Lambda Resolver with Data API Figure 1 shows how AWS AppSync leverages the AWS Lambda Direct Resolver to connect to the MongoDB Atlas Data API. The Atlas Data API then interacts with your Atlas Cluster to retrieve and store the data. MongoDB driver-based Direct Lambda Resolver With this option, the Lambda Resolver connects to MongoDB Atlas directly via drivers , which are available in multiple programming languages and provide idiomatic access to MongoDB. MongoDB drivers support a rich set of functionality and options , including the MongoDB Query Language, write and read concerns, and more. Figure 2: &nbsp; Details the architecture of Direct Lambda Resolvers through native MongoDB drivers Figure 2 shows how the AWS AppSync endpoint leverages Lambda Resolvers to connect to MongoDB Atlas. The Lambda function uses a MongoDB driver to make a direct connection to the Atlas cluster, and to retrieve and store data. The table below summarizes the different resolver implementation approaches. Table 1: &nbsp; Feature comparison of resolver implementations Setup Atlas Cluster Set up a free cluster in MongoDB Atlas. Configure the database for network security and access. Set up the Data API. Secrect Manager Create the AWS Secret Manager to securely store database credentials. Lambda Function Create Lambda functions with the MongoDB Data APIs or MongoDB drivers as shown in this Github tutorial . AWS AppSync setup Set up AWS Appsync to configure the data source and query. Test API Test the AWS AppSync APIs using the AWS Console or Postman . Figure 3: &nbsp; Test results for the AWS AppSync query Conclusion To learn more, refer to the AppSync Atlas Integration GitHub repository for step-by-step instructions and sample code. This solution can be extended to AWS Amplify for building mobile applications. For further information, please contact partners@mongodb.com .