A wide variety of companies around the world, from innovators in the social media space to industry leaders in energy, are running MongoDB on Google Cloud Platform (GCP). Increasingly, these organizations are consuming MongoDB as a fully managed service with MongoDB Atlas, which boosts the productivity of teams that touch the database by reducing the operational overhead of setup, ongoing management, and performance optimization.

When MongoDB Atlas became available on GCP last June, users were able to run it in 4 regions: us-east1 (South Carolina), us-central1 (Iowa), asia-east1 (Taiwan), europe-west1 (Belgium). This week we’re excited to launch the service across all Google Cloud Platform regions, allowing you to easily deploy and run MongoDB near you.

Most GCP regions are made up of 3 isolated locations called zones where resources can be provisioned. MongoDB Atlas automatically distributes a 3-node replica set across the zones in a region, ensuring that the automated election and failover process can complete successfully if the zone containing the primary node becomes unavailable.

For Atlas deployments in GCP’s Singapore region, which contains 2 zones instead of 3, it’s recommended that users enable Atlas’s cross-region replication to obtain a similar level of redundancy. 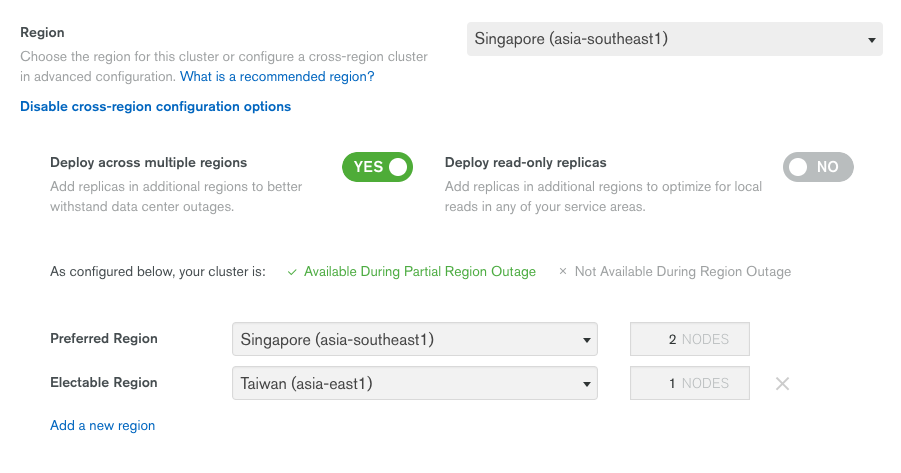 Atlas is available across all GCP regions now. We’re excited to see what you build with MongoDB and Google services!

Not an Atlas user yet? Get started <a href="https://www.mongodb.com/cloud/atlas?jmp=blog" target=_"BLANK">here.