Stream is a platform designed for building, personalizing, and scaling activity feeds that reach over 200 million users. We offer an alternative to building app feed functionality from scratch by simplifying implementation and maintenance so companies can stay focused on what makes their products unique.

Today our feed-as-a-service platform helps personalize user experiences for some of the most engaging applications and websites. For example, Product Hunt, which surfaces new products daily and allows enthusiasts to share and geek out about the latest mobile apps, websites, and tech creations, uses our API to do so.

We’ve recently been working on an application called Winds, an open source RSS and podcast application powered by Stream, that provides a new and personalized way to listen, read, and share content.

We chose MongoDB to support the first iteration of Winds as our developers found the database very easy to work with. I personally feel that the mix of data model flexibility, scalability, and rich functionality that you get with MongoDB makes it superior to what you would get out of the box with other NoSQL databases or tabular databases such as MySQL and PostgreSQL.

Our initial MongoDB deployment was managed by a vendor called Compose but that ultimately didn’t work out due to issues with availability and cost. We migrated off Compose and built our own self-managed deployment on AWS. When MongoDB’s own database as a service, MongoDB Atlas, was introduced to us, we were very interested. We wanted to reduce the operational work that our team was doing and found Atlas’s pricing much more predictable than what we had experienced with our previous MongoDB service provider. We also needed a database service that would be highly available out of the box. The fact that MongoDB Atlas sets a minimum replica set member count and automatically distributes each cluster across AWS availability zones had us sold.

The great thing about managing or scaling MongoDB with MongoDB Atlas is that pretty much almost all of the time, we don’t have to worry about it. We run our application on a deployment using the M30 size instances with the auto-expanding storage option enabled. When our disk utilization approaches 90%, Atlas automatically provisions us more with no impact to availability. And if we experience spikes in traffic like we have in the past, we can easily scale up or out using MongoDB Atlas by either clicking a few buttons in the UI or triggering a scaling event using the API.

Another benefit that MongoDB Atlas has provided us is on the cost savings side. With Atlas, we no longer need a dedicated person to worry about operations or maintaining uptime. Instead, that person can work on the projects that we’d rather have them working on. In addition, our team is able to move much faster. Not only can we make changes on the fly to our application leveraging MongoDB’s flexible data model, but we can deploy any downstream database changes on the fly or easily spin up new clusters to test new ideas. All of these can happen without impacting things in production; no worrying about provisioning infrastructure, setting up backups, monitoring, etc. It’s a real thing of beauty.

In the near future, we plan to look into utilizing change streams from MongoDB 3.6 for our Winds application, which is already undergoing some major upgrades (users can sign up for the beta here). This may eliminate the need to maintain separate Redis instances, which would further increase our savings and reduce architectural complexity. 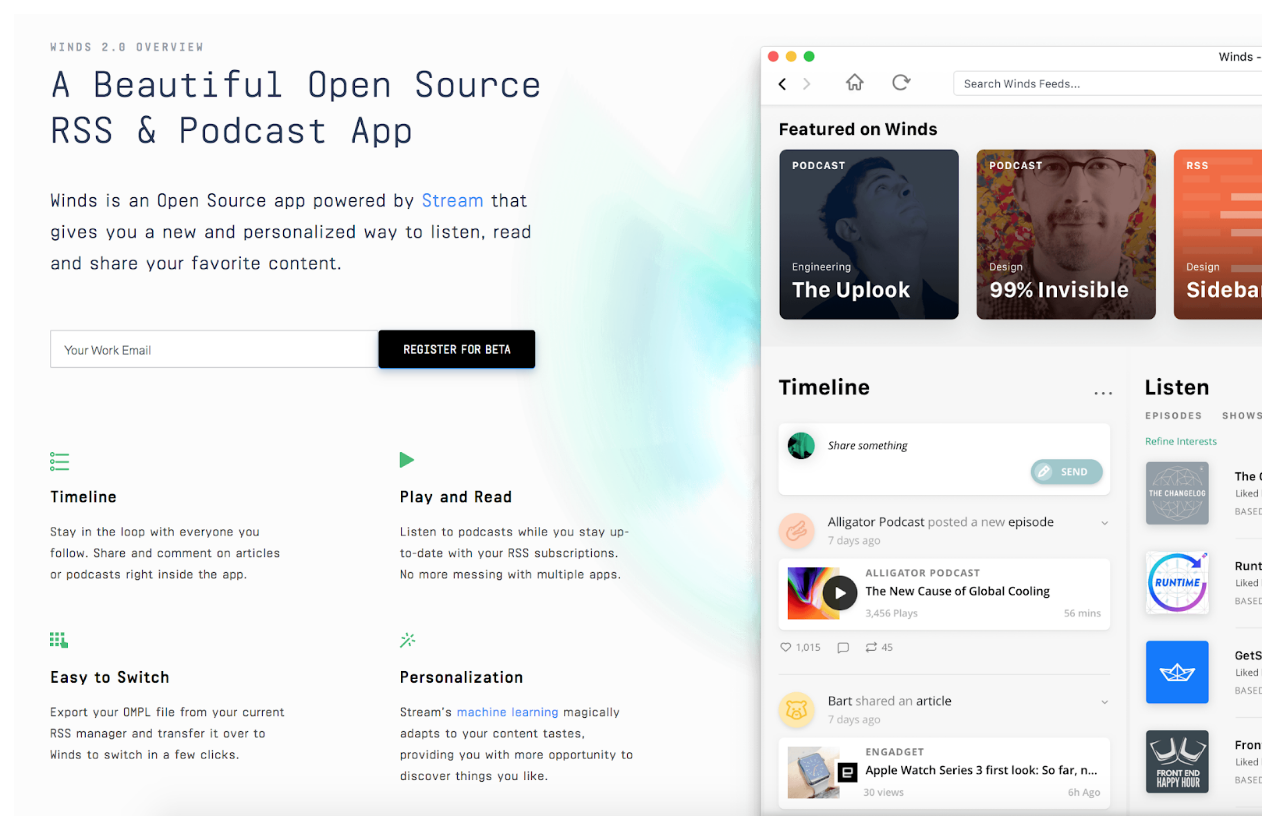 We’re also looking into migrating more applications onto MongoDB Atlas as its built-in high availability, automation, fully managed backups, and performance optimization tools make it a no-brainer. While there are other MongoDB as a service providers out there (Compose, mLab, etc.) available, no other solution comes close to what MongoDB Atlas can provide.

Interested in reducing costs and faster time to market? Get started today with a free 512 MB database managed by MongoDB Atlas.

Be a part of the largest gathering of the MongoDB community. Join us at MongoDB World.
← Previous

Update : May 2, 2018 Our developer preview of MongoDB Enterprise Server running on OpenShift now includes a simple OpenShift Template . The mongodb-openshift-dev-preview.template.yaml template file reduces the complexity and additional requirements of running OpenShift with the --service-catalog enabled and deploying the Ansible Service Broker (not to mention needing to install the apb tool on your development system in order to build and deploy the Ansible Playbook Bundle). Currently the template can provision multiple pods each running an automation agent configured to the same MongoDB Ops Manager Project. You can complete the deployment of a MongoDB replica set with a few quick clicks in the Ops Manager user interface. We hope the removal of these additional dependencies helps you and your organization quickly adopt this modern, flexible, and full featured way to deploy and run MongoDB Enterprise on your OpenShift clusters. And, stay tuned! This is the tip of the iceberg for support of your cloud native workloads from MongoDB. In order to compete and get products to market rapidly enterprises today leverage cloud-ready and cloud-enabled technologies. Platforms as a Service (or PaaS) provide out-of-the-box capabilities which enable application developers to focus on their business logic and users instead of infrastructure and interoperability. This key ability separates successful projects from those which drown themselves in tangential work which never stops. In this blog post, we'll cover MongoDB's general PaaS and cloud enablement strategy as well as touch upon some new features of Red Hat’s OpenShift which enable you to run production-ready MongoDB clusters. We're also excited to announce the developer preview of MongoDB Enterprise Server running on OpenShift. This preview allows you to test out how your applications will interact with MongoDB running on OpenShift. Integration Approach for MongoDB and PaaS Platforms as a Service are increasingly popular, especially for those of you charged with building "cloud-enabled" or "cloud-ready" applications but required to use private data center deployments today. Integrating a database with a PaaS needs to be done appropriately to ensure that database instances can be deployed, configured, and administered properly. There are two common components of any production-ready cloud-enabled database deployment: A modern, rock-solid database (like MongoDB). Tooling to enable telemetry, access and authorization, and backups (not to mention things like proactive alerting that integrates with your chosen issue tracking system, complete REST-based APIs for automation, and a seamless transition to hosted services.) For MongoDB, this is MongoDB Ops Manager . A deep integration of MongoDB Ops Manager is core to our approach of integrating MongoDB with popular PaaS offerings. The general design approach is to use the "separation of concerns" design principle. The chosen PaaS handles the physical or virtual machines, CPU and RAM allotment, persistent storage requirements, and machine-level access control, while MongoDB Ops Manager controls all aspects of run-time database deployments This strategy enables system administrators to quickly deploy "MongoDB as a Solution" offerings within their own data centers. In turn, enterprise developers can easily self-service their own database needs. If you haven't already, download MongoDB Ops Manager for the best way to run MongoDB. MongoDB Enterprise Server OpenShift Developer Preview Our "developer preview" for MongoDB on OpenShift can be found here: https://github.com/jasonmimick/mongodb-openshift-dev-preview . The preview allows provisioning of both MongoDB replica sets and "agent-only" nodes (for easy later use as MongoDB instances) directly through OpenShift. The deployments automatically register themselves with an instance of MongoDB Ops Manager . All the technical details and notes of getting started can be found right in the repo. Here we'll just describe some of functionality and technology used. The preview requires access to an OpenShift cluster running version 3.9 or later and takes advantage of the new Kubernetes Service Catalog features. Specifically, we're using the Ansible Service Broker and have build an Ansible Playbook Bundle which installs an icon into your OpenShift console. The preview also contains an example of an OpenShift template which supports replica sets and similar functionality. A tour and deploying your first cluster: Once you have your development environment ready (see notes in the developer preview Github repository) and have configured an instance of MongoDB Ops Manager you're ready to starting deploying MongoDB Enterprise Server. Clusters can be provisioned through the OpenShift web console or via command line. The web console provides an intuitive "wizard-like" interface in which users specify values for various parameters, such as MongoDB version, storage size allocation, and MongoDB Ops Manager Organization/Project to name a few. Command line installs are also available in which parameter values can be scripted or predefined. This extensibility allows for automation and integration with various Continuous Integration and Continuous Delivery technologies. A future post will detail cluster configuration and various management scenarios, such as upgrades, performance tuning, and troubleshooting connectivity, so stay tuned. We're excited to introduce simple and efficient ways to manage your MongoDB deployments with tools such as OpenShift and Kubernetes. Please try out the developer preview and drop us a line on Twitter #mongodb-openshift or email bd@mongodb.com for more information. Be a part of the largest gathering of the MongoDB community. Join us at MongoDB World .

Over the course of a year, the coronavirus pandemic has left a lasting impact on every aspect of the tech space — including applications, data, business models, and much more. To help developers build new skills and adapt to this new landscape, MongoDB.live will include keynotes, workshops, breakout sessions, and Q&A panels on the present and future of data. MongoDB.live will run from July 13-14, and will have something for everyone — whether you’re a seasoned DevOps engineer or a new database administrator. Here are ten things to look forward to at MongoDB.live: Learn a new skill — whether it’s an unfamiliar topic that piques your curiosity, or a subject you’ve always wanted to know more about. With countless workshops and talks spread across 9 tracks, from Security and Operations to Backend Development, there’s something to address all interests and abilities. Hone your soft skills too — in case you’re up for a promotion or have your eye on moving into management. You’ll learn how to empower direct reports, build inclusive teams, streamline inefficient processes and workflows, and much more. Be the first to get the scoop on MongoDB product releases. See what’s new in MongoDB 5.0 and Atlas — and sign up to preview and beta test the latest features. Drop in on a partner talk to see how MongoDB interfaces with other companies and technologies. Learn how to use different drivers, platforms, libraries, or languages in tandem with MongoDB. Dive into the Internet of Things (IoT). Learn to build a complex, multi-cloud IoT project using MongoDB and PeerIslands, see how Bosch.IO used MongoDB to revolutionize automotive IoT and quality assurance testing, or examine the ethical dilemmas of IoT design. Make the most of the MongoDB application data platform. Learn to monitor performance on Realm Sync, optimize data flow with Atlas Data Lake, and validate schema in MongoDB to prevent data inconsistency. Rethink everything you know about data and development. Attend talks on reimagining the way coding is taught, see how Rent the Runway uses MongoDB Atlas to help automate its warehouse operations, and experience the (r)evolutionary new capabilities of MongoDB 5.0. Follow along with step-by-step tutorials for everything from mastering the use of the MongoDB command line to securing your cloud-native applications. Check out exciting new stacks and development frameworks, including FARM (FastAPI, React, and MongoDB), JAMStack with MongoDB, and more. Speed up innovation, reduce risk, and build better applications. See how other companies are using MongoDB to stream live data, sequence the coronavirus, or migrate to the cloud. Listen to talks from organizations like HSBC, Porsche, Shutterfly, and Oxford Nanopore, see interesting projects, and pick up some inspiration for yourself. This is just a small sample of what to expect at MongoDB.live. This free, virtual event will be bursting with plenty of other activities, including networking opportunities, interactive Q&A panels, games, and much more. Register today to reserve your seat. We can’t wait to see you there!