Welcome to the final part of our single view blog series

If you want to get started right now, download the complete 10-Step Methodology to Creating a Single View whitepaper.

As a reminder, figure 1 shows the 10-step methodology to creating the single view.

In parts 1 and 2 of the blog series, we stepped through each of the methodology’s steps. Lets now take a look at a roadmap for the single view – something we call the Maturity Model.

What are the advantages of writing directly to the single view?

Figure 3 shows an architectural approach to synchronizing writes against the single view back to the source systems. Writes to the single view are pushed into a dedicated update queue, or directly into an ETL pipeline or message queue. Again, MongoDB consulting engineers can assist with defining the most appropriate architecture.

**Figure 3**: Writing to the single view

The database used to store and manage the single view provides the core technology foundation for the project. Selection of the right database to power the single view is critical to determining success or failure.

Relational databases, once the default choice for enterprise applications, are unsuitable for single view use cases. The database is forced to simultaneously accommodate the schema complexity of all source systems, requiring significant upfront schema design effort. Any subsequent changes in any of the source systems’ schema – for example, when adding new application functionality – will break the single view schema. The schema must be updated, often causing application downtime. Adding new data sources multiplies the complexity of adapting the relational schema.

MongoDB provides a mature, proven alternative to the relational database for enterprise applications, including single view projects. As discussed below, the required capabilities demanded by a single view project are well served by MongoDB:

MongoDB's document data model makes it easy for developers to store and combine data of any structure within the database, without giving up sophisticated validation rules to govern data quality. The schema can be dynamically modified without application or database downtime. If, for example, we want to start to store geospatial data associated with a specific customer event, the application simply writes the updated object to the database, without costly schema modifications or redesign.

MongoDB documents are typically modeled to localize all data for a given entity – such as a financial asset class or user – into a single document, rather than spreading it across multiple relational tables. Document access can be completed in a single MongoDB operation, rather than having to JOIN separate tables spread across the database. As a result of this data localization, application performance is often much higher when using MongoDB, which can be the decisive factor in improving customer experience.

With all relevant data for our business entity consolidated into a single view, it is possible to run sophisticated analytics against it. For example, we can start to analyze customer behavior to better identify cross-sell and upsell opportunities, or risk of churn or fraud. Analytics and machine learning must be able to run across vast swathes of data stored in the single view. Traditional data warehouse technologies are unable to economically store and process these data volumes at scale. Hadoop-based platforms are unable to serve the models generated from this analysis, or perform ad-hoc investigative queries with the low latency demanded by real-time operational systems.

The MongoDB query language and rich secondary indexes enable developers to build applications that can query and analyze the data in multiple ways. Data can be accessed by single keys, ranges, text search, graph, and geospatial queries through to complex aggregations and MapReduce jobs, returning responses in milliseconds. Data can be dynamically enriched with elements such as user identity, location, and last access time to add context to events, providing behavioral insights and actionable customer intelligence. Complex queries are executed natively in the database without having to use additional analytics frameworks or tools, and avoiding the latency that comes from ETL processes that are necessary to move data between operational and analytical systems in legacy enterprise architectures. 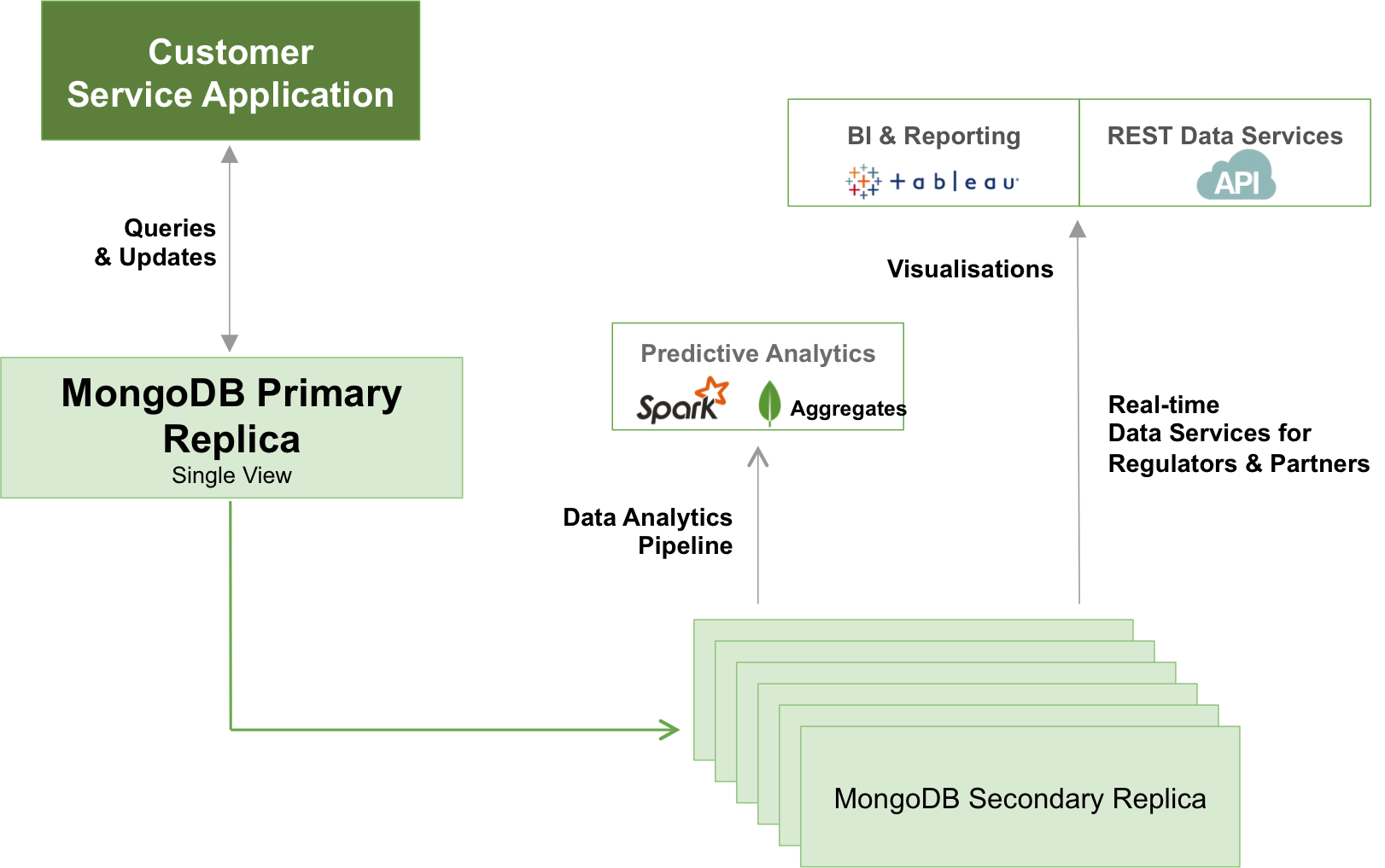 Successful single view projects tend to become very popular, very quickly. As new data sources and attributes, along with additional consumers such as applications, channels, and users are onboarded, so demands for processing and storage capacity quickly grow.

To address these demands, MongoDB provides horizontal scale-out for the single view database on low cost, commodity hardware using a technique called sharding, which is transparent to applications. Sharding distributes data across multiple database instances. Sharding allows MongoDB deployments to address the hardware limitations of a single server, such as bottlenecks in CPU, RAM, or storage I/O, without adding complexity to the application. MongoDB automatically balances single view data in the cluster as the data set grows or the size of the cluster increases or decreases.

MongoDB maintains multiple replicas of the data to maintain database availability. Replica failures are self-healing, and so single view applications remain unaffected by underlying system outages or planned maintenance. Replicas can be distributed across regions for disaster recovery and data locality to support global user bases.

MongoDB can be run on a variety of platforms – from commodity x86 and ARM-based servers, through to IBM Power and zSeries systems. You can deploy MongoDB onto servers running in your own data center, or public and hybrid clouds. With the MongoDB Atlas service, we can even run the database for you.

MongoDB Enterprise Advanced is the production-certified, secure, and supported version of MongoDB, offering:

MongoDB has been used in many single view projects. The following case studies highlight several examples.

MetLife: From Stalled to Success in 3 Months

In 2011, MetLife’s new executive team knew they had to transform how the insurance giant catered to customers. The business wanted to harness data to create a 360-degree view of its customers so it could know and talk to each of its more than 100 million clients as individuals. But the Fortune 50 company had already spent many years trying unsuccessfully to develop this kind of centralized system using relational databases.

Which is why the 150-year old insurer turned to MongoDB. Using MongoDB’s technology over just 2 weeks, MetLife created a working prototype of a new system that pulled together every single relevant piece of customer information about each client. Three months later, the finished version of this new system, called the 'MetLife Wall,' was in production across MetLife’s call centers.

CERN: Delivering a Single View of Data from the LHC to Accelerate Scientific Research and Discovery

The European Organisation for Nuclear Research, known as CERN, plays a leading role in the fundamental studies of physics. It has been instrumental in many key global innovations and breakthroughs, and today operates the world's largest particle physics laboratory. The Large Hadron Collider (LHC) nestled under the mountains on the Swiss - Franco border is central to its research into origins of the universe.

Using MongoDB, CERN built a multi-data center Data Aggregation System accessed by over 3,000 physicists from nearly 200 research institutions across the globe. MongoDB provides the ability for researchers to search and aggregate information distributed across all of the backend data services, and bring that data into a single view.

MongoDB was selected for the project based on its flexible schema, providing the ability to ingest and store data of any structure. In addition, its rich query language and extensive secondary indexes gives users fast and flexible access to data by any query pattern. This can range from simple key-value look-ups, through to complex search, traversals and aggregations across rich data structures, including embedded sub-documents and arrays.

You can learn more from the case study.

That wraps up our 3-part blog series. Bringing together disparate data into a single view is a challenging undertaking. However, by applying the proven methodologies, tools, and technologies, organizations can innovate faster, with lower risk and cost.

Remember, if you want to get started right now, download the complete 10-Step Methodology to Creating a Single View whitepaper.

Last month we announced the Free Tier in MongoDB Atlas and the availability of MongoMirror, a downloadable utility that makes migrating live MongoDB replica sets easy. We’ve since incorporated the same live migration functionality into MongoDB Atlas, our database as a service, and updated the platform with some new features. Live Migration Live migration allows us to automate the import of any pre-existing MongoDB 3.0+ replica set into MongoDB Atlas. It works by performing an initial sync between a source database and a target database in Atlas, and then tailing the source oplog to keep the database in Atlas in sync with live updates from your application. To use live migration, we’ll first need to create a dedicated (M10 or above) Atlas cluster. In the example below, we’ve created a cluster with M30-size instances in US-EAST-1. You can see from the screenshot below that we now have a new option, “Migrate Data to this Cluster”. We’ll need the following for the migration: Hostname: Port of the primary of our source replica set Username/password (if authentication is enabled) CAFile (if running MongoDB with SSL enabled and the --sslCAFile option) Once we have this information, we’re ready to select “I’M READY TO MIGRATE”. We’ll then be brought to a new window that asks for the location of our source replica set and credentials. The “VALIDATE” button at the bottom of the window checks to make sure that MongoDB Atlas can tail our source oplog to make sure that new operations are captured. Clicking the “START MIGRATION” button kicks it off. We’ll get an email notification when it’s time to cut over to MongoDB Atlas; all we have to do to finalize the migration process is modify the database connection string in our app. For a more detailed walkthrough of Live Migration in MongoDB Atlas, click here . Now in (almost) all AWS regions MongoDB Atlas is now available in most AWS regions, which means users around the world can leverage the database service with minimal geographical latency. As a reminder, MongoDB Atlas’ support for VPC Peering means teams can easily and securely connect their own VPCs to a new Atlas cluster in one of the new regions. AWS Regions (Americas) AWS Regions (APAC) AWS Regions (EMEA) us-east-1 (N. Virginia) ap-southeast-2 (Sydney) eu-west-1 (Dublin) <tr> <td>us-west-2 (Oregon)</td> <td>ap-southeast-1 (Singapore)</td> <td>eu-west-2 (London)</td> </tr> <tr> <td>us-east-2 (Ohio)</td> <td>ap-northeast-1 (Tokyo)</td> <td>eu-central-1 (Frankfurt)</td> </tr> <tr> <td>us-west-1 (N. California)</td> <td>ap-northeast-2 (Seoul)</td> </tr> <tr> <td>ca-central-1 (Canada)</td> <td>ap-south-1 (Mumbai)</td> </tr> <tr> <td>sa-east-1 (São Paulo)</td> </tr> Queryable backup snapshots Also new in MongoDB Atlas is the ability to query backup snapshots and restore data at the document level in minutes. No longer do we need to restore an entire cluster when all we really need is a small subset of our data. Within the Atlas UI, we can now select a backup snapshot and click on the new “Query” option. We can opt to use a downloadable Backup Tunnel, which handles the security for connecting to our backup instance, and use the mongo shell or a MongoDB driver to connect to our backup via the tunnel. For a walkthrough of using queryable backups in Atlas, click here . Explore your databases from the Atlas UI Finally, the new Data Explorer in MongoDB Atlas allows us run queries, view metadata about our databases and collections, and see index usage statistics without resorting to the mongo shell. We can access the Data Explorer for dedicated Atlas clusters by selecting the new “DATA” button associated with our databases. This will bring us to a new view, shown below. All of these new features are now live in MongoDB Atlas . As always, we’d love to hear your feedback at mongodb-atlas@mongodb.com ! Discuss on Hacker News Get started on the Atlas free tier