Live migration in MongoDB Atlas enables users to import data from MongoDB deployments running in other environments and cut over to a fully managed database service, giving you industry best practice security by default, advanced features to streamline operations and performance optimization, and the latest versions of MongoDB.

Today, we’re introducing two new enhancements to MongoDB Atlas live migration that make it easier than ever for users to take advantage of the official cloud database service for MongoDB with minimal impact to their applications.

Upgrading to a new database version may seem like routine work for some, but, as battle-hardened IT operators know, can have complexities and require plenty of strategy and foresight.

Between all the applications and end users you have, the prospect of upgrading to a new release can be a major undertaking requiring significant planning. While some of our Enterprise and Community customers love to upgrade to the latest release as soon as possible to get new features and performance improvements, others take a more measured approach to upgrading.

Using live migration, you can migrate from any MongoDB 2.6 replica set to a MongoDB 3.2+ cluster on MongoDB Atlas. This requires no backend configuration, no downtime, and no upgrade scripting. Once our migration service is able to communicate with your database, it will do all the heavy lifting.

The migration service works by:

Given that you’re upgrading a critical part of your application, you do need to be wary of how your application’s compatibility with the database might change, and for that we recommend the following stages are included in your upgrade plan: 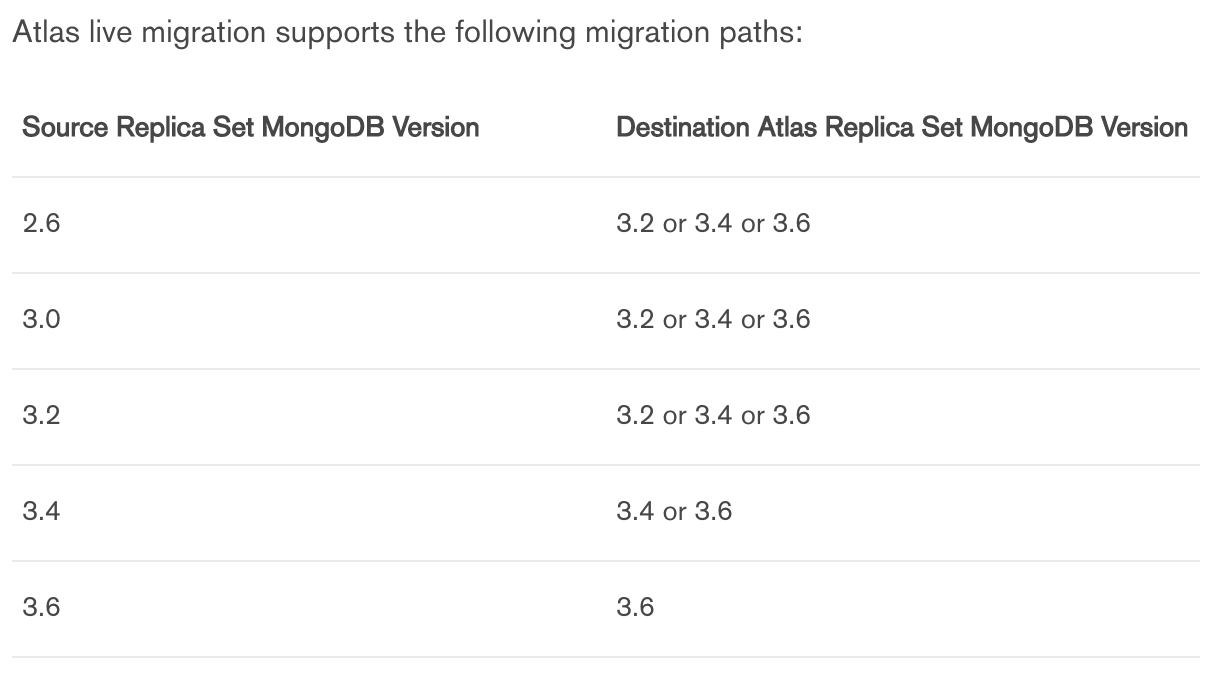 Until today, migrating a sharded MongoDB deployment with minimal downtime has been difficult. The live migration tool now makes this possible for customers looking to move their data layer into MongoDB Atlas.

When performing a live migration on a sharded cluster, we recommend that in addition to following the process listed above, that you also consider the following:

Ready to migrate to MongoDB Atlas?

How Voya.ai uses MongoDB Atlas to Bring a Seamless Customer Experience to the Business Travel Market

As consumer travel apps like Expedia and Kayak are continuously innovating to provide more seamless booking experiences for their customers, their B2B counterparts can seem very outdated in comparison. Hamburg-based startup, Voya.ai is looking to change that. We recently sat down with Voya’s CTO, Pepijn Schoen, to learn more about how they are using MongoDB alongside natural language processing and machine learning to bring B2B travel booking into 2018 with their chat-based app. MongoDB: Tell me about Voya. Pepijn Schoen: Voya is a purely digital, business travel app that brings the convenience and customer experience of B2C travel booking tools to the B2B market. We use a chat-based, conversational interface to interpret our users’ travel needs and extract the search parameters using natural language processing. We started the company in 2015 and after winning the Best Travel Technology Award in 2016, grew the company to a now 50-people team of travel experts, servicing 150 companies with their business travel needs. What about the B2B travel booking market are you trying to disrupt? Most of the tools businesses use today were created 10 to 20 years ago. Since then, companies like Expedia, Kayak, and Booking.com have transformed our expectations of what a travel booking experience should be like. In addition, today’s business travel booking process includes many different layers of vendors. For example, a company may work with different vendors for flights, car rental, and hotels on top of vendors for expense management and for providing the search and booking front end. All of this creates unnecessary friction for the end user. Voya allows a direct, simple solution for business travelers to create itineraries that comply with company policies and expense processes. Tell me about how Voya is using AI. We use artificial intelligence in two primary ways. Firstly, we use natural language processing to interpret chat-based user inputs. For most requests, the entire booking experience can be handled this way, but we also have a mechanism to connect the user to a live agent for more complex requests. Secondly, we have built a proprietary flight and hotel matching engine that considers a multitude of different parameters when recommending travel options to a user. For example, companies may have price or airline restrictions, users may have a preference for a certain rewards program, and nearly all business travellers prefer shorter, more direct routes over long layovers. Our matching engine considers these factors to suggest the best flights and hotels. What tools and technologies are you using to make this possible? Our NLP is powered by a Java-based application using Google Dialogflow and the Layer API for messaging. The rest of our stack includes AngularJS (including Angular 4 and 5), Python, .NET, MySQL, and MongoDB in AWS via MongoDB Atlas . We also use Kubernetes which makes our deployment very portable. For example, we can leverage Google technologies while keeping our primary datastores in AWS. How are you using MongoDB? We use MongoDB to store data about almost every one of the approximately 1.5 million hotels in the world. The support for GeoJSON was one of the key reasons we decided to build on MongoDB, and we feel it is the best option to power our geolocation searches. By storing hotel location and metadata in MongoDB, we can then let our users easily find matching properties by generating geospatial queries behind the scenes without custom application code. There was a learning curve with this technology. For example, we had to troubleshoot a query that was dependent on a 2D index, rather than a more appropriate 2Dsphere index to take into consideration the fact that the Earth is not flat! Currently, we query with a bounding box, but cities are never perfect squares and are therefore best approximated with polygons. We could definitely improve the accuracy of the data we get back from this type of query by using a more complex model. Why did you decide to use MongoDB Atlas? Originally, Voya was built on a single EC2 instance in AWS and we were running several other tools in a similar way. Rather than spread ourselves too thin building scalable, always-on, backed up clusters ourselves, we explicitly looked for managed service— MongoDB Atlas was a great fit. The other advantage of building on MongoDB Atlas is that it allows us to expand globally without significant time investments from our team. Our application is currently available in English and German, with most of our users in Central Europe, so we minimize latency by running our MongoDB cluster in AWS’s Frankfurt region. As our user base expands, the ability to take advantage of multi-region replication to maintain this level of service will be incredibly valuable. What’s next for Voya? As a full-service travel solution, we are constantly looking at fulfilling our customer’s travel needs. To us, the fragmentation in business travel, with separate travel management companies and online bookings tools, didn't make sense. That's why we've unified them in one solution. To this, we're adding expense management. Travel expenses are a huge pain for many, wasting hours of travelers’ time tracking receipts manually and filling in forms in Excel for their accounting department. Technologically, this will bring another challenge for us, as we're trying to encode applicable local legislation (which can change annually) in MongoDB. For example, returning from a business trip to Copenhagen, Denmark, and continuing onwards to Bucharest the same day, requires precise understanding of the applicable allowances. Additionally, we're continuously investing in artificial intelligence to decrease the turnaround time for travel requests. Our travel experts are there to help reroute you if you miss your New York - London flight, but we're working towards a state where all flight and hotel requests are completely automated. Learn more about MongoDB Atlas