At AWS re:Invent, we demonstrated how MongoDB Mobile, MongoDB Stitch, and AWS services could be used to build a cloud-controlled Mars rover – read the overview post for the setup. This post focuses on how the mission control app records the user commands in MongoDB Atlas.

Mission Control is a simple web application that we ran on an iPad. The web app takes commands from the user through its UI which displays directions for the rover to travel in. Each command sets the rover off in that direction for a short fixed amount of time. 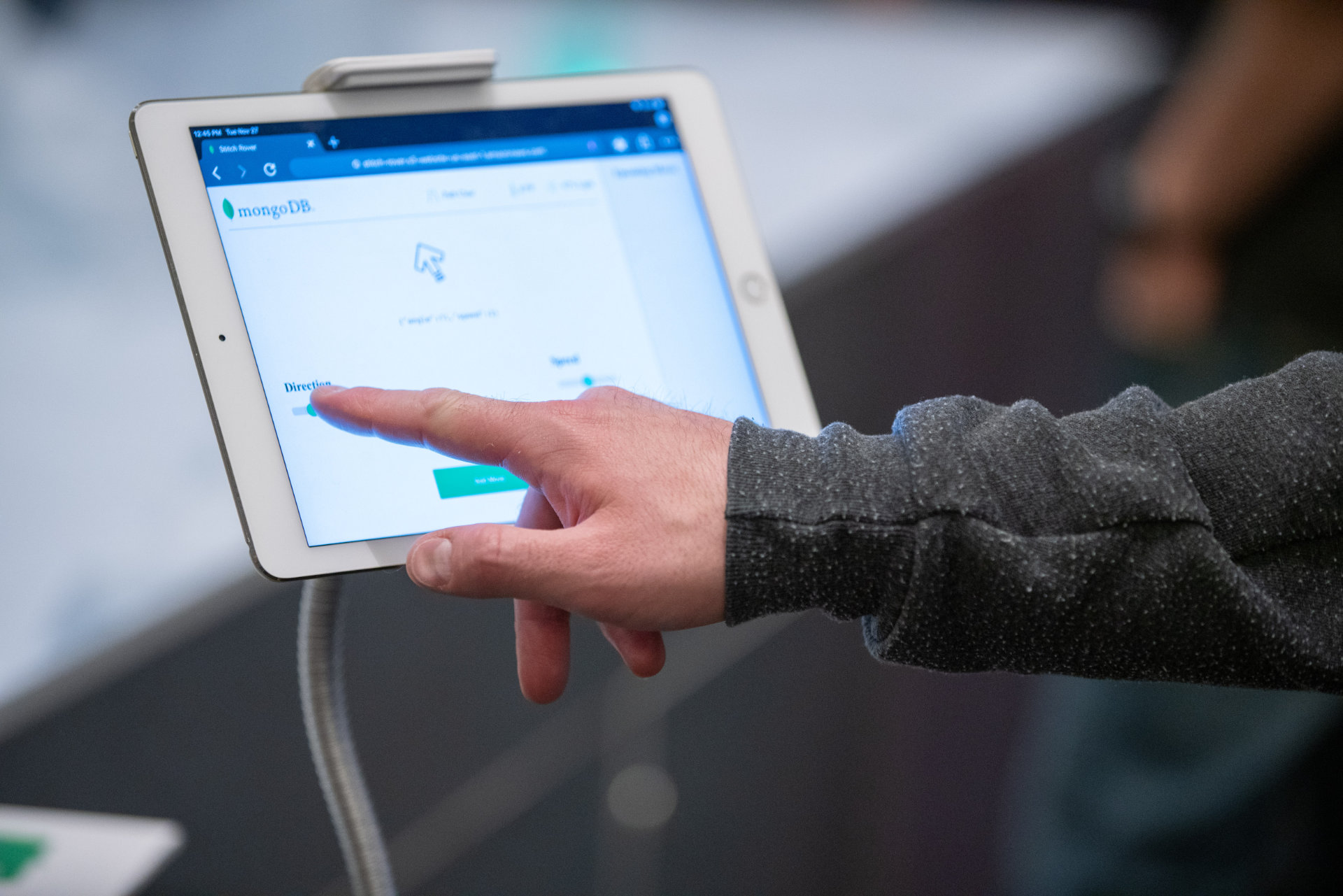 Rather than sending the command directly to the rover, and as Mars is a long way away and network connections are not always reliable, the app stores the commands in an array within the rover's document in Atlas – in that way, commands can be queued up and sent to the rover as soon as it's back online.

This is what the document looks like after a few commands have been submitted (but not yet acted on by the rover):

A traditional way of access the database from the frontend app would be to stand up an app server, implement a custom REST API and data access control layer, and then send the commands to it from the frontend app. MongoDB Stitch massively simplifies that workflow by letting a web (or mobile) app execute MongoDB Query Language operations directly – removing the need for thousands of lines of boilerplate code.

When we explained this access model to demo visitors, some were nervous about this approach as we've been taught that the schema and database access should be hidden from the frontend (remember SQL injection attacks?). Fortunately, Stitch QueryAnywhere is made up of two components – the first is the Stitch SDK that enables direct access to the database, the second is the sophisticated, fine-grained user access controls provided by the Stitch service. If that doesn't allay your fears then you have the option to obfuscate the schema by accessing the database through Stitch Functions.

Updating the document from the web app is a cinch with Stitch. The first step is to import the Stitch SDK:

The second step is to create the object/document for the command and push it onto the moves array within this rover's document in the rover.rovers collection:

If you are used to working with the MongoDB Query Language from an app server, that should seem very familiar. The only thing that might catch your eye is that __stitch_sync_version.v. That’s part of how this update will get to the MongoDB Mobile database embedded in the rover. We’ll explain that in the next part.

If you can't wait then you can find all of the code in the Stitch Rover GitHub repo.

Earlier in the year, we announced the availability of MongoDB Charts Beta , the fastest and easiest way to build visualizations of MongoDB data. Today at Mongodb.local San Francisco, we are excited to announce that an update to the beta is now available and integrated into MongoDB Atlas, our hosted database as a service platform. This means that Atlas users can now visualize their data and share with their team, without the need to install or maintain any servers or tools. Getting started with MongoDB Charts in Atlas couldn’t be simpler. After logging into Atlas , select the Project with the clusters containing the data you want to visualize and click the Charts link in the left navigation bar. After a one-time step to activate Charts, you will be ready to start charting! MongoDB Charts(Beta) inside MongoDB Atlas If you’ve used MongoDB Charts before, the new Atlas-integrated version will be instantly familiar. The main difference is that you can easily add data sources from any Atlas clusters in your project without needing to enter a connection URI. You’re also freed from the burden of managing users separately, with all Atlas Project members able to access Charts with their existing Atlas credentials provided they have Data Access Read Only role or higher. New Data Source We’ve also been busy adding some of the most requested features to the charting experience. Charts has always been great at handling MongoDB’s flexible schema, allowing you to build charts from document-based data that contains nested documents or arrays. In this latest release, we’ve added a number of options for chart authors to customize their charts, including changing axis titles, colors, date formats and more. Sample Line Chart After you’ve created a few charts, you can arrange them on a dashboard to get all of the information you need at a glance. Dashboards can be kept private, shared with selected individuals, or with everyone in your project team. Sample Dashboard If you’re not currently using Atlas, we haven’t forgotten about you. MongoDB Charts Beta is also still available to install into your own server environment, allowing you to visualize data from any MongoDB server. We’ll be refreshing the on-premises beta to include the same charting enhancements as seen in the new Atlas version over the coming weeks. We hope you enjoy this update and that it helps you get the insight you need from your data. If you have any questions or feature requests, you can always send a note to the Charts team by clicking the support button on the bottom of every page. Happy Charting!