Raphael Londner
November 26, 2017 | Updated: June 26, 2020
It's that time of year again! This post is part of our Road to AWS re:Invent 2017 blog series. In the weeks leading up to AWS re:Invent in Las Vegas this November, we'll be posting about a number of topics related to running MongoDB in the public cloud. See all posts here.

This is Part 3 of our Amazon Lex blog post series, part of our larger Road to re:Invent 2017 series. As a reminder, this tutorial is divided into 3 parts:

Please follow the deployment steps available in this GitHub repository. I have chosen to use Amazon’s SAM Local tool to showcase how you can test your Lambda function locally using Docker, as well as package it and deploy it to an AWS account in just a few commands. However, if you’d like to deploy it manually to the AWS Console, you can always use this zip script to deploy it in pretty much the same way I did in this MongoDB Atlas with Lambda tutorial.

Now that our Lambda fulfillment function has been deployed, let’s test our bot again in the Amazon Lex console and verify that we get the expected response. For instance, we might want to search for all the romance movies Jennifer Aniston starred in, a scenario we can test with the following bot conversation: 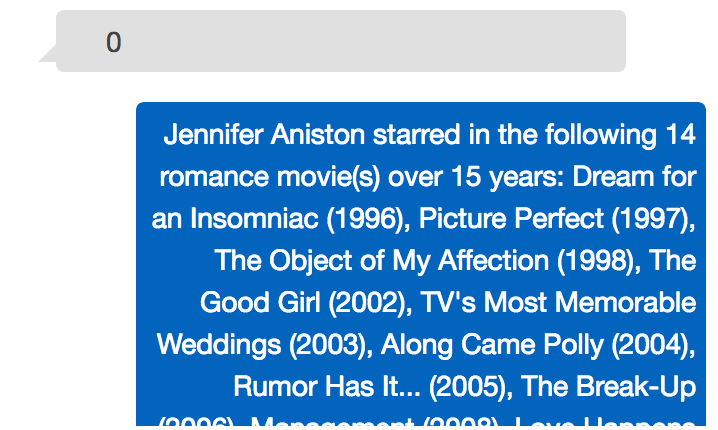 Our Lambda function always receives a JSON payload with a structure compliant with Amazon Lex’ input event format (as this event.json file is):

Note that the request contains the bot’s name (SearchMoviesBot) and the slot values representing the answers to the bot’s questions provided by the user.

The Lambda function starts with the exports.handler method which validates the bot’s name and performs some additional processing if the payload is received through Amazon API Gateway (this is only necessary if you want to test your Lambda function through Amazon API Gateway but is not relevant in an Amazon Lex context). It then calls the dispatch() method, which takes care of connecting to our MongoDB Atlas database and passing on the bot’s intent to the query() method, which we’ll explore in a second. Note that the dispatch() method uses the performance optimization technique I highlighted in Optimizing AWS Lambda performance with MongoDB Atlas and Node.js, namely not closing the database connection and using the callbackWaitsForEmptyEventLoop Lambda context property. This allows our bot to be more responsive after the first query fulfilled by the Lambda function.

Let’s now take a closer look at the query() method, which is the soul and heart of our Lambda function. First, that method retrieves the cast member, movie genre, and movie release year. Because these values all come as strings and the movie release year is stored as an integer in MongoDB, the function must convert that value to an integer.

We then build the query we will run against MongoDB:

We first restrict the query to items that are indeed movies (since the database also stores TV series) and we exclude some irrelevant movie genres such as the documentary and news genres. We also make sure we only query movies in which the cast member starred. Note that the $in operator expects an array, which is why we have to wrap our unique cast member into the castArray array. Since the cast member is the only mandatory query parameter, we add it first and then optionally add the Genres and Year parameters if the code determines that they were provided by the user (i.e. the user did not use the All and/or 0 escape values).

The meat of the query() method happens next as the code performs the database query using 2 different methods: the classic db.collection.find() method and the db.collection.aggregate() method. The default method used in this Lambda function is the aggregate one, but you can easily test the find() method by setting the *aggregationFramewor*k variable to false.

In our specific use case scenario (querying for one single cast member and returning a small amount of documents), there likely won’t be any noticeable performance or programming logic impact. However, if we were to query for all the movies multiple cast members each starred in (i.e. the union of these movies, not the intersection), the aggregation framework query is a clear winner. Indeed, let’s take a closer look at the find() query the code runs:

It’s a fairly simple query that retrieves the movie’s title and year, sorted by year. Note that we also use the same { locale: "en", strength: 1 } collation we used to create the case-insensitive index on the Cast property in Part 2 of this blog post series. This is critical since the end user might not title case the cast member’s name (and Lex won’t do it for us either).

The simplicity of the query is in contrast to the relative complexity of the app logic we have to write to process the result set we get with the find() method:

First, we have to iterate over all the results to concatenate its Title and Year properties into a legible string. This might be fine for 20 items, but if we had to process hundreds of thousands or millions of records, the performance impact would be very noticeable. We further have to remove the last period and white space characters of the concatenated string since they’re in excess. We also have to manually retrieve the number of movies, as well as the low and high ends of the movie release years in order to compute the time span it took the cast member to shoot all these movies. This might not be particularly difficult code to write, but it’s clutter code that affects app clarity. And, as I wrote above, it definitely doesn’t scale when processing millions of items.

Contrast this app logic with the succinct code we have to write when using the aggregation framework method:

The code is not only much cleaner and concise now, it’s also more generic, as it can handle the situation where we want to process movies for each of multiple cast members. You can actually test this use case by uncommenting the following line earlier in the source code:

and by testing it using this SAM script.

With the aggregation framework, we get the correct raw and final results without changing a single line of code:

However, the find() method’s post-processing requires some significant effort to fix this incorrect output (the union of comedy movies in which Angelina Jolie or Brad Pitt starred in, all incorrectly attributed to Brad Pitt):

We were able to achieve this code conciseness and correctness by moving most of the post-processing logic to the database layer using a MongoDB aggregation pipeline:

Once the matching movies have been retrieved from our MongoDB Atlas database, the code generates the proper response message and sends it back to the bot according to the expected Amazon Lex response format:

Our Jennifer Aniston fan can now be wowed by the completeness of our bot's response! 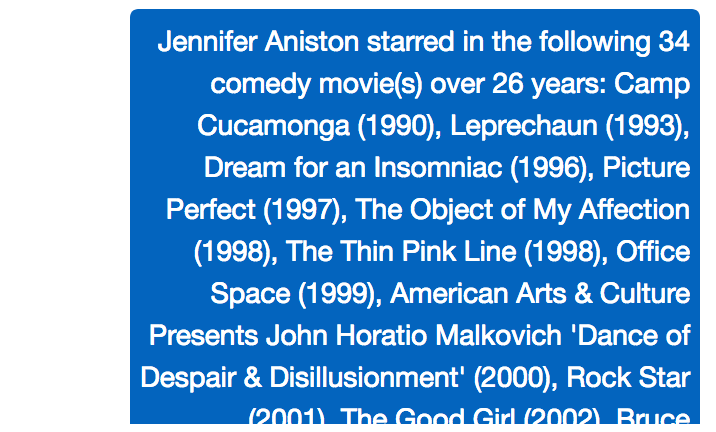 Wrap-up and next steps

This completes our Lex blog post series and I hope you enjoyed reading it as much as I did writing it.

In this final blog post, we tested and deployed a Lambda function to AWS using the SAM Local tool.

As next steps, I suggest you now take a look at the AWS documentation to learn how to deploy your bot to Facebook Messenger , Slack or to your own web site.

4 Steps to Success: From Surviving with Legacy Systems to Thriving with MongoDB