Raphael Londner
November 13, 2017 | Updated: June 26, 2020
It's that time of year again! This post is part of our Road to AWS re:Invent 2017 blog series. In the weeks leading up to AWS re:Invent in Las Vegas this November, we'll be posting about a number of topics related to running MongoDB in the public cloud. See all posts here.

This is Part 2 of our Road to re:Invent 2017 blog post series. If you haven’t read it yet, take a look at Part 1 for a brief overview of Amazon Lex and instructions to set up our movie database with MongoDB Atlas, our fully managed database service.

As a reminder, this tutorial is divided into 4 parts:

In this blog post, we will set up our Lex bot in the AWS Console and verify that its basic flow works as expected. We’ll implement the business logic (which leverages MongoDB) in Part 3 of this post series.

In this section, we will go through the whole process of creating our SearchMovies bot while explaining the architectural decisions I made.

After signing in into the AWS Console, select the Lex service (in the Artificial Intelligence section) and press the Create button.

Select the Custom bot option and fill out the form parameters as follows:

Press the Create button at the bottom of the form.

A new page appears, where you can create an intent. Press the Create Intent button and in the Add intent pop-up page, click the Create new intent link and enter SearchMovies in the intent name field.

In the Slot types section, add a new slot type with the following properties: 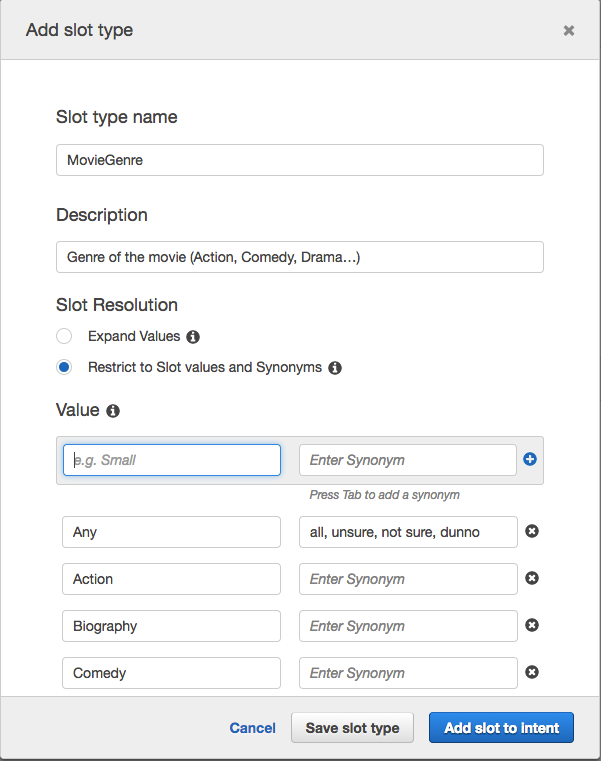 You can add synonyms to all these terms (which strictly match the possible values for movie genres in our sample database), but the most important one for which you will want to configure synonyms is the Any value. We will use it as a keyword to avoid filtering on movie genre in scenarios when the user cannot qualify the genre of the movie he’s looking for or wants to retrieve all the movies for a specific cast member. Of course, you can explore the movie database on your own to identify and add other movie genres I haven’t listed above. Once you’re done, press the Save slot type button.

Next, in the Slots section, add the following 3 slots:

Press the Save Intent button and verify you have the same setup as shown in the screenshot below:

The order of the slots is important here: once the user’s first utterance has been detected to match a Lex intent, the Lex bot will (by default) try to collect the slot values from the user in the priority order specified above by using the Prompt texts for each slot. Note that you can use previously collected slot values in subsequent slot prompts, which I demonstrate in the ‘year’ slot. For instance, if the user answered Angelina Jolie to the castMember slot prompt, the year slot prompt will be: ‘Do you know the year Angelina Jolie’s movie was released? If not, just type 0

Note that it’s important that all the slots are marked Required. Otherwise, the only opportunity for the user to specify them is to mention them in the original utterance. As you will see below, we will provide such ability for Lex to identify slots right from the start, but what if the user chooses to kick off the process without mentioning any of them? If the slots aren’t required, they are by default overlooked by the Lex bot so we need to mark them Required to offer the user the option to define them.

But what if the user doesn’t know the answer to those prompts? We’ve handled this case as well by defining "default" values: All for the genre slot and 0 for the year slot. The only mandatory parameter the bot’s user must provide is the cast member’s name; the user can restrict the search further by providing the movie genre and release year.

Last, let’s add the following sample utterances that match what we expect the user will type (or say) to launch the bot:

Once the utterances are configured as per the screenshot below, press Save Intent at the bottom of the page and then Build at the top of the page. The process takes a few seconds, as AWS builds the deep learning model Lex will use to power our SearchMovies bot. 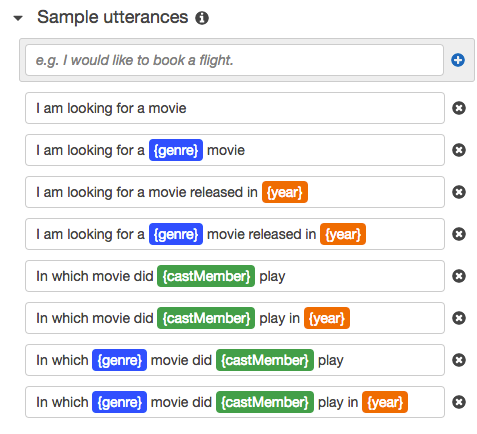 It’s now time to test the bot we just built!

Once the build process completes, the test window automatically shows up: 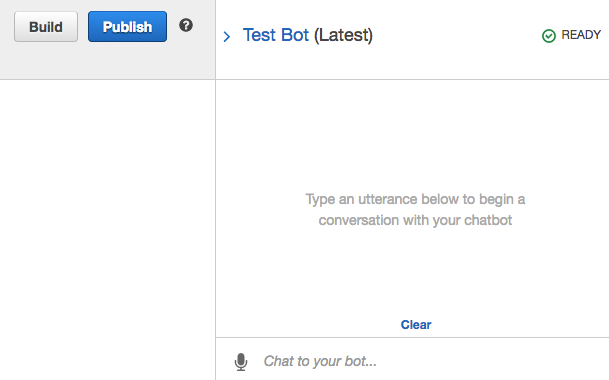 Test the bot by typing (or saying) sentences that are close to the sample utterances we previously configured. For instance, you can type ‘Can you help me find a movie with Angelina Jolie?’ and see the bot recognize the sentence as a valid kick-off utterance, along with the {castMember} slot value (in this case, ‘Angelina Jolie’). This can be verified by looking at the Inspect Response panel: 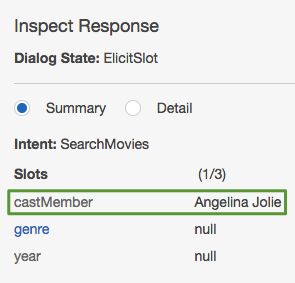 At this point, the movie genre hasn’t been specified yet, so Lex prompts for it (since it’s the first required slot). Once you answer that prompt, notice that Lex skips the second slot ({castMember}) since it already has that information.

Conversely, you can test that the ‘Can you help me find a comedy movie with angelina jolie?’ utterance will immediately prompt the user to fill out the {year} slot since both the {castMember} and {genre} values were provided in the original utterance: 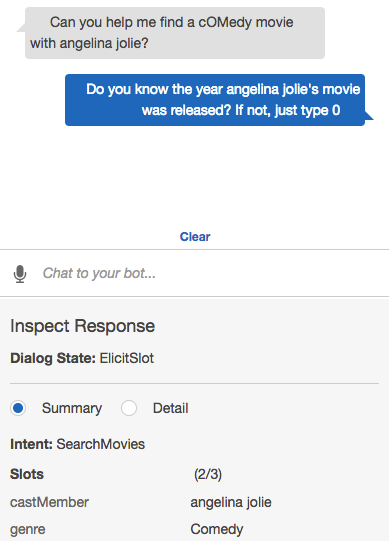 An important point to note here is that enumeration slot types (such as our MovieGenre type) are not case-sensitive. This means that both "comedy" and “coMeDy” will resolve to “Comedy”. This means we will be able to use a regular index on the Genres property of our movies collection (as long as our enumeration values in Lex match the Genres case in our database).

However, the AMAZON.Actor type is case sensitive - for instance, "angelina jolie" and “Angelina Jolie” are 2 distinct values for Lex. This means that we must define a case-insensitive index on the Cast property (don’t worry, there is already such an index, called ‘Cast_1’ in our sample movie database). Note that in order for queries to use that case-insensitive index, we’ll have to make sure our find() query specifies the same collation as the one used to create the index (locale=’en’ and strength=1). But don’t worry for now: I’ll make sure to point it out again in Part 3 when we review the code of our chat’s business logic (in the Lambda function we’ll deploy).

In this blog post, we created the SearchMovies Lex bot and tested its flow. More specifically, we:

We also identified the case sensitivity of a built-in Lex slot that adds a new index requirement on our database.

In Part 3, we’ll get to the meat of this Lex blog post series and deploy the Lambda function that will allow us to complete our bots’ intended action (called ‘fulfillment’ in the Lex terminology).

Meanwhile, I suggest the following readings to further your knowledge of Lex and MongoDB:

The User Guide to AWS re:Invent

This post is a mini-guide that walks through some of the things to do while you are at AWS re:Invent this year.