The frequency and severity of data breaches continues to escalate year on year:

Its no surprise that with databases storing an organization’s most important information assets, securing them is top of mind for the business.

In this 4-part blog series, we will present the best practices and controls available in MongoDB to help you create a secure, compliant database platform:

If you want to get a head-start and learn about all of these topics now, just go ahead and download the MongoDB Security Architecture guide.

In light of increasing threats over the past decade coupled with heightened concern for individual privacy, industries and governments around the world have embarked on a series of initiatives designed to increase security, reduce fraud and protect personally identifiable information (PII), including:

In addition to these initiatives, new regulations are being developed every year to cope with emerging threats and new demands for tighter controls governing data use.

Each set of regulations defines security and auditing requirements that are unique to a specific industry or application. Compliance is assessed on a per-project basis, evaluating people and processes alongside technology.

Despite the differences between each compliance standard, there are common foundational requirements across all of the directives, including:

These requirements inform the security architecture of MongoDB, with best practices for the implementation of a secure, compliant data management environment.

A holistic security architecture must cover:

The requirements for each of these elements are discussed below. 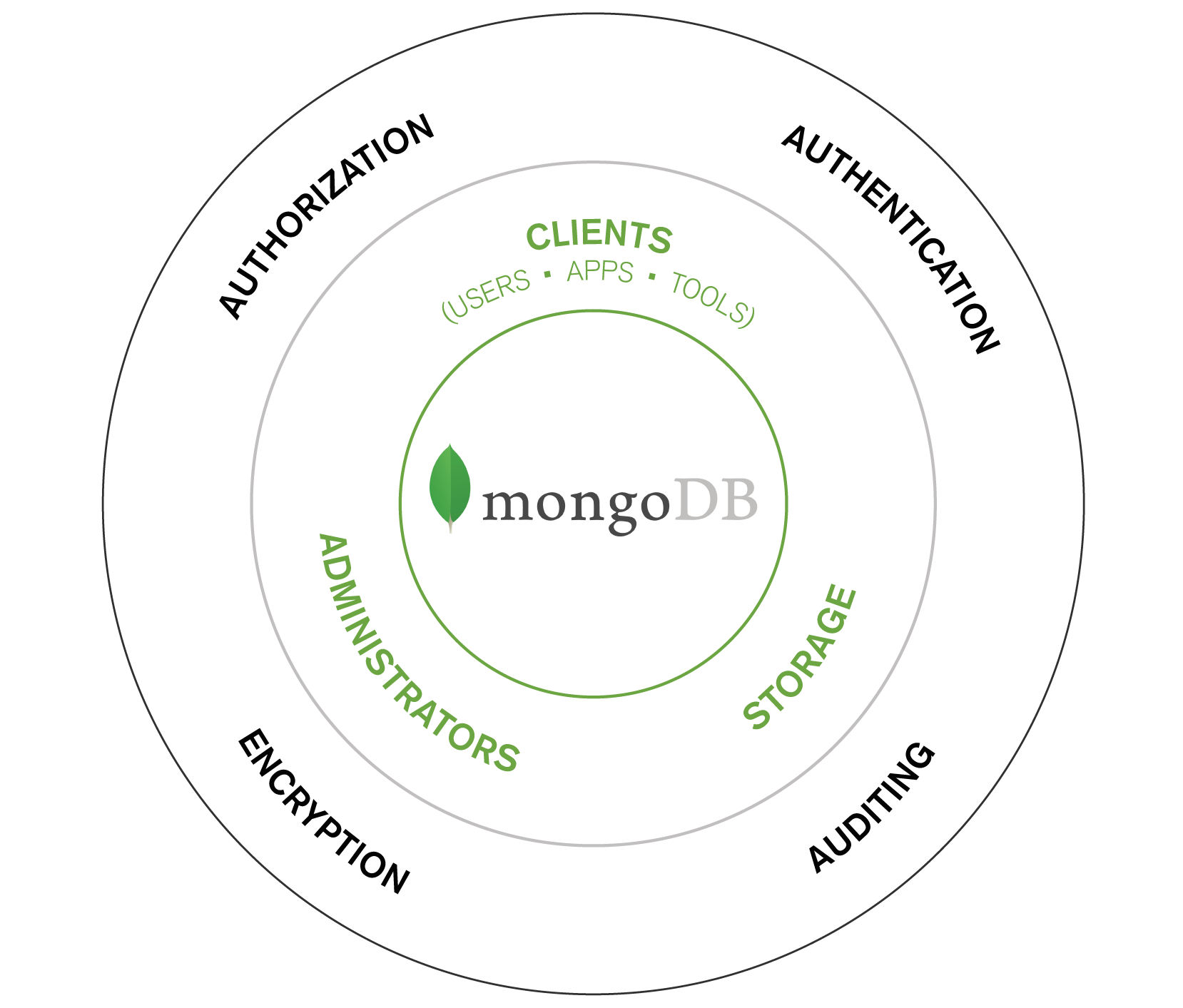 Authentication is designed to confirm the identity of entities accessing the database. In this context, entities are defined as:

Best practices for authentication are as follows.

By creating credentials it becomes easier to define, manage, and track system access for each user. Should a user’s credentials become compromised, this approach makes it easier to revoke the user without disrupting other users who need access to the database.

Developers, Administrators, and DBAs should all have unique credentials to access the database. When logins are shared it can be impossible to identify who attempted different operations, and it eliminates the ability to assign fine-grained permissions. With unique logins, staff that move off of the project or leave the organization can have their access revoked without affecting other user accounts.

Authentication should be enforced between nodes. This prevents unauthorized instances from joining a database cluster, preventing the illicit copying or movement of data to insecure nodes.

Once an entity has been authenticated, authorization governs what that entity is entitled to do in the database. Privileges are assigned to user roles that define a specific set of actions that can be performed against the database. Best practices include:

Care should be taken to ensure that only the minimal set of privileges is provided. Credentials of the most privileged accounts could compromise the entire database if they are hacked internally or by an external intruder.

By creating audit trails, changes to database configuration and data can be captured for each entity accessing the database, providing a log for compliance and forensic analysis. Auditing can also detect attempts to access unauthorized data.

Encryption is the encoding of critical data whenever it is in transit or at rest, enabling only authorized entities to read it. Data will be protected in the event that eavesdroppers or hackers gain access to the server, network or database.

The environment in which the database and underlying infrastructure is running should be protected with both physical and logical controls. These are enforced in the underlying deployment environment, rather than in the database itself, and include:

As manual configuration errors are one of the largest causes of attackers bypassing security mechanisms, there are a series of operational processes that should be adopted to further promote and enforce secure operation, including:

Getting Started with MongoDB Security

You can learn about all of these capabilities now by downloading the MongoDB Security Architecture guide. If you want to try them for yourself, download MongoDB Enterprise, free of charge for evaluation and development.

Parse shutdown: How to seamlessly continue operations with AWS and MongoDB Cloud Manager

Editor's note: Existing hosted Parse users can migrate their back-end using Parse's Database Migration tool directly to MongoDB Atlas. See how in this tutorial . Parse was a bold offering in the burgeoning space of Backend-as-a-Service, and we’re sorry to see them wind down. MongoDB was founded to make it easy for application developers to build great products for their users, so we are 100% behind projects that serve that mission on another level; and we are proud that Parse built their backend service on top of MongoDB. Fortunately, Parse has provided their users with a viable and straightforward migration path. Along with their announcement, they released Parse Server, an open source replacement for their hosted backend. To use this solution, a team needs to provision a private MongoDB database, migrate their Parse data to their MongoDB instance, deploy the Parse Server into a hosting environment of their choosing, and update their client to issue API calls to their new Parse Server. MongoDB Cloud Manager’s tight integration with AWS and Azure makes it easy to set up a MongoDB deployment, and AWS’s Elastic Beanstalk makes deploying Parse Server relatively easy. Together with the data migration tool that Parse is providing, the transition can be as seamless and painless as possible. To that end, we have put together a comprehensive guide to migrating a Parse backend to AWS with Cloud Manager and Elastic Beanstalk. A guide to doing the same with Azure is in development and will be posted soon. Using either solution will maximize the portability and stability of your new infrastructure. The guides are aimed at mobile developers without assuming any prior experience with MongoDB, Node.js, or AWS. They provide watertight, high-level checklists, with guidance for what effort you can expect to expend at each stage, as well as detailed, step-by-step directions for each. In addition, they are great jumping-off points to the specific MongoDB documentation relevant to those migrating from Parse, such as how to manage indexes and set up monitoring. Migrate from Parse to MongoDB and AWS Learn more. Join us for a live presentation on the steps required to migrate from the Parse platform to your own deployment of MongoDB on Amazon Web Services.