Queryable Encryption is a feature of MongoDB that enables a client application to encrypt data before transporting it over the network using fully randomized encryption, while maintaining queryability. Sensitive data is transparently encrypted and decrypted by the client and only communicated to and from the server in encrypted form. The security guarantees for sensitive fields containing both low cardinality (low-frequency) data and high cardinality data are identical

Unlike Client-Side Field Level Encryption that can use Deterministic Encryption, Queryable Encryption uses fast, searchable encryption schemes based on Structured Encryption that always encrypts a given cleartext input value to a different encrypted output value.

The diagram below shows the process and architecture of how Queryable Encryption is used in a customer environment.

In this diagram, the user is able to query on fully randomly encrypted data such as SSN number.

The process and mechanisms that makes this possible within the Queryable Encryption framework are as follows:

Queryable Encryption functions with the help of the following data structures. It is critical that these are not modified or deleted, or query results will be incorrect.

Do not modify these data structures or query results will be incorrect and security could be impacted.

While all clients have access to the non-sensitive data fields, only appropriately-configured Queryable Encryption clients are able to run read and write queries using the encrypted data fields.

When you use Queryable Encryption in production, you must use a remote Key Management System (KMS) to store your encryption key.

To view a step-by-step guide demonstrating how to use a remote KMS with Queryable Encryption, see Tutorials.

To view a list of all supported KMS providers, see KMS Providers.

To learn more about why you should use a remote KMS, see Reasons to Use a Remote KMS.

This section describes the following security mechanisms supported by MongoDB and explains their use cases and limitations:

Role-Based Access Control is a security mechanism that allows administrators to grant and restrict collection-level permissions for users. With the appropriate role definition and assignment, this solution prevents accidental disclosure of data and access.

Encryption at Rest is a mechanism that encrypts database files on disk. This mechanism prevents a person who lacks database credentials, but has access to the computer hosting your database, from viewing your data.

This mechanism does not protect your data against the following scenarios:

Transport Encryption using TLS/SSL encrypts your data over the network. TLS/SSL protects your data as it travels over an insecure network, but cannot protect your data from a privileged user or as it sits on disk.

The following diagram describes security features MongoDB supports and the potential security vulnerabilities that they address: 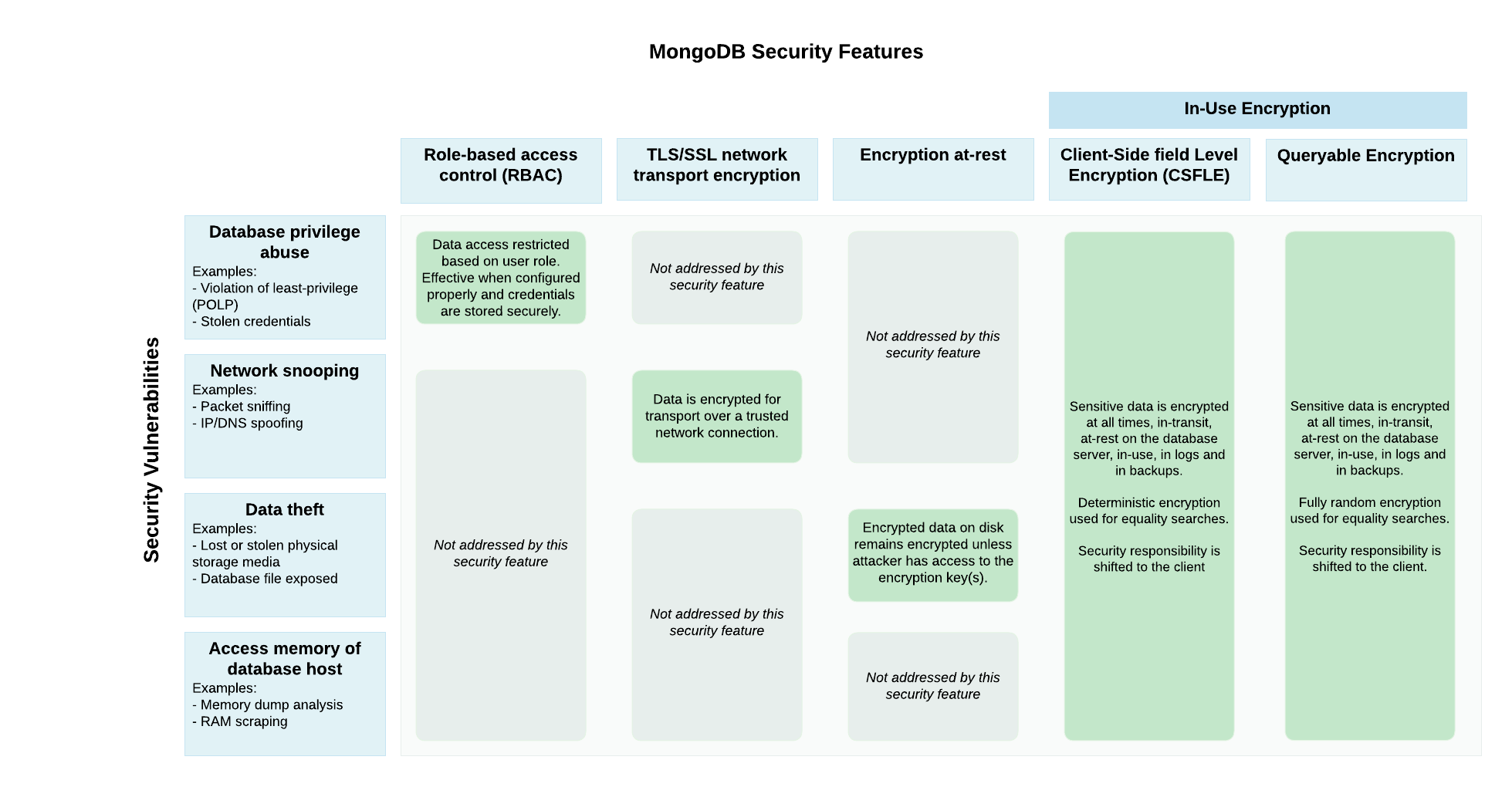 In this scenario, we secure sensitive data on a medical care management system that stores patients' personal information, billing information, and medical records for a fictional company, MedcoMD. None of the patient data is public, and specific data such as their social security number (SSN, a US government-issued ID number), patient ID number, billing information, and medication information are particularly sensitive and subject to privacy compliance. It is important for the company and the patient that the data is kept private and secure.

MedcoMD needs this system to satisfy the following use cases:

MedcoMD is also concerned with the disclosure of sensitive data through any of the following methods:

What can MedcoMD do to balance the functionality and access restrictions of their medical care management system?

MedcoMD uses the following security mechanisms to satisfy their use cases and protect against the disclosure of sensitive medical data:

To view a list of security measures you should implement to protect your MongoDB deployment, see the Security Checklist.