In this guide, you can learn how to store and retrieve large files in MongoDB using the GridFS specification. GridFS splits large files into chunks and stores each chunk as a separate document. When you query GridFS for a file, the driver will reassemble the chunks as needed. The driver implementation of GridFS is an abstraction that manages the operations and organization of the file storage.

Use GridFS if the size of your files exceeds the BSON document size limit of 16 MB. GridFS is also useful for accessing files without loading the entire file into memory. For more detailed information on whether GridFS is suitable for your use case, see the GridFS server manual page.

GridFS organizes files in a bucket, a group of MongoDB collections that contain the chunks of files and information describing them. The bucket contains the following collections:

The driver also creates an index on each collection to ensure efficient retrieval of the files and related metadata. The driver creates indexes if they do not already exist and when the bucket is empty. For more information on GridFS indexes, see the server manual page on GridFS Indexes. 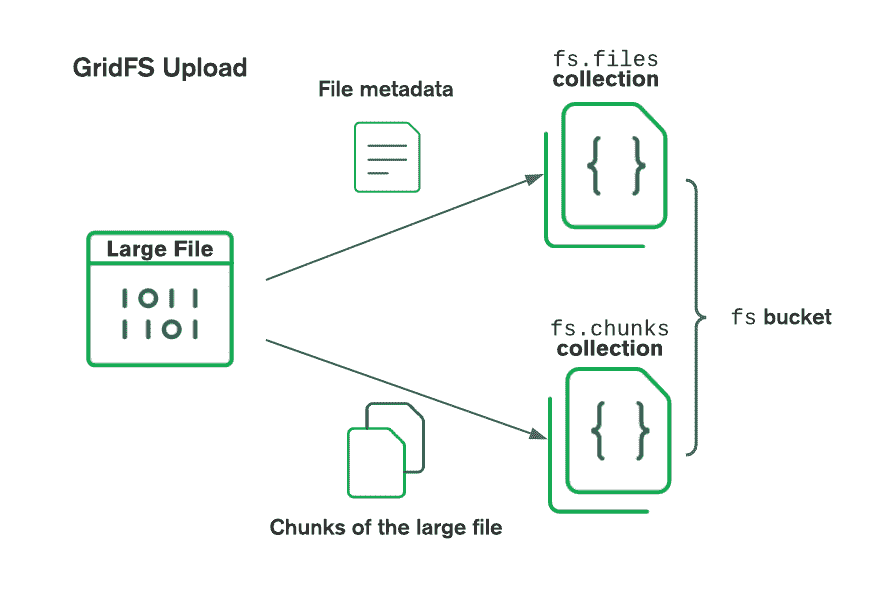 When retrieving files, GridFS fetches the metadata from the files collection in the specified bucket, then uses that information to reconstruct the file from documents in the chunks collection. You can read the file into memory or output it to a stream.

To learn about GridFS operations and how to perform them, navigate to the following sections:

To store or retrieve files from GridFS, create a bucket or get a reference to an existing bucket on a MongoDB database. To create a GridFSBucket instance, call the NewBucket() method with a database parameter:

If a GridFS bucket already exists, the NewBucket() method returns a reference to the bucket rather than instantiating a new one.

By default, the new bucket is named fs. To instantiate a bucket with a custom name, call the SetName() method on a BucketOptions instance as follows:

You can upload a file into a GridFS bucket in one of the following ways:

For either upload process, you can specify configuration information on an instance of UploadOptions. For a full list of UploadOptions fields, visit the API documentation.

Upload with an Input Stream

To upload a file with an input stream, use the UploadFromStream() method with the following parameters:

The following code example reads from a file called file.txt and uploads the content to a GridFS bucket. It uses an opts parameter to set file metadata:

The driver uniquely generates each object ID number. The ID number outputted will resemble the sample output but varies with each file and user.

Upload with an Output Stream

To upload a file with an output stream, use the OpenUploadStream() method with the following parameters:

The following code example opens an upload stream on a GridFS bucket and sets the number of bytes in each chunk with an opts parameter. Then, it calls the Write() method on the content of file.txt to write its content to the stream:

To retrieve file data, call the Find() method on a GridFSBucket instance. You can pass a query filter as an argument to Find() to match only certain file documents.

The Find() method requires a query filter as a parameter. To match all documents in the files collection, pass an empty query filter to Find().

The following example retrieves the file name and length of documents in the files collection with length values greater than 1500:

You can download a GridFS file in one of the following ways:

The following example downloads a file and writes to a file buffer:

The following example downloads a file into memory and reads its contents:

You can update the name of a GridFS file in your bucket by using the Rename() method. Pass a file ID value and a new filename value as arguments to Rename().

The following example renames a file to "mongodbTutorial.zip":

You can remove a file from your GridFS bucket by using the Delete() method. Pass a file ID value as an argument to Delete().

The following example deletes a file:

You can delete a GridFS bucket by using the Drop() method.

To learn more about GridFS and its operations, visit the GridFS manual page.

To learn more about the methods or types discussed in this guide, see the following API Documentation: