MACD (Moving Average Convergence Divergence) is another trading indicator and provides visibility of the trend and momentum of the currency/stock. MACD calculation fundamentally leverages multiple EMA calculations with different parameters.

We can use the MongoDB Aggregation Framework to calculate this complex indicator.

In the previous blog posts, we learned how we can group the second-level raw data into five-minutes intervals through the $group stage and $dateTrunc operator:

After that, we need to calculate two exponential moving averages with different parameters:

After we calculate two separate exponential moving averages, we need to apply the $subtract operation in the next stage of the aggregation pipeline:

After we’ve obtained the macdLine field, then we can apply another exponential moving average to this newly generated field (macdLine) to obtain MACD signal value:

Therefore, we will have two more fields: macdLine and macdSignal. We can generate another field as macdHistogram that is calculated by subtracting the macdSignal from macdLine value:

Now we have three derived fields: macdLine, macdSignal, and macdHistogram. Below, you can see how MACD is visualized together with Candlesticks: 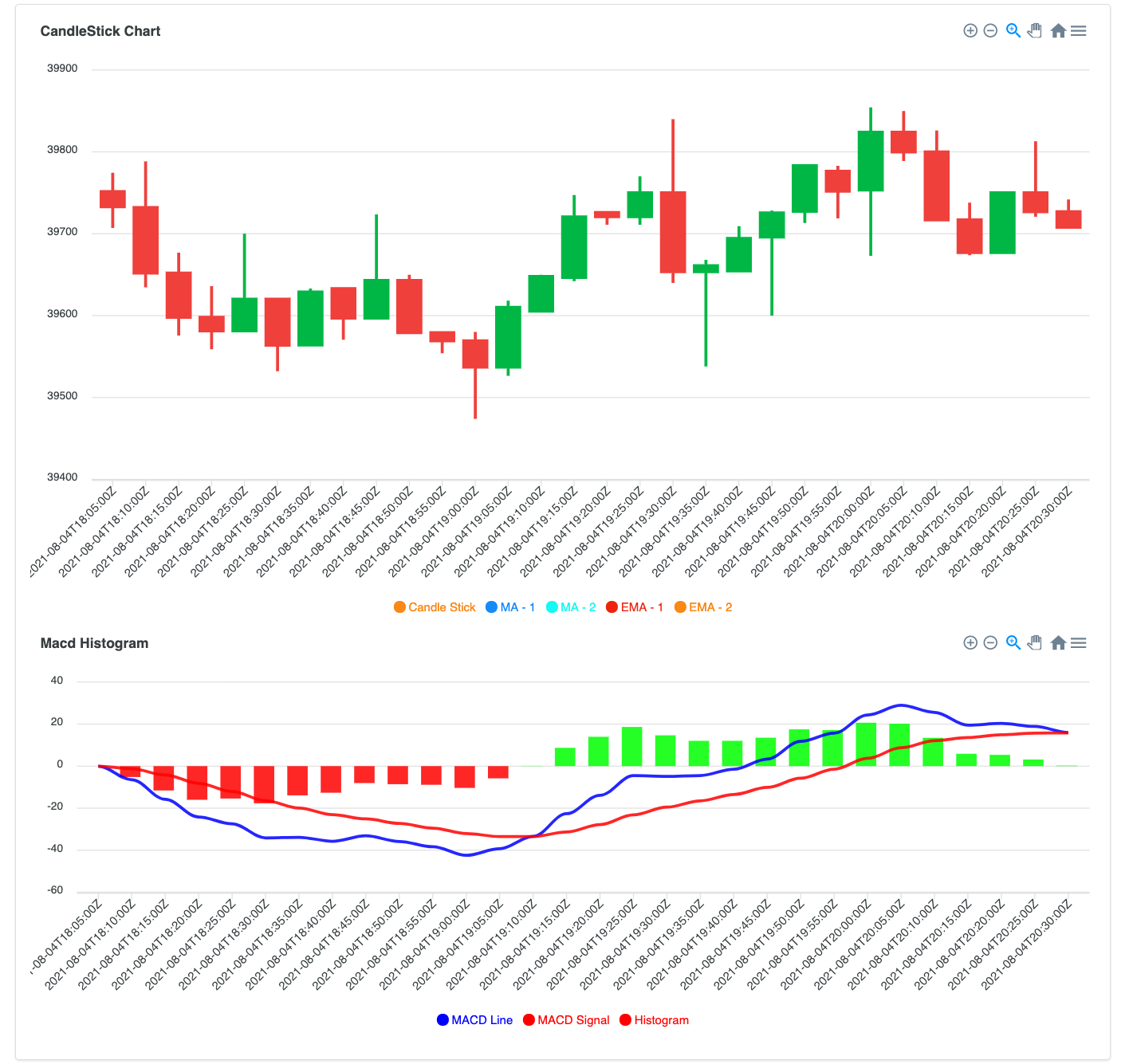 This is the complete aggregation pipeline:

Calculation of RSI is a bit more complicated than MACD:

Firstly, we need to define the gain and the loss value for each interval.

Once we calculate the Gain and Loss, we will have the following data:

We set our window with partitioning and introduce new field as previousPrice:

After we set the $previousPrice information for the current document, then we need to subtract the previous value from current value. We will have another derived field “diff” that represents the difference value between current value and previous value:

We’ve set the diff value and now we will set two more fields, gain and loss, to use in the further stages. We just apply the gain/loss logic here:

After we have enriched the symbol data with gain and loss information for every document, then we can apply further partitioning to get the moving average of gain and loss fields by considering the previous 14 data points:

Here we also used another newly introduced operator, $documentNumber. While we do calculations over the window, we give a sequential number for each document, because we will filter out the documents that have the document number less than or equal to 14. (RSI is calculated after at least 14 data points have been arrived.) We will do filtering out in the later stages. Here, we only set the number of the document.

After we calculate the average gain and average loss for every symbol, then we will find the relative strength value. That is calculated by dividing average gain value by average loss value. Since we apply the divide operation, then we need to anticipate the “divide by 0” problem as well:

Relative strength value has been calculated and now it’s time to smooth the Relative Strength value to normalize the data between 0 and 100:

We basically set null to the first 14 documents. And for the others, RSI value has been set.

Below, you can see a one-minute interval candlestick chart and RSI chart. After 14 data points, RSI starts to be calculated. For every interval, we calculated the RSI through aggregation queries by processing the previous data of that symbol: 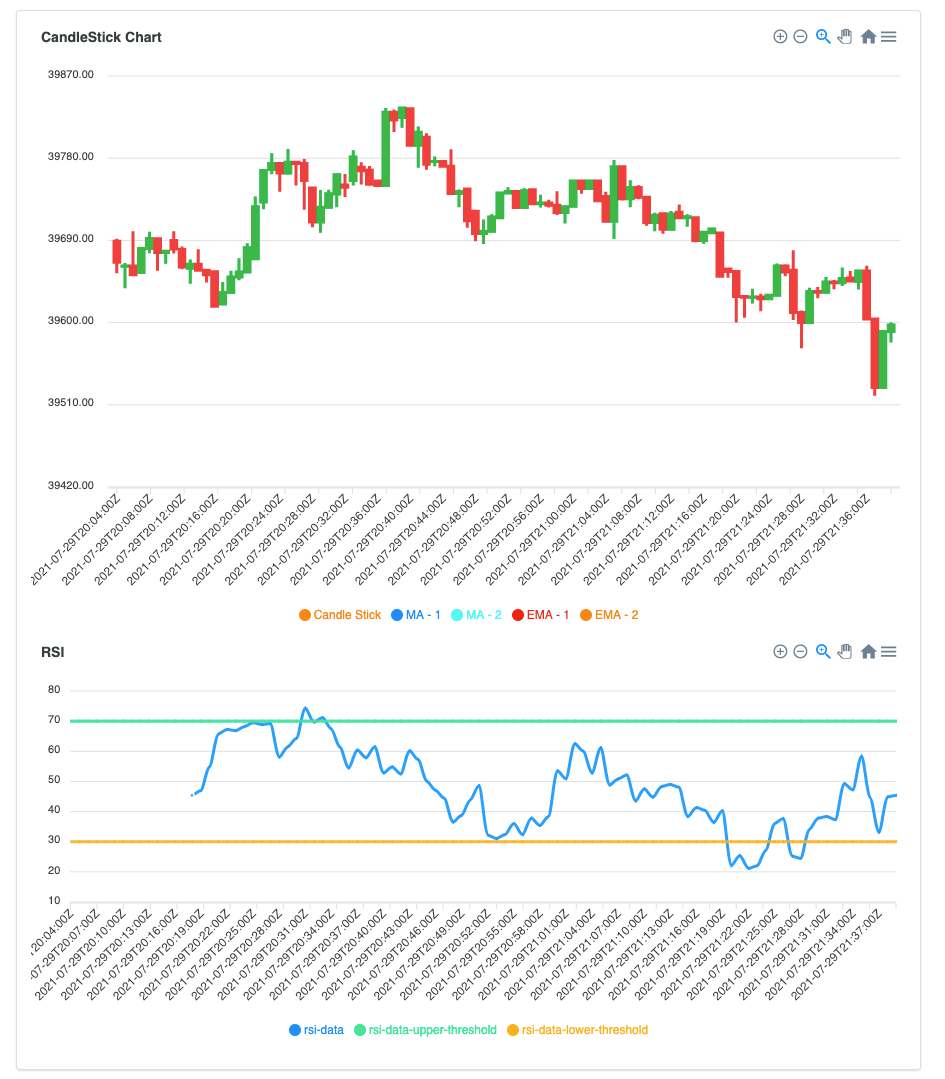 This is the complete aggregation pipeline:

MongoDB Aggregation Framework provides a great toolset to transform any shape of data into a desired format. As you see in the examples, we use a wide variety of aggregation pipeline stages and operators. As we discussed in the previous blog posts, time-series collections and window functions are great tools to process time-based data over a window.

In this post we've looked at the $shift and $documentNumber operators that have been introduced with MongoDB 5.0. The $shift operator includes another document in the same window into the current document to process positional data together with current data. In an RSI technical indicator calculation, it is commonly used to compare the current data point with the previous data points, and $shift makes it easier to refer to positional documents in a window. For example, price difference between current data point and previous data point.

Another newly introduced operator is $documentNumber. $documentNumber gives a sequential number for the sorted documents to be processed later in subsequent aggregation stages. In an RSI calculation, we need to skip calculating RSI value for the first 14 periods of data and $documentNumber helps us to identify and filter out these documents at later stages in the aggregation pipeline.