Instead, Atlas provides a flexible, affordable application data platform with zero maintenance requirements. It also offers monitoring, alerts and analytics via an intuitive dashboard as well as visualizations via Charts. Now, one million active users enjoy performance speeds five times faster than before, while Paylocity pays five times less for the service than the incumbent vendor. This helps the company maintain 60 percent user growth year on year.

Founded in 1997 and headquartered in Schaumburg, Illinois, Paylocity is a leading provider of payroll and human capital management (HCM) software solutions. Its comprehensive product suite delivers a unified platform for professionals to make strategic decisions in the areas of benefits, core HR, payroll, talent and workforce management, while cultivating a modern workplace and improving employee engagement. Paylocity has consistently been recognized nationally for its innovation, culture and growth.

Part of the company’s product portfolio is its Community platform – an integrated, mobile-friendly social collaboration tool designed to centralize accurate and timely company information while giving employees the peer collaboration and connection they need to be more engaged, aware, and productive. As Paylocity customers adopted Community at rates beyond expectations in response to increased remote working and employee communication and engagement needs, users and data volumes grew exponentially; however, the previous database solution was rigid and expensive. 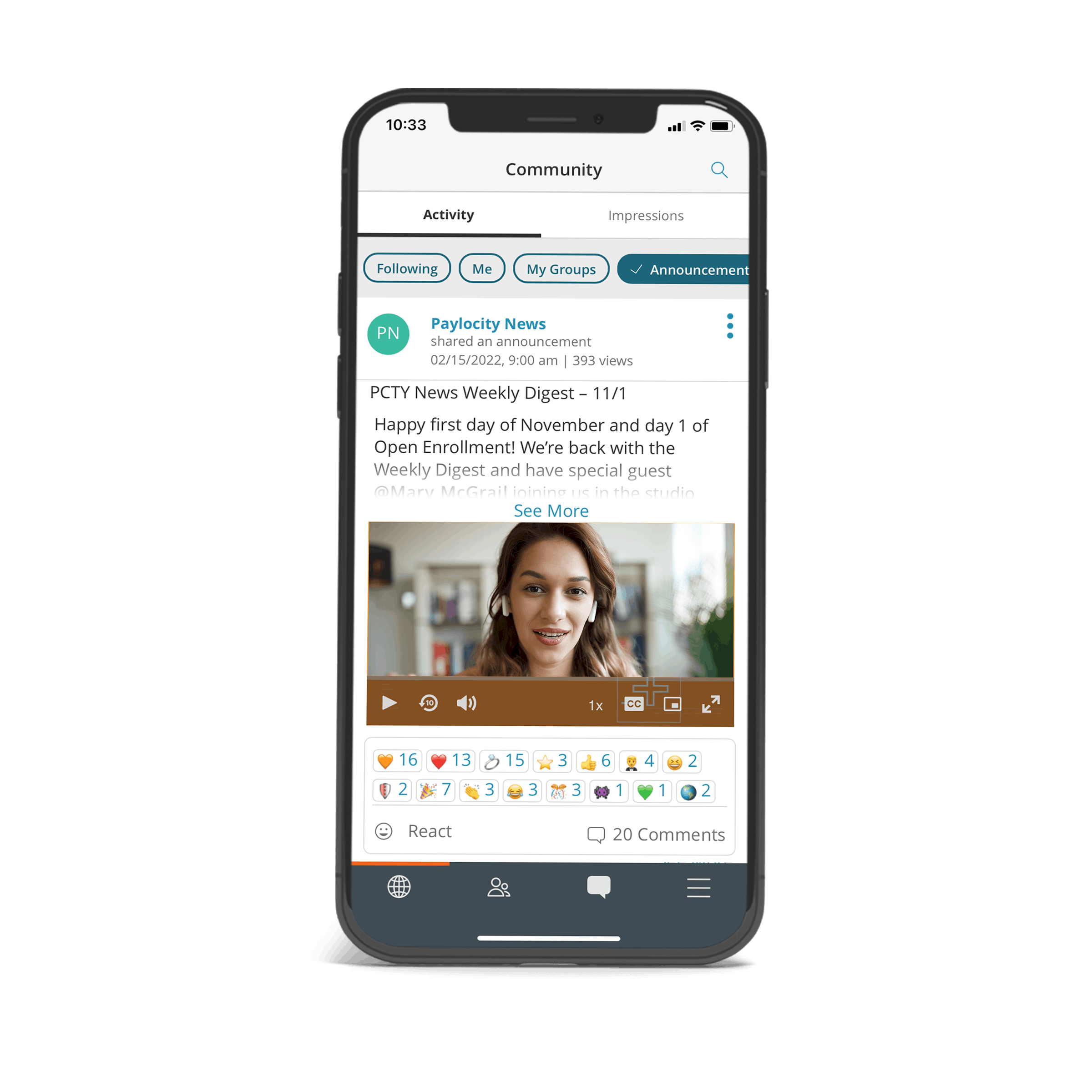 An example of open enrollment notifications on Paylocity’s Community platform

“We have a growing set of interactive posts, attachments and comments but couldn’t scale when we needed to without incurring significant costs,” explains John Wiegert, Principal Engineer, Paylocity. “At the same time, we were faced with numerous performance concerns and suffered from slow queries and interactions, while having to handle a lot of onerous maintenance.”
THE SOLUTION

To maintain momentum and to continue providing the caliber of service clients had come to expect, Paylocity needed a cost effective, scalable, and high-performing document database with minimal maintenance requirements. Since the initial launch of Community on the incumbent vendor, MongoDB has introduced Atlas, its cloud-based document database solution. As Paylocity had already been using a MongoDB API in its original set-up, Atlas seemed like a perfect fit.

“We had kept an eye on the market and knew Atlas was enterprise-ready with a zero-maintenance, fully managed, low-cost, high-performance solution,” adds Wiegert. “It also offers monitoring, alerts and analytics via its dashboard, so it ticked all the boxes.”

Paylocity and MongoDB started with a proof-of-concept exercise and then began building a five-node MongoDB Atlas database on AWS. As the company had been using a MongoDB API in the original platform, it was simple to migrate much of the existing code; the team also built a feature flag system to automatically switch data between the existing and Atlas databases. This meant that, after four months of preparation, Paylocity was ready to have a big bang switchover.

“It took a couple of hours to export the data from the old platform, during which time users could only read content; however, it only took ten minutes to import it all into Atlas, which gives an indication of its performance and efficiency,” continues Wiegert. “Honestly, the migration was so smooth, it was scary. We had set up a shared channel with the MongoDB engineers so they could support us in real time, which made our lives easier.”

Five times faster at a fifth of the cost

Today, millions of active users are accessing Community, interacting with each other, building corporate culture and staying up-to-date in a much more responsive and reliable environment. Benchmarking shows that MongoDB Atlas is a groundbreaking five times faster than its predecessor, while costing just a fifth of the amount – equivalent to $100k savings each year. Moreover, Atlas offers visibility of queries and alerts so Paylocity can optimize performance further. In total, there are over 30 different dashboard fields, providing unprecedented insight and analysis.

Paylocity, a leading human capital management (HCM) provider, has consistently been recognized nationally for its innovation, culture, and growth

“We have the tools to speed up queries and see what is going on. We can also collect data long term and build up a detailed picture of where we are and where we are going so we can forecast more effectively and accurately,” says Wiegert. “With growth predictions of 60 percent, Atlas gives us peace of mind that we can scale comfortably and affordably.”

Paylocity has also been impressed by the level of service from MongoDB, both during the migration and in production: “The team is super-responsive and knowledgeable, and we developed a true partnership, which you rarely get with vendors. MongoDB was invested in our success,” comments Wiegert.

In addition, Atlas is fully managed on AWS so Paylocity does not need to focus time on supporting the platform, meaning it can concentrate on more strategic tasks. This makes it a much more attractive proposition for ambitious new recruits.

“We can’t afford to get bogged down in operations and updates and replications. We are software experts and Atlas allows us to focus on that,” remarks Wiegert. “And Atlas has practically zero performance issues, so it really does just get on with the job in hand without slowing us down.”

With MongoDB Atlas in place, Paylocity is well placed to continue growing its Community platform, helping its customers to connect with their employees from wherever they are, confident that the developer data platform can scale effortlessly to meet demand.

“Loading the feed used to take seconds, now it is near instantaneous. Popular posts which would start chugging if too many people responded now have consistent performance,” concludes Wiegert. “We are better able to serve our customers thanks to MongoDB.”

“Atlas is enterprise-ready with a zero-maintenance, fully managed, cost effective, high-performance solution. It also offers monitoring, alerts and analytics via its dashboard, so it ticked all the boxes.”