India is home to more than 60 million small and medium-sized businesses (SMBs), and it's estimated those businesses contribute 30 percent of GDP to the economy. However, only a small portion of those SMBs are taking advantage of digitization and many still operate using pen and paper.

FloBiz is an Indian startup on a mission to change that. The three co-founders, Rahul Raj, Rakesh Yadav and Aditya Naik saw an opportunity to support the small business economy by developing a deep understanding and empathy for their needs, which inspired the founders to invest in building a neobank to support growth and prosperity for small business owners across India.

The startup’s flagship offering —myBillBook — helps SMBs digitize their invoicing, streamline business accounting and automate workflows of their enterprises. myBillBook has now been downloaded over six million times and is available in a simple to use mobile app as well as offline desktop software format. It is a one stop solution which helps SMBs create professional invoices (GST & non-GST), manage stock, collect payments & automate reminders through smart banking and generate more than 20 business reports like GSTR, stock & sale summary etc.

FloBiz, first established in December 2019, now employs 170 people and also works with offline distributors in 70 cities across India. Faith in this mission helped FloBiz to raise $31 million in September 2021 in a new financing round.

In the coming months FloBiz intends to make the product available in six more languages (in addition to its current offering in four languages) and also foray into neobanking space with integrated banking, payments, insurance and other line of credit financial services.

The founders conducted extensive research across small to medium enterprises meeting with more than 1000 business owners to understand their pains and opportunities.

They discovered that despite a desire from SMBs to digitise there was no platform that catered for these smaller businesses' preferences for an easy-to-use mobile first-type solution. As a result, only around 20 percent of SMBs had embraced digitisation. Their research also revealed four key technical challenges that explained why.

Firstly, connectivity. According to co-founder and CTO Rakesh Yadav, while India has the world’s second largest internet penetration, many businesses struggled with fluctuations in internet services, outages and latency which made it imperative to develop tools that could manage billing and inventory in both online and offline environments. It was also vital they could sync seamlessly in the background to ensure the accuracy of data when they came back online. This gets particularly complex when multiple people from a company may be all using the app simultaneously while going online and offline. If there is not a sophisticated process for syncing and resolving conflicts (e.g. two invoices submitted with the same invoice number or edits made to the same section of a document) then there's a high chance that a customer's data or work could get lost.

The second challenge was data security. “When customers approached us to learn more about myBillBook, one of their critical questions is always wanting to know how secure the data is. They needed their data to be available 100 percent of the time online and offline, and with certainty that there was no chance their data might leak out to third parties or be compromised in any way,” Rakesh explained.

“When customers approached us to learn more about myBillBook, one of their critical questions is always wanting to know how secure the data is.”

FloBiz’s Director of Engineering Ratikesh M. explained data complexity was the third big challenge for working out how to cater for a diverse customer ecosystem. “Even when you think about creating a simple invoice, there are hundreds of potential fields of data associated with this. Everything from offering discounts, variations on products, different formats and all the individual products all add to the sheer complexity of data,” Ratikesh said. The team also didn't have visibility into exactly how the app would be used and why data types would need to be incorporated as it developed.

With customers working across multiple devices and in a combination of online and offline environments, for myBillBook the fourth and final key challenge was the need to be truly multi-platform. An app that was native to mobile, but could also work on the web as well as a plurality of different devices.

Many challenges, one unified solution – a developer data platform (Atlas)

The FloBiz team started building a simple MVP (minimal viable product) to get something usable in the hands of customers as part of their research period. This was built using relational database PostgresSQL and a simple three tier architecture.

While the product features were an instant hit with customers, it also quickly became clear the MVP's underlying database architecture would not scale nor would it solve the major challenges facing myBillBook. The relational database was too inflexible to easily make changes and add features. Meanwhile the team was also looking at having to write their own data syncing software, which would take around six months and, even then, may not solve all the issues, explained FloBiz Software Development Engineer Sarthak Garg.

After looking briefly at Couchbase as well as possible mixes of other technologies such as Firebase, Redis and SQLite, the team concluded they did not want to spend time managing and maintaining multiple systems. They needed a true modern developer data platform (Atlas). Something that brought together a fully managed cloud database, with a flexible underlying data model, and integrated mature mobile data.

They found what they were looking for with MongoDB Atlas, the managed cloud database service, running on Google Cloud.

According to Ratikesh, FloBiz selected Google Cloud as their cloud service provider having received exceptional support. “One of the core reasons for using Google Cloud was the advanced big data tech stack they provide which can help us in scaling our business,” he said.

MongoDB gave the development team the incredible flexibility they needed to manage the complex data challenges they faced. The document model allowed them to make changes and add new integrations quickly and easily. Atlas also has best-in-class security, management tooling and monitoring built in, so developers didn't have to spend time managing and securing the data layer.

Crucially, in 2019, MongoDB had also just acquired Realm which was the addition the team needed to address the mobile functionality and connectivity challenges they faced. Realm is the popular modern mobile database with built-in edge-to-cloud sync that empowers developers to build great offline-first apps anywhere.

“Early on, we ran into problems with syncing as we didn’t have a single database that was flexible enough to work across our entire platform. myBillBook isn’t just one app, rather individual apps for web, desktop and mobile, further adding to the complexity of data management,” Sarthak explained.

“Early on, we ran into problems with syncing as we didn’t have a single database that was flexible enough to work across our entire platform.”

“These individual applications may be used by multiple people within the business at the same time and they all need to be interconnected to the same source of data across the entire platform whether offline or online,” he said.

The Realm alongside MongoDB Atlas Device Sync allowed the myBillBook team to build a rich and fully featured mobile application. And just as importantly, Realm's native sync functionality meant it became effortless to sync data between the mobile device itself and the backend database. This meant even if multiple users were using the same account, going offline and online, there would be no issues, duplications or lost data.

Between Realm, Atlas and MongoDB the team's features and challenges were solved. However, the biggest advantage came from all of the services coming together in one unified data layer – the developer data platform (Atlas). With a single interface, developer language and set of APIs the team could build and maintain the entire myBillBook offering. The platform even included native data visualisation with MongoDB Charts, which the team uses to visualise the deployment and monitoring data.

"Having all that functionality in a single unified database was incredibly important for us. It really saved us from dealing with the complexity of managing all those different systems and we had a single source of truth. This has made us way more productive. We've sped up our development time and it will give us huge opportunities as we start to do more with our data," explained Ratikesh.

"Having all that functionality in a single unified database was incredibly important for us. It really saved us from dealing with the complexity of managing all those different systems and we had a single source of truth. This has made us way more productive." 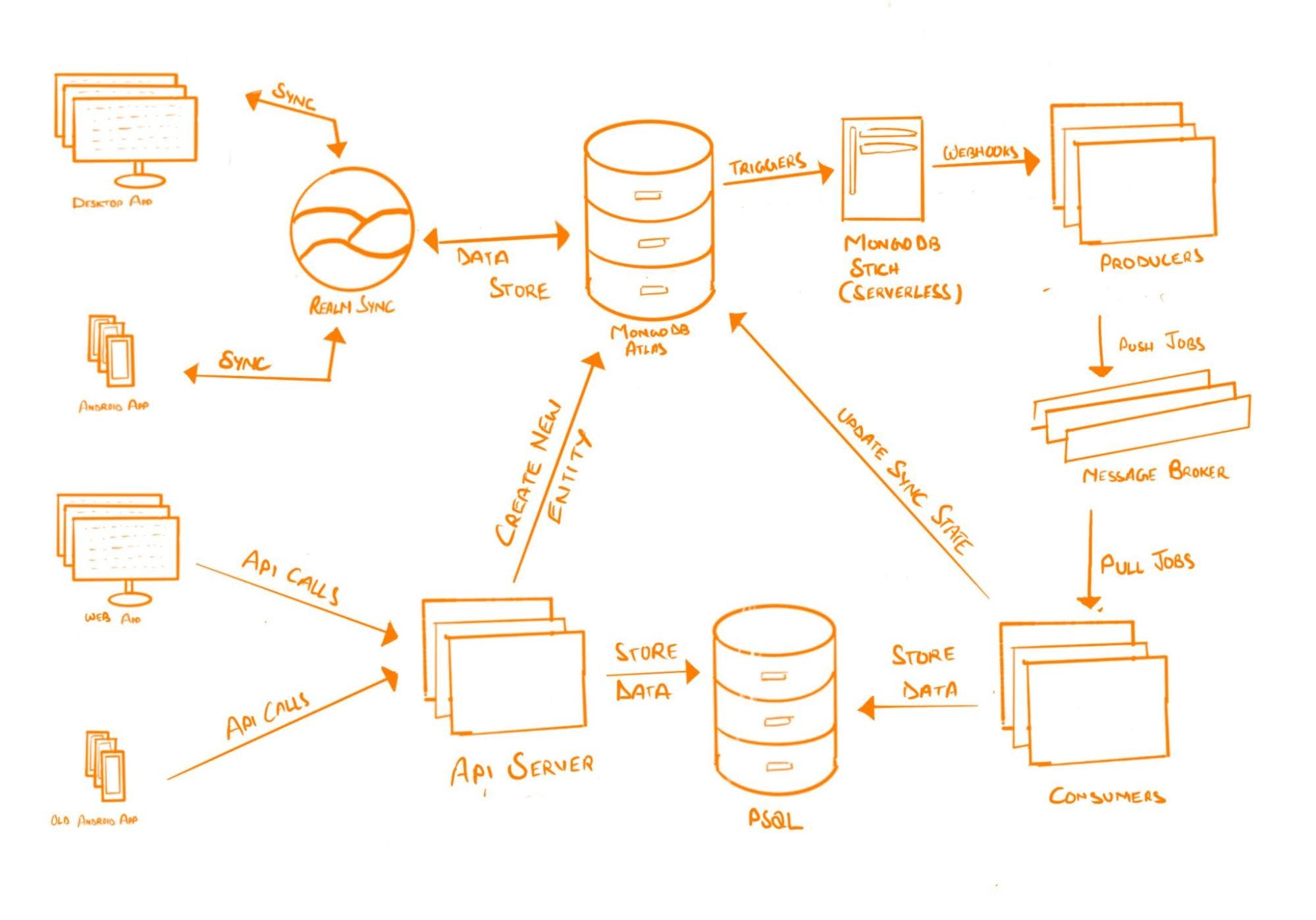 myBillBook is emerging as one of India’s leading digital accounting and small business management tools. However, the ultimate metric for the FloBiz is simple - how many of India's great SMBs are digitising and growing their business with myBillbook. In just over two years, they've seen massive growth, with more than six million registrations and a million monthly users. But it's still very early in India's transformation and the team is confident this will grow 5x in the next 18 to 24 months. This incredible growth is being supported and enabled by the technologists powering FloBiz and the platform they built it on.

One of myBillBook's thousands of customers

The move to MongoDB's fully managed database on the cloud has reduced transaction speeds on updates by 90 percent. MongoDB has also alleviated performance issues created by huge spikes in traffic across the system. Moving workloads away from PostgresSQL helped reduce the drain on CPU by 50 per cent. For their customers this plays out as faster syncing for quicker response times, more efficient mobile battery usage and — most importantly — uninterrupted business operations management anywhere and everywhere.

The platform approach is also improving the velocity that the development team can ship new features and updates. Developers are free up to focus on innovation and scaling priorities for the year ahead, such as building personalisable modules and features into myBillBook, diversifying FloBiz’s core product offerings and preparing to roll out financial services.

According to Rakesh, 2022 is set to be another massive year of growth. “We have a slew of developments in the pipeline to further delight our SMB customers in the next 12 months. And as we continue to add new features and functionality to myBillBook along with expanding our financial services offering, MongoDB's platform will be the single source of truth for every data point helping us deliver a wave of positive transformation for India's small and medium sized businesses,” Rakesh said.