When Meltwater was founded in 2001 in Norway it was among the first companies to offer a tool for online media monitoring. Today, they are one of the leaders in this growing sector and are able to use data-driven product insight to help prioritize features their customers want.

Meltwater has experienced rapid growth over the last five years with eight different acquisitions in the AI & data science spaces as it continues to innovate its offering. The company now serves 30,000 customers in over 120 countries and has over 2,000 employees including several hundred developers on the Engineering teams.

“As our product matured and the market matured we undertook initiatives to become a DevOps company and move things into the cloud—MongoDB Atlas helped us make that transition."

While novel at the time, the competitive landscape for media listening platforms has drastically shifted. As the market grew and demand for Meltwater led to a mature product suite, the company has undergone a cloud-first transition relying on MongoDB and Amazon Web Services to break down its monolith infrastructure and transform into a microservices environment.

“As our product matured and the market matured we undertook initiatives to become a DevOps company and move things into the cloud—MongoDB Atlas helped us make that transition,” said Joan Freed, Senior Director of Engineering, Social at Meltwater.

Meltwater developers rely on MongoDB Atlas to quickly spin up new services and data stores with just a few clicks of a button to get up and running and writing production-ready code. This shift to a cloud-first infrastructure has allowed the Cosmos team—responsible for driving the information architecture overhaul of the Meltwater application—to tackle one of their larger goals, soliciting and incorporating more user feedback into the product life cycle. Over the years as more features by different teams had been built out, the app had become less cohesive.

“It just started feeling to our end users like a collection of tools that were difficult to understand how to make best use of,” Doug Leary, principal software engineer for Team Cosmos at Meltwater said. “This kicked off an initiative to have higher-level thinking around the architecture of the application and how we present information to new users. As you increase feature capabilities, you also increase the overhead that new users have to learn.”

User input is critical to product development. After incorporating a global search into its page and designing a new homepage specifically geared to onboard new users, Cosmos was in need of a visualization solution to assess product usage analytics from a user-interaction standpoint. 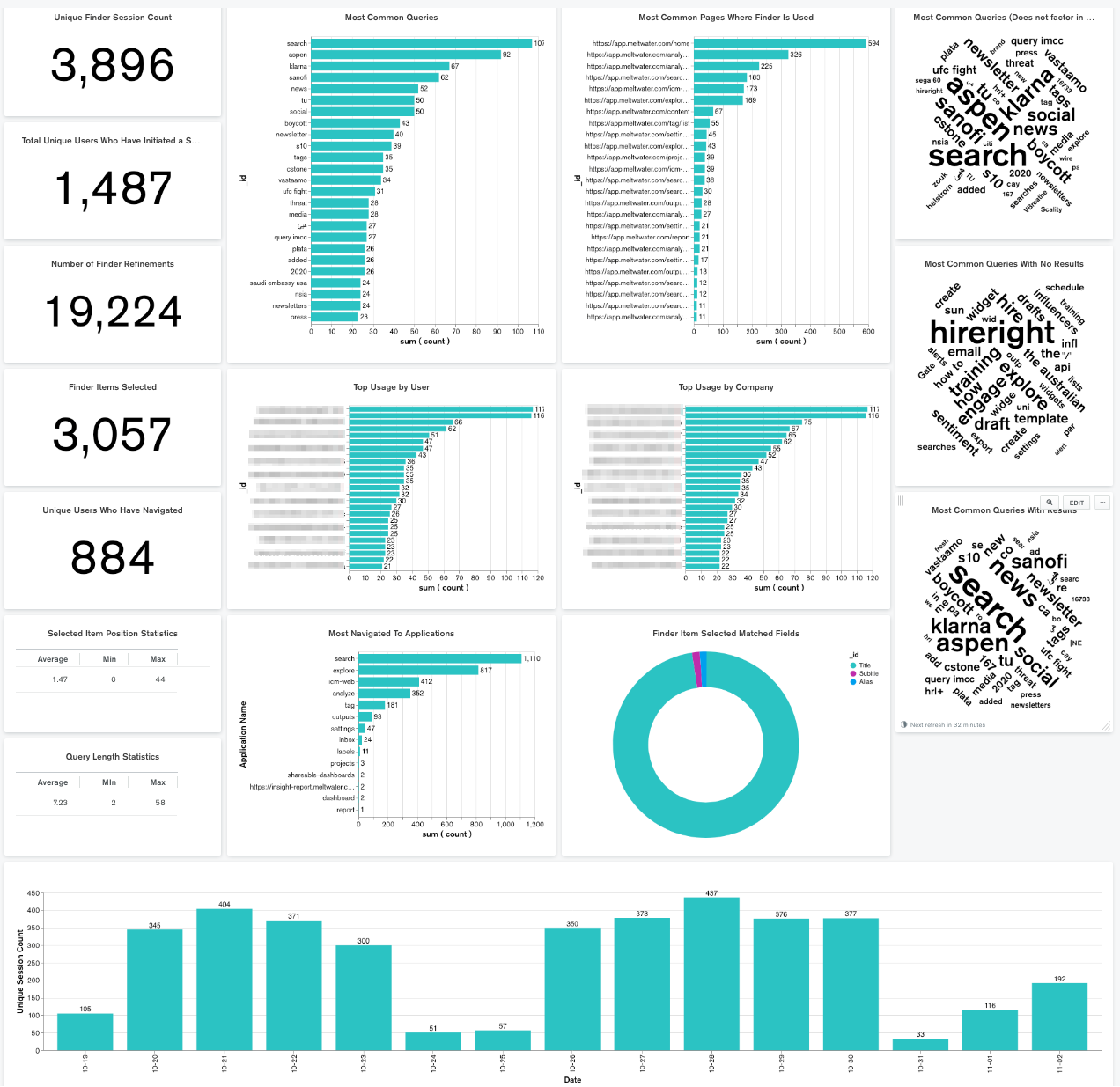 From its new homepage and additional testing, the Cosmos team turned to MongoDB Charts to map their user’s journey, better informing their architecture and feature design. Insights gleaned from this data helps developer teams maximize productivity building out new features and additional functionality while shaping a more cohesive user experience (UX). They’re empowered to make data-driven decisions with more granular design aspects as well. As Doug Sappet, Senior Software Engineer on the Cosmos Team, put it, “Charts helps us drive roadmap and feature decisions, but it also helps with micro-decisions too. Do we show top 5 or top 50 results in a dropdown? Things like that.”

“A challenge for our engineering teams, specifically the product owners, was having access to metrics rather than having to pull them from RedShift or request them from our BI or Analytics teams,” continued Leary. “What sold us on Charts was the entire charting library built in for us with the ability to run aggregation queries and make them as complex as we wanted to. Additionally, we were sold by the ability for our product owners to go in and just see the metrics whenever they want instead of us having to connect to [an external] database and run a query and then pipe the results to them in plain text.”

“The ability to dump the data in Atlas and have a full visualization library directly connected to the database without having to do anything was the reason we chose MongoDB Charts, and subsequently Atlas,” added Leary. MongoDB Charts is fully integrated with MongoDB Atlas, allowing Meltwater’s developers to quickly create data visualizations and share them without managing any software or infrastructure. No tools to configure, and no data movement or duplication.

“The ability to dump the data in Atlas and have a full visualization library directly connected to the database without having to do anything was the reason we chose MongoDB Charts, and subsequently Atlas”

Thanks to the move to a DevOps approach supported by MongoDB Atlas, Meltwater is releasing new features much faster. “We’ve gone from releases every six months to multiple releases per day,” added Freed. The DevOps adoption has been great for the company’s culture too. For example, the various development teams had the freedom to pick their own fun names such as Cosmos, Carlitos Way, and Pirates.

The new culture isn’t just more fun and agile, but it’s more data-driven because of the insights Team Cosmos can rapidly provide with MongoDB Charts. Those insights have already improved the onboarding experience for new users and informed feature prioritization through user search and interaction data.

Beyond a powerful library of visualizations, MongoDB Charts is easy to use and easy to get started with too. There was no time spent trying to get access to a tool owned by another team, and choosing an integrated data visualization solution meant less time learning multiple new systems. “I've heard that some people in our company have success with pulling data out of RedShift and visualizing it with Tableau. Our team doesn’t know how to do that, so I would say [going with Charts] saved us countless hours.” Leary added, “Once we had our tracking service up and connected to Atlas, It took less than a day to create both dashboards that [we primarily use today].”

Doug Sappet added “There is an upfront cost and time savings, charts saved us from needing to create and deploy our own visualization dashboard app - on the order of weeks. It also helps us continuously. Everytime we need a new visualization, we can do it on the order of minutes to hours rather than days.” Sappet elaborated on their workflow prior to moving to MongoDB Charts to better explain the time savings and productivity gains, “We would previously dump text numbers into a slack thread from ad-hoc queries, whereas now we are able to reload visualizations on a Charts dashboard as opposed to asking a dev to re-run a query, in that sense we are infinitely more efficient.”

Sappet went on to describe how the speed gained on his team has impacted other teams, adding that they will often have requests for new metrics during bi-weekly meetings with stakeholders. “There's been a couple of times that before the meeting even ends, you can reload the page and the [new] chart is there. It’s very easy and rapid the way we can do that. We don't have to deploy code or do anything crazy and it's there for our product owner immediately.”

Speed-to-insight and an easy-to-use tool are great, but ultimately, data that drives the product and business forward are what makes Carlos Fernandez, Director of Engineering - App Framework, excited about the work his team is doing with the help of Charts, “The main reason Charts has been great for us is [showing] who looks at the data. Our product teams have the metrics right there when they need to adjust or to make decisions on the fly for all the features that we are constantly delivering.”

“The main reason Charts has been great for us is [showing] who looks at the data. Our product teams have the metrics right there when they need to adjust or to make decisions on the fly for all the features that we are constantly delivering.”