Couchbase and MongoDB are two types of document-oriented NoSQL databases. Couchbase is widely used for web, mobile, and IoT applications. Like Couchbase, MongoDB is a general-purpose database, suitable for large enterprises, that can be used for a wide variety of use cases.

Whether it’s technical features, adoption and support, or cloud solutions, MongoDB is trusted by more organizations to run a wider range of applications than Couchbase for a number of key reasons.

Here’s a brief look at eight key feature differences between both databases.

Starting out as a key-value (k-v) store for simple caching workloads, Couchbase has evolved over the past few years to include support for indexing, text search, and analytics.

However, this growth in functionality comes at a cost: an explosion in complexity for developers. Couchbase requires developers to learn four different, incompatible query languages. And, for Ops teams that run Couchbase clusters, each node type introduces different hardware, scaling, and high-availability requirements to navigate.

As a result, organizations are more likely to use Couchbase as a Memcached replacement, or as a simple session store (see Amadeus example below). Memcached is an open-source in-memory key-value store, often used for short-term storage.

MongoDB, on the other hand, avoids this complexity with consistent secondary indexes and a rich, unified query language.

Both MongoDB and Couchbase support scaling horizontally. In MongoDB, this is done by sharding the collection across multiple nodes.

Couchbase is multi-dimensionally distributed because the individual services such as indexing, querying, and data storage can be scaled depending on which service has the increased demand. MongoDB is uniformly distributed, with data distributed evenly across shards and using the mongod and mongos services. Mongod manages the data, indexing, and queries on every node and/or shard. Mongos manages the querying process and merging of results from distributed nodes.

Developers want to work with MongoDB. A lot.

For the fourth year in a row, MongoDB was voted StackOverflow’s “Most Wanted” database in 2020. In the same survey, Couchbase ranked second-to-last on the ‘Most Wanted’ scale and, even worse, second in the “Most Dreaded” database category.

The results matter for a couple of reasons:

We live in a “developer-defined economy,” where business success is tightly linked to how empowered developers at your organization are. Developers, hamstrung by tools they dislike, will hinder an organization's ability to innovate and compete.

A recent study by McKinsey takes this concept a step further. Ranking businesses on a “Developer Velocity Index (DVI),” McKinsey found that firms with a higher DVI score were more successful than their peers on a number of critical business measures, like revenue CAGR. The report concludes, “Our research shows that best-in-class tools are the top contributor to business success—enabling greater productivity, visibility, and coordination.”

The message is clear: If you’re an enterprise that wants to compete, don’t choose the database developers “dread” working with. 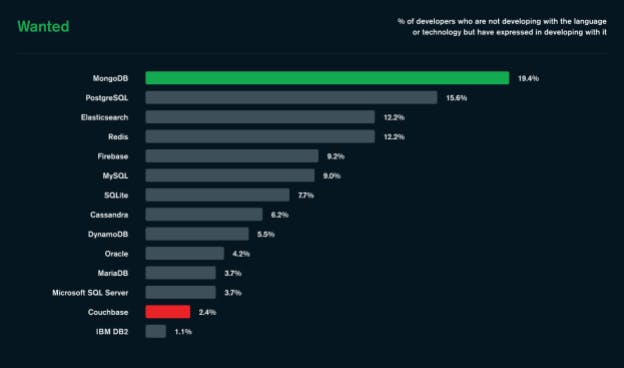 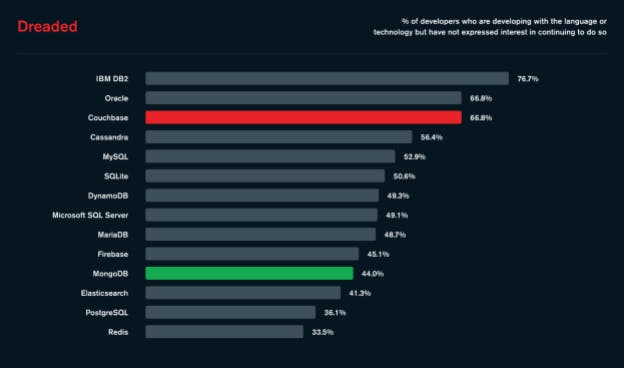 When faced with a decision between Couchbase and MongoDB, leading companies choose MongoDB.

According to Olaf Schnapauff, CTO of travel technology firm Amadeus, "Amadeus is using MongoDB as the Swiss army knife of NoSQL technology. We also use Couchbase as a key value store and as a caching layer for large query volumes when the search is across only a few dimensions.”

“We started out with Couchbase. As many of our customers are field rather than office-based, I was attracted by its mobile capabilities. But it really didn’t work out for us.” According to Kelley, Couchbase was fast for simple key-value lookups (sound familiar?), but performance suffered when attempting anything more sophisticated.

More organizations are moving towards a cloud, and more recently a multi-cloud, model. Perhaps the starkest difference between MongoDB and Couchbase, therefore, is their respective cloud offerings.

MongoDB Atlas is available across all of the major cloud providers (Amazon Web Services [AWS], Google Cloud Platform, and Microsoft Azure) in over 95 regions around the world.

Couchbase Cloud, on the other hand, is only available in a limited number of AWS and Azure regions across North America and Europe. True multi-cloud support is also not available from Couchbase. How about a Data Lake equivalent? Nope. A Realm competitor? Not really.

Put simply, if you’re an enterprise deploying to the cloud, there’s a clear choice. MongoDB Atlas is by far the more mature, powerful, and versatile offering.

To recap, MongoDB is:

With 26,800+ customers in more than 100 countries around the world, including more than half of the Fortune 100, more than 175 million downloads, 1,000+ partners, and over 1.5 million developers and other IT professionals registering for training through the MongoDB University, MongoDB is the market’s most widely deployed non-tabular document-based database.