MongoDB 3.6 is now Generally Available (GA), and ready for production deployment. In this short blog series, I’ll be taking you on a whirlwind tour of what’s new in this latest release:

If you want to get the detail now on everything the new release offers, download the Guide to what’s New in MongoDB 3.6.

MongoDB has always been a developer-first technology. Its document data model maps naturally to objects in application code, making it simple for developers to learn and use. A document’s schema can be dynamically created and modified without downtime, making it fast to build and evolve applications. Native, idiomatic drivers are provided for 10+ languages – and the community has built dozens more – enabling ad-hoc queries, real-time aggregation and rich indexing to provide powerful programmatic ways to access and analyze data of any structure.

MongoDB 3.6 builds upon these core capabilities to allow developers to create rich apps and customer experiences, all with less code.

Change streams enable developers to build reactive, real-time, web, mobile, and IoT apps that can view, filter, and act on data changes as they occur in the database. Change streams enable seamless data movement across distributed database and application estates, making it simple to stream data changes and trigger actions wherever they are needed, using a fully reactive programming style.

Implemented as an API on top of MongoDB’s operation log (oplog), consumers can open change streams against collections and filter on relevant events using the $match, $project, and $redact aggregation pipeline stages. The application can register for notifications whenever a document or collection is modified, enabling downstream applications and consumers to act on new data in real time, without constantly querying the entire collection to identify changes. Applications can consume change streams directly, via a message queue, or through a backend service such as MongoDB Stitch (coming soon).

Use cases enabled by MongoDB change streams include:

Some MongoDB users requiring real-time notifications have built their own change data capture processes that “tail” the oplog. By migrating to change streams, these users can reduce development and operational overhead, improve usability, and increase data reliability. When compared to both oplog tailing and change notifications implemented by alternative databases, MongoDB change streams offer a number of advantages:

The addition of retryable writes to MongoDB moves the complexity of handling temporary system failures from the application to the database. Now, rather than the developer having to implement custom, client-side code, the MongoDB driver can automatically retry writes in the event of transient network failures or a primary replica election, while the MongoDB server enforces exactly-once processing semantics.

By assigning a unique transaction identifier to each write operation, the driver re-sends that ID to enable the server to evaluate success of the previous write attempt, or retry the write operation as needed. This implementation of retryable writes offers a number of benefits over approaches taken by other databases:

With tunable consistency, MongoDB affords developers precise control over routing queries across a distributed cluster, balancing data consistency guarantees with performance requirements. MongoDB 3.4 added linearizable reads, which were central to MongoDB passing Jepsen – some of the most stringent data safety and correctness tests in the database industry.

Now the MongoDB 3.6 release introduces support for causal consistency – guaranteeing that every read operation within a client session will always see the previous write operation, regardless of which replica is serving the request. By enforcing strict, causal ordering of operations within a session, causal consistency ensures every read is always logically consistent, enabling monotonic reads from a distributed system – guarantees that cannot be met by most multi-node databases.

MongoDB Compass is not just a single tool – it’s a framework built to allow for the addition of modular components. Compass now exposes this as the Compass Plugin Framework, making Compass extensible by any user with the same methods used by MongoDB’s software engineers. Using the plugin API, users can build plugins to add new features to Compass. Examples include a GridFS viewer, a sample data generator, a hardware stats viewer, a log collector/analyzer, and more.

You can learn more about these new features in the MongoDB Compass documentation.

With the MongoDB 3.6 release, the Compass family has expanded to now include the new, no-cost Compass Community edition.

Compass Community provides developers an intuitive visual interface to use alongside the MongoDB shell. It includes the core features of Compass, enabling users to review the hierarchy and size of databases and collections, inspect documents, and insert / update / delete documents. Developers can use the GUI to build queries, examine how they’re executed, and add or drop indexes to improve performance. Compass Community also supports the latest Compass functionality available with MongoDB 3.6, making developers even more productive. 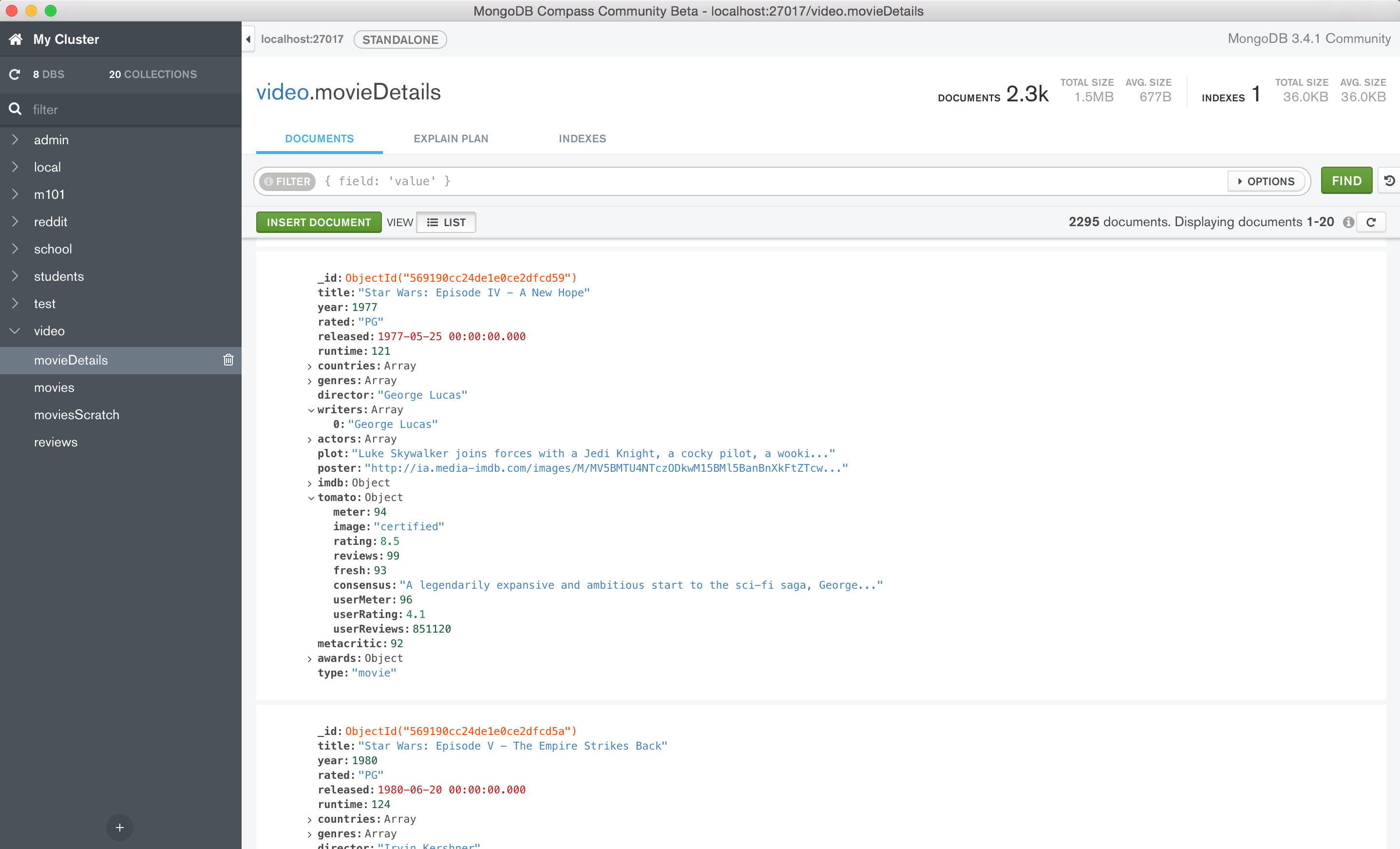 MongoDB Compass Community is available from the MongoDB download center.

Arrays are a powerful construct in MongoDB’s document data model, allowing developers to represent complex objects in a single document that can be efficiently retrieved in one call to the database. Before MongoDB 3.6, however, it was only possible to atomically update the first matching array element in a single update command.

With fully expressive array updates, developers can now perform complex array manipulations against matching elements of an array – including elements embedded in nested arrays – all in a single atomic update operation. MongoDB 3.6 adds a new arrayFilters option, allowing the update to specify which elements to modify in the array field. This enhancement allows even more flexibility in data modeling. It also delivers higher performance than alternative databases supporting JSON data as entire documents do not need to be rewritten when only selective array elements are updated.

That wraps up the first part of our what’s new blog series. Remember, if you want to get the detail now on everything the new release offers, download the Guide to what’s New in MongoDB 3.6.

For years, Accenture and MongoDB have been committed to enabling organizations to leverage the power of data to gain a competitive edge. Today, we are excited to announce the availability of MongoDB Enterprise Server as part of the Accenture Insights Platform (AIP).