It is no longer sufficient for organizations to deliver run-of-the mill business process applications. Mobile, social, web and sensor-enabled applications are not just potential differentiators — in many cases, they are now essential for remaining relevant. Trying to force-fit data models designed decades ago to support these new types of applications inhibits agility and drives up cost and complexity. Semi-structured and unstructured data does not lend itself to be stored and processed in the rigid row and column format imposed by relational databases, and cannot be fully harnessed for real time analytics if stored as opaque BLOBS in simple Key-Value databases.

As a result, more developers are turning to document databases such as MongoDB that allow data to be represented as rich structures, providing a viable alternative to the standard, normalized, relational model. MongoDB has a number of unique features such as atomic updates, indexed array keys, and a powerful query framework that can significantly influence schema design. While many developers have internalized the rules for designing schemas for relational databases, these same rules don't apply to document databases. This blog post series will demonstrate how to take advantage of documents to build modern applications.

The most fundamental difference between relational databases and MongoDB is the way in which the data is modeled. Before getting into the details, lets compare the terminology used in the relational and document model domains:

Schema design requires a change in perspective for data architects, developers and DBAs:

With sub-documents and arrays, JSON documents also align with the structure of objects in modern programming languages. This makes it easy for developers to map the data used in the application to its associated document in the database. By contrast, trying to map the object representation of the data to the tabular representation of an RDBMS can slow down development. Adding Object Relational Mappers (ORMs) can create additional complexity by reducing the flexibility to evolve schemas and to optimize queries to meet new application requirements.

So how do I JOIN my Data?

The first concern from those coming from a relational background is the absence of JOINs in non-relational databases. As demonstrated below, the document model makes JOINs redundant in many cases. 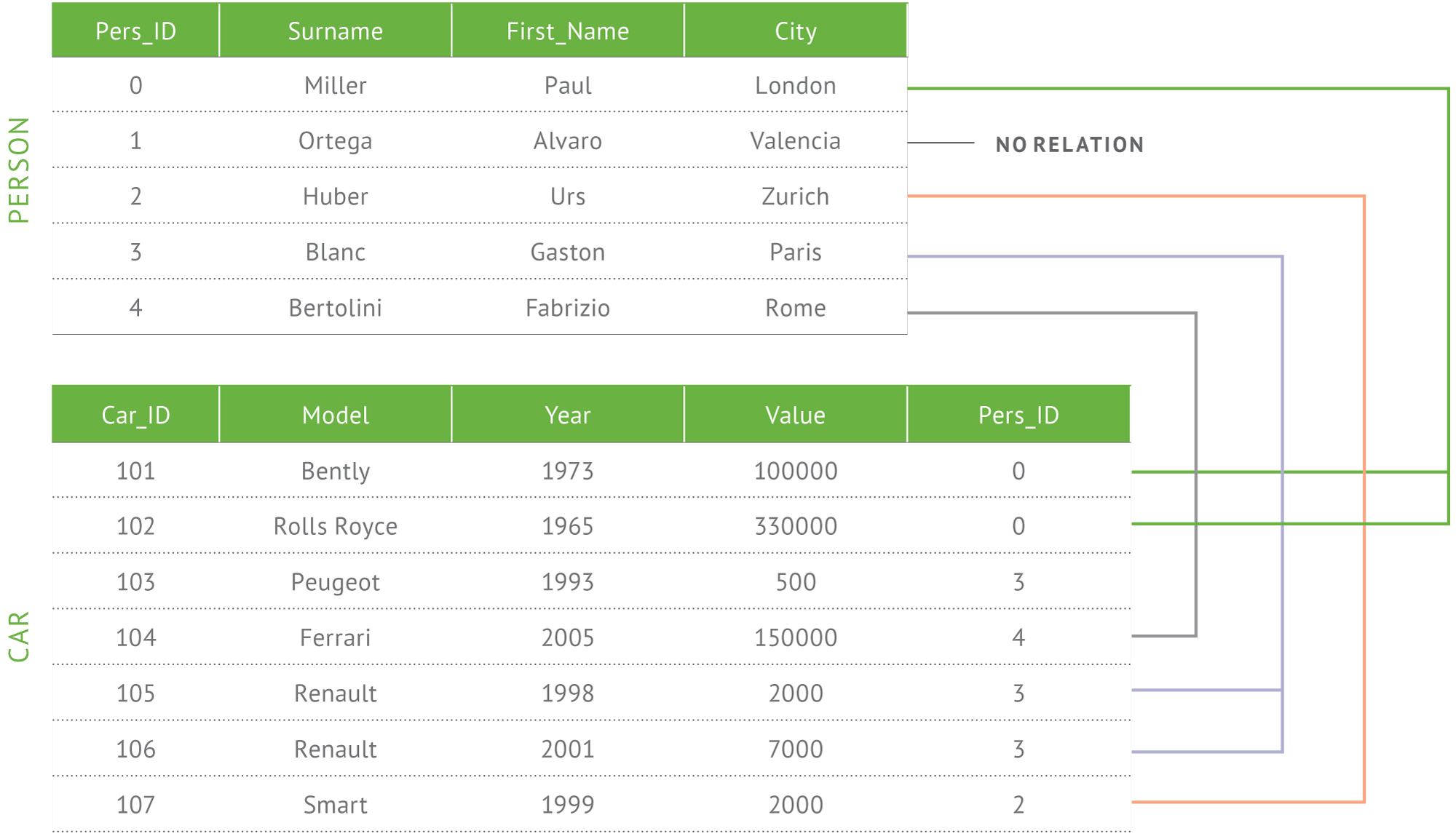 In Figure 1, the RDBMS uses the Pers_ID field to JOIN the “Person” table with the “Car” table to enable the application to report each car’s owner. Using the document model, embedded sub-documents and arrays effectively pre-JOIN data by aggregating related fields within a single data structure. Rows and columns that were traditionally normalized and distributed across separate tables can now be stored together in a single document, eliminating the need to JOIN separate tables when the application has to retrieve complete records.

Modeling the same data in MongoDB enables us to create a schema in which we embed an array of sub-documents for each car directly within the Person document.

In this simple example, the relational model consists of only two tables (in reality most applications will need tens, hundreds or even thousands of tables.) This approach does not reflect the way architects think about data, nor the way in which developers write applications. The document model enables data to be represented in a much more natural and intuitive way.

The choice of whether to embed related data, or instead to create a reference between separate documents is something we consider in the second part of this blog series.

To further illustrate the differences between the relational and document models, consider the example of a blogging platform in Figure 3. In this example, the application relies on the RDBMS to join five separate tables in order to build the blog entry. With MongoDB, all of the blog data is aggregated within a single document, linked with a single reference to a user document that contains both blog and comment authors. 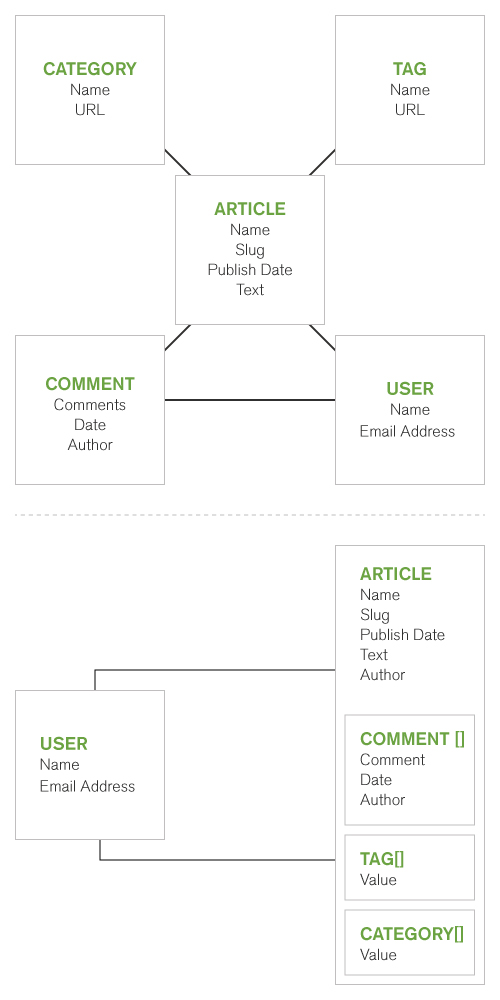 In addition to making it more natural to represent data at the database level, the document model also provides performance and scalability advantages:

So now we’ve introduced some of the concepts, in part 2 of the thinking in documents blog series, we will start to put documents into action by discussing schema design. We will cover how to manage related data with embedding and referencing, we’ll touch on indexing and the MongoDB transaction model.

To learn more, take a look at the Thinking in Documents webinar.

To look at specific considerations in moving from relational databases, download the guide below.
Read the RDBMS Migration Guide
← Previous

Navigating the Future of Data Sovereignty With MongoDB

There are 2.5 quintillion bytes of data created every day , and more and more of that data is being stored in a public cloud. The rise of cloud data storage brings with it a focus on data sovereignty. Governments and industry regulatory bodies are cracking down on protecting user data. At any given time, organizations must know where its data is located, replicated, and stored — as well as how it is collected and processed, prioritizing personal data privacy all along the way. The challenge of GDPR compliance A PwC survey found that 92% of U.S. companies consider GDPR a top data protection priority , and rightly so, as there is pressure from both governments and citizens to protect user data. A recent Vormetric survey found that 85% of American consumers said that if significant personal consequences resulted from their information being compromised as part of a breach, they’d take their business elsewhere. Without a strong handle on data sovereignty, organizations are risking millions of dollars in regulatory fees for mishandling data, loss of brand credibility, and distrust from customers. Where to start with data sovereignty Creating a proper structure for data sovereignty can be complex, and as big data gets bigger, so will the breadth and depth of regulations. The GDPR of today may not resemble the GDPR of tomorrow, and more laws continue to be rolled out at the federal, state, and industry levels. GDPR, while the most notable, is not the only data regulation policy that businesses must consider. California has rolled out the California Consumer Privacy Act, and there are numerous countries that have similar laws in place to protect consumer data and regulate how data is managed, including Japan, India, Egypt, and Australia. And as these regulations continue to be introduced, organizations will need to keep pace to avoid damage to their businesses. Major considerations that impact data sovereignty include: Process: How is your company going to maintain compliance for data sovereignty with efficiency? Infrastructure: Is a legacy infrastructure holding you back from being able to easily comply with data regulations? Scaling: Is your data architecture agile enough to meet regulations quickly as they grow in breadth and complexity? Cost: Are you wasting time and money by leveraging manual processes to adhere to governmental regulations and risking hefty fees attached to incompliance? Penalties: Are your business leaders fully aware of the costs associated with noncompliance? GDPR violations can exact up to €10 million (an average of 2% to 4% of organizational revenue) in penalties. Learn more about strong controls for critical data privacy at our upcoming webinar on queryable encryption . Managing data sovereignty with MongoDB Atlas MongoDB enables you to easily comply with most data privacy regulations. MongoDB Atlas , our cloud database as a service, includes intuitive security features and privacy controls, including: Queryable encryption : Revolutionary to the industry and currently in preview with MongoDB 6.0, queryable encryption enables encryption of sensitive data from the client side, stored as fully randomized, encrypted data on the database server side. This feature delivers the utmost in security without sacrificing performance, ensuring that even the most critical and sensitive workloads are safe and performant in a public cloud. MongoDB Atlas global clusters : It is no longer sustainable or advantageous to build applications across geographic areas and jurisdictions. Doing so requires more infrastructure, more maintenance, more management, and, in turn, more complexity and more resources exhausted. Atlas global clusters allow organizations with distributed applications to geographically partition a fully managed deployment in a few clicks and control the distribution and placement of their data with sophisticated policies that can be easily generated and changed. This means that not only can your organization achieve compliance with regulations containing data residency requirements more easily, but you can also reduce overhead at the same time. Virtual private clouds (VPCs): Each MongoDB Atlas project is provisioned into its own VPC, thereby isolating your data and underlying systems from other MongoDB Atlas users. This allows businesses to meet data sovereignty requirements while staying highly available within each region. Each shard of data will have multiple nodes that automatically and transparently failover for zero downtime, all within the same jurisdiction. Being able to meet data residency requirements is another big technical challenge made simple with MongoDB Atlas . Further, businesses can connect Atlas VPCs to customer infrastructure via private networking (including private endpoints and VPC peering) for increased security. IP whitelists : IP whitelists allow you to specify a specific range of IP addresses against which access will be granted, delivering granular control over data. Client-side field-level encryption (CSFLE) : This feature dramatically reduces the risk of unauthorized access or disclosure of sensitive data. Fields are encrypted before they leave your application, protecting them everywhere: in motion over the network, in database memory, at rest in storage and backups, and in system logs. Dig deeper into data sovereignty To learn more about strong controls for critical data privacy, join MongoDB’s webinar on August 24, 2022 . Our experts will focus on queryable encryption, the industry’s first encrypted search scheme, and how, with MongoDB Atlas, your data is protected with preconfigured security features for authentication, authorization, encryption, and more. Register for our queryable encryption webinar .