MongoDB 4.0 adds the ability to read from secondaries while replication is simultaneously processing writes. To see why this is new and important let's look at secondary read behavior in versions prior to 4.0.

From the outset MongoDB has been designed so that when you have sequences of writes on the primary, each of the secondary nodes must show the writes in the same order. If you change field "A" in a document and then change field "B", it is not possible to see that document with changed field "B" and not changed field "A". Eventually consistent systems allow you to see it, but MongoDB does not, and never has.

On secondary nodes, we apply writes in batches, because applying them sequentially would likely cause secondaries to fall behind the primary. When writes are applied in batches, we must block reads so that applications cannot see data applied in the "wrong" order. This is why when reading from secondaries, periodically the readers have to wait for replication batches to be applied. The heavier the write load, the more likely that your secondary reads will have these occasional "pauses", impacting your latency metrics. Given that applications frequently use secondary reads to reduce the latency of queries (for example when they use "nearest" readPreference) having to wait for replication batches to be applied defeats the goal of getting lowest latency on your reads.

In addition to readers having to wait for replication batch writes to finish, the writing of batches needs a lock that requires all reads to complete before it can be taken. That means that in the presence of high number of reads, the replication writes can start lagging – an issue that is compounded when chain replication is enabled.

Our goal was to allow reads during oplog application to decrease read latency and secondary lag, and increase maximum throughput of the replica set. For replica sets with a high write load, not having to wait for readers between applying oplog batches allows for lower lag and quicker confirmation of majority writes, resulting in less cache pressure on the primary and better performance overall.

How did we do it?

Starting with MongoDB 4.0 we took advantage of the fact that we implemented support for timestamps in the storage engine, which allows transactions to get a consistent view of data at a specific "cluster time". For more details about this see the video: WiredTiger timestamps.

Secondary reads can now also take advantage of the snapshots, by reading from the latest consistent snapshot prior to the current replication batch that's being applied. Reading from that snapshot guarantees a consistent view of the data, and since applying current replication batch doesn't change these earlier records, we can now relax the replication lock and allow all these secondary reads at the same time the writes are happening.

How much difference does this make?

A lot! The range of performance improvements for throughput could range from none (if you were not impacted by the replication lock - that is your write load is relatively low) to 2X. 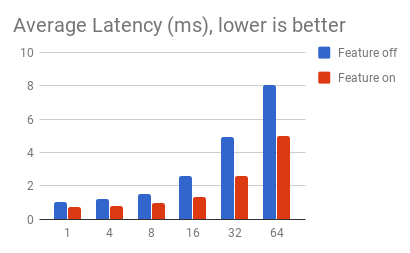 Most importantly, this improves latency for secondary reads – for those who use readPreference "nearest" because they want to reduce latency from the application to the database – this feature means their latency in the database will also be as low as possible. We saw significant improvement in 95 and 99th percentile latency in these tests.

Best part of this new feature? You don't need to do anything to enable it or opt-into it. All secondary reads in 4.0 will read from snapshot without waiting for replication writes.

This is just one of a number of great new features coming in MongoDB 4.0. Take a look at our blog on the 4.0 release candidate to learn more. And don’t forget, you’ve still got time to register for MongoDB World where you can meet with the engineers who are building all of these great new features.

Introducing the MongoDB Masters Program for 2018

My name is Michael Lynn and I’m the Worldwide Director of Developer Advocacy at MongoDB. I’m incredibly proud to be a part of the Developer Relations and Marketing team here at MongoDB. A majority of what we do in Developer Advocacy is related to increasing awareness of MongoDB within the community of developers and data scientists. We do this through involvement in a variety of user groups , industry conferences, and events as well as through management of the MongoDB Masters Program. This program was created to recognize leaders within their community, experts in MongoDB, and professionals who freely share their knowledge. This year’s class includes returning Masters, as well as new members who have distinguished themselves in the past year. MongoDB Masters in years past have provided valuable product feedback and driven thought leadership in their fields. We look forward to deepening this relationship over the coming year. This year’s class of Masters will also be encouraged to participate in beta testing programs, share their experiences with MongoDB, and continue to expand and broaden their own voices as leaders in the technical community. The Masters program has been an incredibly rewarding and valuable program for MongoDB and we greatly appreciate the efforts of our most vocal, and most active supporters. This is why we’ve put so much time and effort into creating a program to recognize these individuals and thank them for their contributions. Master Honorees enjoy benefits ranging from access to the MongoDB Engineering and Product Management teams to discounted MongoDB Atlas Credits . Preparations are underway for the MongoDB Masters Summit, which will be held on Tuesday, June 26th as part of MongoDB World 2018. We’ll have several speakers and a special Q&A session with Eliot Horowitz, our Co-Founder, and CTO. We encourage all members of our community to register for MongoDB World 2018 , meet the Masters in person, and join our Advocacy Hub to start their own path to becoming a MongoDB Master. So, all this talk of Masters – how, you might be thinking, do I become a Master? Before I dive into an explanation of the requirements, please take a moment to review the bios of some of the existing Masters. You’ll easily spot some things in common across all of these incredibly talented and accomplished individuals. Passion Masters are passionate about technology and about solutions to technical problems. This passion drives these individuals to do things that few technologists will do. While this attribute is common among the existing and past Masters, it’s not easy to measure. You know it when you see it and it’s woven into the careers of many of the people I’ve encountered surrounding this program. Impact If passion is fuel, then impact is fire. Impact is the result of the passionate pursuit of worthy causes. Again, this is an attribute easily found in common across our Masters membership. Measuring impact is also difficult because in many cases, especially when dealing with the Masters, the impact of their actions, projects, and even their careers is widespread. Masters are individuals that positively impact their families, teams, companies, and their communities. Execution Execution is the spark that ignites fire. Elegant, efficient and effective solutions to technical challenges rarely, if ever, happen by accident. Rather, truly successful solutions require intelligent, deliberate execution – and in most cases, hard work. I strongly encourage you to spend time with any of the Masters and it will become clear that these individuals know how to execute. They know how to get things accomplished. These are the attributes of a MongoDB Master and to achieve membership, an individual should be passionate about great technology and about solving technical problems. These individuals should have demonstrated, through successful execution, a massively beneficial impact on their company, team and/or community. Are you interested in becoming a MongoDB Master, or do you think you may already meet the requirements? I would like to invite you to join us at MongoDB World in New York to learn more; consider completing the nomination form below to have yourself or a colleague considered for a MongoDB Masters membership. MongoDB Masters membership nomination →