This article was accurate at the time of its publication on 9 June 2015. As we continue to evolve our products and features certain technologies change. With regards to this post, the information about capped collections and sharding is no longer current. For a more up to date article, please see a newer Introduction to Change Streams post.

2 months ago I wrote about how you can tail the oplog also on a sharded cluster, and filter out internal inserts and deletes arising from the balancer process.

After it was published I have received more feedback on the topic, pointing out two scenarios which are still problematic for applications that need to tail the oplog. One actually applies also to non-sharded clusters, the second is still a sharding related issue. Both are perhaps a bit more obscure than what was discussed in the first blog post, but still very real.

The first issue occurs due to failovers. Say you're tailing the oplog from a primary, which experiences some network issue which causes another node to be elected as the new primary, while the old primary eventually steps down. In this situation it is possible that the process tailing the oplog would have read some events that weren't actually replicated to another node yet. Then, when a new primary has been elected, these events aren't actually part of the current state of the database. Essentially, they have never happened - still the process tailing the oplog thinks they did.

(Note that when the old primary at some point wants to re-join the replica set, it will first have to rollback the events that weren't replicated and aren't part of the database anymore.)

The below picture illustrates this sequence of events. Note that events D and E do not exist in the database end state, but the Observer believes they do. 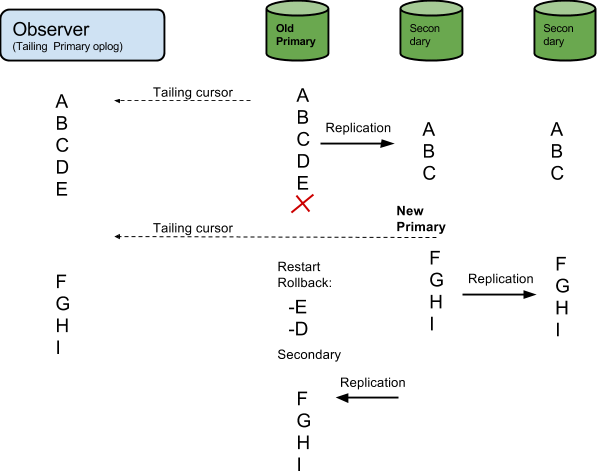 Fortunately, there are several solutions you can use to get a correct read also in the face of failovers and rollbacks:

A good thing with failovers is that they will force any client connection to be closed, and therefore the clients have to reconnect and re-discover the primary in the replica set. As part of this process one could also do something to prevent the above described unwanted situation.

Finally a completely different approach would be to tail the oplogs of a majority or even all nodes in a replica set. Since the pair of the ts & h fields uniquely identifies each transaction, it is possible to easily merge the results from each oplog on the application side so that the "output" of the tailing thread are the events that have been returned by at least a majority of MongoDB nodes. In this approach you don't need to care about whether a node is a primary or secondary, you just tail the oplog of all of them and all events that are returned by a majority of oplogs are considered valid. If you receive events that do not exist in a majority of the oplogs, such events are skipped and discarded.

At MongoDB we are planning to improve the user experience for how to receive change notifications by way of tailing the oplog. One improvement would be to encapsulate one or some of the above techniques to be handled transparently by a library (such as the MongoDB connector). Yet another future solution will be SERVER-18022, which will allow to read data - in this case the oplog - from a snapshot that reflects the majority-committed state of the cluster.

Updates to orphan documents in a sharded cluster

Even if orphan documents - according to their very definition - shouldn't exist, they can appear and are harmless. For example they can appear due to an interrupted chunk migration: documents were inserted into a new shard, but for some reason not deleted from the old one.

In most cases MongoDB will correctly handle their existence. For example, if you connect to a sharded database via mongos, and do a find(), then the mongod process will filter out from the result set any orphan documents it may encounter. (Maybe the same document is returned by the other mongod, where it's existence is valid according to the current chunk distribution.) On the other hand, if you connect directly to the replica set and do the same find(), you will be able to see the orphan document being there. You can even insert() a document with an out-of-range shard key value into the node, to artificially create an orphan document for yourself.

One case where orphan documents unfortunately are currently not detected and filtered out is a multi-update:

If such a multi-update hits an orphan document, the orphan document will be updated, the update will be recorded in the oplog, and replicated. Hence, if you're tailing the oplog in a sharded cluster, you could see these updates that from a cluster-wide point of view are ghost updates - they never happened and shouldn't be visible to the outside.

Unfortunately I'm not aware of any generic and robust way to workaround this issue. For some applications you can minimize the risk of orphan documents ever appearing, by turning off the balancer process and distributing chunks manually:

Fundamentally, this is an issue that needs to be solved in the MongoDB code base. A multi-update should detect and skip orphan documents. As part of improving the user experience for change notification use cases, we will also have to solve this problem somehow. (Solutions are being discussed, but I won't go into details in this post, as my focus was more on listing solutions or workarounds that are currently possible to apply.)

Thank you to our 2000+ attendees and 30+ sponsors who attended MongoDB World 2015. Unable to make the event ? We’ve put together our favorite highlights from this year’s conference. MongoDB World Video Recap 5 New Capabilities in 3.2 Release We previewed new capabilities coming in MongoDB 3.2, including a new connector for BI and Visualization tools (such as Tableau), encryption at rest, support for dynamic lookups, document validation, and mongoScout, a new graphical interface for MongoDB. Announced Our Support of Girls Who Code We’re excited to announce our support of Girls Who Code - a national non-profit organization that works to educate, inspire, and equip high school girls with the skills and resources to pursue opportunities in technical fields. Beginning on June 1st, over the next 90 days when you download MongoDB , you’ll be given the option to have MongoDB donate $1 to Girls Who Code on your behalf. Read our blog post for full details. 2015 Innovation Award Winners Honored The annual MongoDB Innovation Awards recognize organizations and individuals that are creating groundbreaking applications. These projects represent the best and most innovative work in the industry over the last year. A full list of the winners and a brief description of their projects is outlined in our blog post. Scalability Benchmarks Released United Software Associates, Inc., an independent benchmarking and performance testing organization, released a benchmark report showing that MongoDB offers up to 13x better, more predictable scaling than niche NoSQL alternatives. More information can be found in the full report . 10,000,000 MongoDB Downloads We’re thankful to our users for making us a part of their community. Because of your continued support, we’ve reached some new milestones: 10 million downloads 2,000 customers 1,000 partners 300,000 registered students #MongoDBWorld Thanks to our great attendees and speakers we were trending on Twitter . Here are some of our favorite conference tweets: Could be the most informative tech conference I've been to in years. Looking forward to being part of the revolution. #MongoDBWorld &mdash; Mike Oltman (@mikeoltman) June 2, 2015 I learned a lot at #MongoDBWorld and after careful consideration, I claim myself as a new convert. So… https://t.co/VHBECh9w6e &mdash; stewsutton (@stewsutton) June 2, 2015 Really pumped after #MongoDBWorld . #MongoDB 3.2 will cause earthquakes, it'll rock so hard. &mdash; David Alexis (@davealexis) June 3, 2015 Facebook Take a look at our Facebook album for highlights of our favorite MongoDB World moments. (function(d, s, id) { var js, fjs = d.getElementsByTagName(s)[0]; if (d.getElementById(id)) return; js = d.createElement(s); js.id = id; js.src = "//connect.facebook.net/en_US/sdk.js#xfbml=1&version=v2.3"; fjs.parentNode.insertBefore(js, fjs);}(document, 'script', 'facebook-jssdk')); Some of our favorite moments from #MongoDBWorld Posted by MongoDB on Monday, June 1, 2015 Miss MongoDB World or want to relive your favorite talk? Watch the videos below: MongoDB World 2015 Videos