This year's MongoDB World was a huge hit with everyone who attended. There was so much going on that it really was the centre of gravity of the MongoDB Universe. If you couldn't make it, here's a run through of all the things as they happened...

The first day of MongoDB World was dedicated to talks and lots of them. Everything from beginners boot camps for MongoDB users, workshops for MongoDB Stitch, creating with MongoDB Charts, drivers, cluster design, and, among the packed out sessions, Christopher Harris's Tips and Tricks for Indexing MongoDB. Thanks to smart scheduling, those packed out sessions would get a re-run on day three of the conference. Another popular talk was Simplici-tea: Getting Started with MongoDB Charts, where Matt Fairbrass (@matt_d_rat) raced brewing a perfect cup of tea to set up and create charts.

This is nerve racking! @matt_d_rat is taking a challenge of deploying a new instance of #MongoDBCharts, building new charts and a dashboard before he’s able to make a cup of tea, or even before the kettle boils. #MDBW19 pic.twitter.com/Lq05p1Jmxq

A large number of the talks were from MongoDB users, small and large, presenting their experiences, takeaways and top tips for MongoDB. They ranged from their journeys from relational database to the freedom of the document model to building real-time machine learning, there was plenty to learn from. In the coming weeks, we'll be making many of these talks available online.

It wasn't just talks though. Over in the Partner Pavilion, vendors were showing their MongoDB related wares, from analytics to orchestration and from bare metal to services. On the MongoDB stand, there were live demos of all the products and an IoT-enabled slot car racing track which managed the winners with MongoDB. And if you wanted some one-on-one help, the Ask the Experts booth was there to assist with advice from MongoDB engineers. This was also the first MongoDB World with a live blog where you can scroll through catching video, tweets, commentary and more from all three days.

After a full day of talks, the second day centered on the keynotes, especially the morning keynote where the future of MongoDB was due to be mapped out in...

Dev Ittycheria (@dittycheria) MongoDB CEO, opened the morning keynote, calling MongoDB World "An event to celebrate the community". And what a community! MongoDB is now number 5 in the DBEngines survey of databases, and most wanted database in Stack Overflow's survey of developers. There are now one and a half million free database instances on the MongoDB Atlas platform and each day, it processes one hundred and twelve billion queries. With a thriving ecosystem of partners and developers, Dev handed over to MongoDB CTO and co-founder, Eliot Horowitz (@eliothorowitz)to show how MongoDB was moving the technology bar.

The big news was MongoDB 4.2. Now in its second release candidate (rc1), Eliot previewed some of the new features in his keynote. Distributed Transactions bring transactions that can cross shards. Client-Side Field Level Encryption gives you the ability to securely encrypt data so the database only ever works with cipher text.

There's also Wildcard Indexes, designed to index those documents that really exploit the flexible schema of MongoDB, and there's On-Demand Materialized Views that create updatable aggregated collections. If you want to read more check out MongoDB 4.2 Previewed at MongoDB World. And you can learn more about one of those features in Coming in 4.2 - Wildcard Indexes.

You'll know that MongoDB Charts has been clocking up new features in recent months. Well, now MongoDB Charts is Generally Available! The finest, rich charts are available for your dashboards and embedded pages and on MongoDB Atlas they are just a click away for your project.

If you use MongoDB Ops Manager and are bringing in the hotness that is Kubernetes for container orchestration, then you'll be pleased to know MongoDB Enterprise Operator for Kubernetes is generally available too. That means you can control your applications, microservices and MongoDB deployments all from Kubernetes.

Landing in beta on MongoDB Atlas, Full-Text Search is the new power tool for searching your database, harnessing the power of Lucene to filter, rank, and sort through your text to quickly surface the most relevant results. It's a MongoDB Atlas service which takes just moments to enable. Also coming to Atlas is CPU and Memory auto scaling to complement the existing storage scaling. We covered those features in Full-Text Search and Auto Scaling Coming To MongoDB Atlas on the MongoDB Blog.

And Eliot kept the best for last. MongoDB Atlas Data Lake debuted at MongoDB World. This new service allows users to run MQL queries and aggregations on data stored in S3 files in JSON, BSON, CSV, TSV, Avro, and Parquet formats. There's no moving of data either, it's all done in place with the S3 files with no need to predefine a schema for the stored data. Atlas Data Lake a whole new way to use your existing tools to sift through your data lakes and Eliot impressed with a live demo of its functionality.

Check out the complete list of every new product and feature by downloading the "MongoDB 4.2: Guide to What's New".

All through the day, there was time for talks, and after the keynote the subjects moved to include the new features and products. Kenn White's (@kennwhite) talk on the new Client-Side Field Level Encryption features of MongoDB was particularly well received on account of it being a deep dive with code around a new security feature. Other stand out talks included Tom Hollander's (@tomhollander) Go on a Data Safari with MongoDB Charts (which also got an encore session) and Ben Cefalo's (@bencefalo) Modern Data Backup and Recovery from On-premises to the Public Cloud.

Ben was back later in the day with Doug Tarr (@tarr11) to give a deep dive into the MongoDB Atlas Full-Text Search in another popular talk. IAG's Simon Aubrey and Kieran Clulow also impressed the audience with their "Single View of Everything" talk which looked at how IAG use MongoDB and Apache Kafka together to stream 4.4 billion events in real time for 13 million customers.

The afternoon keynote included talks from IBM's Adam Storm (@stormadamj) on what change looks like and Emily Freeman (@editingemily) on trust, communities, celebrity and writing a book. Then there were the awards for partners and the big event, a live voting session to select the winner of the MongoDB World 2019 Hackathon. The audience picked Vinit Todai's Brainhack Wheelchair to receive the $10,000 prize.

The third day of MongoDB World opened with encores for the most popular talks and then it was time for the first MongoDB World Builders Fest. The conference space was filled with pods for hands-on learning and tutorials. The subjects included using MongoDB's Atlas and Stitch, getting a Raspberry Pi to send IoT data to MongoDB and creating great MongoDB Charts. And there was a pod showing particular non-computing talents like food sculpture, jump rope and even how to pick a lock (as an introduction to the subtleties of security). 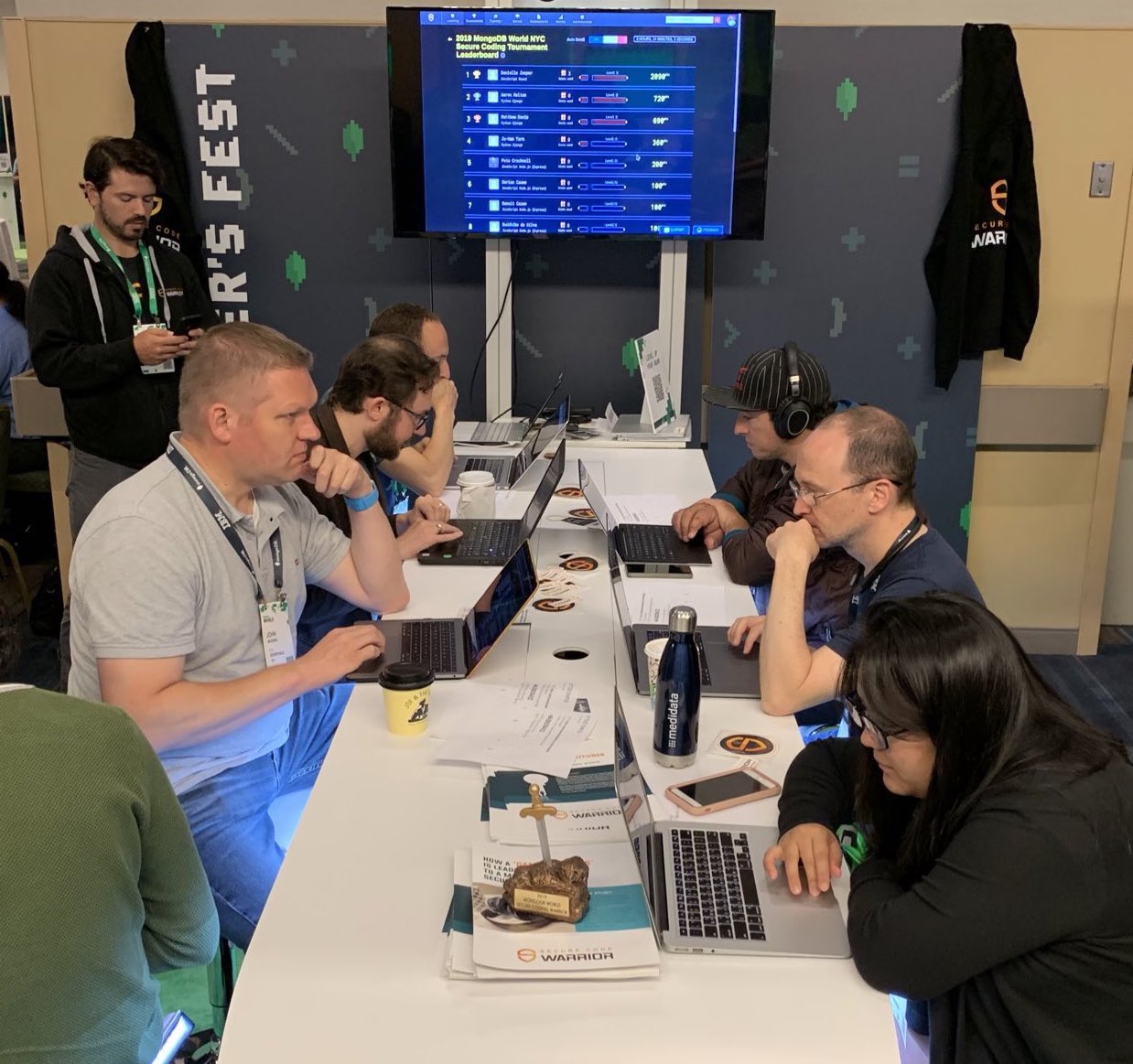 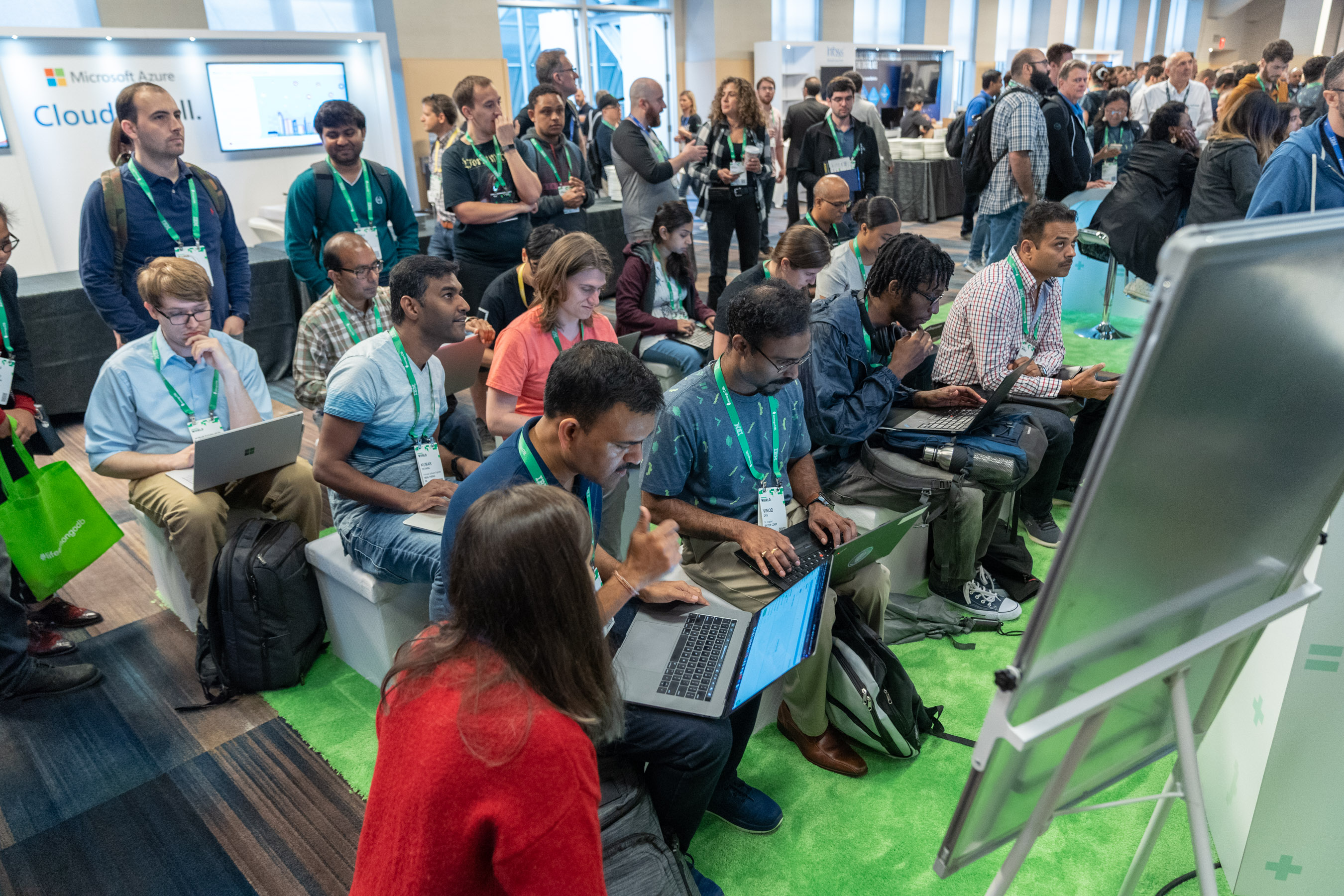 A busy pod builds with Atlas 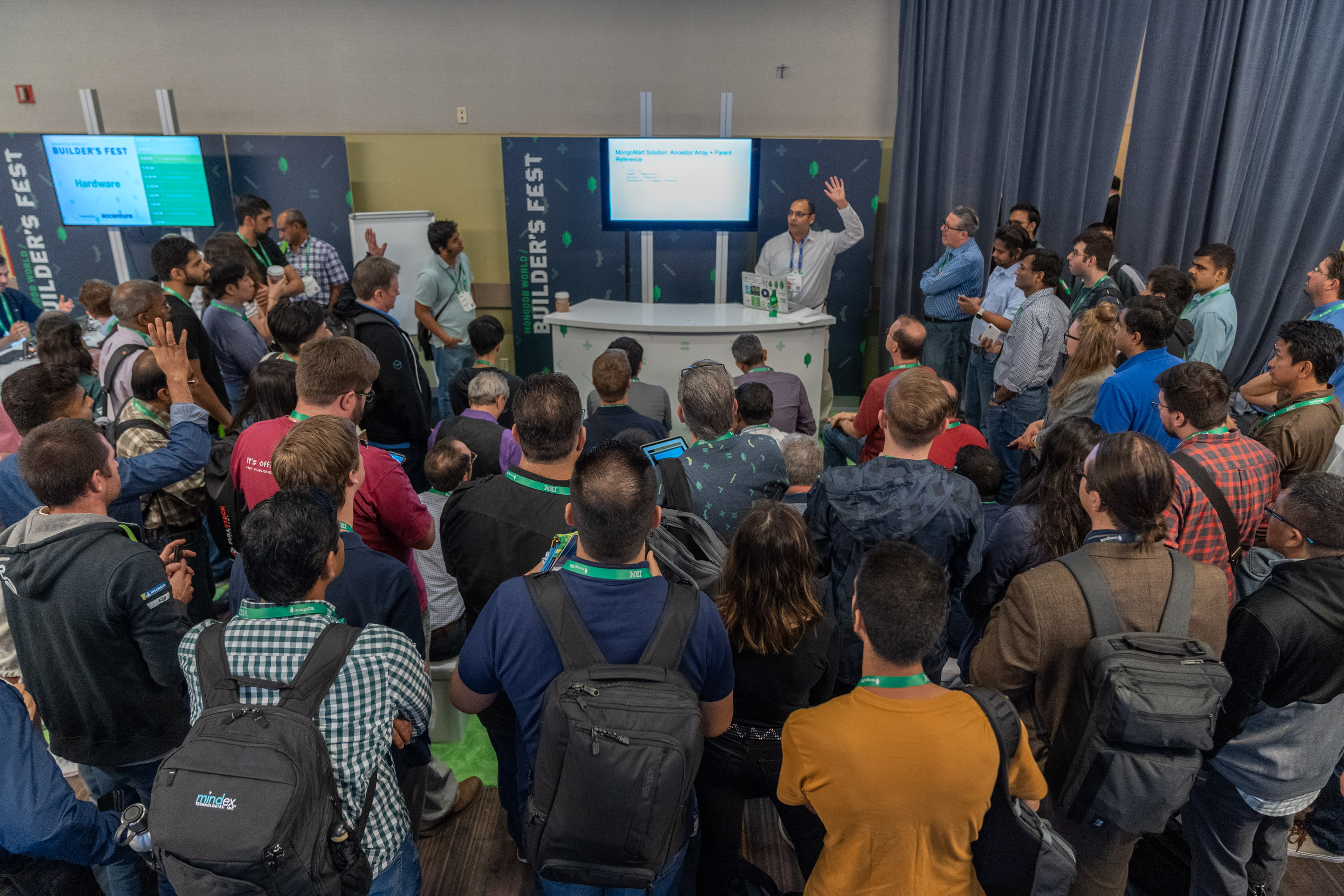 Many of the pods were packed out throughout the day, as were the gaming platform, code challenges and security tests, all with their own space. A day of solid learning and fun ensued, something that you'd have to be at MongoDB World to experience.

And that was that. Over 2000 attendees, over 100 talks, 200 Ask the Experts sessions and a Hackathon with 900 participants from around the world, MongoDB World 2019 was over. So, if you missed it, get in early and register now for 2020's MongoDB World.

Python and MongoDB: How does MongoDB use Python?

After staffing the MongoDB booth at the recent PyCon, John Yu came away with the one question that so many people asked: "How does MongoDB use Python?". In this post, John sets out to answer that question, from in-house use to published code.