Welcome back to our blog series highlighting the differences between developing an app with MongoDB vs. with RDBMS/SQL. Last week, we began to cover Day 14 and added a list of startup apps organized by region. We also added data that was provided to us by an external entitlements service. This week we’re going to continue our discussion of Day 14 by diving into queries.

Before we begin, let's refresh our memories with the framework we’ve been using to stage our discussion.

The big difference between SQL and MongoDB’s query language is that the latter is not a single string “sentence.” It doesn’t require white spaces in between words, or commas, or parentheses, or quoted characters. Instead, MongoDB uses a “cascade” of operator/operand structures, typically in name:value pairs. In other words, the operand in one structure can be another operator/operand structure.

This makes things very exciting for developers because the same techniques we use in our code to manipulate rich shapes of data going into and coming out of MongoDB - whether it’s Java, Python, JavaScript, etc. - can be used to construct, manipulate, and “parse” our query expressions. In fact, no parser is necessary. It is trivially easy to walk the cascade with standard programming techniques and find fields, values, etc. Because the query expression is a structured cascade and not a single string, this also means that it is easy to incrementally add subexpressions to the query without first having to break it apart into component pieces.

Now let’s look at some compare and contrast, side-by-side code examples for queries. 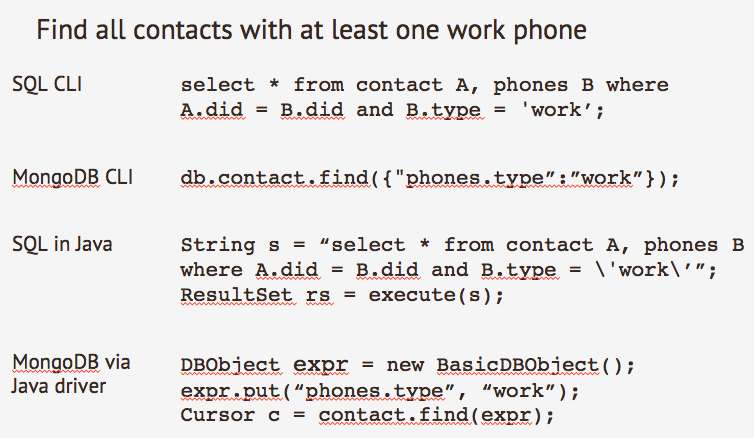 First, we see one of the popular command line interpreters for SQL which is going to fetch us some contacts and phones. This will yield a rectangle, as we saw in earlier posts.

Next, in the MongoDB command line interpreter (“CLI”), we set up the equivalent query. Notice that we can use “dotpath” syntax to address subfields within fields in the rich shape. It is also worth noting that the “equals” operator is so common that as a shortcut, MongoDB interprets name:value as “name = value”, without having to explicitly supply the $eq operator.

Third, we see the equivalent query in Java / JDBC. Note that although the “sentence” is similar, we start to bump into irritants like escaping quotes.

Lastly, we see the equivalent in MongoDB via the Java driver.

We can see that the overall semantics of queries in MongoDB and SQL are the same and follow the common pattern of query setup, issuance of query, and iteration over a cursor. 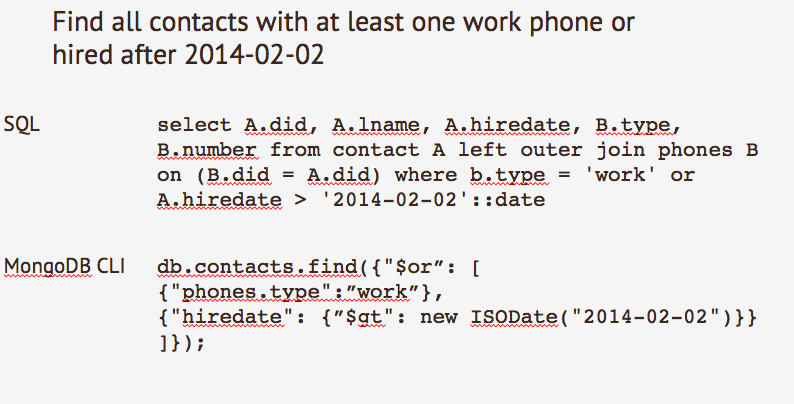 In this query, we’re looking for contacts who either have at least one work phone OR have been hired after a specific date. Again, we can see that the equivalent in MongoDB is pretty straightforward. Note the use of dollar signs in the operator names (`$or`, `$gt`) as syntactic sugar. Also note that in both examples it’s important to use an actual date in our comparison, not a string.

The equivalent query in Java / JDBC will look largely the same as before, with a few more escaped quotes.

However, in practice it isn’t as complicated as it appears -- and it actually offers more flexibility than SQL:

If we extrapolate beyond this small code example, it’s evident how easy it is to add more expressions into the $or statement, or to call out to another function that independently crafts a small filtering fragment that we can add to our overall query. As dynamic queries become more complex in SQL, however, the syntactic sugar that makes SQL “human readable” in the CLI begins to work against you in the programmatic construction of a query.

We’ve used the very basic Java query APIs to illustrate the operator/operand nature of the language. We also deliberately chose standard Java HashMap objects to further reduce coupling until the last moment - when we constructed the BasicDBObject to pass to the find() method. For greater convenience, a Builder pattern set of APIs exist as well, but in the end it is still building a cascade of operator/operand structures.

MongoDB offers capabilities you come to expect in a full-featured query language including:

Perhaps the most important feature is the Aggregation Framework (“agg”), MongoDB’s answer to SQL’s GROUP BY clause. Exploring the power of agg is an entire blog in its own right; please see Asya Kamsky’s posts to get an idea of the agg’s power and programmability. For now, here’s an example to get you thinking about it. Suppose we want to count all the different kinds of cell phones owned by our contacts hired before June 1, 2013. Let’s make it a bit more interesting - let’s capture the names of the people who have these phones and only emit those types where more than 1 person has it. Expressed in the MongoDB CLI, we’d try this:

The important concepts to grasp with agg are:

Of course, all this functionality is performed efficiently at the engine, not in the client, so millions (or billions) of documents do not have to be dragged across the network.

Next week, we’ll dive into RAD (Rapid Agile Development) and switch over to some Python examples.

About the Author - Buzz Moschetti

MongoDB World Call for Proposals Open: Here’s What You Need to Know