Update: May 2, 2018
Our developer preview of MongoDB Enterprise Server running on OpenShift now includes a simple OpenShift Template. The mongodb-openshift-dev-preview.template.yaml template file reduces the complexity and additional requirements of running OpenShift with the --service-catalog enabled and deploying the Ansible Service Broker (not to mention needing to install the apb tool on your development system in order to build and deploy the Ansible Playbook Bundle). Currently the template can provision multiple pods each running an automation agent configured to the same MongoDB Ops Manager Project. You can complete the deployment of a MongoDB replica set with a few quick clicks in the Ops Manager user interface. We hope the removal of these additional dependencies helps you and your organization quickly adopt this modern, flexible, and full featured way to deploy and run MongoDB Enterprise on your OpenShift clusters. And, stay tuned! This is the tip of the iceberg for support of your cloud native workloads from MongoDB.

In order to compete and get products to market rapidly enterprises today leverage cloud-ready and cloud-enabled technologies. Platforms as a Service (or PaaS) provide out-of-the-box capabilities which enable application developers to focus on their business logic and users instead of infrastructure and interoperability. This key ability separates successful projects from those which drown themselves in tangential work which never stops.

In this blog post, we'll cover MongoDB's general PaaS and cloud enablement strategy as well as touch upon some new features of Red Hat’s OpenShift which enable you to run production-ready MongoDB clusters. We're also excited to announce the developer preview of MongoDB Enterprise Server running on OpenShift. This preview allows you to test out how your applications will interact with MongoDB running on OpenShift.

Integration Approach for MongoDB and PaaS

Platforms as a Service are increasingly popular, especially for those of you charged with building "cloud-enabled" or "cloud-ready" applications but required to use private data center deployments today. Integrating a database with a PaaS needs to be done appropriately to ensure that database instances can be deployed, configured, and administered properly.

There are two common components of any production-ready cloud-enabled database deployment:

A deep integration of MongoDB Ops Manager is core to our approach of integrating MongoDB with popular PaaS offerings. The general design approach is to use the "separation of concerns" design principle. The chosen PaaS handles the physical or virtual machines, CPU and RAM allotment, persistent storage requirements, and machine-level access control, while MongoDB Ops Manager controls all aspects of run-time database deployments

This strategy enables system administrators to quickly deploy "MongoDB as a Solution" offerings within their own data centers. In turn, enterprise developers can easily self-service their own database needs.

If you haven't already, download MongoDB Ops Manager for the best way to run MongoDB.

Our "developer preview" for MongoDB on OpenShift can be found here: https://github.com/jasonmimick/mongodb-openshift-dev-preview. The preview allows provisioning of both MongoDB replica sets and "agent-only" nodes (for easy later use as MongoDB instances) directly through OpenShift. The deployments automatically register themselves with an instance of MongoDB Ops Manager. All the technical details and notes of getting started can be found right in the repo. Here we'll just describe some of functionality and technology used.

The preview requires access to an OpenShift cluster running version 3.9 or later and takes advantage of the new Kubernetes Service Catalog features. Specifically, we're using the Ansible Service Broker and have build an Ansible Playbook Bundle which installs an icon into your OpenShift console. The preview also contains an example of an OpenShift template which supports replica sets and similar functionality.

A tour and deploying your first cluster:

Once you have your development environment ready (see notes in the developer preview Github repository) and have configured an instance of MongoDB Ops Manager you're ready to starting deploying MongoDB Enterprise Server. 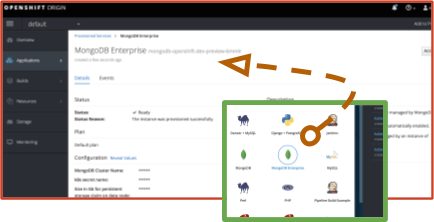 Clusters can be provisioned through the OpenShift web console or via command line. The web console provides an intuitive "wizard-like" interface in which users specify values for various parameters, such as MongoDB version, storage size allocation, and MongoDB Ops Manager Organization/Project to name a few.

Command line installs are also available in which parameter values can be scripted or predefined. This extensibility allows for automation and integration with various Continuous Integration and Continuous Delivery technologies.

A future post will detail cluster configuration and various management scenarios, such as upgrades, performance tuning, and troubleshooting connectivity, so stay tuned.

We're excited to introduce simple and efficient ways to manage your MongoDB deployments with tools such as OpenShift and Kubernetes. Please try out the developer preview and drop us a line on Twitter #mongodb-openshift or email bd@mongodb.com for more information.

Be a part of the largest gathering of the MongoDB community. Join us at MongoDB World.
← Previous

Participate in a 2-day celebration of MongoDB and open source

At MongoDB World , you'll be able to amp up your skills in deep-dive sessions that cover the latest features and give insight into the product roadmap. You’ll also have plenty of opportunities to get to know fellow community members. From classroom-style technical workshops to receptions, the largest MongoDB conference offers a ton of activities you can get involved in. Ask the Experts Sign up for a consulting slot to get your questions answered by MongoDB experts who will help whiteboard solutions to your top-of-mind questions. Black Network Happy Hour Get to know event attendees and members of the MongoDB Black Network over (alcoholic and non-alcoholic) drinks on Day 1 of the conference. Community Day A one-day celebration of MongoDB and open source, complete with Q&A time with MongoDB's Co-Founder and CTO Eliot Horowitz, and plenty of unconference and hack time. Craft Beer Tasting Enjoy local beers at the MongoDB World closing celebration. Non-alcoholic options will be available. Leaf Lounge Socialize, learn, or just relax and rejuvenate with your new friends. We promise to keep the coffee flowing. LGBTQ Happy Hour The MongoDB LGBTQ group extends an invitation to anyone who identifies as queer for drinks. Mocktails will be available. N00bs Reception First time attending MongoDB World? Connect with other first time attendees at the N00bs social. There will be snacks. Workshops Enhance your MongoDB World learning experience by attending an in-depth technical workshop on Day 1 of MongoDB World. Workshops cost $499 and run 9:00am - 5:00pm. Participants get access to on-demand MongoDB University courses and special swag. Class size is strictly limited to ensure individual attention. Women and Trans Coders Lounge Run by MongoDB’s Women and Trans Coders group, the purpose of this space is to amplify the voices of non-binary people, women, and trans people of all genders within our engineering community. Women in Tech Happy Hour Connect with other women in tech over drinks (including non-alcoholic options). Join us on June 26-27 for two days of geeking out and having fun. Register by May 11 to pay only $399 for your conference pass. Register Now Event Details: Date: June 26-27, 2018 Location: New York Hilton Midtown, 1335 6th Ave, New York, NY 10019 https://www.mongodb.com/world *All happy hours will also serve non-alcoholic drink options.