If you have logged into MongoDB Atlas recently – and you should, the entry-level tier is free! – you may have noticed a strange new syntax on 3.6 connection strings.

What is this mongodb+srv syntax?

Well, in MongoDB 3.6 we introduced the concept of a seed list that is specified using DNS records, specifically SRV and TXT records. You will recall from using replica sets with MongoDB that the client must specify at least one replica set member (and may specify several of them) when connecting. This allows a client to connect to a replica set even if one of the nodes that the client specifies is unavailable.

You can see an example of this URL on a 3.4 cluster connection string: 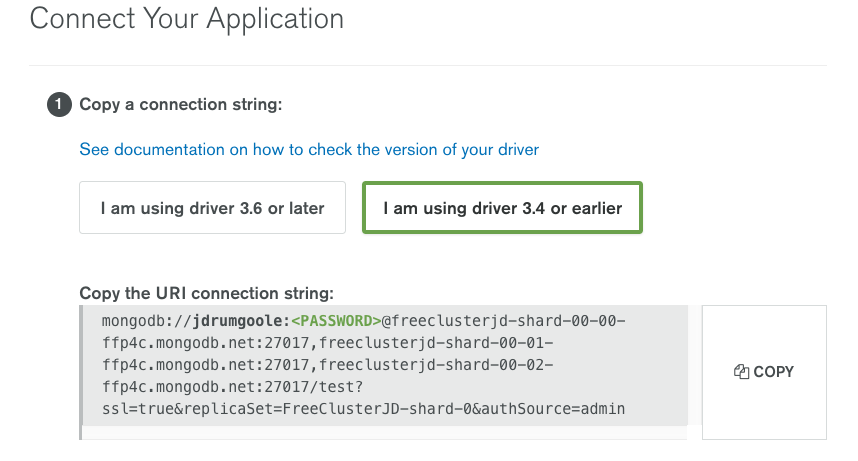 Note that without the SRV record configuration we must list several nodes (in the case of Atlas we always include all the cluster members, though this is not required). We also have to specify the ssl and replicaSet options.

With the 3.4 or earlier driver, we have to specify all the options on the command line using the MongoDB URI syntax.

The use of SRV records eliminates the requirement for every client to pass in a complete set of state information for the cluster. Instead, a single SRV record identifies all the nodes associated with the cluster (and their port numbers) and an associated TXT record defines the options for the URI.

We can see how this works in practice on a MongoDB Atlas cluster with a simple Python script.

We can run this script using the node specified in the 3.6 connection string as a parameter.

You can also do this lookup with nslookup:

As you can see, the complexity of the cluster and its configuration parameters are stored in the DNS server and hidden from the end user. If a node's IP address or name changes or we want to change the replica set name, this can all now be done completely transparently from the client’s perspective. We can also add and remove nodes from a cluster without impacting clients.

So now whenever you see mongodb+srv you know you are expecting a SRV and TXT record to deliver the client connection string.

I have set up a demo replica set on AWS with a three-node setup. They are :

Each has a mongod process running on port 27022. I have set up a security group that allows access to my local laptop and the nodes themselves so they can see each other.

I also set up the DNS names for the above nodes in AWS Route 53.

We can start the mongod processes by running the following command on each node.

Now we need to set up the SRV and TXT records for this cluster.

The SRV record points to the server or servers that will comprise the members of the replica set. The TXT record defines the options for the replica set, specifically the database that will be used for authorization and the name of the replica set. It is important to note that the mongodb+srv format URI implicitly adds “ssl=true”. In our case SSL is not used for the demo so we have to append “&ssl=false” to the client connector. Note that the SRV record is specifically designed to look up the mongodb service referenced at the start of the URL.

The settings in AWS Route 53 are: 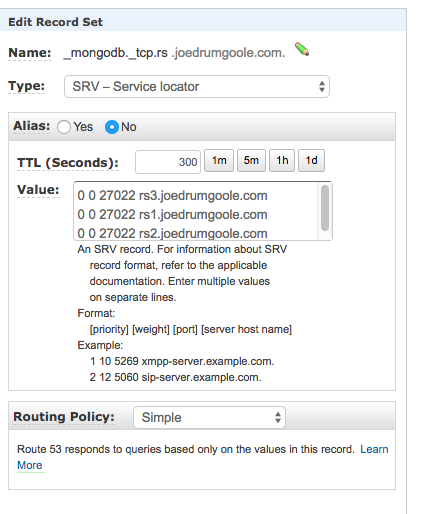 Which leads to the following entry in the zone file for Route 53.

We can do this on AWS Route 53 as follows: 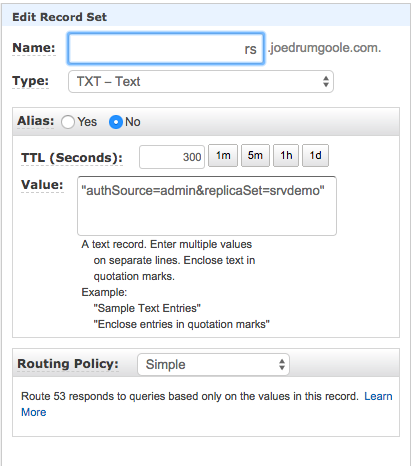 This will create the following TXT record.

This will retrieve a complete URL and connection string which can then be used to contact the service.

The whole process is outlined below: 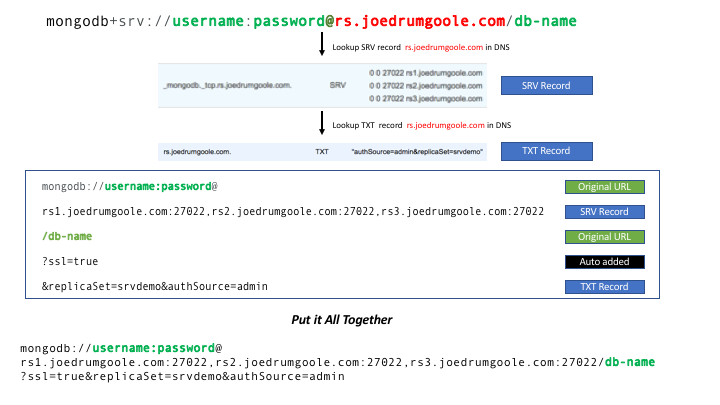 Once your records are set up, you can easily change port numbers without impacting clients and also add and remove cluster members.

SRV records are another way in which MongoDB is making life easier for database developers everywhere.

You should also check out full documentation on SRV and TXT records in MongoDB 3.6.

You can sign up for a free MongoDB Atlas tier which is suitable for single user use.

Find out how to use your favorite programming language with MongoDB via our MongoDB drivers.

Please visit MongoDB University for free online training in all aspects of MongoDB.