Meteor provides a complete open source platform for building web and mobile apps in pure JavaScript. The Meteor team chose MongoDB as its datastore for its performance, scalability, and rich features for JSON. Meteor apps run using JavaScript via Node.JS on the server and JavaScript in the phone’s browser. You write both the client and the server sides of your application in JavaScript using the Meteor.JS framework.

What’s so great about Meteor? Here’s a few things that are particularly interesting to MongoDB developers:

The Database Everywhere and Latency Compensation concepts are especially interesting. Meteor maintains a local copy of data by implementing its own miniMongo database in phone memory. All of the phone-to-server data communication and synchronization is provided by Meteor. miniMongo is a JavaScript implementation of the MongoDB API. 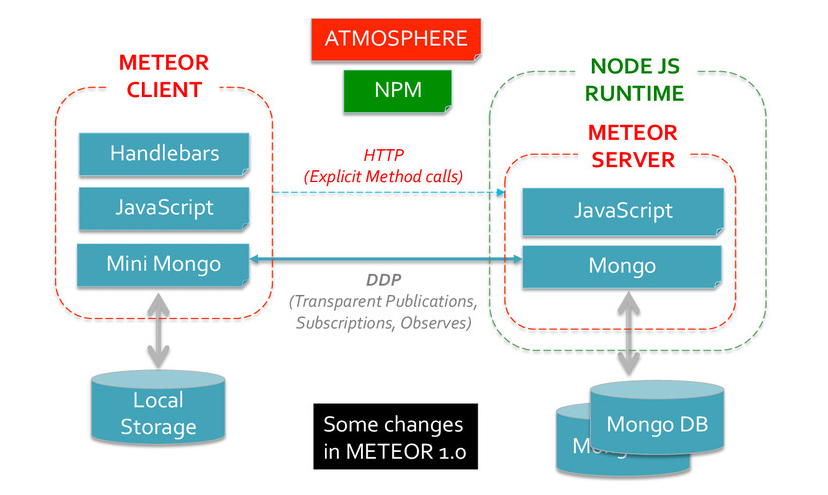 To show you the amazing simplicity of Meteor, let me show you the implementation of a barebones app that does this on a phone:

This HTML presents the page: 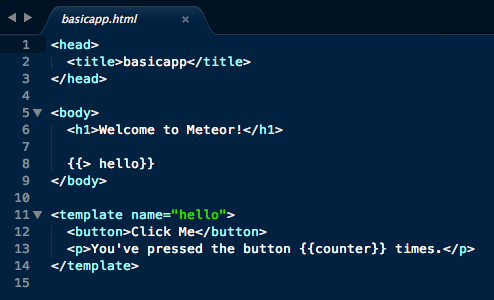 Meteor Blaze is a powerful library for creating live-updating user interfaces. The Blaze UI responds to messages from objects inside the <template> object. Blaze replaces {{counter}} with the value of the counter value in the JavaScript section. Intelligent “reactivity” will update the counter variable as it changes.

Now for the JavaScript. Note how the client and server code reside in a single file: 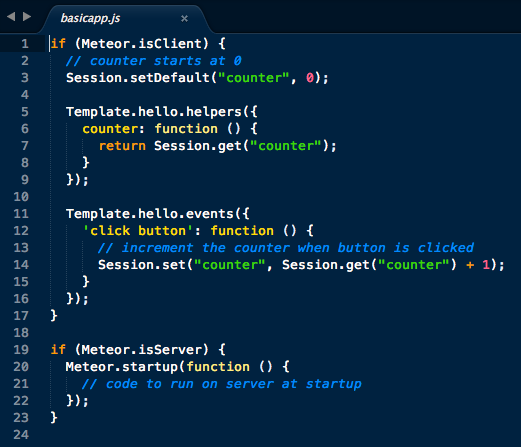 Blaze replaces frameworks such as Angular, Backbone, Ember, React or Knockout. Blaze updates HTML templates automatically without directives, model classes, data dependency declarations, or rendering functions. Blaze infers the data dependency of arbitrary JavaScript, sets up callbacks to detect changes in the template’s data sources, recompute values, and changes the DOM in place with the update. Meteor calls this feature “reactivity.” You just write simple HTML with variable names enclosed in double brackets as we did with {{counter}} in the HTML above.

Blaze lets you create rich phone user interfaces as in these screens from the Verso app built with Meteor and MongoDB: 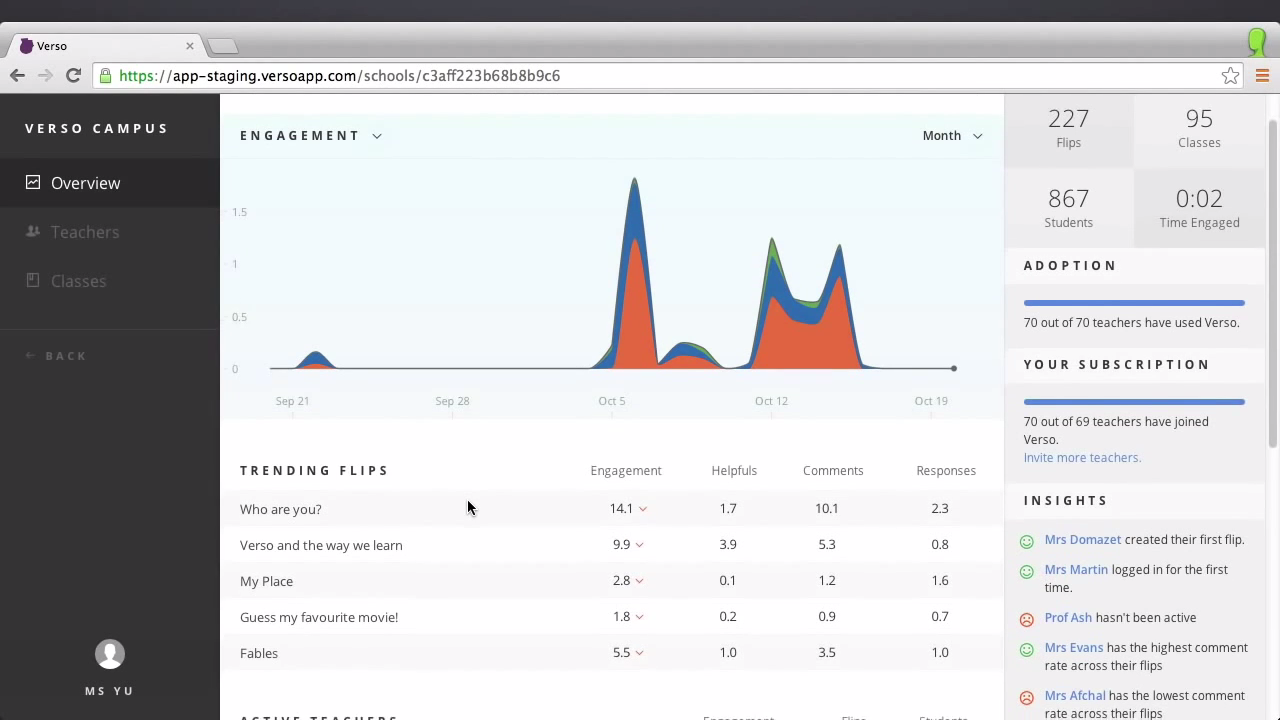 You can install and use Meteor for free. That link has excellent step by step tutorial showing you how to create a simple “todo” app that uses MongoDB for the datastore. At the end of the tutorial you can install a more elaborate sample todo app or a more complex customer engagement app that shows off native phone hardware functionality and social features. Meteor even provides a free server sandbox to deploy and test your apps.

What Storage Engine Should my Backups Use?

What is WiredTiger? What is MMAPv1? WiredTiger is MongoDB’s new storage engine. It is available as an option for all 64-bit MongoDB 3.0 and higher builds. Among other features, it supports document-level locking and compression on disk. Check out MongoDB’s docs on WiredTiger for more information. MMAPv1 is MongoDB’s traditional memory-mapped files storage engine. In MongoDB 3.0 we added collection-level locking while remaining compatible with the on-disk storage of MongoDB 2.6 and older. Why you should match Matching your currently running storage engine to your backed-up engine is critical to easy restores. If your restore files are in a different format than what you are used to running, you will have to make certain that you set your command line options correctly, and differently from what you are running elsewhere. Where to change your setting First, you have to be running the new MMS. MMS Classic customers cannot change their backup format, and only have MMAPv1 backups available to them. You are running the new MMS if the upper-left of your MMS window looks like this: Once you are in the new MMS, you can change your backup format by going to the “Backup” tab, click the “&hellip;” for your replica set or cluster and choose “Edit Storage Engine” Once there, you can choose MMAPv1 (“MongoDB Memory Mapped Files”) or WiredTiger: Once you make this change, an initial sync will be triggered. Choose the server you want to sync from and confirm. An initial sync is required so we can build your new backup. This will not change your existing snapshot formats, so if you request an older restore, it will still be in MMAPv1. You can tell if a snapshot is in WiredTiger format by looking at the “Mongod Version” column on your snapshots listing page (just click on a replica set name on your Backup tab). If the version has “(wiredTiger)” after it, the snapshot is in WiredTiger format. You can see I converted this replica set to WiredTiger:

Erin McNulty, a rising senior at Columbia University, is working as a software engineering intern in MongoDB’s New York City office. After interning at MongoDB during the summer of 2021, Erin returned this year to take on a new challenge on a new team — and a new programming language. Read on for more about Erin’s experience and how MongoDB’s engineering culture has enabled her to grow. Sammy Attia: Welcome back, Erin! I know this is your second summer internship at MongoDB. Can you share a bit about why you decided to join MongoDB in the first place and why you decided to come back? MongoDB intern Erin McNulty Erin McNulty: The first time I chose MongoDB, it was because throughout my interview process, I could tell that MongoDB really valued interns’ growth, so I felt like spending my summer here would be a really good investment. I knew that at MongoDB, I would have a meaningful project that truly helped me grow and would make an impact at the company. I also really enjoy the culture of the New York City technology scene, so I was really excited to receive an offer from a company that was created and headquartered in NYC. When I was deciding to come back to MongoDB the second time, I really prioritized working at a place that would let me explore different types of software engineering because I wanted to make the switch from web programming to systems programming. I knew that MongoDB’s supportive, learning-oriented environment would allow me to take that risk of trying something new. In addition, I have become really interested in database technology and took a few classes during my junior year, so I wanted to put that knowledge to use on the server team. It’s great to hear that you are able to explore different types of programming as a MongoDB intern. What does the service architecture team do? My team is responsible for building the “glue” that holds different components of the MongoDB server together. We build internal APIs that simplify intra- and inter-process communication within MongoDB deployments. In practice, this looks like building a lot of libraries that make networking, asynchronous programming, and remote command execution simple for replication, sharding, and other server teams to use. I have really enjoyed working on this team, because our job is basically to write clean, reusable code that makes other developers’ lives easier. I find it really satisfying to refactor messy, one-off pieces of code to use our libraries instead. Considering that you’re a two-time intern, what is your favorite part about MongoDB’s internship program? Interns are given a lot of trust at MongoDB, which allows us to not only learn technical skills, but also develop our working styles and take risks during the internship. As the summer has progressed, I have been given more and more trust in terms of designing my own solutions to issues without obvious solutions. Even if I make a decision that might not be the best way to solve the problem, I am given the space to discover and correct that on my own. Because of this, I feel like the MongoDB internship program has helped me grow as an engineer who is responsible for design and execution, not just as somebody who writes code that I am told to write. In addition, the internship has allowed me to explore different aspects of MongoDB through reading documentation from other teams. I’ve also had the opportunity to have coffee chats with other engineers and look through the codebase overall. This makes me feel like I am really valued as a growing engineer, rather than just somebody who is around to do some extra work for the summer. It sounds as though you’re really enjoying our strong engineering culture and are taking advantage of the resources we provide to interns at MongoDB. Could you speak a little more about the overall culture? The first thing that comes to mind when thinking about MongoDB’s culture is collaboration. Curiosity and intellectual humility are cornerstones of our engineering culture, and that leads to really productive engineering. When discussing technical decisions within my team, it is very common to hear, “I thought X, but after listening to you walk through your thinking, I am leaning toward Y.” The culture makes it feel like everyone can contribute, and that every idea is worth hearing because it will be given a fair shot. I also really like the intellectual curiosity of MongoDB engineers. It seems that everyone has a little side interest in another team’s work, and you frequently hear engineers ask each other questions about the inner workings of their projects. It seems that you've really embraced one of our most important company values, "build together." Do you have any advice for students who might be considering interning at MongoDB? I would encourage students considering a MongoDB internship to try new things when choosing their teams for the summer. The first summer I was here, I wanted to stick with what I knew by working on a team that used React and Java. This summer, I had to learn an entirely new language, C++, in order to work on my team, and I think that I have grown so much through this experience of trying something new in my internship. Interested in opportunities for college students at MongoDB? Find out more .