This is the third in a three part blog series looking at the aggregation enhancements being introduced in MongoDB 3.2 (most notably $lookup which implements left-outer joins).

The second post stepped through examples of how to use these new features.

This third and final post shows how geolocation data can be included as well as what to do when you reach the limit of what can be done using a single pipeline – including adding wrapper code. This post also summarizes some of the limitations of the Aggregation Framework pipeline and reasons why you might consider a full visualization solution such as Tableau together with the MongoDB Connector for BI (also new in MongoDB 3.2).

MongoDB's product plans are for informational purposes only. MongoDB's plans may change and you should not rely on them for delivery of a specific feature at a specific time.

Adding Some Coding Glue and Geolocation

Obviously, there are limits as to how much can be achieved with a single aggregation pipeline but with the addition of just a little code outside of the database (in this example, JavaScript in the mongo shell), additional results can be produced.

As a reminder, this is the structure of our starting data set:

These data sets (the homeSales and postcodes collections) can be downloaded here.

We start by repeating an aggregation from the previous post but store the data in a collection so that we can build upon those results:

In this example, geospatial operations are performed on the location from the postcodes collection and so a geospatial index should be added:

A function is created that, given a location, will find the five nearest postcodes – taking advantage of a $geoNear stage – note that this must be the first stage in the pipeline:

Then, for each of the hottestLocations collection, that function is called to display and the contents of the returned cursor are displayed:

The result is a list of the 5 closest postcodes to the top selling home each year:

Bonus Query – For Those Choosing a School

There's often a correlation between the house prices near a school and that school's performance. So, if you were considering a specific school then it might make sense to check house prices in the area surrounding that school.

As seen, it’s possible to build up sophisticated analytical queries using the enhanced aggregation features – especially when pipelines are combined with a little application or scripting glue.

Some limitations that you may meet include:

When to Use Full Data Visualization Solutions

A lot can be achieved directly in the database – especially when augmented with a small amount of code. So when would it make sense to use a BI visualization tool such as Tableau. The capabilities will vary from product to product but some general considerations are given here: 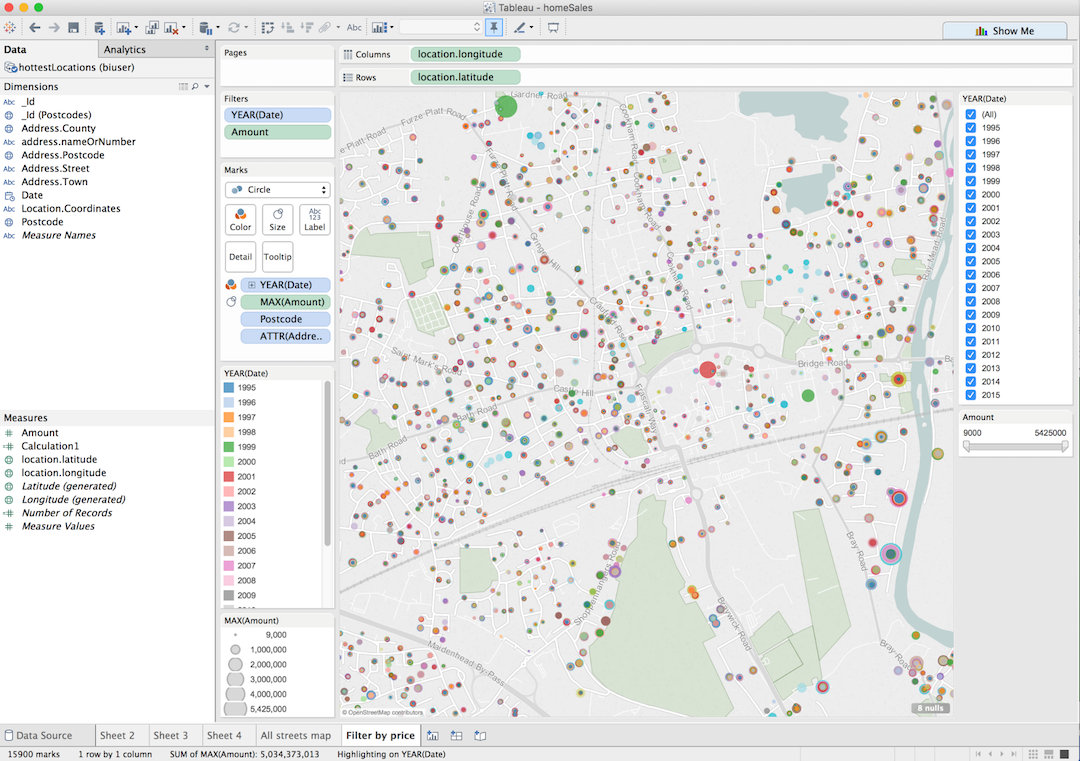 MongoDB 3.2 introduces the MongoDB Connector for BI which allows Business Intelligence tools such as Tableau to access data from MongoDB using SQL – opening up a range of new options for performing analytics on live data.

To get the best understanding of the new features then you should experiment with the software which is available in the MongoDB 3.2 (not for production) download – to use the new $lookup aggregation theMongoDB Enterprise Advanced download should be used.

The reason MongoDB releases development releases is to give the community a chance to try out the new software – and we hope that you'll give us feedback, whether it be by joining the MongoDB 3.2 bug hunt or commenting on this post.

Andrew is a Principal Product Marketing Manager working for MongoDB. He joined at the start of this summer from Oracle where he’d spent 6+ years in product management, focussed on High Availability. He can be contacted @andrewmorgan or through comments on his blog (clusterdb.com).

Today we announced the release of MongoDB 3.2, the first since I declared a new era of maturity for our product with 3.0. This release continues to make the case for MongoDB as the default database for an organization, by meeting the needs of more mission critical use cases, and by meeting the needs of more roles within an organization. MongoDB 3.2 is a giant release, and you can read the release notes to see the full list of new features. I’m proud of each feature individually, but moreover, I’m proud of how MongoDB’s engineering team continues to increase its bandwidth. When we were starting out, we had to round-robin between development domains, focusing in turn on whatever was the highest priority, whether it was improving performance, extending the query language, building out our scaling features, or enhancing operational ease. This release demonstrates how our team is firing on all cylinders, able to make progress on many fronts at once. Let’s take a tour... We continued to push the boundaries of the document database model with features like document validation and partial indexes . We introduced huge new components, like the in-memory and encrypted storage engines, and the BI connector. We made infrastructure improvements, such as config servers as replica sets; under-the-hood improvements, such as replacing the JavaScript engine (more on that in another post); and we continued to refine our tools, giving mongodump and mongorestore the ability to compress, pipe, and stream data over a network. The work we’ve done on our core feature set, including an enormous expansion of our aggregation framework and improvements to geo and text indexing, would alone have been a significant release in previous years, but this year we did them alongside the above. We also put significant effort into housekeeping, bringing consistency in CRUD semantics between the new API and the shell, and we added fit and finish, such as optional case and diacritic sensitivity in text search. In Ops Manager land, we added file system backups as an option, a new query profiler, index suggestions, and the ability to do a rolling index build across a replica set.. Huge new features, brand new tools, performance tuning, edge cases filed smooth, and some tidying up -- we did it all this year. And we’re still just getting started. Learn more about MongoDB 3.2, register for our upcoming webinar: Find out what's new Additional Resources Visit the 3.2 information page Download the ‘What’s New in MongoDB 3.2’ white paper Participate in the MongoDB 3.2 Bug Hunt Hear more from Beta users on MongoDB 3.2 Read the release notes for MongoDB 3.2 About the Author - Eliot Horowitz Eliot Horowitz is CTO and Co-Founder of MongoDB. Eliot is one of the core MongoDB kernel committers. Previously, he was Co-Founder and CTO of ShopWiki. Eliot developed the crawling and data extraction algorithm that is the core of its innovative technology. He has quickly become one of Silicon Alley's up and coming entrepreneurs and was selected as one of BusinessWeek's Top 25 Entrepreneurs Under Age 25 nationwide in 2006. Earlier, Eliot was a software developer in the R&D group at DoubleClick (acquired by Google for $3.1 billion). Eliot received a BS in Computer Science from Brown University.