MongoDB 4.2 announced the alpha release of a containerized version of Ops Manager in a Docker Container for use with the MongoDB Enterprise Kubernetes Operator. This feature is now in Beta testing and will soon be ready for production environments.

Forget about “new year, new you.” How about “new year, newly enhanced Ops Manager functionality!” As we all know, MongoDB Ops Manager is an enterprise application created to manage, backup and monitor MongoDB deployments. It provides multiple features which make running MongoDB in production easy such as scaling and upgrading of MongoDB, query optimization, point-in-time restores, performance alerts, and more. While Ops Manager makes managing MongoDB clusters extremely easy, the process of managing Ops Manager itself involves configuring, deploying, scaling, upgrading and maintaining Ops Manager instances, along with its underlying database. In response to the high demand of feedback to simplify the management of Ops Manager, we’re excited to share that you can now run Ops Manager as a container in Kubernetes, a container orchestration platform. 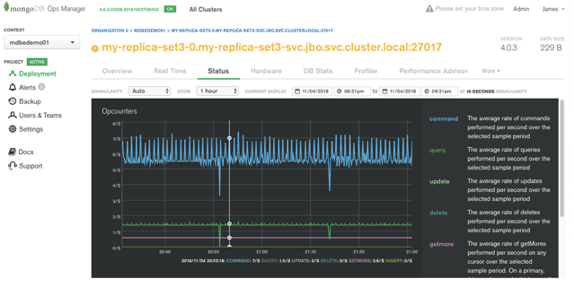 The internal architecture of containerized Ops Manager was completely reworked and dramatically simplified since the alpha release. While being quite robust, it still needs some additional features and fixes which will allow it to be promoted to GA such as pod template support, memory configuration for both pod and Ops manager application, and TLS support for application database and Ops Manager.

Upon Ops Manager containerization being promoted to GA, we’ll be sharing more information on all things Ops Manager and Kubernetes related. Some resources we will share include:

Stay tuned for GA release and the accompanying resources to make the most of your revamped Ops Manager experience.

If you want to learn more about MongoDB Ops Manager in Kubernetes, have a look at our two-part tutorial:

Discover how to react to changes in your MongoDB database using change streams implemented in Node.js and Atlas triggers.