Building and managing applications with MongoDB Atlas on Google Cloud is about to become even easier. That's because we are pleased to announce an expanded technical and business partnership with Google which will bring MongoDB Atlas into the Google Cloud Console.

As this change is deployed, customers will be able to provision, run, and scale their fully managed MongoDB clusters from the same user interface used to manage native GCP services. In other words, the experience of using Atlas on Google Cloud Platform will be similar to that of using Google’s native cloud services, with out-of-the-box integrations to Google StackDriver and Cloud IAM to start, and many more GCP service integrations such as GKE and Cloud Machine Learning Engine to follow. The integration will include unified billing — i.e., customers will receive one invoice from Google Cloud that includes their Atlas usage.

Finally, Atlas will also be made available as an offering on the GCP Marketplace, allowing customers to leverage their existing financial commitments to Google Cloud to cover their Atlas usage.

The deeper integration between Atlas and GCP elevates the user experience for joint customers and makes it frictionless to use the leading database for modern applications with the cloud service ecosystem driving the latest innovations in Kubernetes and AI/ML.

MongoDB Atlas, the fully managed global cloud database, is the best way to deploy, run, and scale MongoDB on the Google Cloud. Developed and run by the same engineering team that delivers the latest MongoDB database packages, Atlas automates time-consuming administration tasks such as deployment, configuration changes, and maintenance while providing best-in-class monitoring, data recovery, security, and performance optimization features out of the box.

Customers like Spoke, which provides a Google AI-powered chatbot to customers, migrated to MongoDB Atlas on GCP in 15 minutes, with zero impact to their application. Thanks to richer metrics and automated performance optimization suggestions, the team is already seeing a significant increase in productivity, with more time to focus on developing Spoke’s core features rather than performing database operations and management tasks.

“We used to spend eight engineering hours once a week or so trying to figure out what was going on, and that doesn't exist anymore.” : Roopak Venkatakrishnan, Software Engineer, Spoke 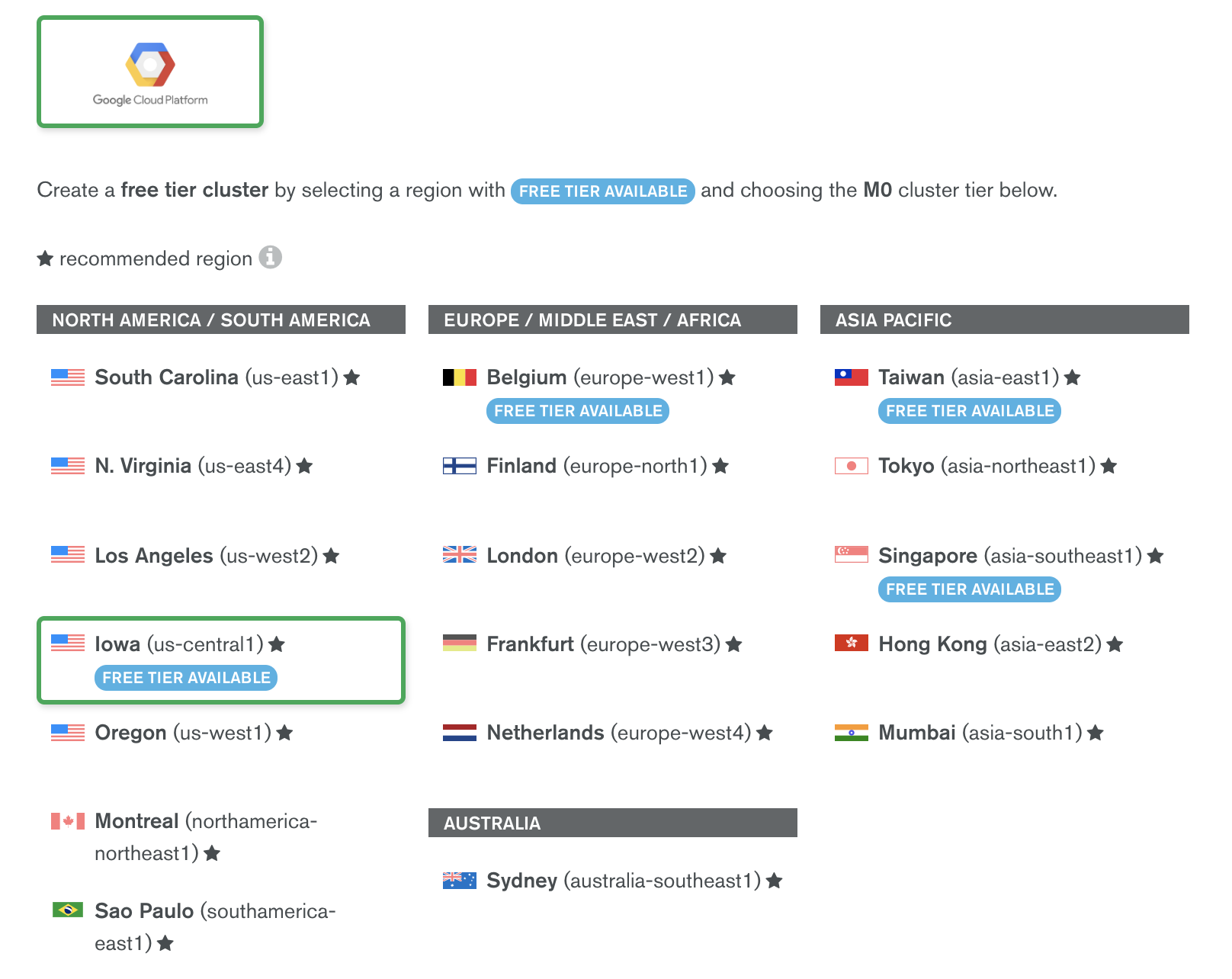 Atlas allows you to deploy clusters across 18 GCP regions in minutes.

The new experience for Atlas on GCP will be available for joint customers beginning with the GCP marketplace integration this summer — stay tuned! If you’d rather not wait, you can create a free account and deploy a cluster on GCP in minutes.

Countdown to MongoDB World 2019: T-10 Weeks - The Hackathon and The First Sneak Peeks

With ten weeks to go before we open the doors at MongoDB World, we wanted to give you a taste of what's going to be going on in some of the tracks. First, a quick reminder of when and where - the conference is running for three days, June 17th to the 19th, at the Hilton Midtown in New York City. Make sure you have that marked in your diary while we tell you about the Hackathon and what's going on at the conference.

Modernize your GraphQL APIs with MongoDB Atlas and AWS AppSync

Modern applications typically need data from a variety of data sources, which are frequently backed by different databases and fronted by a multitude of REST APIs. Consolidating the data into a single coherent API presents a significant challenge for application developers. GraphQL emerged as a leading data query and manipulation language to simplify consolidating various APIs. GraphQL provides a complete and understandable description of the data in your API, giving clients the power to ask for exactly what they need — while making it easier to evolve APIs over time. It complements popular development stacks like MEAN and MERN , aggregating data from multiple origins into a single source that applications can then easily interact with. MongoDB Atlas: A modern developer data platform MongoDB Atlas is a modern developer data platform with a fully managed cloud database at its core. It provides rich features like native time series collections, geospatial data, multi-level indexing, search, isolated workloads, and many more — all built on top of the flexible MongoDB document data model. MongoDB Atlas App Services help developers build apps, integrate services, and connect to their data by reducing operational overhead through features such as hosted Data API and GraphQL API. The Atlas Data API allows developers to easily integrate Atlas data into their cloud apps and services over HTTPS with a flexible, REST-like API layer. The Atlas GraphQL API lets developers access Atlas data from any standard GraphQL client with an API that generates based on your data’s schema. AWS AppSync: Serverless GrapghQL and pub/sub APIs AWS AppSync is an AWS managed service that allows developers to build GraphQL and Pub/Sub APIs. With AWS AppSync, developers can create APIs that access data from one or many sources and enable real-time interactions in their applications. The resulting APIs are serverless, automatically scale to meet the throughput and latency requirements of the most demanding applications, and charge only for requests to the API and by real-time messages delivered. Exposing your MongoDB Data over a scalable GraphQL API with AWS AppSync Together, AWS AppSync and MongoDB Atlas help developers create GraphQL APIs by integrating multiple REST APIs and data sources on AWS. This gives frontend developers a single GraphQL API data source to drive their applications. Compared to REST APIs, developers get flexibility in defining the structure of the data while reducing the payload size by bringing only the attributes that are required. Additionally, developers are able to take advantage of other AWS services such as Amazon Cognito, AWS Amplify, Amazon API Gateway, and AWS Lambda when building modern applications. This allows for a severless end-to-end architecture, which is backed by MongoDB Atlas serverless instances and available in pay-as-you-go mode from the AWS Marketplace . Paths to integration AWS AppSync uses data sources and resolvers to translate GraphQL requests and to retrieve data; for example, users can fetch MongoDB Atlas data using AppSync Direct Lambda Resolvers. Below, we explore two approaches to implementing Lambda Resolvers: using the Atlas Data API or connecting directly via MongoDB drivers . Using the Atlas Data API in a Direct Lambda Resolver With this approach, developers leverage the pre-created Atlas Data API when building a Direct Lambda Resolver. This ready-made API acts as a data source in the resolver, and supports popular authentication mechanisms based on API Keys, JWT, or email-password. This enables seamless integration with Amazon Cognito to manage customer identity and access. The Atlas Data API lets you read and write data in Atlas using standard HTTPS requests and comes with managed networking and connections, replacing your typical app server. Any runtime capable of making HTTPS calls is compatible with the API. Figure 1: &nbsp; Architecture details of Direct Lambda Resolver with Data API Figure 1 shows how AWS AppSync leverages the AWS Lambda Direct Resolver to connect to the MongoDB Atlas Data API. The Atlas Data API then interacts with your Atlas Cluster to retrieve and store the data. MongoDB driver-based Direct Lambda Resolver With this option, the Lambda Resolver connects to MongoDB Atlas directly via drivers , which are available in multiple programming languages and provide idiomatic access to MongoDB. MongoDB drivers support a rich set of functionality and options , including the MongoDB Query Language, write and read concerns, and more. Figure 2: &nbsp; Details the architecture of Direct Lambda Resolvers through native MongoDB drivers Figure 2 shows how the AWS AppSync endpoint leverages Lambda Resolvers to connect to MongoDB Atlas. The Lambda function uses a MongoDB driver to make a direct connection to the Atlas cluster, and to retrieve and store data. The table below summarizes the different resolver implementation approaches. Table 1: &nbsp; Feature comparison of resolver implementations Setup Atlas Cluster Set up a free cluster in MongoDB Atlas. Configure the database for network security and access. Set up the Data API. Secrect Manager Create the AWS Secret Manager to securely store database credentials. Lambda Function Create Lambda functions with the MongoDB Data APIs or MongoDB drivers as shown in this Github tutorial . AWS AppSync setup Set up AWS Appsync to configure the data source and query. Test API Test the AWS AppSync APIs using the AWS Console or Postman . Figure 3: &nbsp; Test results for the AWS AppSync query Conclusion To learn more, refer to the AppSync Atlas Integration GitHub repository for step-by-step instructions and sample code. This solution can be extended to AWS Amplify for building mobile applications. For further information, please contact partners@mongodb.com .