In the beginning Kristina created the MongoDB PHP driver. Now the PECL mongo extension was new and untested, write operations tended to be fire-and-forget, and Boolean parameters made more sense than $options arrays. And Kristina said, "Let there be MongoCollection," and there was basic functionality.

Since the PHP driver first appeared on the scene, MongoDB has gone through many changes. Replica sets and sharding arrived early on, but things like the aggregation framework and command cursors were little more than a twinkle in Eliot's eye at the time. The early drivers were designed with many assumptions in mind: write operations and commands were very different; the largest replica set would have no more than a dozen nodes; cursors were only returned by basic queries. In 2015, we know that these assumptions no longer hold true.

Beyond MongoDB's features, our ecosystem has also changed. When the PHP driver, a C extension, was first implemented, there wasn't yet a C driver that we could utilize. Therefore, the 1.x PHP driver contains its own BSON and connection management C libraries. HHVM, an alternative PHP runtime with its own C++ extension API, also did not exist years ago, nor was PHP 7.0 on the horizon. Lastly, methods of packaging and distributing libraries have changed. Composer has superseded PEAR as the de facto standard for PHP libaries and support for extensions (currently handled by PECL) is forthcoming.

During the spring of 2014, we worked with a team of students from Facebook's Open Academy program to prototype an HHVM driver modeled after the 1.x API. The purpose of that project was twofold: research HHVM's extension API and determine the feasibility of building a driver atop libmongoc (our then new C driver) and libbson. Although the final result was not feature complete, the project was a valuable learning experience. The C driver proved quite up to the task, and HNI, which allows an HHVM extension to be written with a combination of PHP and C++, highlighted critical areas of the driver for which we'd want to use C.

This all leads up to the question of how best to support PHP 5.x, HHVM, and PHP 7.0 with our next-generation driver. Maintaining three disparate, monolithic extensions is not sustainable. We also cannot eschew the extension layer for a pure PHP library, like mongofill, without sacrificing performance. Thankfully, we can compromise! Here is a look at the architecture for our next-generation PHP driver: 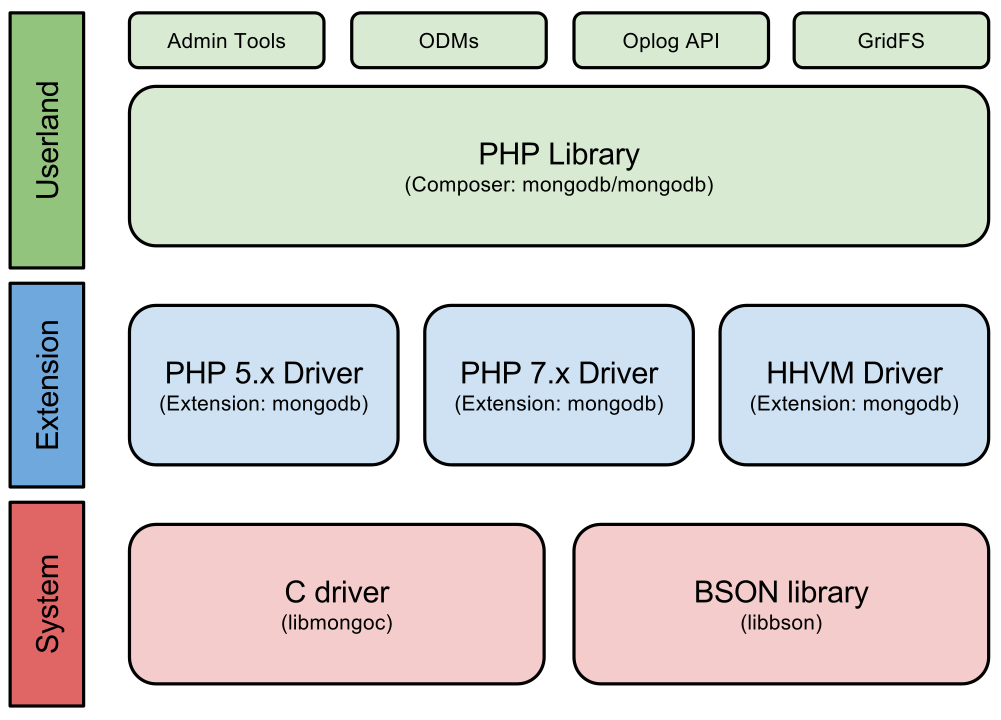 At the top of this stack sits a pure PHP library, which we will distribute as a Composer package. This library will provide an API similar to what users have come to expect from the 1.x driver (e.g. CRUD methods, database and collection objects, command helpers) and we expect it to be a common dependency for most applications built with MongoDB. This library will also implement common specifications, in the interest of improving API consistency across all of the drivers maintained by MongoDB (and hopefully some community drivers, too).

By decoupling the driver internals and a high-level API into extensions and PHP libraries, respectively, we hope to reduce our maintainence burden and allow for faster iteration on new features. As a welcome side effect, this also makes it easier for anyone to contribute to the driver. Additionally, an identical public API for these extensions will make it that much easier to port an application across PHP runtimes, whether the application uses the low-level driver directly or a higher-level PHP library.

GridFS is a great example of why we chose this direction. Although we implemented GridFS in C for our 1.x driver, it is actually quite a high-level specification. Its API is just an abstraction for accessing two collections: files (i.e. metadata) and chunks (i.e. blocks of data). Likewise, all of the syntactic sugar found in the 1.x driver, such as processing uploaded files or exposing GridFS files as PHP streams, can be implemented in pure PHP. Provided we have performant methods for reading from and writing to GridFS' collections – and thanks to our low level extensions, we will – shifting this API to PHP is win-win.

Earlier I mentioned that we expect the PHP library to be a common dependency for most applications, but not all. Some users may prefer to stick to the no-frills API offered by the extensions, or create their own high-level abstraction (akin to Doctrine MongoDB for the 1.x driver), and that's great! Hannes has talked about creating a PHP library geared for MongoDB administration, which provides an API for various user management and ops commands. I'm looking forward to building the next major version of Doctrine MongoDB ODM directly atop the extensions.

While we will continue to maintain and support the 1.x driver and its users for the foreseeable future, we invite everyone to check out our next-generation driver and consider it for any new projects going forward. You can find all of the essential components across GitHub and JIRA:

The existing PHP project in JIRA will remain open for reporting bugs against the 1.x driver, but we would ask that you use the new projects above for anything pertaining to our next-generation drivers.

If you're interested in hearing more about our upcoming PHP and HHVM drivers, Derick Rethans is presenting a new talk entitled One Extension, Two Engines at php[tek] 2015 in May.

About the Author - Jeremy
Jeremy Mikola is a software engineer at MongoDB's NYC office. As a member of the driver and evangelism team, he helps develop the PHP driver and contributes to various OSS projects, such as Doctrine ODM and React PHP. Jeremy lives in Hoboken, NJ and is known to enjoy a good sandwich.

Thanks to everyone who submitted nominations for MongoDB Masters this year! The continued support of our community has propelled MongoDB to become the fastest growing database ecosystem. Today we’re excited to recognize the leaders that have contributed to our vibrant and growing community through the MongoDB Masters program. What is the MongoDB Masters program? MongoDB Masters is an annual program run by MongoDB to recognize and empower leaders in the MongoDB community. Masters serve as ambassadors, leaders, educators, and experts sharing their first-hand knowledge and experience. Masters complete MongoDB professional certification to demonstrate their expertise. The Masters participate in regular q&a sessions with MongoDB engineering, get early access to MongoDB products and services and an invitation to our annual Masters Summit at MongoDB World . What are the criteria for membership this year? Regularly engage with the community, both online and offline Demonstrate expertise in MongoDB, including a willingness to become a certified MongoDB professional Serve as an advocate for MongoDB and the community Provide feedback on new MongoDB releases and MongoDB products Announcing 2015 Masters Without further ado, this year’s MongoDB Masters: Atilla Tozser, Amadeus Beibei Xiao, Baidu Cesar Trigo, Gigigo Charity Majors, Parse/Facebook Dai Shi, Foursquare Doug Garrett, Genentech Flavio Percoco, Red Hat Gustavo Niemeyer, Canonical Jai Hirsch, CARFAX Jared Cottrell, MongoLab Jeff Berger, Sailthru Johannes Brandstetter, comSysto Jongmyun Joo, Plan Information Technology Jorge Puente Sarrín, RebelMouse Katia Aresti, Aresti Development Kenny Gorman, ObjectRocket by Rackspace Kevin Cearns, Entuit Enterprise Solutions Mark Callaghan, Facebook Michael Kennedy, DevelopMentor Michael Poremba, Practice Fusion Nick Martin, Meteor Nicola Iarocci, CIR 2000 Nuri Halperin, N+ Consulting Pedro Pessoa, Server Density Rick Copeland, Synapp.io Robert J Moore, Allan Bank Consulting Russell Smith, Rainforest QA Sigfrido Narvaez, Sage Tom Leach, GameChanger Travis Redman, Parse/Facebook Trisha Gee, Jet Brains William Kennedy, Ardan Studios We look forward to this group’s continued contribution to MongoDB. If you're interesting in using or learning more about MongoDB, you can start by signing up to learn how to use it on university.mongodb.com or visit one of our globally hosted MUGs (MongoDB User Groups) in your area. You can follow this year's MongoDB Masters on Twitter here . Learn MongoDB &nbsp; About the Author - Michael Michael Calvert is the global community manager at MongoDB. Prior to MongoDB he was a founding employee at Disqus as their first community manager. During his 6 years there, he helped drive growth from 13k to over 1.4+ billion monthly unique visitors and was involved in all parts of the business from managing and scaling community, product development, business development with key partners, creating and managing events, and marketing. In his free time he creates video games and has a passion for corgis.