MongoDB Atlas makes it very easy to manage data of healthcare and FHIR applications. MongoDB was included in the press release by the Department of Human and Health Service’s Office of the National Coordinator for Health Information Technology which announced the winner of the “Secure API Server Showdown” challenge.

As a result of this challenge, a unique open source FHIR implementation using JavaScript, Node.js and MongoDB is now available for industry developers to build upon. This implementation meets the security technical requirements as specified in the Argonaut Data Query Implementation Guide Version 1.0.0.

After a vigorous competition, the team at Asymmetrik was awarded winner of the reference implementation of a secure open source FHIR server based on MongoDB. For a deeper dive, the source code is available for developers and architects under the MIT license.

FHIR® (Fast Healthcare Interoperability Resources) is a next-generation standards framework created by HL7 which promises to ease interoperability in the healthcare industry and builds on previous efforts. MongoDB and FHIR both support the JSON format, the de facto standard extensively used in modern application development due to its’ ability to support rich data structures and objects prevalent in healthcare, such as patients, claims, policies, treatments and so on.

MongoDB Atlas is a fully-managed cloud database developed by the same people that build MongoDB. Atlas handles all the complexity of deploying, managing, and healing your MongoDB deployments on the cloud service provider of your choice (AWS, Azure, and GCP). It is built on the notion of security by default, provides always-on encryption at rest, TLS1.1 or higher for encryption in motion, encryption in use, creation of MongoDB clusters in fully isolated VPCs, an always-on Atlas auditing feed, and simple enablement of database-level auditing. For a full list of MongoDB Atlas features, please refer to the documentation.

One of the many reasons Atlas is the database of choice for companies managing healthcare-related data is because of our high compliance standards. Not only is Atlas HIPAA ready, but it’s compliant with GDPR, ISO27001, PCI, and SOC 2 Type II. We don’t compromise on security, and neither should you.

Using MongoDB Atlas is the fastest way to build FHIR applications. A sample illustration of this architecture is shown below.

The MongoDB Atlas customer can further utilize services such as Charts to create personalized dashboards for its users, use Stitch to manage authentication of its FHIR application users, or Atlas Search to allow its users to perform unstructured search queries. If the users of an application store data within their own repositories, a MongoDB Atlas customer can leverage Data Lake to query that data in place upon permission of such application users.

How to create a FHIR application with MongoDB Atlas 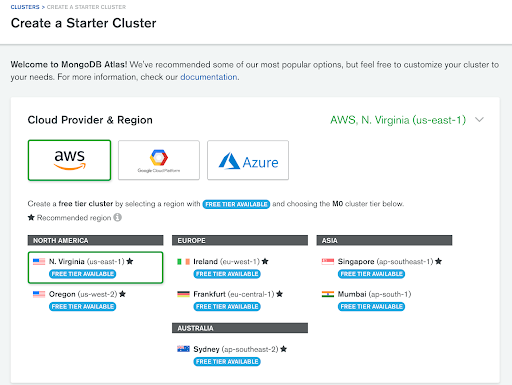 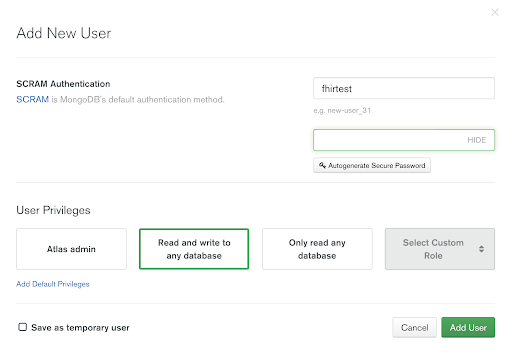 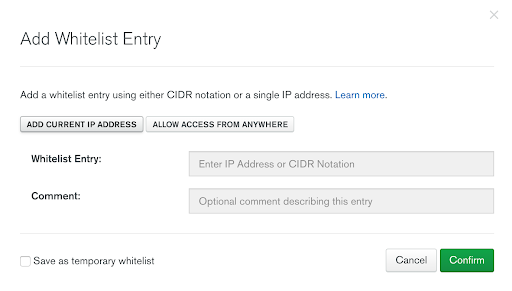 where @createpatient.json is: (COPY PASTE first example from github above)

In this blog post, we described what FHIR is and how easy it is to build FHIR applications with MongoDB Atlas. If you are looking to encrypt certain fields in FHIR data before storing them in MongoDB Atlas, consider using MongoDB’s client-side field level encryption. Also, consider using various authentication providers using MongoDB Stitch for FHIR application user authentication, or even bring FHIR server parsing functionality within MongoDB Stitch Functions.

Try MongoDB in the Cloud

Create a free account and launch a cluster in minutes!

Research: Developers are Trusted By The Business But The Alignment is Not Felt Evenly Across Different Generations

As organisations shift to becoming technology-focused, developers’ roles have evolved so that they are now playing a crucial role in decision making across their businesses. However, all this newfound alignment isn’t so keenly felt across the whole developer workforce.