We’re really interested in delivering a lifestyle experience. It’s not just about cool flashy features in your house. We want really to make your life simpler.

That’s how Nick Brown, Principal Software Architect at Vivint, explained his company’s vision to tech publication Datanami at MongoDB World 2016. Nick was at the event to present on the challenges and triumphs of a high-risk, ultra urgent, ground-breaking Internet of Things implementation his team had created.

Vivint needed a database that would scale to millions of devices, had ultra-low latency response times and was flexible enough that it could allow developers to build quickly and make changes on the fly.

The entire platform had to be created in less than a year to fit in with Vivint’s hardware and sales cycle. So Nick’s team designed and built a brand new integration platform based around MongoDB for this urgent, but complex, project.

The Vivint Sky platform, which has been live for two years, is the interface that gives millions of customers access to Vivint’s suite of smart home devices as well as integrating with other hardware providers. These could include anything from NEST thermostats, connected fridges, smart locks or security cameras – all which can be accessed and controlled from any device via the Sky User Interface.

The platform is now running so smoothly that Vivint has been able to free up its database administrator resources to focus on more strategic responsibilities. They’re not longer burdened with low level operational tasks. As Nick puts it the traditional DBA activity takes about 5% of one person’s time.

It wasn’t all smooth sailing though and Nick’s presentation also covered what happened the first Halloween evening his team faced. It’s not just trick and treaters who are working hard on that night, the massive increase in residential activity results in some interesting problems for the smart home industry too. Nick also covers:

To get more detail on how Vivint built its smart home platform, and to find out exactly what happened on Halloween, check out Nick’s slides from MongoDB World: 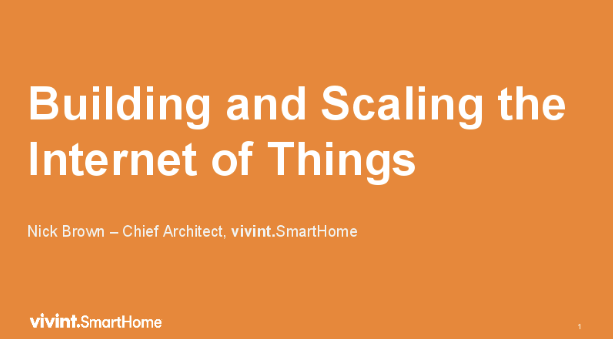 To learn more about the Internet of Things and MongoDB download this free white paper: