We are excited to announce MongoDB World 2015! Join us at the largest gathering of the MongoDB community. This year's event will feature 100+ technical sessions, pre-conference training and certification exams, Birds-of-a-Feather sessions, plenty of networking opportunities, exciting surprises, and a rockin’ after party! It’s all MongoDB, all the time.

Share your MongoDB story at MongoDB World! Submit a talk proposal by January 15.

With 100+ sessions, MongoDB World has something for everyone.

The conference will feature the following [tracks](/lp/event/talk-proposal):

Get a glimpse of what to expect: View MongoDB World 2014 presentations.

We’re opening registration soon. Sign up to stay up to date and get informed as soon as tickets are available. Don’t end up stuck in line! 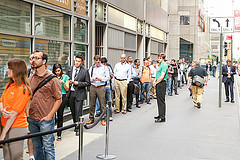 Have a story to tell? Share it at MongoDB World! Submit a talk proposal by January 15.

Want to be front and center in front of 2000+ MongoDB fans? Sponsor MongoDB World

We had tons of fun last year and can’t wait to see you at this year’s MongoDB World! Click here to learn more about the largest MongoDB event to date.