This post looks at a new feature in MongoDB Compass 1.5 (in beta at the time of writing) which allows document validation rules to be added from the GUI rather from the mongo shell command line. This makes it easy to create and modify rules that ensure that all documents written to a collection contain the data you expect to be there.

One of MongoDB’s primary attractions for developers is that it gives them the ability to start application development without first needing to define a formal schema. Operations teams appreciate the fact that they don't need to perform a time-consuming schema upgrade operation every time the developers need to store a different attribute. For business leaders, the application gets launched much faster, and new features can be rolled out more frequently. MongoDB powers agility.

Many projects reach a point where it's necessary to enforce rules on what's being stored in the database – for example, that for any document in a particular collection, you can be certain that specific attributes are present in every document. Reasons for this include:

As an example, an e-commerce website may centralize product catalog feeds from multiple vendors into a single collection. If one of the vendors alters the format of its product catalog, global catalog searches could fail.

To date, this resulted in developers building their own validation logic - either within the application code (possibly multiple times for different applications) or by adding middleware such as Mongoose.

To address the challenges discussed above, while at the same time maintaining the benefits of a dynamic schema, MongoDB 3.2 introduced document validations. Adding and viewing validation rules required understanding the correct commands to run from the mongo shell's command line.

MongoDB Compass 1.5 allows users to view, add, and modify document validation rules through its GUI, making them more accessible to both developers and DBAs.

Document Validation provides significant flexibility to customize which parts of the documents are and are not validated for any collection. For any attribute it might be appropriate to check:

Further, it may be necessary to combine these checks – for example that the document contains the user's name and either their email address or phone number, and if the email address does exist, then it must be correctly formed.

Adding the validation checks from the command line is intuitive to developers or DBAs familiar with the MongoDB query language as it uses the same expression syntax as a find query to search the database. For others, it can be a little intimidating.

As an example, the following snippet adds validations to the contacts collection that validates:

Note that types can be specified using either a number or a string alias.

Wouldn't it be nice to be able to define these rules through a GUI rather than from the command line?

If you don't already have MongoDB Compass 1.5 (or later) installed, download it and start the application. You'll then be asked to provide details on how to connect to your database.

MongoDB Compass is free for evaluation and for use in development, for production, a MongoDB Professional of MongoDB Enterprise Advanced subscription is required.

Note that MongoDB Compass currently only accepts a single server address rather than the list of replica set members in the standard Atlas connect string and so it's necessary to explicitly provide Compass with the address of the current primary – find that by clicking on the cluster in the Atlas GUI (Figure 1). 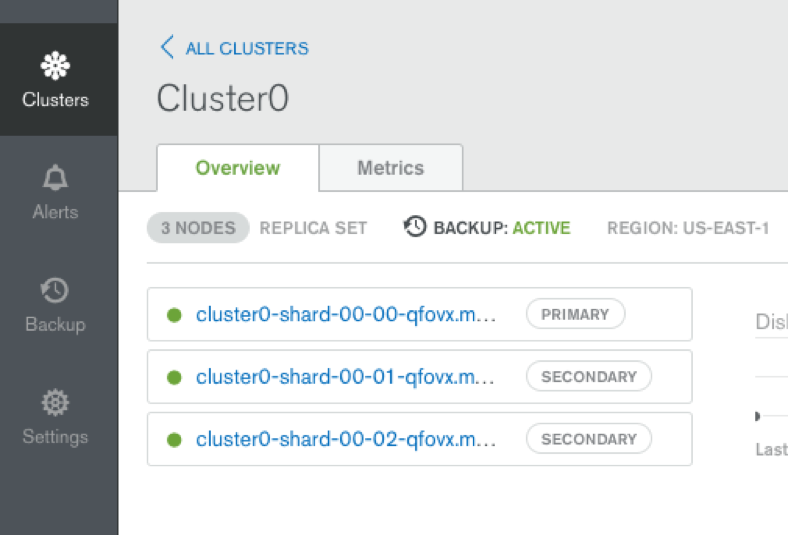 The connection panel can then be populated as shown in Figure 2. 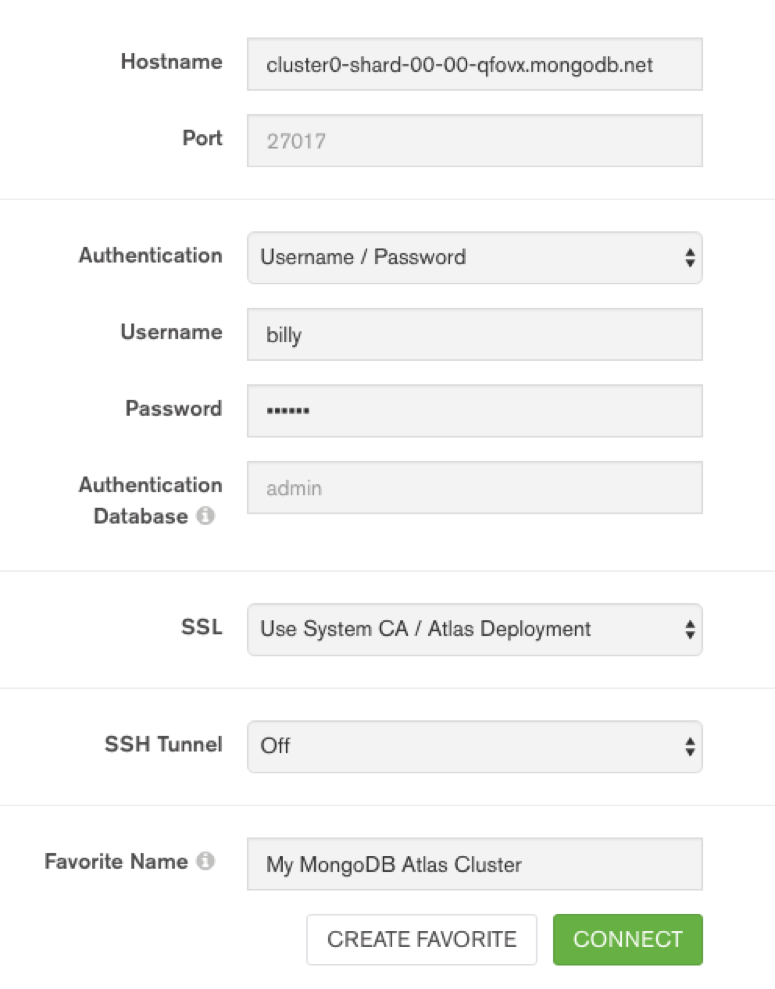 If you don't already have a populated MongoDB collection, create one now. For example, use curl to download a pre-prepared JSON file containing contact data and use <a href="https://docs.mongodb.com/manual/reference/program/mongoimport/" title="Import JSON, CSV, or TSV data into MongoDB">mongoimport</a> to load it into your database: 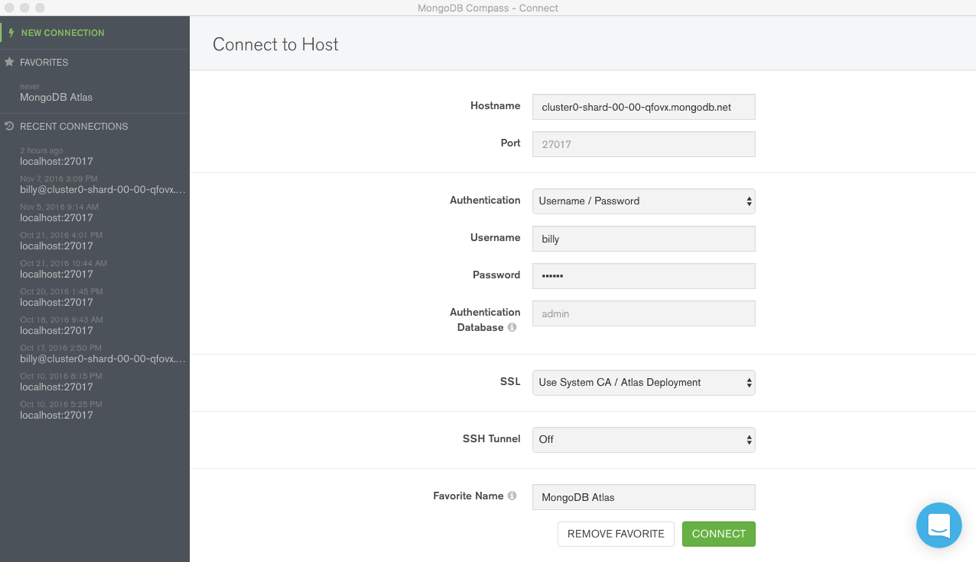 Select the contacts data and browse the schema (Figure 4). 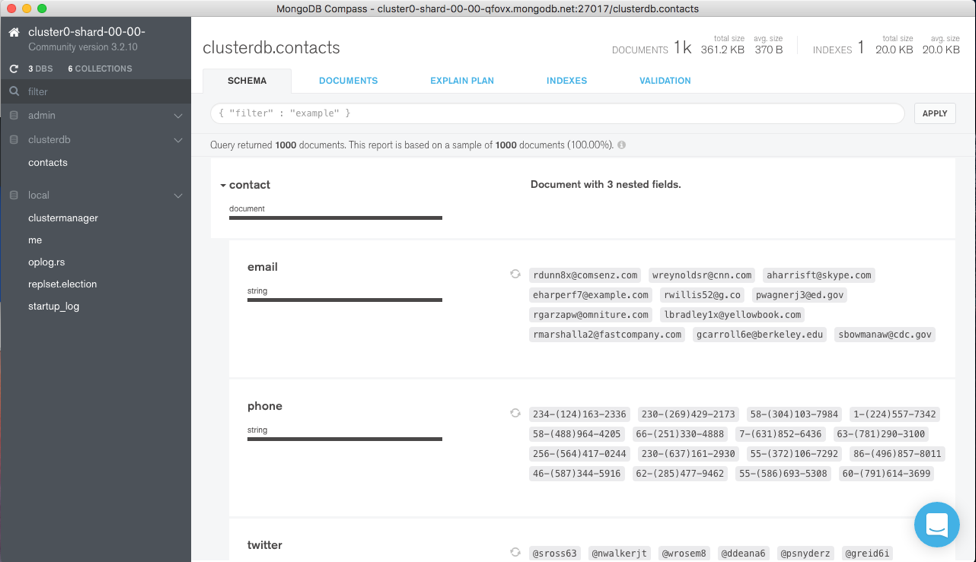 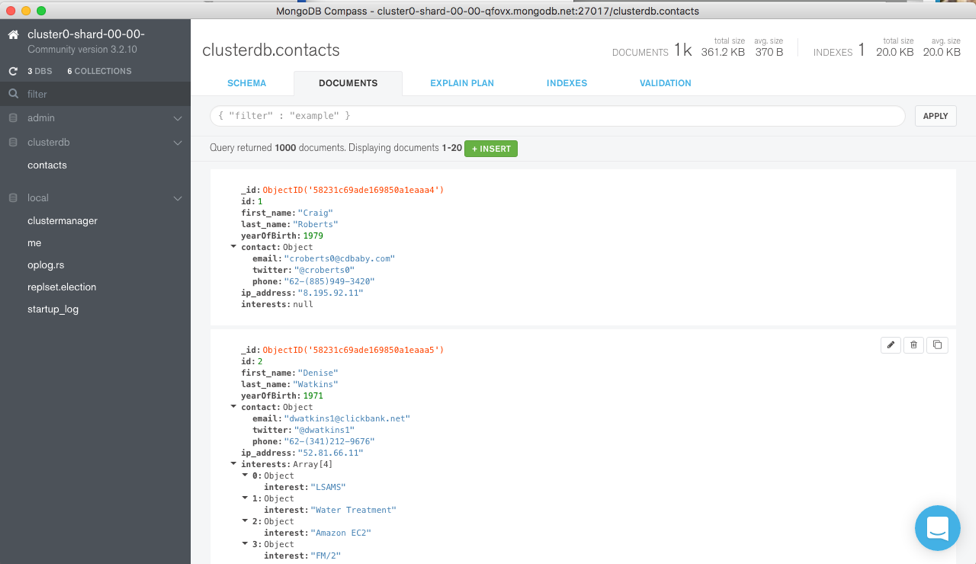 In this section, we build the document validation rule shown earlier.

Navigate to the Validation tab in MongoDB Compass GUI and select the desired validation action and validation level. The effects of these settings are shown in Figure 6. Any warnings generated by the rules are written to the MongoDB log.

When adding document validation rules to an existing collection, you may want to start with fairly permissive rules so that existing applications aren't broken before you have chance to clean things up. Once you're confident that all applications are following the rules you could then become stricter. Figure 7 shows a possible life cycle for a collection.

This post is starting with a new collection and so you can go straight to error/strict as shown in Figure 8.

Clicking UPDATE applies the change and then you can review it by pressing the JSON button (Figure 10).

At this point, a problem appears. Compass has combined the 3 sub-rules with an and relationship but our intent was to test that the document contained either an email address or a phone number and that yearOfBirth was no later than 1994. Fortunately, for these more complex checks, the JSON can be altered directly within Compass:

Paste the refined rule into Compass and press UPDATE (Figure 11).

Recall that this rule checks that the yearOfBirth is no later than 1994 and that there is a phone number (formatted as a string)or a properly formatted email address.

However you write to the database, the document validation rules are applied in the same way – through any of the drivers, or through the mongo shell. For this post we can test the rules directly from the MongoDB Compass GUI, from the DOCUMENTS tab. Select a document and try changing the yearOfBirth to a year later than 1994 as shown in Figure 12.

Find the Offending Documents Already in the Collection

There are a number of ways to track down existing documents that don't meet the new rules. A very simple option is to query the database using the negation of the rule definition by wrapping the validation document in a $nor clause:

The query document can be pasted into the query bar in Compass and then pressing APPLY reveals that there are 206 documents with yearOfBirth greater than 1994 – Figure 13. 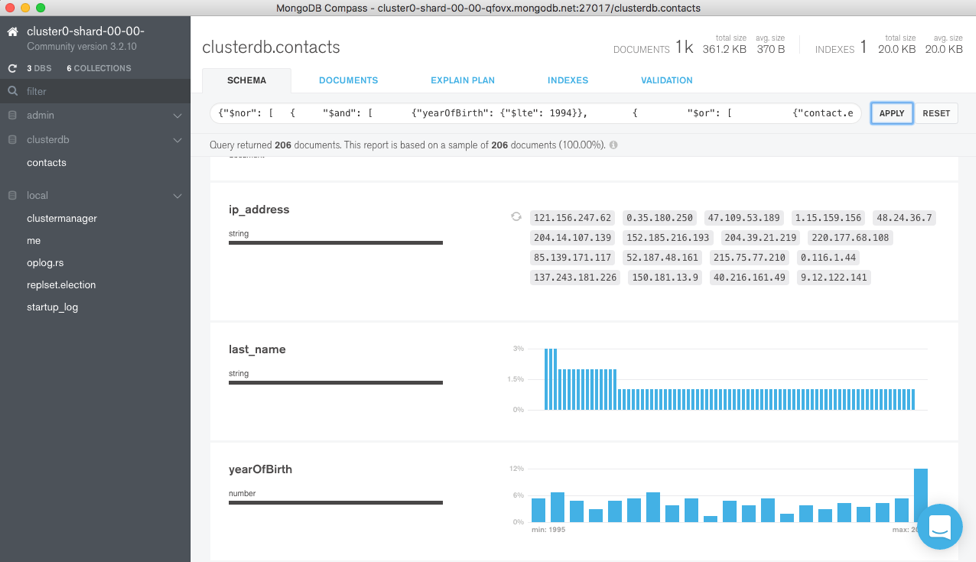 Potentially more problematic is how to clean up the existing documents which do not match the validation rules, as you need to decide what should happen to them. The good news is that the same $nor document used above can be used as a filter when executing your chosen action.

For example, if you decided that the offending documents should not be in the collection at all then this command can be run from the mongo shell command line to delete them:

A tricky problem to solve with RDBMSs is the versioning of data models; with MongoDB it's very straight-forward to set up validations that can cope with different versions of documents, with each version having a different set of checks applied. In the example validation checks below, the following logic is applied:

In this way, multiple versions of documents can exist within the same collection, and the application can lazily up-version them over time. Note that the version attribute is user-defined.

In MongoDB, document validation is simple to set up – especially now that it can be done through the MongoDB Compass GUI. You can avoid the maintenance headache of stored procedures – which for many types of validation would be required in an RDBMS – and because the familiar MongoDB query language is used, there is no new syntax to learn.

The functionality is very flexible and it can enforce constraints on as little or as much of the schema as required. You get the best of both worlds – a dynamic schema for rapidly changing, polymorphic data, with the option to enforce strict validation checks against specific attributes from the onset of your project, or much later on. You can also use the Compass GUI to find and modify individual, pre-existing documents that don't follow any new rules. If you initially have no validations defined, they can still be added later – even once in production, across thousand of servers.

It is always a concern whether adding extra checks will impact the performance of the system; in our tests, document validation adds a negligible overhead.

So, is all Data Validation Now Done in the Database?

The answer is "probably not" – either because there's a limit to what can be done in the database or because there will always be a more appropriate place for some checks. Here are some areas to consider:

In this post, we've taken a look at the powerful document validation functionality that was added back in MongoDB 3.2. We then explored how MongoDB Compass 1.5 adds the convenience of being able to define these rules through an intuitive GUI.

This is just one of the recent enhancements to MongoDB Compass; others include:

A summary of the enhancements added in MongoDB Compass 1.4 & 1.5 can be found here:

Andrew is part of the MongoDB product team, responsible for building the vision, positioning and content for MongoDB’s products and services, including the analysis of market trends and customer requirements. Before joining MongoDB, Andrew was director of product management for MySQL at Oracle – with a particular focus on distributed, highly available databases. Prior to Oracle, Andrew worked in software development for telecoms with a focus on HA, in-memory, real-time databases.

MongoDB 3.4.0-rc4 is out and is ready for testing. This is the culmination of the 3.3.x development series. As with previous major releases, we welcome the Community's involvement in testing our release candidates through our Bug Hunt. We invite you to help us ensure the quality of this release, and we want to give away some great prizes to those who do. You can learn more about how to get involved and the resources available in our blog post: https://www.mongodb.com/blog/post/announcing-the-mongodb-3-4-bug-hunt Users can now get up to speed on upcoming features with the MongoDB 3.4 Online Course: https://university.mongodb.com/courses/M034/about Fixed in this release candidate: SERVER-24596 Deadlock waiting for majority snapshot during map reduce output stage SERVER-24994 Assertion when sharded collection is dropped during metadata changes SERVER-26492 2dsphere geoNear density estimator should stop once it exceeds $maxDistance SERVER-26747 replSetStepDown should wait for last write to commit SERVER-26993 Extend concurrency suite options SERVER-27048 Fix recursive lock issue leading to deadlock or crash in LegacySession SERVER-27053 Possibility to confirm w:majority write that has been rolled back WT-3000 Missing log records in recovery when crashing after a log file switch WT-3017 Hazard pointer race with page replace causes error 3.4 Release Notes | All Issues | Downloads As always, please let us know of any issues. -- The MongoDB Team