We like to think that Google Cloud Platform ​is one of the best places to run high-performance, highly-available database deployments and MongoDB is no exception. In particular, with an array of standard and customizable machine types, blazing fast persistent disks, and a high-performance global network, Compute Engine is a great option for MongoDB deployments, which can then be combined with managed big data services like BigQuery, Cloud Dataproc, and Cloud Dataflow to support all manner of modern data workloads.

There are a number of ways to deploy MongoDB on Google Cloud Platform, including (but not limited to):

Today we’re taking things one step further and introducing updated documentation and Cloud Deployment Manager templates to bootstrap MongoDB deployments using MongoDB Cloud Manager. Using the templates, you can quickly deploy multiple Compute Engine instances, each with an attached persistent SSD, that will download and install the MongoDB Cloud Manager agent on startup. Once the setup process is complete, you can head over to MongoDB Cloud Manager and deploy, upgrade, backup, monitor, and manage your cluster easily from a single interface. 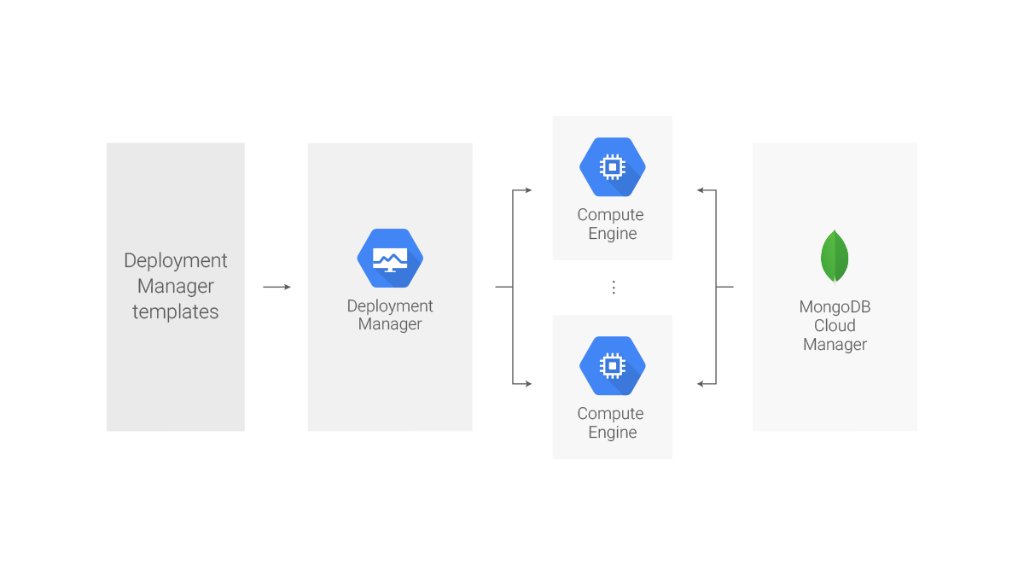 By default, the Deployment Manager templates are set to launch three Compute Engine instances for a replica set, but they could just as easily be updated to launch more instances if you’re interested in deploying a sharded cluster.

Check out the documentation and sample templates to get started deploying MongoDB on Google Cloud Platform. Feedback is welcome and appreciated; comment here, submit a pull request, create an issue, or find me on Twitter @crcsmnky and let me know how I can help.

About the Author - Sandeep Parikh

Sandeep's formal background is in software engineering and he has worked for several companies over the last 15 years, including Apple and MongoDB, as well as several startups. Among others, he has developed reference architectures for complex Big Data deployments and analytical pipelines as well as software systems to analyze social networks, document similarity and text sentiment.

We’re excited to host our fantastic list of keynote speakers for MongoDB World 2016 . In anticipation of this year’s conference we sat down with Terri Virnig, Vice President, Power Systems Software Solutions for IBM. What are some of the challenges facing the largest hardware company in the world today? The market has shifted from buying servers and piece part capabilities to buying solutions which demonstrate clear business value. One specific example is our customers want integrated and optimized hardware / software solutions to deliver on-prem DBaaS to their lines of business. They want something with a fast time to value to support new business applications they're rolling out. We have transformed our business from delivering servers to delivering solutions that support business needs such as this. With the shift to cloud, how do you see IBM continuing to take a leadership position in the market when mainframe and services continue to drive the revenue for the business? IBM is already an industry leader in Hybrid Cloud solutions and will continue to produce Hybrid Cloud solutions that leverage existing IT resources while integrating into newer public and private cloud environments. IBM's Cloud solutions will continue to lead the way in delivering fast, easy and automated access to public, private and hybrid cloud services to help clients digitally transform and securely manage and gain insight into their data no matter where it resides. How does MongoDB fit into IBM's strategy? What would you like to see more of from ISVs like MongoDB that support IBM? The explosive growth of both structured and unstructured data from multiple sources requires businesses to derive insights faster than ever to keep pace and gain new business advantages. Our vision is that the combination of MongoDB, a leader and innovator in the NoSQL database field, along with IBM Power System's Industry leading infrastructure optimized for Cloud, Big Data and Open environments, will deliver a next generation of innovative solutions that will greatly improve client outcomes. In your career, can you share with us how you thought big and created a #giantidea? One of the most innovative things we've delivered this year is our RapidBuild program. This program pairs together ISVs like MongoDB with distributors like Avnet to deliver validated, tested, optimized on-prem DBaaS solutions built as one turn-key package, with a single point of support for hardware and software. This program is a first of a kind in the industry and is focused on giving customers a fast time to value so they can focus on building the applications that drive their businesses. What are you most excited to share at MongoDB World? We're excited to share industry-leading TCO benefits that are the result of a close, collaborative partnership with MongoDB. We've worked closely to drive optimizations for our clients that result in cost savings versus Intel. We'll be talking more about this at MongoDB World! MongoDB World is an opportunity to learn database best practices, network with peers and industry professionals, and advance your career. It is the only event where you’ll hear directly from both the engineers that build MongoDB and the MongoDB users running the largest implementations in the world. Will you be there? Register for MongoDB World 2016