The summer months are an extraordinary time for our NYC headquarters, and not because of the immense heat that infiltrates the surrounding Times Square. Each summer we are joined by college students from all over the country and the world, who have chosen MongoDB as their place to learn.

Allison Chang is a rising senior at Princeton University and a Bay Area local. She joins us this year as one of our 57 #MongoDBSummer17 interns, making the leap cross-country to spend 12 weeks between her junior and senior year with the MongoDB Replication Team at our NYC headquarters. 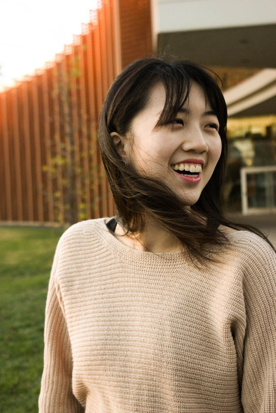 Andrea Dooley: First and foremost, why NYC? I’m sure there were a ton of opportunities close to home in the Bay Area.
Allison Chang: There were, but I grew up in California and wanted to experience something different.

AD: So then what attracted you to MongoDB?
AC: I’ve know about MongoDB since high school – the t-shirts are everywhere in the Valley, so when the campus team reached out, I had a level of familiarity. I also spoke with a friend from Princeton who had interned last year. She had a great experience and really liked how everyone was friendly and helpful.

AD: What ultimately made you want to intern at MongoDB this summer?
AC: I liked that MongoDB was a mid-size private company. I felt that I would be able to interact with people at all levels of the company, which held true. My previous internship was at a much larger company and I felt very disconnected. Here I not only have my mentor, but I am also well acquainted with my technical lead and the Director of Distributed Systems because we all sit in the same row. They're available to answer any questions, and it gives me assurance that what I’m doing is important and the work is meaningful.

AD: You’re on the Replication Team which falls under Distributed Systems. What have you been able to work on so far?
AC: I’m currently working on changing the rollback algorithm for non-WiredTiger storage systems. Right now MongoDB has two major storage engines with different requirements and two different rollback algorithms. Depending on the feature there will be a different algorithm, so I’m working on making the 3.4 algorithm the same for 3.6.

AD: How were you first introduced to computer science? Do you remember your first encounter?
AC: It was a long time ago. I had very early exposure to general computer science and engineering because the middle school I went to offered a half-year robotics class. I remember working with programmable Legos and building robots by leveraging software. I also learned basic HTML and was required to build a website to complete the class.

AD: That’s a really unique program. Since you had such early exposure, have you faced any challenges during your internship?
AC: Adapting to New York and working at MongoDB has been interesting, but mostly it’s been learning how to structure code to be user friendly for people who will use it down the line. In school it’s been more learning code for the course or for myself. Since MongoDB is open-source, and all the server code is public, there are more things to consider about the way in which someone else may use it.

AD: So, what has your overall experience been like? Maybe your favorite intern event or favorite part of the office, or favorite thing about MongoDB?
AC: The Speaker Series was really great. A panel of employees across all departments discuss their roles and teams and how they affect the company. From C-level execs, board members, new grads, and others, we get to see different perspectives on MongoDB.

In terms of favorite part of the office, that would be the cold brew coffee machine. It’s a daily habit of mine to wake up and grab coffee somewhere. But here I get to wake up, come to the office, grab a cold brew and start my day.

I also really like how everyone here is very approachable. I’ve shifted from originally only asking my mentor questions to now asking other people on other teams. I’ve gotten a lot more comfortable acting as a liaison and there’s more self direction on my project as well. It’s gone through some changes since I started it, and I have a lot of freedom to think about how I want to solve things.

AD: It seems like you’ve had a wonderful experience so far and that’s great to hear. What would you say to someone who might be interested in applying for an internship at MongoDB?
AC: It’s made very clear on day one that what you’re going to work on as an intern is important, and the coolest thing is that because MongoDB is open-source you can actually check. I have a friend who was an intern a few years ago and was able to work on the UI for Evergreen. He did a great job because not much has changed since and I think it’s a fantastic UI. MongoDB is a great company to ensure what you’re doing as an intern is important.

How DevOps, Microservices, and MongoDB are Making HSBC “Simpler, Better, and Faster”

A digital revolution is happening at HSBC. As one of the world's largest banking and financial services organizations, the company is building global digital solutions that will help customers worldwide to manage their personal and business finances. The drive for digital innovation comes as part of a series of strategic actions set out by HSBC’s board to adopt technology that makes HSBC “simpler, better and faster”. To achieve that goal HSBC has embraced agile ways of working. Technology teams are championing a DevOps culture and microservices design approach, while harnessing the next generation of technologies like MongoDB – which is helping HSBC to simplify, migrate and manage complex data change. Data is at the core of HSBC’s innovation. Nick Maybin, Development Manager, and Andrew Matthews, Equities Architect, HSBC, shared some powerful statistics in their “Bye Bye Legacy: Simplifying the Journey” session at this year’s MongoDB World conference. From data assets totaling 56PB in 2014, the HSBC team expects to see these grow to 93PB by the end of this year. One area of HSBC that is particularly data driven is the trading technology teams. As part of a collaborative initiative the trading teams in London are using MongoDB to build an Operational Data Store for trades to enable, equip and engage trading desks, salespeople and operations teams across the world, rapidly serving up data consistently and reliably from a single source of truth For example, the Operational Data Store will help users access data on complex markets like Equities and Fixed Income. This includes simple instruments like bonds and shares, but also many other types of more intricate products such as futures, forwards, options and derivatives trading. Previously this data would have been stored in relational databases, but in the quest to better serve users the team are migrating to MongoDB. The reasons align with the board’s goal of finding technology that would make HSBC simpler, better and faster: Simpler – Compared to relational tables, MongoDB’s document data model mean it is significantly simpler to model bonds, swaps and equity products. While each of these assets are instruments, they all need to store different attributes – something known as polymorphism. MongoDB’s flexible document data model makes it simple to manage this type of data variability. With a dynamic schema, it is also easier to make changes for new data types or for regulatory reasons. Finally, MongoDB makes life simpler for the Ops part of DevOps by providing high availability, scale and security, right out of the box. HSBC operates multiple data centers around the world. The existing relational databases required manual failover to recover service in the event of an outage – a process that is difficult to configure. MongoDB’s self-healing replica sets largely eliminate the complexity in creating a resilient, always-on database infrastructure. Better – HSBC’s Operational Data Store is being built with numerous microservices using native end-to-end JSON data structures that extend from the client, through to the apps, and the market data itself. The flexibility of MongoDB’s data model allows HSBC to manage complex data modeling better, including bitemporal data, providing a way of storing historical data across two separate timelines. Take a look at the slides to learn more about how the HSBC developers model bitemporal data with MongoDB. Faster – this is not just faster response times, but a perhaps even more important type of speed: organisational change. The Operational Data Store is demonstrating the value of adopting new technology and development processes. HSBC has a large DevOps Programme underway and application teams are changing their approaches, enabled by more flexible technologies. Shifting from traditional siloed teams, segregated by management hierarchy, into much more cross functional groups with self-sufficient, multi-disciplinary pods. All of which is helping the company move faster with a more entrepreneurial approach. Review the slides to learn more about the roles of technical staff, communicators, and influencers in driving technology change. HSBC believes the technology ideas of today, will be the intuitive habits of tomorrow. The trading teams’ migration away from relational databases, is another demonstration of how impactful that can be, with MongoDB enabling fast iteration for new applications and helping to support a shift in culture. It’s no surprise HSBC was a clear winner in this year’s MongoDB Innovation Award for Data Driven Business. To learn more about its journey to a data-driven business, take a look at HSBC’s talk: “Bye Bye Legacy: Simplifying the Journey” Download our whitepaper to learn more about how microservices are enabling modern application development.