I started to have slow queries today. My connections have gone up, though still under 30, and I do see constant network activity as well I think. I can post screen shots of my activity if that will help, I’m just not sure what to look for. As far as I can tell my issues correspond to the connections going from about 4 to 17. This may have nothing to do with it but that’s what jumped out at me.

Thanks for any ideas

I did some more searching and saw some things saying maybe I hit a download limit and its being throttled. So I moved the data to a new DB and seems to be back to normal. Connections are the same even though I only have 1 connection that should be active. Could the node driver make a difference in performance?

Hi Justus - Welcome to the community

I did some more searching and saw some things saying maybe I hit a download limit and its being throttled. So I moved the data to a new DB and seems to be back to normal.

Do you have more details regarding your cluster tier or the limit you’re referring to? I presume it would be related to the Atlas M0 (Free Cluster), M2, and M5 Limitations but correct me if I am wrong here.

Connections are the same even though I only have 1 connection that should be active. Could the node driver make a difference in performance?

Could you clarify what the context here is in terms of performance? Are you referring to the connection count? Most MongoDB drivers use connection pools to manage database requests so connections do not overwhelm server resources and established connections can be reused.

To answer your questions, I do have a M0 cluster, but I have never experienced this kinda of sluggishness some results taking 30 seconds plus.

I was just throwing ideas out there about the driver being the issue, but I have no evidence of that. Maybe these screen shots can shed some light.

I uploaded an image of the last 48 hour or so when the DB started being very slow.
(I cant upload all the images I have as a new user) To me these seem like smaller but it the lag was very high.

I use to use connection incorrectly and exceeded the maximum connections, but since fixing that code I haven’t had issues until now. I don’t have great understand of the metrics and what they should mean for performance, that’s why I mention connections since that’s the only known issue I have had.

I was making more write than before with some new code, but that had been running a week or so and didn’t seem to cause issues. I also started making a React site that might have been using my API to access the DB a little more than I thought. The only reason I not sure that’s the case because even after disabling all that code I continued to have very bad performance.
I hope this can help with coming up with a solution or at least figure out my problem. 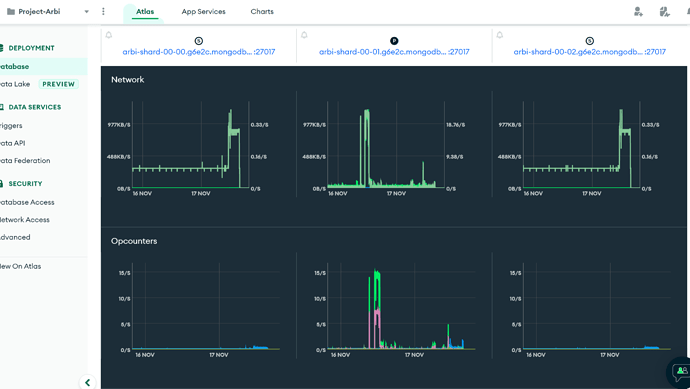 Thanks for providing those details Justus.

I was making more write than before with some new code, but that had been running a week or so and didn’t seem to cause issues.

As per the limitations documentation currently M0 free clusters and M2/M5 shared clusters limit the total data transferred into or out of the cluster in a rolling seven-day period. Specifically for M0 this limit is 10 GB in and 10 GB out per period. The limit itself noted here is for the cluster as a whole as well. This means that if the total sum of network data transferred for all nodes exceeds the limit, then the throttling will occur.

One of the key point here is that the limit is based off a rolling seven-day period.

So I moved the data to a new DB and seems to be back to normal.

I understand that you’ve moved from one cluster to another in which the issue was resolved. If you encounter this again on the new cluster, I would recommend contacting the Atlas support team via the in-app chat to see if they are able to confirm if you’ve past that particular limit.

@Jason_Tran Thanks for the advice. I didn’t know I had that support option at this tier so that would great. I didn’t see any alerts triggered like I got for the connection before so I didn’t think i would get throttled I guess. I will probably try to reach out and see if they can tell me what might have happened anyway.

No problem Justus - As per the Get help with Atlas docs:

MongoDB Atlas offers several packages to support your organization or project. Atlas includes a free Basic support plan, or you can upgrade to a paid plan for extended support services. Details on support plans are available through the UI as part of the procedure to change your support plan or by contacting MongoDB.

All the best,
Jason