On the 15th of November we held our first ever MongoDB Europe event. Over 1000 attendees were present for a day focussed on content for MongoDB DBAs, DevOps, and developer personnel. 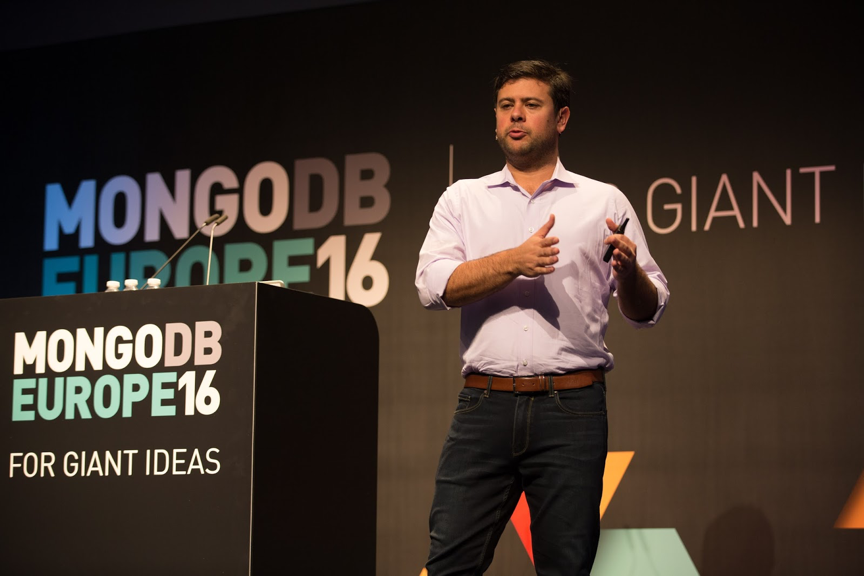 Eliot Horowitz, our CTO, opened the technical sessions with a keynote on the MongoDB 3.4 release which entered into general availability on the 29th November, 2016. 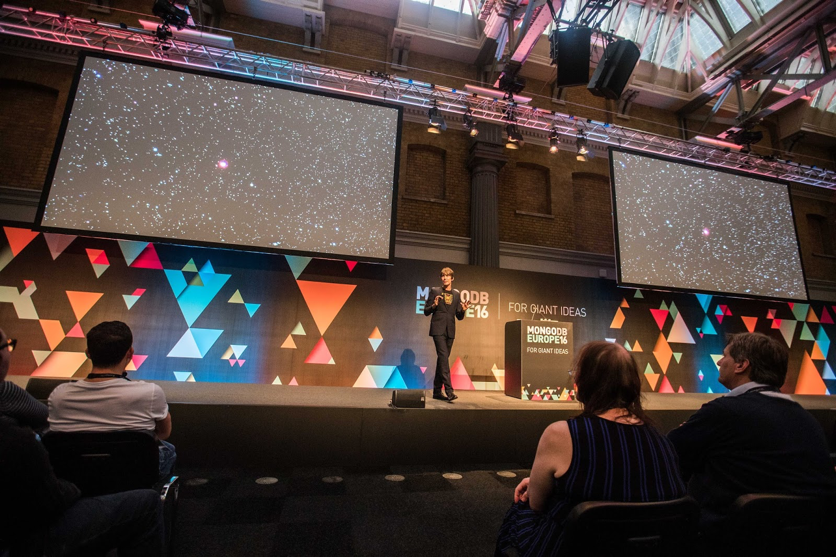 Professor [Brian Cox](https://en.wikipedia.org/wiki/Brian_Cox_(physicist) followed with the ultimate big data presentation, talking about the Big Bang and what the Sloan Digital Sky Survey can tell us about the origins of the universe. Brian’s presentation set the tone for the show, which centered on the giant ideas of MongoDB users.

We ran three “shards” – or streams of talks – throughout the day. Amazing customer sessions from Amadeus, SNCF, and Proximus, combined with highly technical talks on subjects like the Wired Tiger Storage engine, Blockchain, and how to build highly resilient MongoDB applications, all contributed to a high level of learning for all in attendance.

The show was packed all day long, with attendees mingling in the exhibition hall between talks. 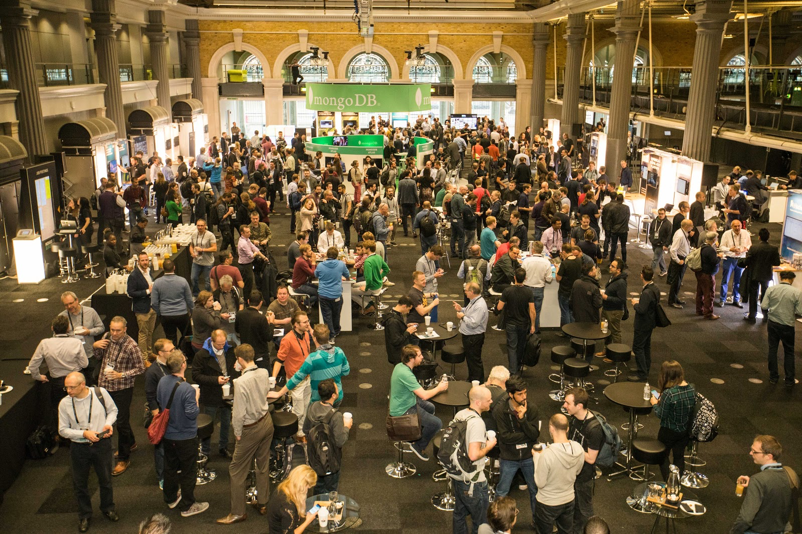 We ran a ping pong ladder all day and our CEO Dev Ittycheria graciously agreed to play the winner. Dev is a bit of a demon on the ping pong table, so our ladder winner had to be content with a runner’s up prize. 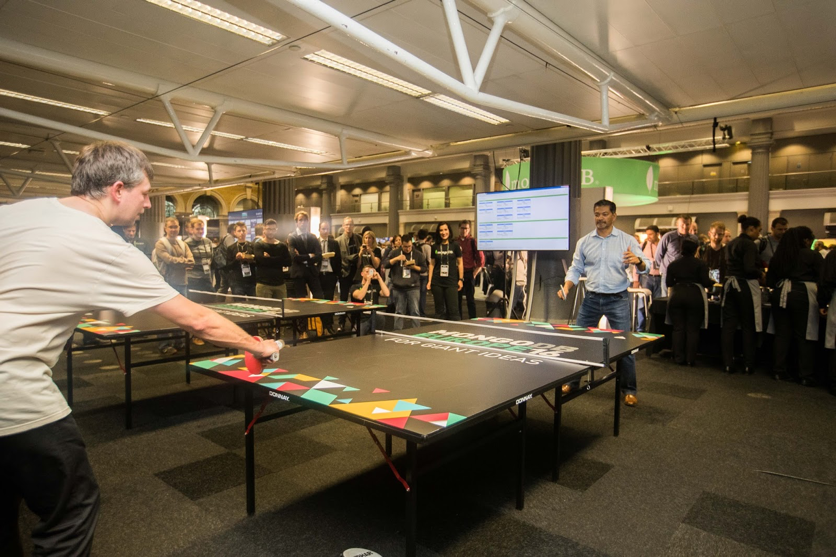 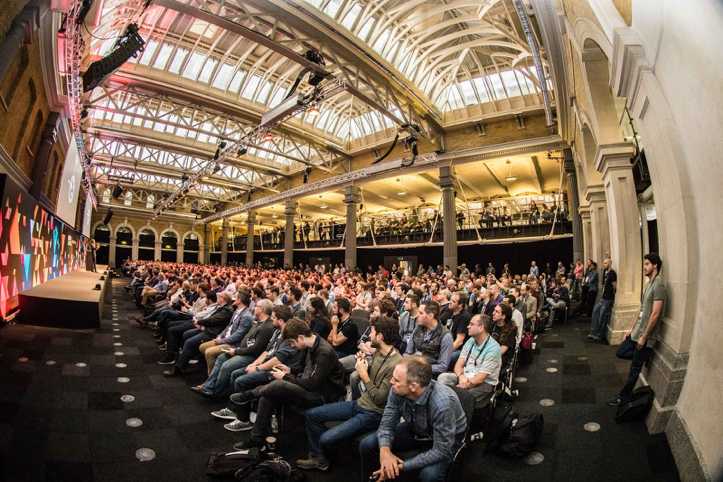 The Closing Keynote from Eliot Horowitz

We’d especially like to thank all of our Sponsors, who helped make the day so successful. 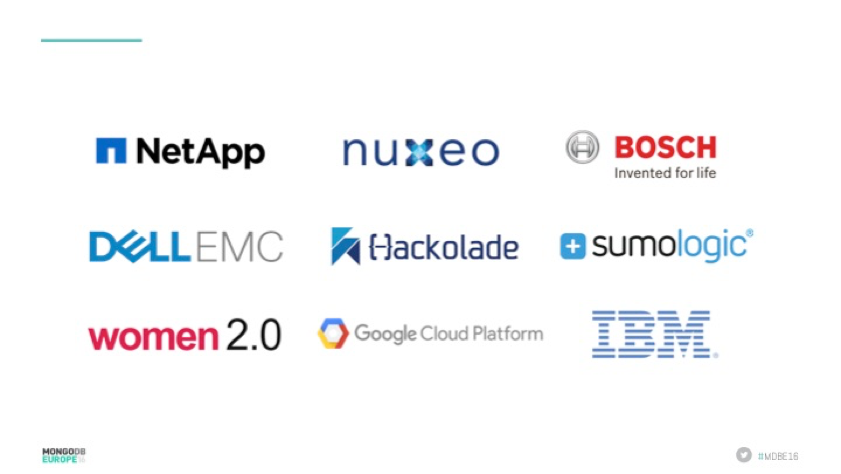 What did we learn from our first MongoDB Europe event? The feedback overall was that it was a very successful event. The one consistent stream of constructive feedback was “make it even more technical.” As long as you are up for the challenge, so are are we.

Registration is open for MongoDB World 2017:

Questions we got at AWS re:Invent

Last week, the MongoDB team had the pleasure of attending the world’s foremost cloud computing conference. At AWS re:Invent in Las Vegas, we heard our CTO explain how Thermo Fisher reduced mass spectrometry experiment times from days to minutes , we announced the general availability of MongoDB 3.4 , and we formally introduced MongoDB Atlas to the AWS community. Here are some of the most popular questions we were asked last week: “I’m new to cloud technology. Tell me…” Where does my application server live and where does my database live? Depending on your architecture, your app server may run on a different machine or in a different data center. For most applications, latency can be significantly reduced by spinning up your app server and database in regions closest to your user traffic. For example, MongoDB Atlas can currently run in any of 4 supported Amazon regions, with more being added soon! What’s the easiest way to migrate to the cloud? As Amazon dramatically revealed in their keynote this year, cloud migration is a very hot topic. Short of uploading all of your data to an Amazon 18-wheeler, there are many options for migration. Depending on your availability requirements, this can be as simple as creating a copy of your data in the cloud and re-routing traffic to the cloud-hosted database . For more mission critical deployments, migration can be achieved with no downtime. We also provide tailored consulting services to help you create a migration path . “I’m new to MongoDB. Can you explain…” What are secondary indexes and how do I use them? Indexes are powerful tools that let you significantly improve query performance by avoiding full collection scans. Secondary indexes can be added to highly-queried fields (or sets of fields) to extend these performance gains to additional queries, aggregations, or sorts. Adding too many indexes can unnecessarily harm read/write performance, so we recommending using MongoDB Compass to identify which indexes are being used and where additional indexes would be most beneficial. What are the benefits of MongoDB’s native aggregation functionality? MongoDB’s aggregation framework gives you the capability to run advanced analytics processing right inside the database, rather than in your application. Since MongoDB 2.2, the aggregation framework has been significantly expanded to include many of the rich aggregation features you’d expect from a relational database. Does MongoDB offer support? Yes. Creating a MongoDB Atlas account means you have access to assistance with the UI and support for any connectivity issues. You also have our global site reliability engineering team focused on monitoring and ensuring availability of the service. For support of the underlying database software, we recommend a MongoDB Enterprise Advanced or MongoDB Professional subscription. We also offer a subscription designed specifically for MongoDB Atlas customers. These subscriptions include access to our support engineers 24 hours a day, 365 days a year. Our support team not only helps you troubleshoot specific questions, but can also guide you through upgrades and suggest optimizations. Support plans are also available for applications in development. Learn more about MongoDB support . “MongoDB Atlas looks great! Tell me more about…” How secure is MongoDB Atlas? Is my data encrypted? MongoDB Atlas is secure by default. Each MongoDB Atlas group is provisioned into its own AWS Virtual Private Cloud, isolating your data and underlying systems from other MongoDB Atlas users. You can even directly peer your MongoDB Atlas VPC with your application servers deployed to AWS using private IP addresses. We also configure network encryption and access control by default, and IP whitelists (enforced with AWS Security Groups) let you limit access to a specific range of IP addresses. MongoDB engineers automatically apply security patches as soon as they are released. Finally, you can elect to encrypt your storage volumes at no additional cost using using AWS's encrypted EBS volumes. How does MongoDB Atlas handle backups? Backups can be configured optionally and are billed by the size of the data being backed up. Backups in MongoDB Atlas are continuous and maintained seconds behind the production cluster, meaning you can conduct point-in-time restores. MongoDB Atlas backups are stored in MongoDB’s private data centers for added redundancy. “I’m thinking about using DynamoDB…” How does MongoDB Atlas compare? There are a few features in MongoDB Atlas that our users find valuable: Rich query language: The MongoDB Query language gives you the querying capabilities you’d expect from a SQL-based database with the flexibility and performance of NoSQL. Native aggregation: MongoDB’s aggregation framework gives you the capability to run advanced analytics processing right inside the database, rather than in your application. Secondary indexing support: Support for secondary indexes allows you to extend the performance gains of traditional indexing to additional fields or field sets. Robust tooling: MongoDB was released in 2009 and, in addition to the vast ecosystem of tooling that lets you support, monitor, and visualize your deployment with confidence, MongoDB Atlas is built using the expertise gained from years of building enterprise-grade products for the most complex, mission critical deployments. Choice of infrastructure vendor (coming soon!): With upcoming support for Google Cloud Platform and Microsoft Azure, you’ll be able to choose where your deployment lives based on your app requirements. “I’m currently using a 3rd party hosted MongoDB service...” How does MongoDB Atlas compare? MongoDB Atlas is built and supported by the team who builds the database. This means you get access to the latest security patches, major releases, and features when they’re released—not a year later! MongoDB Atlas is also the most cost-effective way to run MongoDB 3.2 or 3.4 with our WiredTiger storage engine. With hourly billing and independently-tuneable memory, storage size, and disk I/O, you only pay for what you need. All MongoDB Atlas clusters are hosted in isolated, secure VPCs which mean you aren’t sharing bandwidth with other databases within the same virtual machine. -- Download MongoDB Atlas Best Practice Guide