We place a tremendous value on community engagement at MongoDB, specifically around working with you on your toughest technical problems. We created the William Zola Award for Community Excellence to honor those whose support contributions make a significant difference to users around the globe.

Our inaugural recipient of the Zola award had multiple nominations from community members who were impressed with this contributor’s enthusiasm, knowledge, passion, and patience.

A well known MongoDB speaker, trainer, and consultant in the SoCal area, since 2012 this community champion has:

"He has deep knowledge of MongoDB, and enjoys sharing that knowledge with everyone. He seems to always have solid, well-balanced answers for all of the audience questions."

For these reasons, we are pleased to announce Nuri Halperin as the the inaugural winner of the Zola award.

MongoDB co-founder and CTO Eliot Horowitz presented Nuri with the award at our annual user conference in San Francisco. 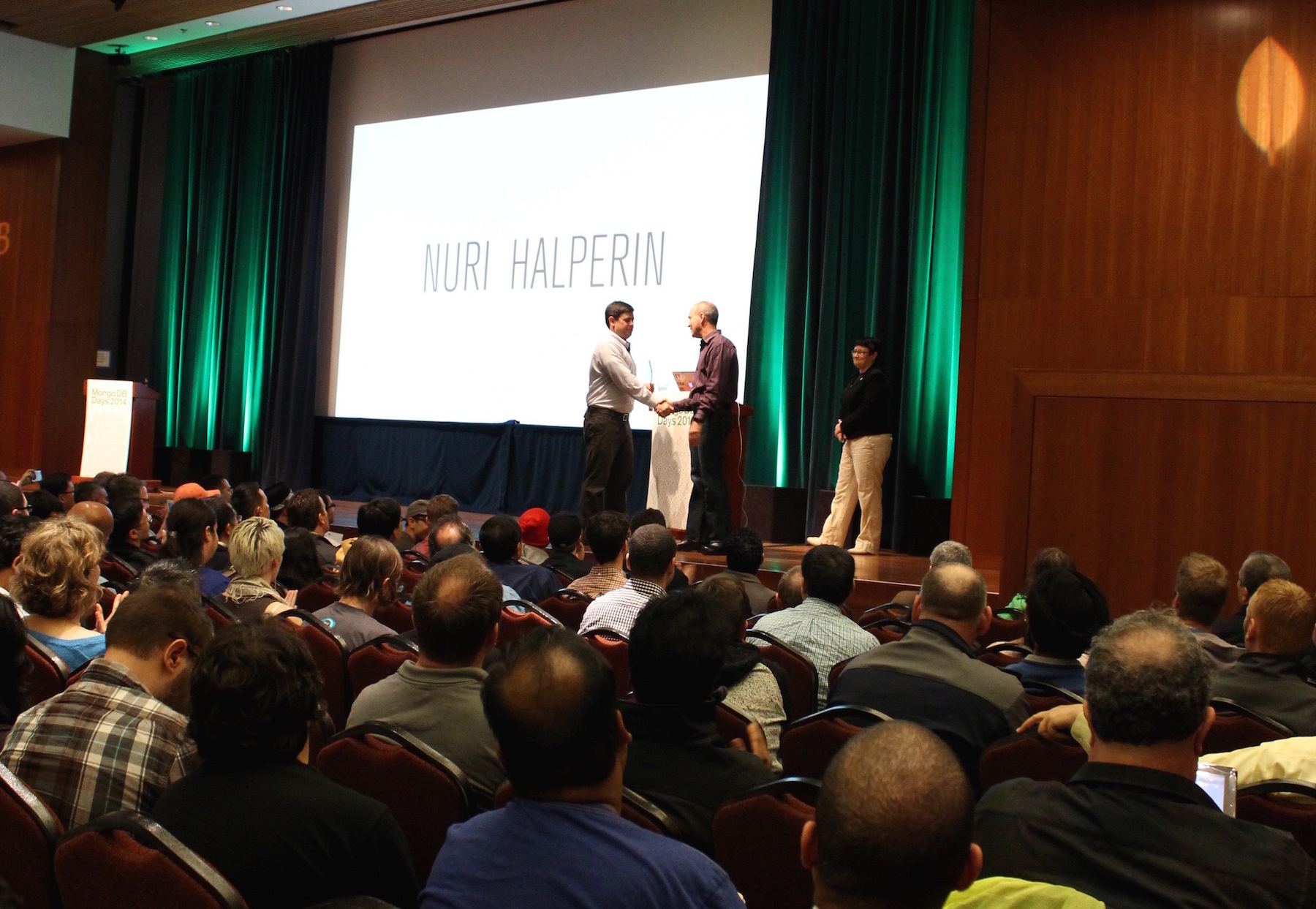 Thanks to Nuri for his exemplary contributions! For more information on how you can get involved with the MongoDB community, please see our guide on how to Contribute to the MongoDB project.

Glassdoor Employees’ Choice Award 2015: MongoDB Recognized as One of the Best Places to Work

MongoDB is best known as the next-generation database that helps businesses transform their industries by harnessing the power of data. Yet, less is known about the unique culture and environment we’ve built … until now. Today, MongoDB was recognized as one of the Best Places to Work in Glassdoor’s 2015 Employees’ Choice Awards for medium-sized businesses under 1,000 employees . Over the past year, current and former employees have shared their experiences and opinions on Glassdoor , a popular career community that enables people to find jobs, and companies to recruit top talent. MongoDB is described as having, “Smart people who are on a mission and they have fun along the way” and “Amazing people, everyone is super smart, hard working, and very passionate about MongoDB.” Reviewers were asked to review the Company in five ways: Rate the Company out of five stars Provide pros, cons, and advice to management Recommend to a friend? Company outlook Approve of CEO? There are many factors that have an impact on one’s work environment. In our rapidly expanding business, change is a constant. This year we welcomed a new CEO, our employee population grew significantly and we launched a number of exciting new functionalities for the database. Throughout these changes, the passion and excitement for our community, customers and product remain strong. It is this passion that motivates us to continually look for new ways to ensure that we hire and retain the right talent and keep them engaged and challenged. We understand perks and benefits are essential, and of course, we pride ourselves on how we take care of our employees, but ultimately these are only vehicles to attract talent, not keep it. At the end of the day, each individual has different priorities - for some it’s getting code pushed into production and for others it might be seeing a wild idea brought to fruition. To achieve this, they want a manager who listens to their thoughts, an executive who will take a chance challenging the status quo, and colleagues who, after a busy day, will decompress with you over a game of pool in the cafe. Our team wholeheartedly believes this and lives it everyday. Our co-founder Dwight Merriman said it best when he laid out his vision for creating a culture of engagement earlier this year . Crucially, he pointed out that “Your company won’t go anywhere unless you recruit and retain the right team. This should be your top priority.” The award from Glassdoor is vindication that this focus on culture has proved a fantastic success - not only for the company’s business goals but also for each individual that works here. Now if you’d like to find out what all the fuss is for yourself, well, we are hiring: http://www.mongodb.com/careers/positions