We’ve released several new versions of MongoDB Compass in the past few months, and we’re excited about the new features that we’ve introduced. Read on for details or download the latest version here.

If you’re new to Compass, the best way to learn to use it is with the free online tutorial: M001: MongoDB Basics. In this series of online videos and hands-on exercises, you will use Compass to explore MongoDB data models, learn the MongoDB query language, and deploy and connect to MongoDB clusters in Atlas, MongoDB's fully managed cloud service.

Compass plugins: choose your own adventure

With the introduction of a new plugin API, MongoDB Compass is fully extensible. From examining database users and roles to generating sample data, from viewing GridFS files to checking sharding status – if there’s a specific feature you need that’s not yet available in Compass, you can build a plugin for it. And if you need it, it might be useful to others as well! Plugins can be shared with the community and added to any build of Compass 1.11 or later.

You can learn more about creating plugins for Compass here or work through a tutorial to build an example plugin.

Documents can now be viewed and edited easily in a new table view, which allows for a quick visual comparison between records: 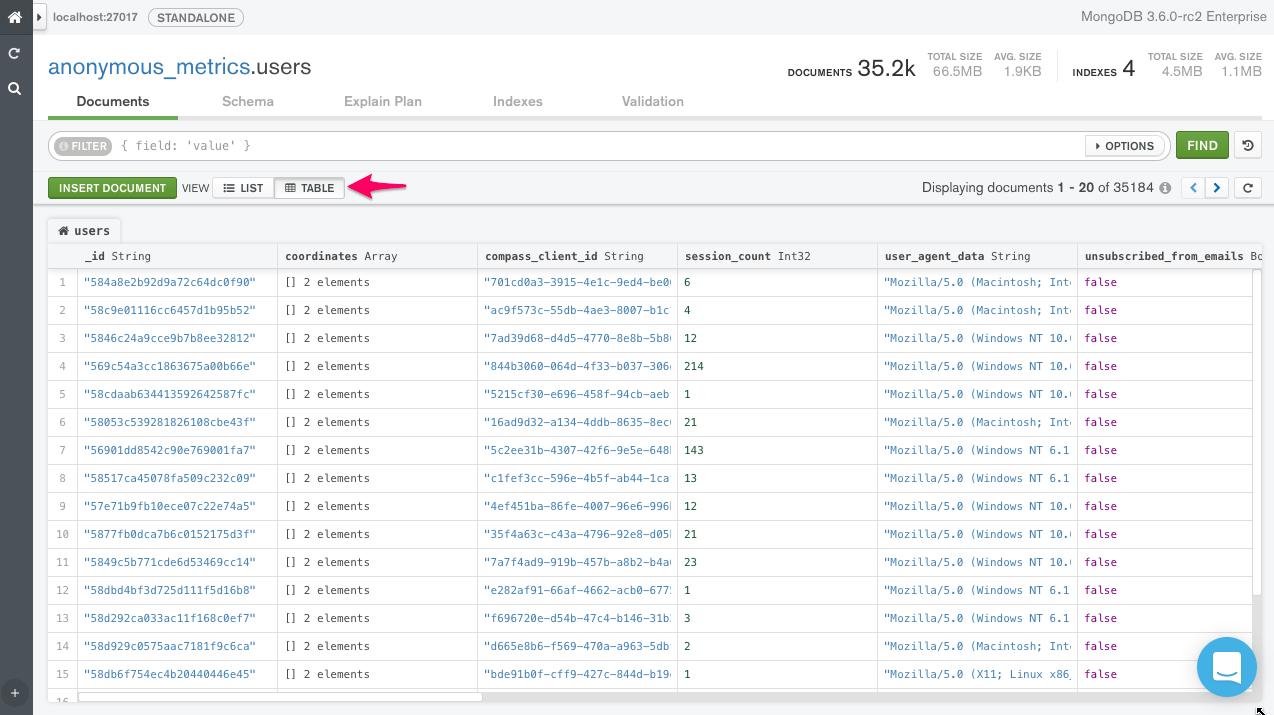 We added x.509 support so our customers now have full coverage of auth options when it comes to connecting to production deployments of MongoDB. (Authentication options already include username/password, Kerberos, and LDAP.) 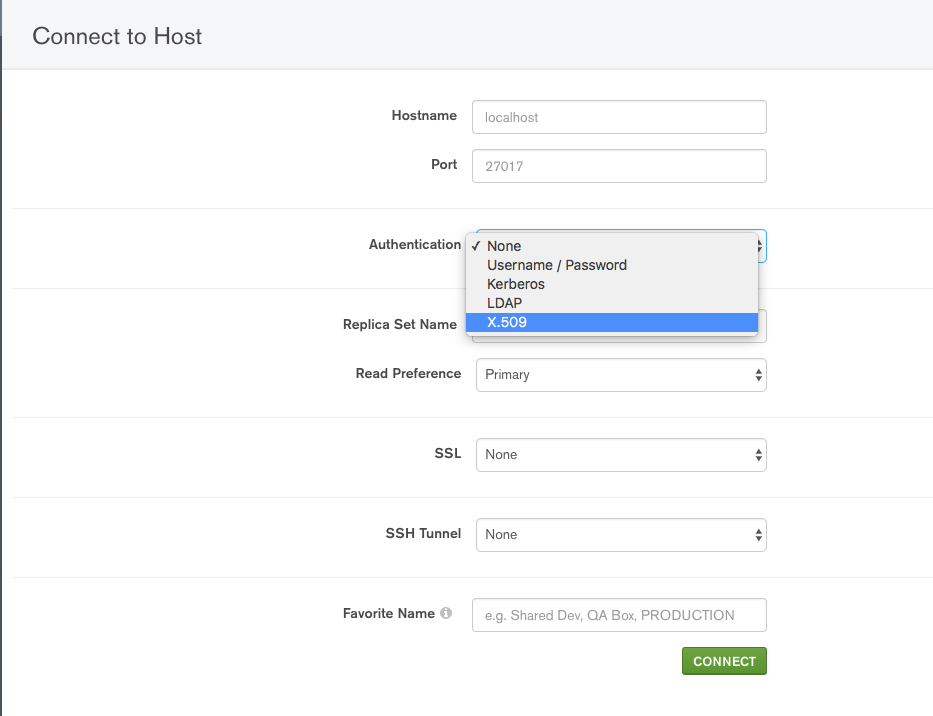 Type queries faster and store them for later

Typing queries became quicker and easier with an intelligent autocomplete bar that matches brackets and completes field names for you. There’s also a new button for query history: use it to review queries you’ve run, run them again, or save common queries as favorites. 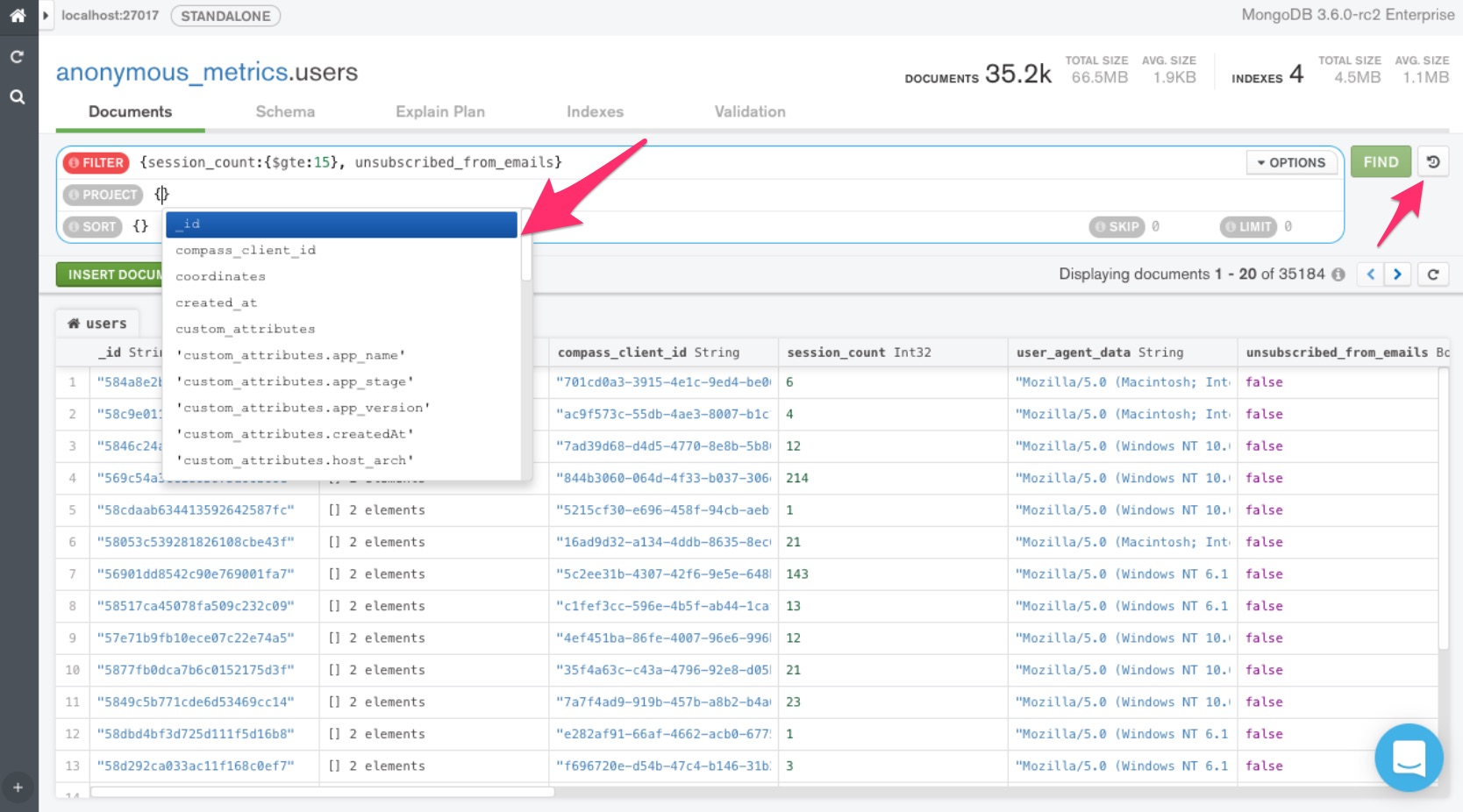 With the launch of MongoDB 3.6, we introduced a new distribution called Compass Community, which contains a subset of Compass functionality, but doesn’t require a paid subscription to use in production. Compass Community has the core building blocks you need to get started with MongoDB: CRUD, indexes, explain plans, along with the new plug-in API.

You can get Compass Community from the download center. It also comes as one of the components of the MongoDB Community Server download.

If you want to view your data with Compass but don’t need to edit it (or allow other developers to edit it!), you have a new option: a read-only build of Compass. No need to stress about unintended edits with this version, now available in the download center.

We hope you enjoy this latest release!

Introduction Heroku and MongoDB Atlas are the perfect fit for modern, cloud-based app development and deployment. Since its inception in 2007, Heroku has been a PaaS (Platform-as-a-Service) favorite of developer and operations teams thanks to its tight integration to CI tools and ease of app deployment. MongoDB is also a long-time favorite of developers who value increasing their productivity and decreasing application development cycles. MongoDB’s fully managed DBaaS (Database-as-a-Service), Atlas , is also popular among cloud DevOps teams, who are naturally demanding a strong integration between Heroku and MongoDB Atlas. Today, we are happy to present a tutorial showcasing how to securely integrate Heroku with MongoDB Atlas. Protecting your cloud data assets with MongoDB Atlas MongoDB Atlas provides industry-grade, out-of-the-box security controls: encrypted data in-flight and at-rest, encrypted backups, authentication enabled by default, IP whitelisting and VPC Peering (with customer-owned AWS accounts) are strong safeguards MongoDB provides its users to ensure their data is safe in the cloud. Companies hosting their MongoDB Atlas-backed applications on Heroku typically require that their data be only accessed by their applications. This has proved to be challenging in most Heroku deployments, which typically don’t offer guarantees that requests performed by their hosted applications originate from fixed IPs or a fixed range of IPs (defined as CIDR blocks). With Heroku Private Spaces however, companies can combine Heroku powerful developer experience with enterprise-grade secure network topologies. More specifically, peering a Heroku Private Space with a MongoDB Atlas cluster running in AWS is a straightforward option to secure the communication between a Heroku-deployed application and a MongoDB Atlas database, by using MongoDB Atlas VPC Peering capabilities . The tutorial below goes through the specific steps required to link a Heroku Private Space with a MongoDB Atlas project. Initiating the VPC Peering request The first step is to initiate the VPC Peering request on the Atlas side. To do so, it’s necessary to retrieve a few parameters from the Heroku Private Space, by using the Heroku CLI . After logging in with an account having access to a Private Space, use the spaces:peering:info command to retrieve the AWS information required by MongoDB Atlas: heroku spaces:peering:info <your_private_space_name> In the screenshot above, I chose to use a Private Space hosted in the us-west-2 AWS region (aptly prefixed "oregon-*"), since my M10 MongoDB Atlas cluster is also deployed in that region. Copy the AWS Account ID , AWS Region , AWS VPC ID and AWS VPC CIDR values from the Heroku console above. Now, head over the MongoDB Atlas website and navigate to the Security tab of your cluster (M10 or above and in the same region as your Heroku Private Space). Select the +New Peering Connection button and fill out the form with the values you previously copied: Press the Initiate Peering button, and verify that the VPC Peering request appears in Atlas’ VPC Peering list (with a "Waiting for Approval" status): Approving the VPC Peering request Now that the VPC Peering request has been initiated on the MongoDB Atlas side, let’s approve it on the Heroku side. In the Heroku console, the following command should display the request we just created in MongoDB Atlas: heroku spaces:peerings <your_private_space_name> Take note of the PCX ID value of your VPC Peering ID and pass it to Heroku space:peerings:accept command: heroku spaces:peerings:accept <your_PCX_ID> --space <your_private_space_name> Verifying that VPC Peering works The first step to verify that VPC Peering has been properly set up between your Heroku Private Space and MongoDB Atlas is by running the following Heroku command again: heroku spaces:peerings <your_private_space_name> The peering connection should now appear as active. In MongoDB Atlas, the peering connection should now also appear as available: The next verification step would be to run an Heroku-deployed app connected to your MongoDB Atlas cluster and verify that you can read from or write to it. For instance, you could clone this GitHub repository , customize its config.js file with your MongoDB Atlas connection string, and deploy its atlas-test branch to your Heroku Private Space using Heroku GitHub Deploys . Since Heroku automatically runs npm start for each Node-detected app, it will keep calling the produce.js script. As a result, documents should be created in the devices collection of a demo database in your Atlas cluster (if it doesn’t, I recommend that you first verify that the CIDR block of your Heroku Private Space is present in the IP Whitelist of your MongoDB Atlas cluster). Next steps I hope that you found this Heroku-MongoDB Atlas integration tutorial useful. As next steps, I recommend the following: Sign up for MongoDB Atlas if you don’t already use it. Watch a VPC Peering video tutorial with MongoDB Atlas. Get more familiar with MongoDB Atlas documentation Contact Heroku if you don’t already have access to a Private Space. Explore the Heroku Private Spaces documentation . About the Author - Raphael Londner Raphael Londner is a Principal Developer Advocate at MongoDB, focused on cloud technologies such as Amazon Web Services, Microsoft Azure and Google Cloud Engine. Previously he was a developer advocate at Okta as well as a startup entrepreneur in the identity management space. You can follow him on Twitter at @rlondner