This is regarding VSC extension and whether it is possible to add the MongoDB Shell to the terminal options along side (Powershell, CMD and Git Bash for example), in such a way that if I am currently connected to a MongoDB database, it would allow me instantly duplicate a connection.

Much in the same way the MongoDB: Launch MongoDB Shell, fires off a: -

Or even better, if I use the split option on a currently created connection, it would duplicate that connection. At the moment if I use WIN CTRL-SHIFT-5, it spawns off a powershell session, which isn’t what I would like.

If it’s possible already, then let me know. I have tried this within the integrated terminal settings for windows JSON: -

No joy, it comes back with a “The terminal process “mongo ‘$Env:MDB_CONNECTION_STRING’” failed to launch (exit code: 1).”

Also it would be useful if $ENV:MDB_CONNECTION_STRING was set/reset when a connection was made to the MongoDB database, and not when the MongoDB: Launch MongoDB Shell was instigated.

PS - How is the VSC extension coming along, it’s been a been a bit quiet on the enhancements lately.

PPS - Where do we put feature requests nowadays?

thank you for the feedback on this. I recommend adding this feature request to our feedback portal: https://feedback.mongodb.com/forums/929236-mongodb-for-vs-code.

There is, however a workaround for what you are trying to do. It sounds like your goal is to quickly open a new shell instance connected to the server/cluster the extension is currently connected to. A command for that is available in the command palette:

That means you can assign a keyboard shortcut to it and every time you use that shortcut, you’ll get a new shell instance.

I am curious: what do you do with multiple shell instances connected to the same cluster?

And yes, you are right. We have been pretty quiet on enhancements. We will probably do a bugfix release soon and probably a bigger one in a month or so.

The issue with the Launch new shell, is that it creates a new shell completely, not a split. I ideally don’t want to be going back and forth between integrated terminal views.

Sometimes I will want to look at data, while on another terminal session refine a query, or I want to check that the playground has given me the correct results, which it doesn’t always. Sometimes comes back with [ ] btw.

If I have the mongodb connections tab open, then I lose a right side (CTRL-B), and at the moment the schema analyze view in connections, isn’t as good as the compass one.

If I am at a terminal level, then I can spawn multiple terminal sessions quickly all nicely spaced. Looking at data via the connections tab (So not always a good space trade off), and fills up the screen with tabs. See screen shot.

I suppose it’s all about having options on how to work (The view below is on a 42" monitor so it’s a lot more readable than it seems). 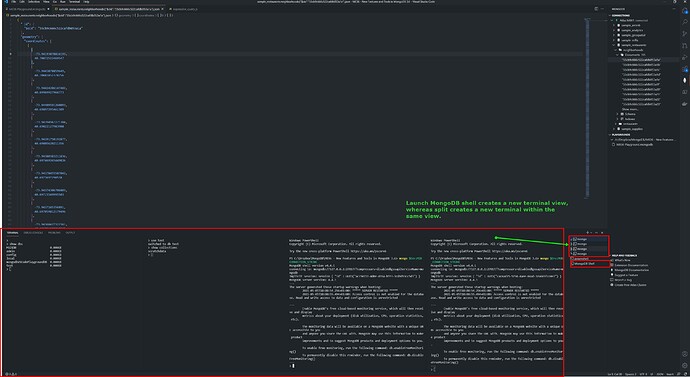 Oh by the way this link

Thank you for the feedback.

It wasn’t really moved from Github. At MongoDB, we use https://feedback.mongodb.com as a centralized repository of suggestions for all products and it easier for me if feature requests are submitted through that portal.

We know Github is friendlier but that portal give us a way to track things cross-product and cross-customer. What we’d often do when we get feature requests through Github issues is to move them over to the feedback portal, but that’s a manual process so they don’t always get moved over. We are looking to improve that process though.

Unfortunately, the feedback portal uses a 3rd party solution so the degree of customizability is limited.

It must have been free or a bolt on to another product.

I will just knock up suggestions in a text editor instead and paste it in the box going forward, though the limit on images is a bit of a challenge.

Do you know what the restrictions are, since it may be worth mentioning them on the page e.g. size, image type, documents types allowed etc.