There are 2 things that I would like to have clarified:

Thanks so much if you can help explain the above, and then we can maybe talk about fixing the types

I inserted a refrence screenshot here: 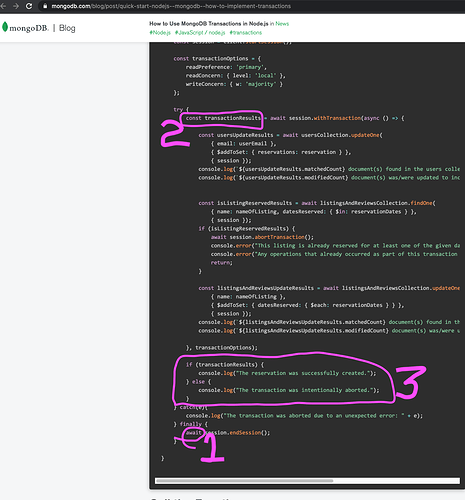 Happy to hear you’re trying out the tutorial, but it’s a bummer it’s not working for you! I don’t know Typescript, so, unfortunately, I can’t personally offer much help there. Let me reach out to the Node drivers team, and see if we can get some answers on your first two questions.

For question 3 - Let me see if I can describe it in a different way:

Ok, it might be a typings issue, because according to typescript withTransaction is void

. I actually found this commit in the types repo, where there seems to be a types fix for both the return value and await (question 1 + 2).

Thanks for explaining question 3. So if we do throw new Errror('I was aborted') on the else case in your reply --> all errors will then be handled in the catch?

This is pretty important to me, because when we utilize transactions, I’m mostly interested in knowing if it suceeded or not

Yes, if you throw an Error in the else { }, the catch() { } will catch it. So then any transaction that was intentionally aborted using abortTransaction() or aborted due to an unexpected error will be caught by the catch() {}.

Thanks for taking a close look at our transaction tutorial. I see there’s a bit of confusion between the community types and our actual functionality. Luckily the examples from the article are accurate as Lauren has clarified withTransaction returns a command result if the transaction was successful and returns nothing or undefined if the transaction was intentionally aborted.

I’ve created a ticket for us (NODE-3278) to clarify the return types and add some more descriptive notes to these transaction functions in our documentation.

Something to look forward to is our next major release, coming soon, is written in Typescript and we hope that it will offer high quality and accurate type information. It’s not yet production ready yet but you can check out the beta here if that is of interest.

I can’t emphasize how important the change to typescript is. We are using a bunch of libraries in our application, and it’s always a big relief when typings are officially supported. It’s the first entry-point of documentation

Thanks for sharing the links, and our team is looking very much forward to the release written in Typescript with accurate type information