I have a Realm app with quite a number of functions. I recently started creating some subdirectories (which I understand is a relatively new feature). Creating the subdirectories through the UI works fine - however, when I try and sync back to GitHub, all the sub directories disappear from the UI - although they are present in GitHub.

It took me a while to track the problem down as I originally created the function for a https end-point and when syncing from GitHub I got a message in the Deployment status field saying “Failed: failed to import app: unable to find function: …”

anyone else getting this or know of any workarounds?

I’m not sure what you mean by this.
Could you please provide a screenshot?

The article below states that subdirectories under /functions will not be recognised.

thank you for your response; apologies, if I didn’t explain too well. I see from the link you provided (which I hadn’t seen before) that “All of your function source code files must be in the /functions directory. Realm does not recognize functions nested in subdirectories of /functions .”

However, it also says here:

“You can define functions inside of nested folders. Function names are slash-separated paths, so a function named utils/add maps to functions/utils/add.js in the app’s configuration files.”

Hi @Tyler_Collins, Looks like there is a “ticket” for this in the MongoDB Feedback website: You can vote for it but I’ll also surface this topic to the Realm team! I think it’s a good idea! Cheers, Maxime.

which says the sub folders work and as per the screenshot I can quite easily create a function in a sub folder from the UI and reference it in a function call. 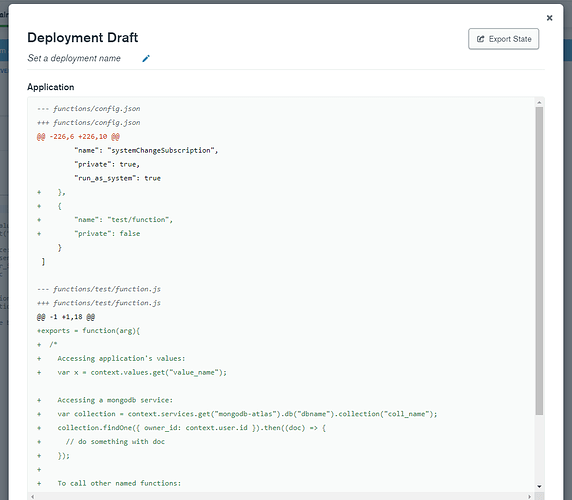 It looks like the feature has only been part implemented. Is it possible to get a ticket raised to finish the feature off so that it works with GitHub and make the documentation consistent? The danger is that someone creates a bunch of functions in sub-folders via the UI and then tries to sync with GitHub only to lose everything.

Thanks for providing a link to the documentation.
The article I referred to seems to be outdated and I will bring this to the attention of our docs team.

Unfortunately I did not see a potential workaround in this workflow to get around this issue but I have raised this with our Realm team to be investigated and will update this thread if there’s any progress.

Many thanks for your investigation and raising it with the team internally.

Any updates would be much appreciated.

Is there any update on this issue?

There is no update on this yet.