Let’s say I have a machine inside my private network, behind a Firewall with all traffic to the Internet Restricted.
What Hosts/Ports do I need to allow so an App can connect to my MongoDB Serverless Instance?

Currently I have an Instance in “AWS / us-east-1” and I can’t reach it from a server inside our Network, I’m being asked to provide Host & Port to whitelist. Initially I took the name from the connection string.

However it didn’t work. I’ve read that for clusters you need the lists of clusters but for Serverless I don’t think it’s the same. As I said, all I know is that the region is "“AWS / us-east-1”. Thanks in advance.

Hi @Cristopher_Rosales - Welcome to the community!

In a typical server environment where the topology / architecture is more static / predictable, the adding of hosts or servers to a whitelist will generally work for your use case stated. However, serverless doesn’t currently provide the capability for you to “whitelist” a server / host. This is because in a serverless environment, the situation is a lot more dynamic, where resources are constantly added and removed according to your needs. Thus, the same method that works in a server environment won’t necessarily work the same way (or at all) in a serverless environment.

Having said that, if it suits your use case, please consider setting up a private endpoint for connectivity to serverless instances: 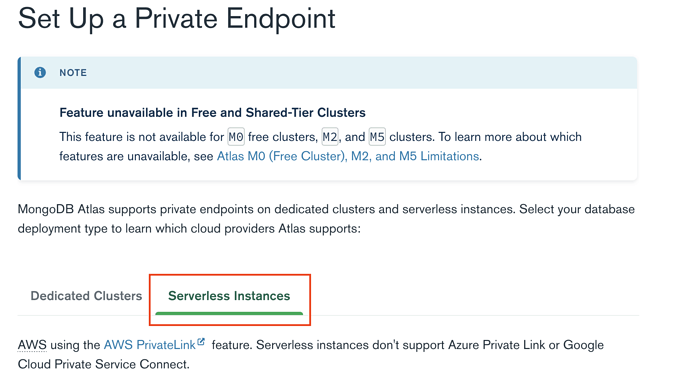